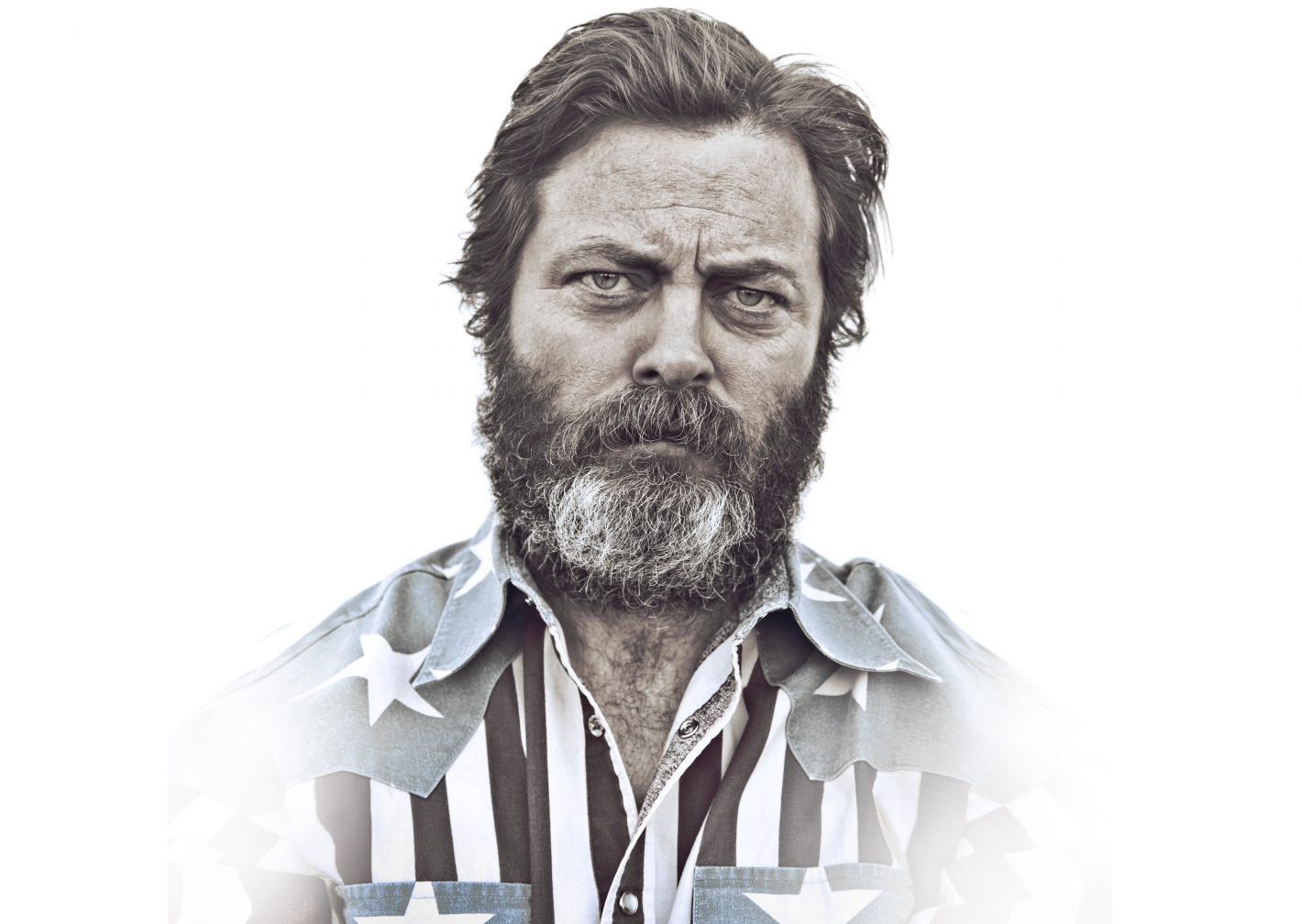 In an era where ubiquitousness is as necessary for an entertainer as actually being talented, a guy like Nick Offerman has a lot going for him all at once. The beloved, deadpan, multidisciplinary actor has parlayed his post-Parks and Recreation role as the now-iconic Ron Swanson into a rollercoaster of film gigs (his portrayal of Dick McDonald in The Founder was exceptional), multiple viral video campaigns (have you seen the yule log video of a silent Offerman drinking whiskey in front of a fireplace for 45 minutes?) and a steady stream of live performances with and without his wife Megan Mullally of Will and Grace fame.

Despite that dizzying omnipresence, Offerman’s stranglehold on the pantheon of the uber-American male is anchored in a kind of modesty. Viewers of his Netflix special American Ham will remember Offerman’s steady barbs delivered with eloquent―if not raunchy―poise, always through a piercing, stoic gaze. As more of a one-man show than a stand-up comedy special, Offerman deals in hilarious folk-country ditties he’s written, expounding upon the voracity of his middle-aged sex life, and extolling the virtues of living a prosperous, handcrafted life away from the trappings of modern technology. His is a message of salvation from the ultra-progressive pathos, despite Offerman’s off-stage liberal leanings.

In short, Nick Offerman is probably the most likeable personality in the United States right now, and he seems to be enjoying every second of it. He’s also somehow still able to spend most of his time woodworking at his East Los Angeles woodworker’s collective, the Offerman Woodshop.

Offerman’s well-known affinity for working with his hands is even being utilized for an upcoming NBC reality competition series dubbed The Handmade Project, in a reunion with with Parks and Recreation star Amy Poehler.

And things don’t appear to be slowing down anytime soon. On May 19, 2017, Epix will air a recording of one of Offerman and Mullally’s performances from their 2016 tour, Summer of 69: No Apostrophe. Offerman and Mullally also recently obtained the film rights to the best-selling George Saunders book Lincoln in the Bardo, after Offerman was part of the narration team for the audiobook.

When Submerge caught up with Offerman, he was in the passenger’s seat with his dad at the wheel, driving from Kalamazoo, Michigan, to Milwaukee, Wisconsin, for a gig. The two turned the Midwest dates into a father-son road trip, and if that doesn’t convince you of the Offerman appeal, then I just don’t know what more to say. Offerman will headline Cap City Comedy’s Weekend of Unlimited Laughs along with David Koechner (Saturday Night Live, Anchorman) Sunday, April 23, 2017, at Memorial Auditorium.

So you and your dad are doing the traditional road trip kind of thing? Stopping in little towns and stuff?
Yeah, I have a show tonight, so Dad had a beer for lunch and he let me have one sip of it. It was an Irish stout, and it was the highlight of my day so far.

Last year you were touring the country with your wife Megan Mullally on the Summer of 69: No Apostrophe show, and I understand your show in Sacramento is solo. Could you talk a bit about the pros and cons of performing solo as opposed to performing with another person—especially your wife—on stage in a comedy show.
It depends on who you can get to be your other person. In my case, my other person is incredibly beautiful and sings better than any angel I’ve heard. That takes a great deal of pressure off of me. Many people have seen our show together and were surprised to hear I was on stage with her. That’s preferable. When I’m alone, there’s a lot more onus on me to entertain the crowd and carry the show. So Megan and I, we’re kind of like an old-fashioned showbiz couple, where we have a great rapport between us, and we sing a lot of songs together. When I’m alone I get more personal, where it’s my own singular philosophy, morphed into a sense of humor, interlaced with much more mediocre-sounding music.

Submerge covers a lot of music, locally and nationally, and with music being a big part of your performances, I wondered what you most enjoy listening to that maybe people may not expect? I know you’re a big fan of Wilco …
My dad used to listen to this radio station when I was a kid called WJJB, and they played old oldies from the ‘30s and ‘40s. Being down in his basement shop, where the wood stove also was, it gives me very warm memories connecting working in the shop to the Mills Brothers. I still listen to the Mills Brothers a lot, and the Andrews Sisters, and other similar acts that weren’t related to each other. It’s interesting because Megan’s band Nancy and Beth, she also loves that kind of music, so they do a couple of Mills Brothers songs that I find quite fetching. I also love jazz, specifically John Coltrane and Thelonius Monk—they get a lot of play at the woodshop.

There’s an early hip-hop side to my catalog. The Greatest Hits of Kool and the Gang is one of our favorite records in the shop. It’s very rousing music, so after lunch when we feel like we’re ready for a nap, we put on Kool and the Gang and that gets us bouncing back over to the table saw. Also in that category would be the Gap Band, the Dazz Band, Parliament, Sly and the Family Stone. Old-school funk, I guess. Also the early records of The Meters from New Orleans; their stuff really gets my fanny bumping.

What can you tell me about the new reality competition series that yourself and Amy Poehler have in the works, The Handmade Project? Is Amy experienced in the handmade world?
Well, I’m really excited about the show. It’s a really fun celebration of people who make things with their hands. Those are my favorite kind of people, so to do this show on a big platform like NBC thrills me to death. When I’m touring, I always include as part of my spiel encouraging people to get off their phones and their video games and make things with their hands. It’s a much better way to say “I love you” to your friends and family than showing them your high score on Call of Duty. The show was the idea of Amy and her production company, which means it’s going to be way better than if I was in charge. I’m really excited to see how it turns out, and I’m very grateful that they invited me to be a cheerleader on the show. I love meeting people who are exceptionally talented, and I love the notion that we’re going to encourage a large audience to make things, because that makes us better citizens.

Amy is a self-proclaimed novice when it comes to crafting, but she’s a huge fan. She’s always been surrounded by people making things. So she has said she’s really excited to have this close-up view of the ingenuity of crafting people, and undoubtedly some of it will rub off. I’m sure she’ll be making quilts for everybody by Christmas.

In American Ham, you outlined your “10 Tips for a Prosperous Life.” As this was produced a few years back, have you made any addendums or substitutions since then? What might be 11–15, if you could add those?
The latter is much more likely. A list like that never really shrinks, although there is one I’ll weigh in on. I think it might have been number four, and that was “Eat red meat.” I still very much enjoy red meat, but I’m older now and I’ve come to realize in conversations with my cardiologist that my circulatory system is not that of a fictional comedy character, but in fact exists in the real world. So I might amend number four to “Eat red meat … on occasion.” In this day and age, I could probably tour another show with a second 10 tips that would all just involve good manners, and standing by one’s word. “Don’t grab people in the genitals.” Things that you would think would be obvious, but apparently not everyone knows these points of etiquette. No. 17: Spend a weekend at the White House once in awhile instead of golfing. There’s a great tip for success.

Did you have any additional information you wanted folks in Sacramento to know about your show?
I’m terribly excited; I haven’t played Sacramento before, and looking at the weather patterns and my own improving health situation, the Sacramento show will be the pinnacle of my touring career. So I wouldn’t miss it if I were them.

Cap City Comedy’s Weekend of Unlimited Laughs will run from April 21–23, at venues around town including Punch Line and The Comedy Spot. Offerman’s show will take place at the Memorial Auditorium on April 23, 2017. For tickets and a full lineup of events, go to Capcitycomedyseries.com.

**Editor’s Note: As of Friday, April 21, 2017, we are currently running a TICKET GIVEAWAY on our Facebook and Instagram pages where four lucky Submerge readers will win a pair of tickets to this show! Check out our pages to enter to win (it’s easy, really). Find us @SubmergeMag on both IG and FB!**