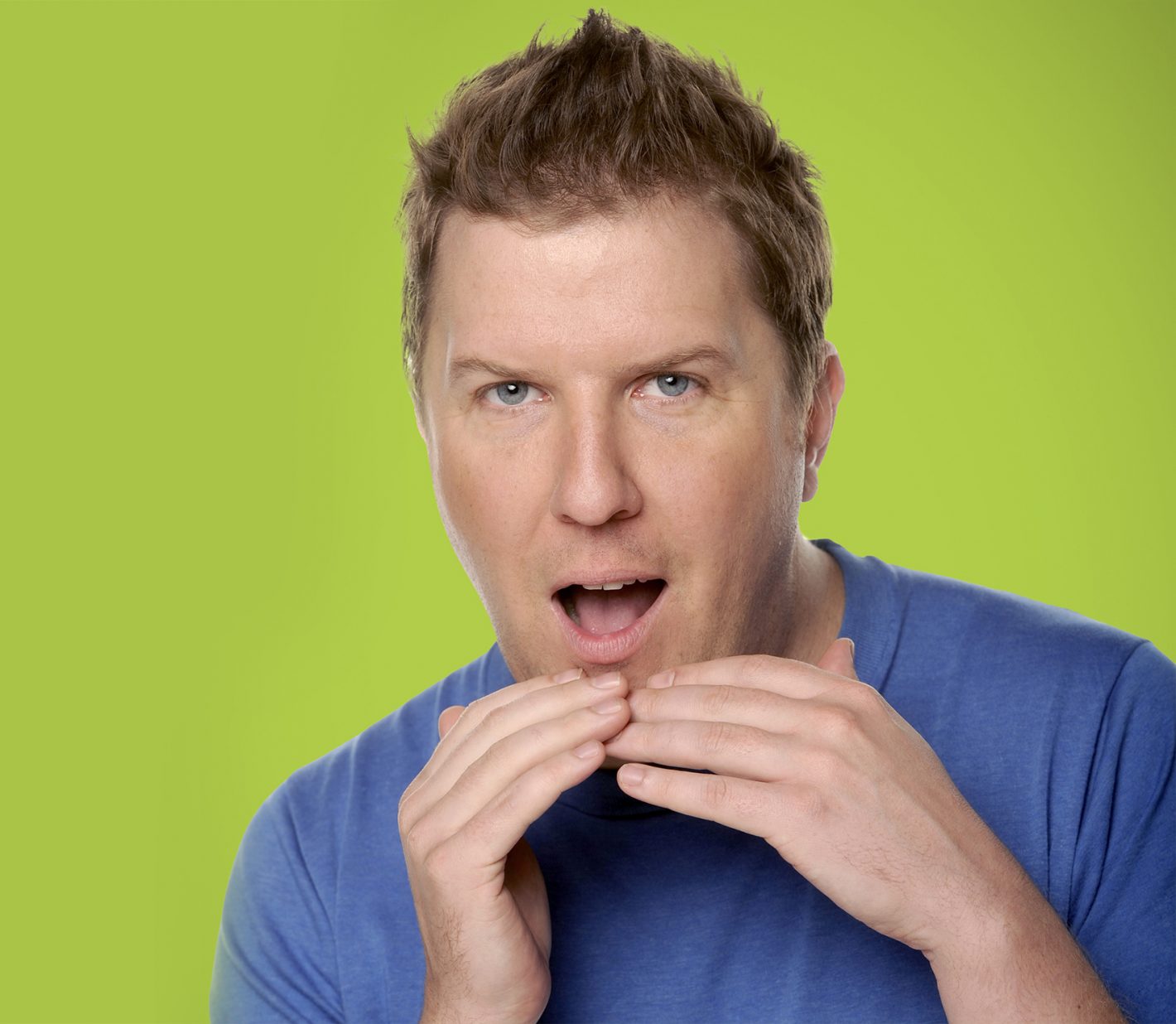 Nick Swardson has spent more than half of his life in Hollywood. He began his comedy career at 18 and was discovered shortly thereafter, thrusting him headlong into a world of scriptwriting, film and TV appearances, and national tours. Watch any of his work, and it’s readily apparent—he’s been that 18-year-old kid from Minnesota the whole time.

When Grandma’s Boy (which Swardson co-wrote and starred in) hit theaters in 2006, I was 18, and the competitive outlets du jour included Halo and Texas Hold’em. Inevitably, whoever won anything in my comedy-loving yet highly derivative group of friends would launch into Swardson’s faux-innocent taunt: “What does high score mean? New high score—is that bad? What does that mean? Did I break it?”

I’d bow low enough to nostalgia to call Grandma’s Boy a cult classic. So when I Googled it for a little catch-up, I was surprised to find that Rotten Tomatoes, which didn’t even exist in 2006, had retroactively rated it a paltry 16 percent. I’m not sure how Grandma’s Boy’s approval rating is less than half that of our current president’s, but I’d guess it has something to do with the fact that no movie critic has ever been a teenager.

While critics bemoaned fart jokes, Swardson countered by naming one of his stand-up specials Seriously, Who Farted?—half-asking and half-saying, “Yeah, it was me.” Swardson brought that same boyish mix of exuberance and mischievousness to all his roles, whether as a fixture in Adam Sandler’s Happy Madison film family, or as Terry, the roller-skating gigolo in Reno 911.

Just past the north side of 40, Swardson finds himself still a fan of his hometown Minnesota sports teams, still starstruck by other celebrities and still ready for the road, though maybe a little more comfortably this time.

We recently interrupted each other’s March Madness enjoyment to catch up on his career.

Me too! I just had to mute Kansas and Clemson when you called.
Yeah, I’m a psychotic sports fan, and my Vikings this year just completely blew my head off.

Oh, well, you might not want to finish this interview, I’m an Eagles fan [the Philadelphia Eagles defeated the Minnesota Vikings in this year’s NFC Championship game].
Oh my God … Well, a lot of my good friends are from Philly so it’s OK.

The Eagles and Vikings both have a pretty tortured history.
Yeah, I mean, I was happy for you guys. You fought through the shit.

I know. And had the Vikings won, we would have 100 percent been rooting for them in the Super Bowl.
That Saints game was insane. Craziest thing I’ve ever seen. I was at my hotel while I was doing shows in Colorado, and that play happened at the end of the game, and I fell to my knees at the hotel bar and started sobbing. Everyone was staring at me, and I was literally just sobbing. They were like “Oh my God, are you OK?” I’m like, “I’m a Vikings fan!” They’re like, “Oh OK, we thought you were having a fucking heart attack.”

So, you’re about to start your “Too Many Smells” tour …
Yeah, and I’ll be doing the Crest Theatre, which I love. I did it on my last tour and had a blast.

Such a great building. When did you first play Sacramento?
The Crest is great, I love Sac. I used to do Punch Line back in the day when I was starting out. I drove from Minnesota when I was 19 and doing stand-up across the country, and I drove straight to the Sacramento Punch Line. I was MCing and they didn’t have money to put me up, so I had to sleep in my car. So I just slept in my car every fucking night.

You could have slept in the mattress store next door.
Yeah, right? I was opening for Kevin James. And it’s weird, it’s kind of come full circle. Now, Kevin’s a close friend and I’ve done a ton of movies with him. Recently I asked him, do you remember when I slept in my car?

That’s become the norm now. Clubs don’t really put up features and MCs at all anymore.
No, not at all. I mean, I bring my whole show, so I bring my opening acts, so, you know, I pay for everything. And I make sure they sleep in their car.

Did you meet Adam Sandler through Kevin James?
No, Sandler saw my special [on Comedy Central Presents] and he wrote my name down and was like, “I like this guy.” And he had this movie Grandma’s Boy, and he brought me in to meet with him and was like, “Will you rewrite this movie? You can write yourself a part. It’s kind of PG right now and we want it to be a hard R.” And I was a writer, so I was like, “Yeah, I’ll do that.” So I rewrote it, and now it’s Grandma’s Boy.

That movie hit me at the perfect time in my life.
I love that movie.

What movies are you working on now?
I just finished The Buddy Games with Josh Duhamel, Dax Shepard and Olivia Munn that’s awaiting a release date. I’m developing another movie with the director of Grandma’s Boy. And a new TV show. But right now I just gotta get through this fucking tour.

When was the last time you were actively doing stand-up?
I did a gnarly tour three years ago for my last special that was called Taste It, it’s on Comedy Central. And I did 55 cities on a bus. And I remember I was super excited because I’d never done a tour bus. So I called my agent and told him, “Keep adding cities. Let’s do this!” And I got on the tour bus with my buddy who was opening for me, and we got a week into the tour. And I was like, “This was a horrible idea.” And we were a week into a three-month tour. I didn’t realize on a tour bus you can’t really sleep because it’s really loud, especially in the back where my bed was. So I’m completely sleep deprived, and I remember I was just terrified that the driver was going to fall asleep and kill everyone. It was just a complete anxiety attack. Me and my buddies got bottles of wine and would just chug wine until we passed out. So I’m not doing a tour bus this time.

Do you feel like you’ll always continue to do stand-up?
I’ll try. I’ve been in Hollywood for 20 years and developed a million TV shows, a million movies, and you always have executives and people telling you what to do, telling you what’s funny. Trying to control the project, giving you notes, making you rewrite stuff. And stand-up’s the only thing that you control. I control that, I control what I say, I control what I do. Nobody can tell me what to do when I go on stage. Nobody can go, “Don’t do that.” I’ll be like, “Fuck you, I can do whatever the fuck I want.” That control factor is just priceless.

You got into stand-up at 18. How soon after that did you know it was what you wanted to do?
I knew right away. The first time I did an open mic I got off stage and was like, “Holy shit.” It’s such a rush. It takes a toll on you, because it’s such a weird thing. It’s not natural for your body to do that. Even at this time, I’ve done it 21 years now, and it’s exhausting. It really takes a lot out of you. All the travel, trying to eat healthy, have energy for the show, dealing with tickets, everyone’s asking you for tickets, dealing with lists, the tour manager. Oh my God.

The physical toll of comedy is something that’s not often talked about.
It’s all eating healthy and getting sleep. People think [because of my character] that I just go out and rage. You have to dial it down when you turn 40.

I saw you tell a drinking story on This Is Not Happening.
I was also shitfaced when I was telling the story.

Do you usually drink before you perform?
Not really, maybe a couple at the most. You have to be a professional. I do remember one time, I was at the Hollywood Improv, and I was just drinking at the bar. I didn’t have a set that night, but I used to drink there all the time. And whoever was running the show came over to me and goes, “Hey, the headliner just canceled. Will you go on?” And I was like, “No, I’m shitfaced.” And they were like, “Well, we really need you to go on.” And I’m like “No, I’m in a blackout.” And he says, “You’d really be doing us a favor.” And I’m like, “Alright, fine.” So I got a napkin, I wrote my jokes down. I go up on stage. The second I got on stage, I realized, I should NOT be on stage. I was REALLY drunk. So I tell the first joke, totally butchered it. Try to tell it again. Butcher it again. And then I just go, “I’m too fucking drunk.” And I dropped the mic and walked off and I got a standing ovation.

Do you have a favorite Sacramento story?
This is one of my favorite moments. We’re on a press tour for the movie Just Go With It. Me, Adam Sandler and Jennifer Aniston. We’re in Dallas. Sandler plays a lot of basketball. So [Dallas Mavericks owner] Mark Cuban goes, “Hey do you wanna play in our practice facility?” Sandler says yeah. So we show up, and Peja Stojakovic, who used to be on the Kings, is one of my favorite players. I loved that Kings team. I loved J-Will [Jason Williams], all those guys. So we’re standing there and Peja is doing shooting practice. So Mark Cuban’s like, “Hey, just wait a minute, Peja’s almost done.” So we’re waiting and then Peja sees us and walks over, and he goes, “Hey, Sandler, I’m a huge fan, pleasure to meet you.” And he turns to me, and he goes “Hey, what’s going on?” And I literally went into a weird brain fart because I was so excited because I fucking love that guy. Sandler goes, “This is my friend.” And I go, “My name’s Peja.” And he goes, “Your name’s Peja too?” And I go, “No. What? No. Sorry. My name’s Nick.”

He was probably so excited to finally meet another Peja.
And I was just starstruck.

Nick Swardson’s stand-up tour, Too Many Smells, will be at the Crest Theatre (1013 K St.) on April 29. You can buy tickets at Crestsacramento.com.