Stand-Up: The Next Generation • Parker Newman and Marcus Peverill Struggle to Make it as 20-Year-Old Comedians in a 21-Plus World 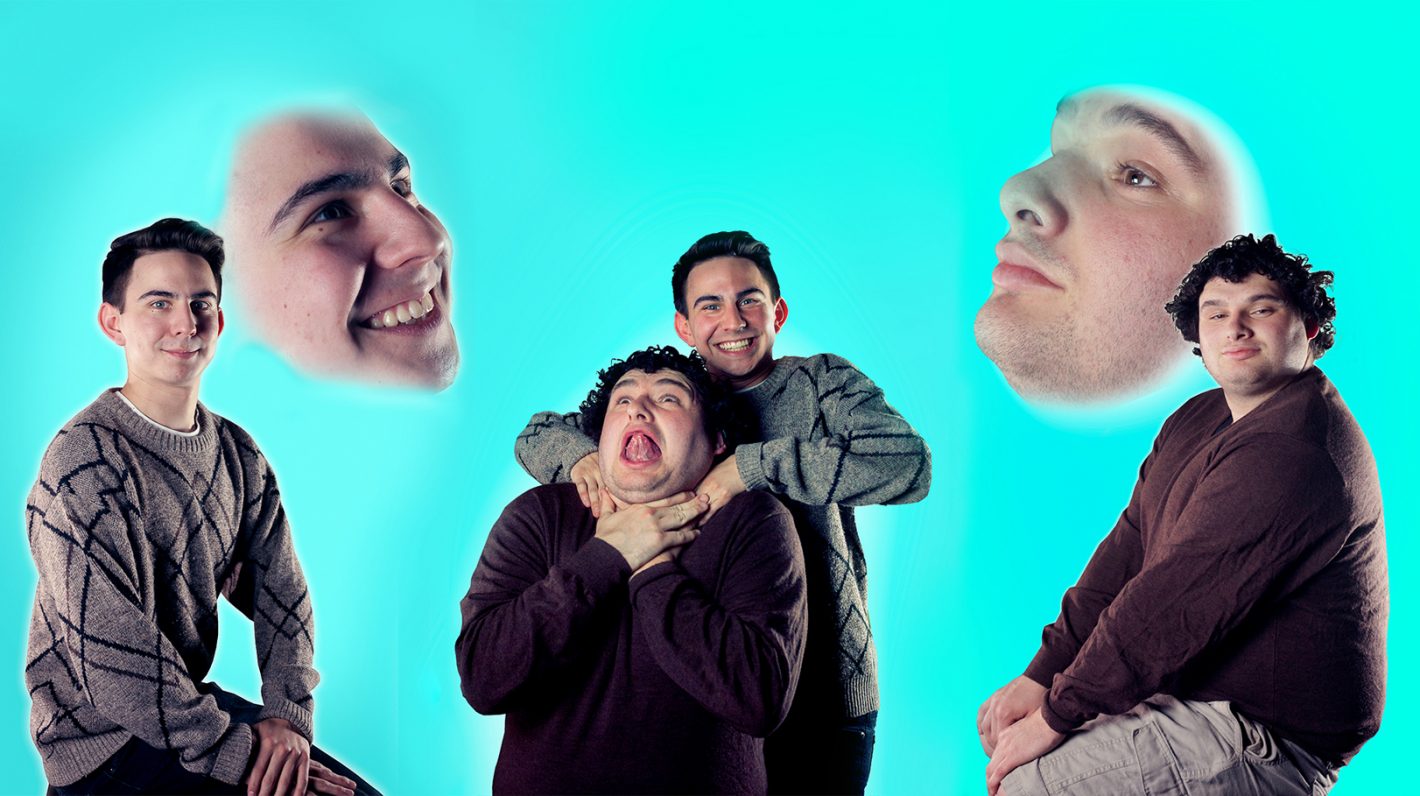 It’s hard enough to be a comedian of any age, but to try to grow and thrive as a minor has additional challenges. You’re still awkward around people, your life experiences may not be as extensive and some venues either won’t let you perform, or make you stand out in the rain until it’s your turn to go up on the microphone. Despite these challenges, Marcus Peverill and Parker Newman are two 20-year-old comics that have less than a year in stand-up comedy but are already getting reputations as fresh, dark and clever personalities. I’ve watched them win over obnoxious out-of-control rooms and bomb horribly in front of them as well.

Marcus Peverill frequently performs in Sacramento but is based out of Modesto. His family recently moved to Virginia, and he stayed behind to keep working on his comedy. He’s 20, but he could easily be mistaken for someone several years younger. Crowds at bar mics often treat him like a kid that snuck in, but once he disarms them with relationship jokes and sarcasm that someone his age shouldn’t have, he quickly gets them on his side.

Parker Newman, also 20 years old, is a Sacramento native and has a style and observational material that is wickedly disturbing and hilarious. Jokes like, “I don’t think it’s such a big deal when someone says, ‘Jesus Loves You.’ He loves everybody. That’s like getting excited about the free square in the middle of a BINGO card,” feature prominently in his wheelhouse. In March, he tweeted “how’s it going dad?” to Artie Lange, which resulted in a chain of responses, retweets and even a phone call with career advice from the comedy vet and actor on HBO’s Crashing.

I spoke with the two of them individually about the challenges and experiences young new comedians face.

What was your first performance on stage like?
Marcus Peverill: I first performed at The Queen Bean Coffee House open mic in Modesto. There were a bunch of comedians who had been doing it longer than me who went up. I kind of just bombed my ass off pretty much.
Parker Newman: I bombed so badly I didn’t come back for a year. It was horrible. I tried to do an act out that I gave up on halfway through. The joke was supposed be that whoever built a time machine would be really mad about something, so in this joke his motivation was that he wanted to order salad instead of soup. In the middle of my joke, I saw the light and thought I had to get off the stage, so I just said, “That’s my comedy” and walked off.

So the joke was just that he wanted salad instead of soup so he built a time machine?
PN: Yeah, I’m not proud of it.

How did you come back after bombing?
PN: I waited a year and went to Luna’s Café, because I didn’t want anyone to recognize me. But I didn’t realize the same comics go to all of the mics. I actually did alright when I came back, but I didn’t want to bomb again, so I stopped going for another year.
MP: I feel like the reason I stuck with it, even though I bombed, was that all of these comedians told me to keep going. I saw them do well and it inspired me that I wanted to be as good as them, or even better. I kept working on it. I’d go every week by myself, and I started hitting mics in other areas.
PN: I got booed and heckled so badly at Vince’s [Ristorante] in West Sac. I couldn’t even respond to the heckles because new ones would come at me before I could even think of a comeback.

What’s it like at Vince’s?
PN: It’s a bar crowd, but it makes that bar in Star Wars look like Chuck E. Cheese. I am very happy for stage time, but people there aren’t drinking to escape, they don’t even want to live. I don’t even think they’re drinking alcohol there. It’s like anti freeze or some shit. They’re just downing Windex.

What’s a funny experience talking to someone after they saw your set?
MP: I have a joke about my girlfriend hanging herself. I had a couple come up concerned that it actually happened to me. It was so ridiculous that they asked me that I just acted upset that they would even question it. It got really uncomfortable after that.
PN: I have an AIDS joke that wasn’t polished at all. A woman told me that AIDS jokes weren’t funny. I just told her I didn’t know how to talk to girls. Then she said that it wasn’t my joke she had a problem with but that Leonardo DiCaprio made an AIDS joke that she didn’t like. I just said, “OK, I’ll keep that in mind.” I had no idea what she was even talking about.

Parker, you got a lot of attention and encouragement through Twitter from Artie Lange. How did that all happen?
PN: People said that I looked like him so I tweeted, “Hey, Dad, How is it going?” and he saw another tweet of mine that he thought was funny, and we started shooting the shit back and forth. It was awesome to hear from him. It makes me sound like a dick that I’m bragging.

No. You threw a comment that probably should have got ignored, but he responded and dug your stuff. You actually talked to him on the phone for a while?
PN: Yeah, he said he’d like me to open for him. He gave me some pretty good advice. He told me to keep wearing my cargo shorts on stage. “A lot of people will give you shit for cargo shorts, but keep them, and be yourself.” Some people get very anal about how you dress on stage. I get where they’re coming from, but I think it doesn’t matter if you’re not being yourself. You have to be comfortable.

What’s it like performing in a bar compared to a comedy club?
PN: You learn a lot more outside of clubs. I can’t stand telling the same jokes, so I like places like that. But if doing open mics kill your self esteem too much then you can go to The Punch Line or Comedy Spot.
MP: It’s definitely harder [in a bar], but those are the kind of rooms you need to do well in to murder in a club. It advances your crowd work skills. It’s so much more about the material than your stage presence. What sucks is just looking so young.

Do you think your youthful appearances set an expectation with the audience that helps you?
MP: It’s fun because I can talk about things I’ve been through, and they think there’s no way I could have gone through that.

Have you faced obstacles performing at 20 years old? Most of the bars will let you come in to perform, but you have to wait outside, then immediately leave when you’re done.
PN: I’m happy waiting outside anyway, so I can prepare my jokes and hang out with people. There’s a few places that flat out won’t let you in.

How would you describe your comedy?
MP: Darker material and stuff people are uncomfortable talking about. I talk about anxiety and insecurities. My favorite comedians are Rory Scovel and Bo Burnham who have material like that.
PN: Not good yet [laughs]. I’m still working on it, to be honest. People see me as a darker comic but I’m not trying to be offensive. I’m just experimenting with a lot of stuff. I’m still finding my voice and being myself.

You’re getting a lot of praise from veteran comics. Is it hard to get that when you’re so new?
PN: It’s great and I’m honored, but at the same time, I try not to let it get to my head. When I first started getting laughs from veteran comics, and I thought, “OK, cool, I don’t have to work anymore!” But I realize that I’m not shit yet, and I need to keep my ego in check.

What comedians inspired you to start comedy?
MP: The first time I realized I liked it was watching Bo Burnham’s Words Words Words special. I had seen other stand-ups, but I really didn’t think they were that funny.
PN: Bad ones [laughs]. I remember watching people on Comedy Central and thinking I could do better than that. I was wrong. But I love Chris Rock, Kyle Kinane (and a bunch more).

What are goals on your comedy bucket list?
MP: By next year, I’d like to travel. My parents live in Virginia, so I’m maybe going to get a couple of comics to come with me from California to there and find some places on the road to perform at along the way. JR De Guzman said he’d put in a good word for me. Just to see what it’d be like to be a road comic.
PN: I’m just trying to build up my time. I’d love to be able to write as much as I can. I heard getting 30 good minutes is good for going on the road.

In addition to being regulars at many of the open mics in the area, you can catch both Parker Newman and Marcus Peverill together along with headliner Sean Peabody on the Smile Out Loud show at Laughs Unlimited on June 29, 2017. Newman also runs an all-ages open mic comedy show at Café Colonial every third Wednesday of the month.