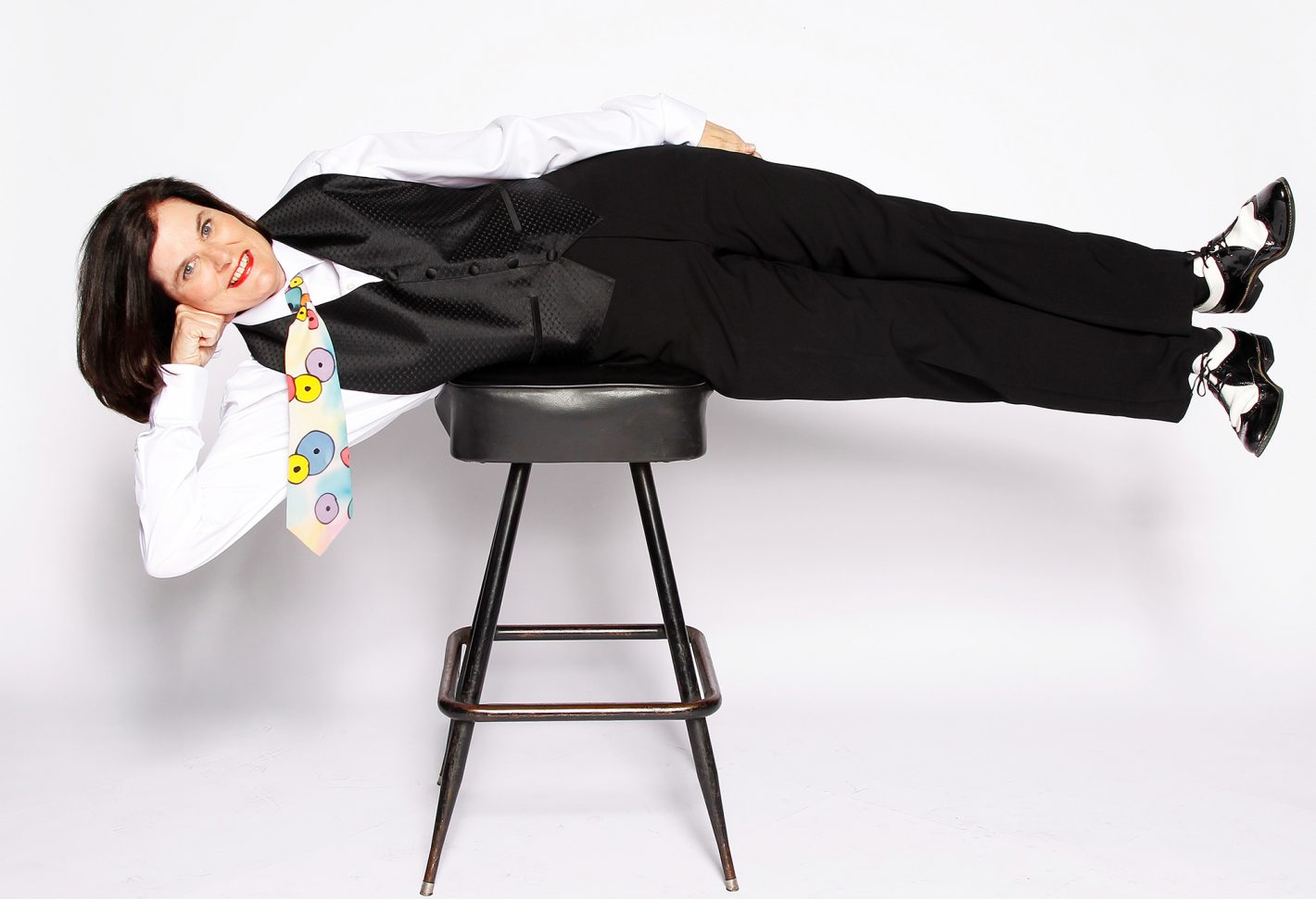 Paula Poundstone is a comedy oddball who has used her quirky charm, Dick Tracy-villain fashion sense and relatable humor that can be completely different from one stand-up show to the next, to ride a successful career that spans more than 40 years and counting. Cutting her teeth at open mics at age 19, Poundstone ended up in San Francisco at a time when some of the biggest names in comedy were blowing up. A tip from Robin Williams to go to Los Angeles further increased her profile and she’s been making folks laugh ever since.

Her books, specials and stand-up performances have won acclaim, but millions more folks have enjoyed her each week for the last 18 years on the hit NPR radio quiz show Wait Wait … Don’t Tell Me. I first heard Poundstone in the 1980s as a listener of The Alex Bennett Show on San Francisco Bay Area radio, where Bennett would host local comedians, in front of a live studio audience, on a program that became the prototype for every podcast that exists now. It’s fitting that Poundstone is now doing her own podcast, Nobody Listens to Paula Poundstone, which has brought her new fans that include 10-year-old kids who aren’t even aware of her stand-up career. I spoke with the comedy legend to talk about her career, podcast, her upcoming show in Nevada City on Feb. 15 and cats. Not the movie, but her giant brood of live cats.

How many cats do you have now?
You know, the field is winnowing. I have 12 cats. I had 16 at my peak. They don’t like to live forever. Twelve is still enough to be a normal, full-time job. I always tell people I’m like a very unprofitable farmer. Fortunately, there’s no payload on cats. And I have two big dogs.

Do they all get along pretty well? Is there like one or two that are trouble?
I’m not sure that my cats have established who the pride leader is. At night I can hear them. I don’t let the cats sleep with me anymore. I used to sleep on the living room floor because I like to be among them, but we have a rash of territorial peeing here and they’ll pee right on my head. So I had to give that up. I can hear them on the other side of my bedroom door fighting sometimes. They haven’t established the proper order. It’s like a primary [election] but with more dignity.

Do you ever just sit and look back at the content you’ve created through the years—the albums, the specials, the books, columns, live shows, radio shows and podcasts? You’ve got to have thousands of hours of content that you’re a part of.
I don’t remember a lot of stuff, unfortunately. I think I had a dream one night where I had stumbled on some old material. My act is largely autobiographical. I spent a year or so making jokes about parenting little kids. But as they are young adults, I feel that it’s not germane any longer. Every now and then I’ll be on stage and tell an old story, but for the most part, I don’t remember anymore. I tend to talk more about stuff that I’m doing now. When I first started being a stand-up comic, I talked about bussing tables, because that’s what I did for a living, and taking public transportation. I don’t remember much of those jokes anymore either.

I have one piece of material about when I worked at the IHOP when I was 18 in Orlando, Florida. I started as a comic when I was 19. I still do that piece, but I don’t remember anymore. But I like the joy of trying to think of stuff.

You’re known for having a different show every time you go on. Do you have much of a plan when you hit the stage?
Not much of a plan. I might be better if I did. I think the inside of my head looks like that amusement park game where you step inside a glass booth and they blow paper money around you. I think I’m in my 41st or 42nd year, I’m not even sure, and somewhere in my head is 41 or 42 years of material rolling around. If I’m on stage and remember it, I can have that.

I always tell people my show is a bit like a cocktail party. You come in and talk about how hard it was to find a place to park, and somebody says tell that old story you told before … Then you talk about current events and somebody on the other side of the room spills a drink and you mock them.

That probably keeps things exciting for you to keep performing, as well.
It does. I know guys that have done the exact same act for a hundred years, and by the way, they are very successful, and people really love it. I’m not saying that one works better than the other. There are a few reasons that I work the way that I do. One is that I just plain have a pitiful memory. But I was first starting out as an open micer …

In Boston?
I started in Boston. Then I took a Greyhound across the country to see what it was like performing in different cities. I ended up landing in San Francisco. I fell in love with one particular club there. The second night I was in town I went to a place called The Other Cafe. It was just great. It was only alive and kicking for six years, but it was six glorious years. They were really fun nights there.

Me and the other open micers would run like a pack of wild dogs from one club to the other. I also worked behind the counter at The Other Cafe during the day. I would hear the waitress complaining about the comics. What they were complaining about was that they were bored with the material because they were hearing it over and over again. So I aimed to create a waitress-pleasing act. I figured if you could appeal to these waitresses that heard this stuff over and over again, then you had to be pretty good. That became the influence as to how I work. Forty-some-odd years later, for the most part there are no more waitresses. I work mostly theaters. I don’t have them as my judge and jury anymore, but I just developed working that way.

The radio stuff you’ve done, even going back to Alex Bennet’s show in the ‘80s with comedians talking is pretty much the format of every podcast now. How did you start doing A Prairie Home Companion and Wait Wait … Don’t Tell Me?
I can’t remember when I started PHC, but Wait Wait … I started 18 years ago. They had been on already for about three years. One of the guys, who’s now the executive producer Mike Danforth, had used to work for A Prairie Home Companion. Garrison [Keillor] has gotten me to do A Prairie Home Companion and I had never even heard of Wait Wait … Don’t Tell Me when they called me. I know they probably don’t like it when I say that, but it’s true. I had a cassette tape which they had sent me, which tells you how long ago this was, so I could know what the show was. I had just put the cassette tape on the island in my kitchen, that annoying place where the jokes pile up. I was standing in the kitchen one day with a nanny and he said, “What’s this?” I told him it was some radio show they wanted me to do, and he said, “Oh, I love that show! You’ve got to do that!”

It’s still fun, and I’m well aware that I’m incredibly lucky to do that show. They give me just enough rope, and not just me, I shouldn’t say it that way. They are great with the panelists and let us jump in and say whatever we want. That’s very rare in this business. I think part of why podcasting is so much fun is that there are no suits. As a podcaster, you get to do whatever the hell you want. Sometimes that leads to a great product, and sometimes it doesn’t, but it’s fun to be unbridled.

What makes a great podcast?
I don’t know. If I knew I’d be far too rich and famous to have this conversation. For me, and I think in everything I do, whether it’s writing a letter, or a postcard (which I still do a lot) or performing on stage, or writing a book, one of the things I’ve aimed for over the years is to be more and more myself. Sometimes when people receive a letter from me they say they can hear my voice. Or when they responded positively to my book they said they could hear me saying it. To me, that’s very flattering. You know, as a writer, making something come off with personality and a point of view is not as easy of a trick as you might think. I think in terms of podcasting, and I don’t usually listen to them because I don’t like to hear my own voice, but I was listening to an old episode trying to get some information about bears.

We’re talking about Nobody Listens to Paula Poundstone?
Yes, it was the legendary Thomas Coyne episode where the survivalist doesn’t show up, from which came a very long-running joke on our show where our audience members are helping to find Thomas Coyne by posting on our Facebook page where he isn’t. We’ve changed the format of our podcast over time, but one of the things I noticed about our earlier episodes is that I’m trying to find that sweet spot. On television or radio, we would have been canceled. It’s cooking spaghetti so we can just throw it on the wall and see if it sticks. That’s the fun part.

Paula Poundstone will be performing at the Don Baggett Theater at Nevada Union High School in Nevada City (11761 Ridge Road) on Saturday, Feb. 15 at 8 p.m. Tickets can be purchased online through Thecenterforthearts.org. Information about subscribing to her podcast, Nobody Listens to Paula Poundstone, can be found at Paulapoundstone.com. EDITOR’S NOTE: THIS SHOW IS NOW SOLD OUT!