Pauly Shore and The Phenomenon of Nostalgia 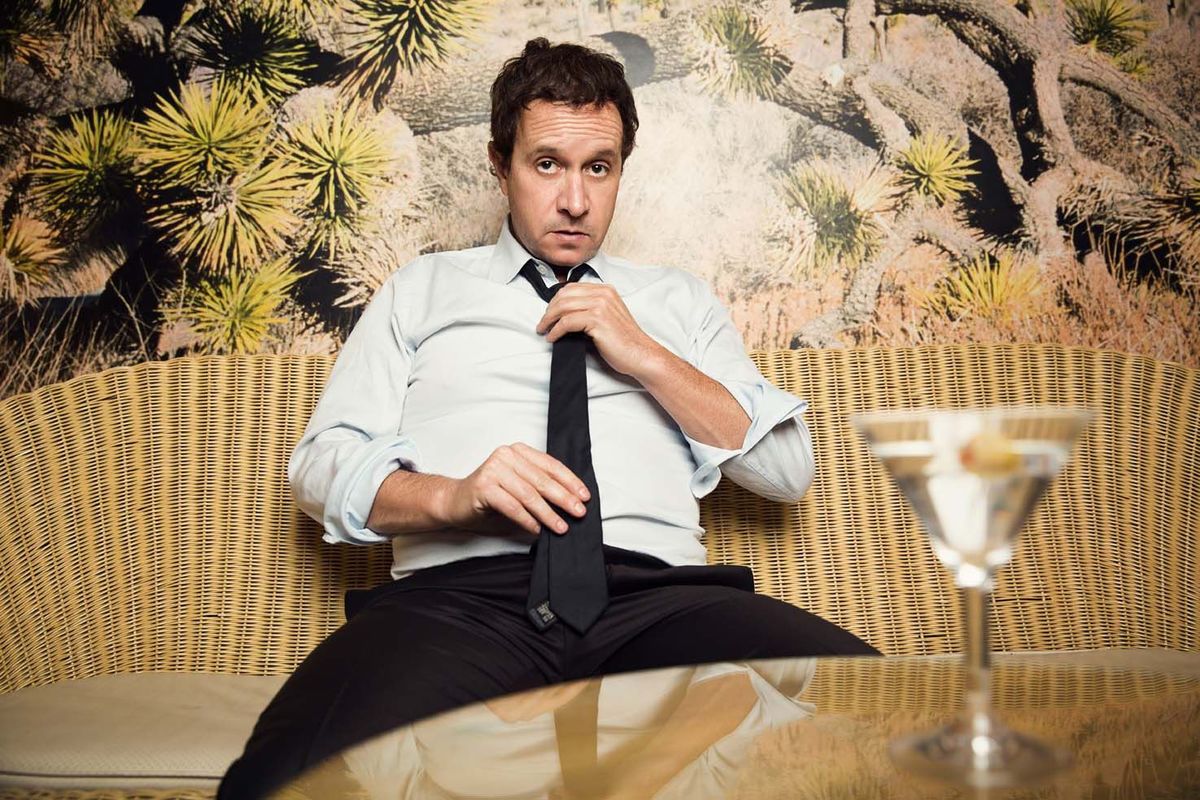 Scene: It’s 1990 or 1991. You are a pop-culture sponge, spending long hours in front of the television set, beginning to notice the opposite sex, starting to cultivate your own sense of individuality. You are listening to bitchin’ music. You are amazed and annoyed, elated and embarrassed by everything you see, hear, smell, touch or taste. Then you see him—some curly-haired punk-Steven Tyler making strange carnal noises with his mouth, calling you “Buuu … ddy” and calling himself a weasel, courting throngs of tanned-skinned revelers for MTV’s Spring Break. A year later he stars in a film about guiding a thawed-out caveman through the Encino school system with a guy who later grows up to play Samwise Gamgee.

You have found your ultimate god-figure, and you’re not even a teenager yet. AND SCENE.

Pardon the indulgence of regurgitating what is mainly my personal experience with relation to the now-legendary comedian Pauly Shore. That my introduction to Shore was hardly unique, in a relative sense, is important when thinking about who Shore is now, who you are now, who Shore thinks he is now and how most people feel about him now. This is an exercise in the metaphysical world of Pauly Shore and Those He Has Influenced, and there are not nearly enough words assigned to tackle the whole boiling mass.

As unfortunate as it is, the ebb and flow of show business can be unforgiving to some people, and there are two camps you’ll find with regard to the phenomenon of Pauly Shore: those who aren’t assholes and appreciate entertainers in all their shapes and seasons, stars burning brightly or dully; and who that aren’t assholes, but just think Shore was never very funny to begin with.

There are probably other camps, too. Most notably those for whom the ephemera of Shore’s salad days ought to have just been bottled up in a time capsule and appreciated for what they were: the product of a comedian raised by comedians who was destined to be something big, no matter what it was.

This is all to comment on the fact that Pauly Shore is coming to town to do stand-up. Lots of nostalgia acts—regardless of the stigma such a tag may connote—have to deal with questions like Shore doubtlessly does all the time. They’re tough questions to ask. Remember when you did Son-In-Law? Remember when you did In the Army Now? Hey, by the way, working on anything new?

Luckily Shore is a bit of a workaholic, and has enjoyed much more exposure in recent years thanks to the explosion of comedy podcasts who line up to have him as a guest. After all, Shore’s mother owned and operated Los Angeles’ famous Comedy Store for decades, including during stand-up comedy’s heyday in the early to mid-‘80s. Shore’s father used to open up for Elvis Presley. Pauly himself was mentored by the late, great Sam Kinison. There’s a rich history here that is widely known and is great foddler for audio trips down memory lane.

In 2005, Shore produced and starred in the mockumentary Pauly Shore Is Dead, riffing on the idea of what mainstream America must have surely thought was the case stemming from Shore’s absence from the spotlight in the new millennium. An entirely more riveting, non-mocking documentary emerged in 2014 titled Pauly Shore Stands Alone followed Shore on a Midwest tour of comedy clubs. This acclaimed doc vacillated between Shore’s raucous stage shows, run-ins with Weasel worshippers and Shore struggling with the long-distance care of his ailing mother (Mitzi Shore has suffered from Parkinson’s for years) while her longtime home was being sold.

Most recently, Shore started a podcast, and has an impressive list of guests for shows available via his website.

“When you interview people, it’s never about you and that’s kind of what I like,” explains Shore by phone from L.A. “My whole career it’s always been about me. It’s nice to take it off of me and put it on someone else. For me, challenging that muscle in my brain to stop talking about myself … I like that. It was something different.”

It’s an iffy kind of conversation Shore and I have, hence all the windbaggery above. There are talks of new projects in the works, but they are stunted.

“I don’t wanna tell you what projects I’m working on because I don’t like to talk about them until they’re finished and coming out, ya know?” explains Shore straight away.

When pressed, Shore opens up about his love for comedy, its place in his life and the reason he doesn’t have kids.

“My first love is my comedy and my work. That’s where my heart is and that’s probably the reason I don’t have a family,” says Shore. “I’m super selfish and super into my thing. You only have so much time in the day to create projects and to do stuff. So that’s where my heart is, but of course, I lose out on a lot of love, and children and all that stuff. But I have other things I get to do. I just don’t know if that’s ever in the cards for me. It’s never too late, obviously, to have a family. But my family is my stuff.”

Of that “stuff” currently in the works is the editing of the videos that Shore shot in conjunction with the podcasts he recorded featuring guests like Garry Shandling, Nick Kroll, Gallagher, Chris Kattan and many more.

“A lot of the people I interview, I’m really interested in them, and I think it comes across that way,” explains Shore. “I’d have to say the videos will be kind of groundbreaking. No one has ever done them like this before. I spent a lot of time and money on making them look good to tell the stories of these different people. I’m pretty stoked about that.”

On the stand-up side of things, Shore keeps within tight orbit of the smaller market cities and venues, of the suburbanites who may be more forgiving of his relatively limited range for joke-telling. Which is not to say that Shore is unfunny, or that his ability to entertain people has somehow faded away; in fact, his stand-up tours regularly sell out in smaller venues.

Still, you’d be hard-pressed to find any of Shore’s jokes to be all that funny. Sure, they’re abrasive, or offensive, or perhaps provocative enough to elicit nervous laughter from the sober and riotous I’ll-laugh-at-anything snorts from the four-drink minimum set. The truth is that Shore’s shows mainly consist of exhuming his ’90s shtick, while throwing in hackneyed bits that don’t go a long way to convince detractors that Shore’s strengths are in telling actual jokes.

Or maybe the joke’s on us. Maybe we’re the assholes.

“I love self-deprecating humor, I love playing the victim,” explains Shore. “I wouldn’t say that’s my whole act. I’d have to say [my early success] is the elephant that’s in the room that I address and then I move on from it.

“Comedy is one of those things that you don’t choose it; it chooses you. So I grew up around it, but it’s in my system, ya know? So coming to Sacramento, it’s not like I’m so excited to hop on a plane and do all that stuff, but I know at the end of the line there’s an audience there. I’m able to feel that love and give back.”

Shore explains that it’s the positive energy he gets from people in public every day, in the audience at his shows, or anywhere he goes that he counts as the most rewarding aspects of his career to now. After all, he is Stoney Brown. He is Crawl. He is Totally Pauly. He is the Wea … sel. And to Shore, myself, and a huge cult fan base, that’s just fine.

“You can’t bite the hand that feeds you,” admits Shore. “All of that stuff is kind of what made me. It was so big and it was so massive that you can’t get away from it. There’s no getting away from it; it’s just there and you just kind of deal with it and flow with it. I’d rather be known than unknown. There are a lot of people who work really hard to come up with something and they never do and they go away. I was able to, at the time in my 20s, make a mark for better or for worse. It was what it was. The timing hit with MTV and all the films and it had a really good run. To this day, 20 years later, I still have that same audience that has grown with me. I’m pretty lucky, I’d have to say.”

Catch Pauly Shore’s stand-up comedy show Dec. 11, 2015, at The Boardwalk in Orangevale with special guests Billy Galloway, Danny Luna and Stephen Tierney. The show starts at 8 p.m and tickets are $20 in advance ($25 the day of the show). Buy tickets and find more info at Theboardwalkpresents.com.