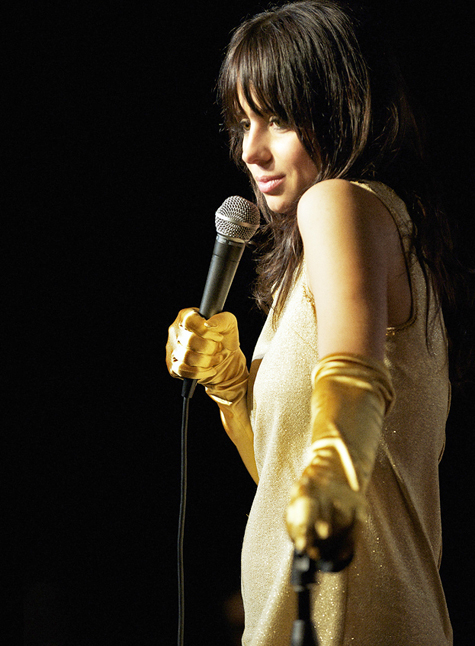 Although convincing in her roles portraying strippers, sozzled skanks and “housewives” on It’s Always Sunny in Philadelphia and Reno 911, Natasha Leggero is no high-class hooker. She is a comedian.

A standup comedian who also does comic acting, Leggero is the voice of Callie Maggotbone on Comedy Central’s Ugly Americans, has been on the Tonight Show twice, as well as the Late Show, Samantha Who and The Sarah Silverman Program, was a judge on the last season of NBC’s Last Comic Standing and gets down digitally with a weekly podcast and a steady stream of pop culture jokes on Twitter.

She’s honed her flailing-arm, bourgeois physical comedic persona while smoothly imparting socially undertoned and well-timed jokes. Such humor and general likeability matched with comedic respect is unexpectedly bold and witty for someone so petite and pretty.

Certainly recognizable from her function as a social humorist, Leggero has been a consistent roundtable guest on E!’s Chelsea Lately since 2007. She’s that unarguably hot little lady with the big sparkly eyes, glossy long dark hair and the kind of jokes that don’t cut, but smack you upside the head with a thud.

Especially feeding on the hilarity of our current social climate, Leggero likes to dress in a glamorously classy fashion (read: wearing pearls while sipping a Manhattan at 11:30 a.m.) and question reality TV, hip-hop songs and “toilet babies” (babies delivered in toilets by women who didn’t know they were pregnant).

Born in Illinois and having attended performing arts school in New York, Leggero moved to Los Angeles to begin her comedy career, working to lose her “flat-A” accent along the way. A fond memory of transitioning from a Midwesterner was being in a place where “people know what sparkling water is,” she shared.

Leggero spoke with Submerge about doing standup, Snooki and why it’s so natural for her to act obliterated.

How long have you been doing standup?
Nine years.

Do you remember the particular club or city where you started your standup career?
I was in Los Angeles at the Comedy Store in the Belly Room, which is a room that was actually designed in the ‘70s for women comedians, and it’s just a great, easy room for comedy. It’s a great place to start out. I think they call it the Belly Room because it’s kind of like a womb. There are no distractions. It’s this small, dark room with low ceilings and no bar in the back. It’s a really kind room for comedy.

No big mistakes that first time?
I’m still trying to get a set as good as the first time I was onstage. It was a great set, and then I was so shocked that everyone was laughing. Yeah, it was just this amazing experience. The laughter just felt like waves coming over me. But now that I think about that story, I remember someone had given me a Xanax, and I had had some wine, so it might have been the drugs doing that.

You’ve portrayed quite a few characters. Which is your favorite character that you’ve acted out at this point?
Anything I do with the people from Reno 911 is my favorite, because they’re all just such amazing improvisers that somehow they make you funnier by just being so generous and funny themselves. They really know how to set you up for the jokes.

I worked with Tom Lennon and Ben Garant from Reno 911. I did Reno four times and I did their movie. I just did a pilot for them for NBC, which didn’t get picked up. Now we’re doing one for FX, which is a white trash, futuristic version of Reno 911; it’s set in space. It’s called Alabama, and I’m going to be playing a sex robot. I’m a sex robot in the future, who’s on the spaceship and everybody is tired of fucking.

So you become a defunct sex robot.
Exactly. I think at one point they order me a new vagina. But it’s all improv.

You’re pretty obviously obliterated in that role on Reno 911. Was it very difficult to act very trashed?
It was sort of an impediment when I was in acting school. We’d be doing Chekov and they’d say, “Stop moving around so much, you seem like you’re drunk.”

And it’s just a physicality that I just naturally do, that, um, seems like I’m drunk. Especially when I’m onstage. I’ve always liked to fall. I always have been good at it. I would always pretend to fall for my friends. I mastered that art of pratfalls, and I’d always have comedy bruises all over myself. It’s something I always knew how to do and it goes well with being wasted.

You are a consistent guest on Chelsea Lately. How many times have you been on that show?
I think I lost count at 70… Last time I did it, Snooki was there, whom you may know from her work on the Jersey Shore. I had my dog with me, who’s a little Chihuahua, and we were backstage. I have a little “service dog” vest for it so I can take it into restaurants, and Snooki was like, “Can I see yoor dwaag?” So I said sure and showed her my dog. She was like, “Why ya got this vest?” I was like, “I have epilepsy,” as a joke, and she said, “What’s epilepsy?” I thought that was pretty phenomenal that word has escaped her, her whole life.

What are your thoughts on reality TV?
I just don’t understand why we’re calling them “stars” when it’s the first thing they’ve ever done… In general it’s pretty silly, but it’s definitely there for us to make fun of, I feel like. It’s a good time to be a comedian.

You joke about not wanting kids, but there’s a picture of you and a baby on your Twitter page.
I can’t believe my friend let me breastfeed her baby! Actually, she let me put a pacifier in the baby’s mouth, and then I pressed it up against my boob. So, that’s not my child. I should re-do that picture with my dog.

When doing jokes about hip-hop songs, you actually sing, and your voice sounds really good. Do you have any plans on adding “singer” to your entertainment resume?
I would love to sing more. My voice is not that trained. I definitely think I could do a lounge act.

If you did put out an album, what kind of music do you think you would do?
I would probably lay on a piano and belt out some old standards. Or maybe write some new standards about toilet babies.

Do you have any favorite type of audience?
I like people who are a little savvier, hip, stylish. They get where I’m going with everything. They are not afraid to laugh at things that can be slightly mean.

Have you had any run-ins of the obsessed fan sort?
This one guy brought a picture of me on Chelsea… and he took the screen shot right when I was in the middle of crossing my legs and you could see the smallest bit of my underwear and he wanted me to sign it.

What did you say to him?
I said, “That’s disgusting,” and then I signed it.