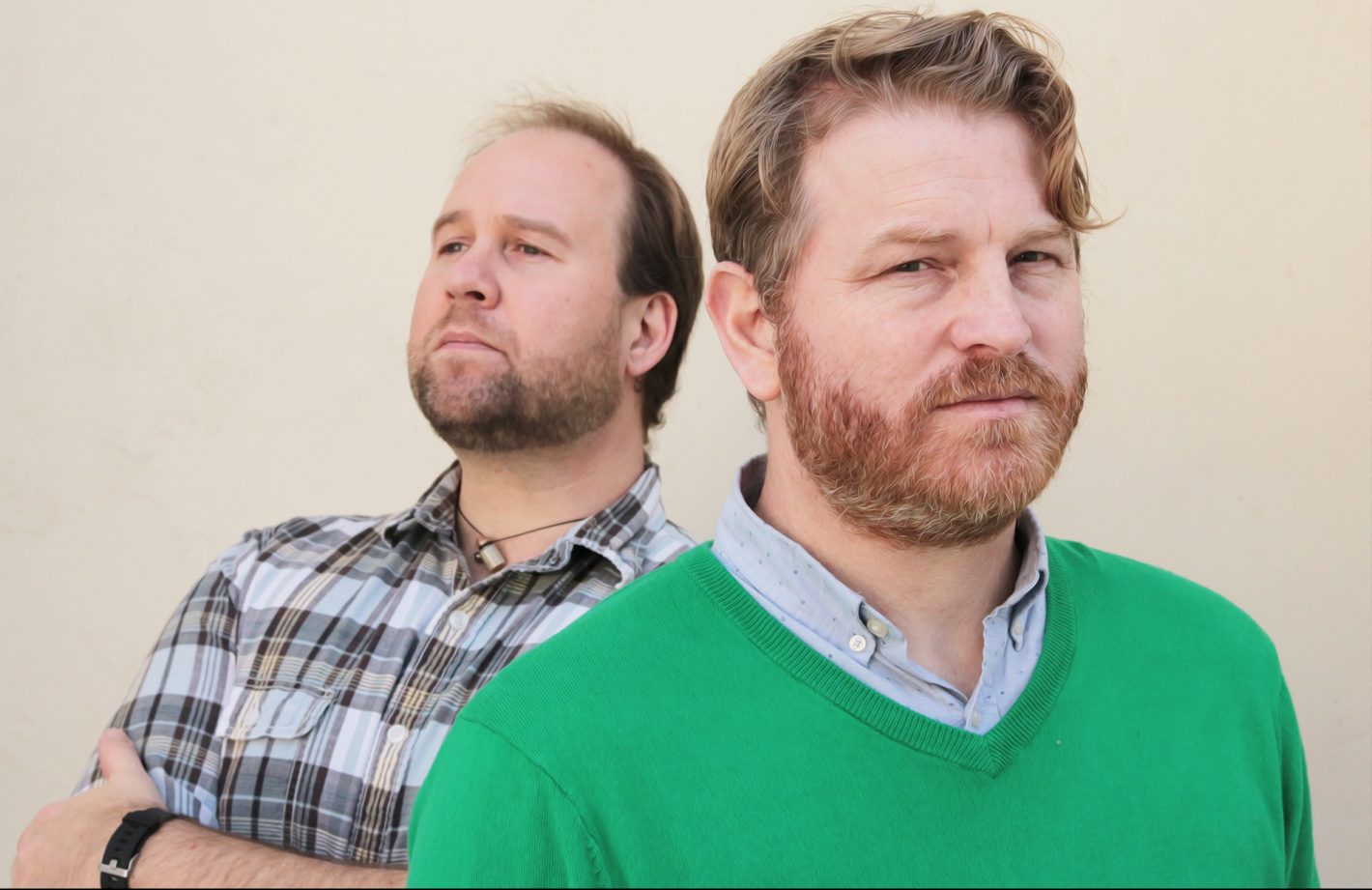 As he continues with verses that are equally horrifying and hilarious, the crowd at Art Luna’s historical venue known for poetry of a slightly less revolting caliber can barely control their laughter as the poem becomes too graphic to reproduce here.

Sacramento stand-up comedy veteran John Ross and The Comedy Spot’s improv and sketch writer/performing ace Jesse Jones have created a show that has spawned some of the most mind-numbingly brilliant, disturbing and side-splitting performances you’ll ever see. This Feb. 21 at their longtime home at Luna’s Cafe, Stab! will be celebrating its fifth anniversary show. I’ve been a fan since the first show in 2013 and in the interest of transparency, I’ve appeared as a panelist three times since then. Also in the interest of transparency, I must tell you that I’m fascinated by things I can see through.

The show features a panel of three comedians who were given prompts to write about in advance. Jones is the resident “House Panelist” on every show while Ross is the host. Taking turns, the panelists are asked to read work as bizarre as “Google Searches of a Drunk Santa,” a commercial for the tourism board of “Socialjusticeopia” or synopsis of a film titled “Blessed Be the Barnyard.” Every show features different topics and panelists, and more often than not is a brilliant showcase of weird and hilarious work. And with two episodes scheduled with each performance, the crowd gets to enjoy a wide variety of laughs for their comedy dollar.

Ross hosts with a deadpan style while managing an array of sound effects, including angry panther growls, while Jones brings an above-and-beyond writing talent to each show that clearly raises the bar for the visiting panelists. I interviewed the two in my backyard on a fine Sunday morning to talk about their unusual and hilarious show.

I asked Jesse and John what their most favorite piece that was ever on the show, and they both agreed it was the synopsis of a fictitious Mexican film, “El Diablo Tiene Un Palo Polla” (“The Devil Has a Dick Stick”). I found the notorious routine at the end of Episode 76 of their podcast, and agree it is a true work of art. Jesse Jones reads the story in a thick accent, “Manuel liked to cause trouble, pushing over carts of beans and making faces at all of the goats in the village.” He goes on to incite more mayhem including hitting a woman’s bosom with an ear of corn, picking fights with chickens, and “telling lies to the barn.” Disgusted by his tomfoolery, The Devil himself appears. Manuel calls him a big red onion and is horrified to learn his punishment for his misdeeds is having his fingers turned into “flaccid penises.” 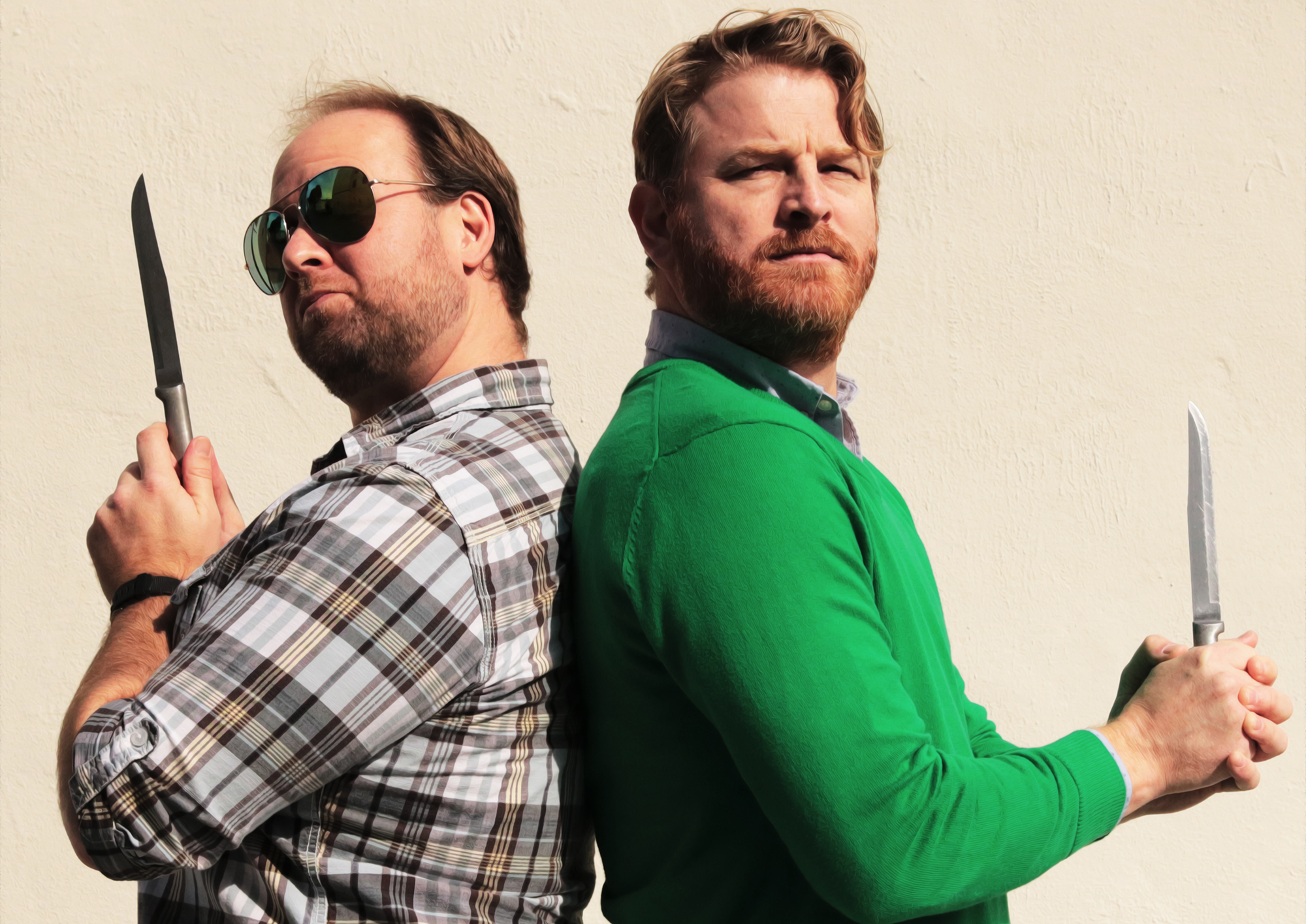 Tell me about the origin of Stab!. Did you found it together?
Jesse Jones: It came at a time that we desperately needed to fill hours at The Sacramento Comedy Spot’s 48 hour Comedy Marathon. I ended up producing 14 hours of material. We had time to fill and John had an idea.
John Ross: I think Jesse and I were loosely tasked to come up with stuff to fill the time slots. I had been doing a show called Comedy from the Couch for a few years at the old Comedy Spot on Broadway and at Chico, and I told Jesse, “Hey, I got this idea!” I wanted to call it The Knee-Jerk Comedy Hour, where it’d be like a variety show with random short bits. It’s hard to say who founded it.
JJ: We used to have six to eight segments on the show.

I think I saw the very first one you did, actually, like “Extreme Guess Who” with wrestlers playing.
JR: You were the referee for it.

Oh yeah …
JJ: Corky Daniels, Jaime Fernandez and Nick Aragon were our first panelists.
JR: That was the earliest version of the show. It consisted of me telling the folks, “Hey, write this shit for me!” And everyone did.
JJ: The current 118-episode run started about a year and a half later at Luna’s Cafe.

Because it was originally not an episodic show, right? It wasn’t meant to be a podcast.
JJ: Well we did record those early shows.
JR: They were on Podbean, then it went away-ish. There was a lot of stop and start. We were like, “What do we want to do with this thing?”
JJ: Probably in July 2014 is when the current run started.

For someone who doesn’t know anything about Stab!, how would you explain it?
JR: It’s really just a comedy panel show that we happen to podcast. It’s writing-based. Recently on Facebook I realized we’d been branding the show incorrectly for the last five years. For me, when I hear another comedian has a podcast, I’m like, “I’ll never fucking listen to that” unless I’m really into what they’re saying, or their idea or premise.

Everyone’s got one.
JJ: It’s a comedy writing panel show.
JR: I’m not sure even that says what it is.

It reminds me of like if Whose Line Is It Anyway? was geared toward writers who had preparation. It definitely rewards comedy writing. The performances obviously add a lot to it, as well. I know people who have been on the show really know that it’s a challenge. Stand-up comedians are used to just showing up and giving you their best stuff, but you gotta bring completely new stuff here.
JJ: The reason that I was and am still interested in doing the show is because I’ve wanted to do the stand-up stuff in the past, but the main thing that has kept me from doing that is the idea of doing the same material over and over again for years on end. And this is exactly what I want to do: write things quickly and under a deadline.
JR: Stab! mixes the best elements of sketch writing and comedic banter. But it’s not a sketch show.
JJ: It’s the best combination of sketch, stand-up and a little bit of improv. It ropes everything together, which is why sketch writers and improvisers have done just as well if not better than stand-ups.

What are some of the prompts that are used?
JR: Well, we have “Reorganization” which we take an existing acronym and reimagine it. We have “Location Location Location” where you run a business in a shitty area so you have to make us want to shop there.

And what’s cool about your prompts is that they can go so many different ways with it.
JR: Yeah, sometimes if someone is really nervous about the show, I’ll just be like, “Don’t even worry about it, just do what the fuck you want. The more you fuck with the format, the better for me.”

John Ross and Jesse Jones will be presenting the Five Year Anniversary show of Stab! at Luna’s Cafe (1414 16th St., Sacramento) on Feb. 21, 2018, at 8 p.m. Tickets are only $5 and this show is expected to sell out, so show up early! You can listen to new and old episodes of Stab! at Stab4gold.com.