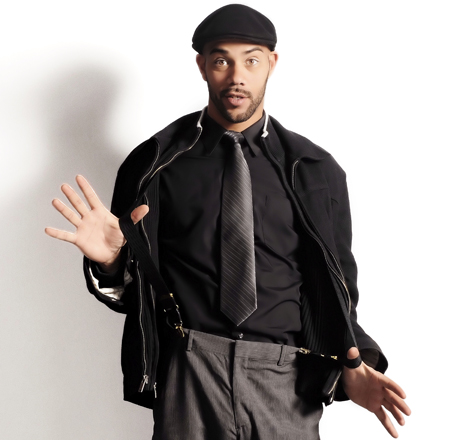 It’s 10 p.m. on a Sunday and I’m in a bowling alley bar with the hottest girl in Elk Grove (her claim) and local comedian Ellis Rodriguez. The topic of discussion: who has the best life ever? The 22-year old Elk Grove girl swears up and down it’s her, since she coined the phrase “best life ever,” but her mom has to drive her home for political reasons. I feel as though I’m disqualified from the competition because I’m drinking in a bowling alley bar in South Sacramento. But Rodriguez is the closest to actually living it because, as he puts it, “I draw comic books and I tell dick jokes. That is the best life ever.”

I meet up with Rodriguez the next day at the Stoney Inn a couple hours prior to its open mic night, which is complemented by country karaoke night in the adjacent room. What type of crowd attends this open mic, I ask? “Random assortment of mostly urban comedy goers,” is his reply. This is the trenches for a comedian. In a night’s time I receive a crash course in one comedian’s regimen for sharpening his jokes just to squeeze one funny minute out of the week.

His first night up was an open mic at Old Ironsides. He says with conviction that he became a full-time comic the day he got on stage, but at the time he did not have a job standing in the way. Rodriguez was living out of his car, working comedy at night for three months before a friend got him a job as a branch manager selling wholesale toilets.

“I was branch manager/trainer/operations recruiter for the number one wholesaling plumbing company in the world,” he says. “Great company. Great people. Couldn’t fucking stand it.”

He gave his days to toilets, but the nights were long drives to San Francisco to wait around at open mics for opportunities to do five minutes on stage. Keep in mind it is comedy courtesy to stay until the end.

“Once I drove to Pleasanton for an open mic,” Rodriguez says. “Another comedian told me about it, and I looked forward to it all 12 hours of my shift that day. I got into work at 4:30 [a.m.] that day. At 5 [p.m.] I headed straight there after work only to arrive to an empty bar that wasn’t even open. I heard there was some stage time in San Francisco so I went to get some time only to arrive and be told that I ‘might be able’ to get some stage time. I stayed until the end that night, desperate for time. I was the last one called up at 11:14 p.m. I got home at 1 a.m. and it was inventory week. I had to pull a 12-hour shift again the next day. Par for the course.”

Now a full-time comic, Rodriguez employs a strict regimen that includes open mics Mondays through Wednesdays and paid gigs at clubs on the weekends. The drive I ride along for begins on Del Paso Boulevard, treks up to Folsom and then over to Roseville. He’s never alone, though. His 2-year old Italian Greyhound named MuÃ±eca rides along. “Tonight I’ll do three [open mics], tomorrow I’ll do two, Wednesday I’ll do four or five and then work the weekend,” he says. “It’s one of the few things I’m actually regimented about. There’s no excuse. None of the mics start before 8 [p.m.]… you can get up by 8.”

Rodriguez goes up around 8:30 p.m. at Stoney Inn to the crowd he predicted. Minutes before he goes up, he’s in my ear scrolling through his cell phone notes, running jokes by me that he might try out. It’s a fleeting moment of meekness. The related fragments have potential, but it’s when he takes the stage, assuming a confident persona, that Rodriguez discovers exactly what it is about “testing out white slavery for a month” that makes people laugh. Rodriguez just secured another minute toward his full hour set.

“I write around five to 10 minutes every week,” he says. “If you write 10 minutes, then one minute is going to be good. You keep that minute. At the end of the year I’ve got another 52 minutes.”

Rodriguez is in his fifth year of standup, tirelessly logging hours and pages of notes. He records all his sets, reviewing the tape like a scouting coach hoping to find flaws and room for improvement. “I do black rooms, white rooms, alternative rooms,” he says. “I do every room I possibly can to get as good as I can be in that room. You have to be able to read an audience and know how to react to it, but not necessarily think that once you crush it for 10 minutes that you’ve conquered that room. Can you do it again with different material?”

An hour later we’re at Po Boyz Sports Bar & Grill in Folsom and, save for three 20-somethings having a night out and the owner’s friends, the room is littered with comedians waiting to get up. Cheryl the Soccer Mom from the Real Funny Housewives of Rio Linda is hosting, and a young comedian is on stage venting about being excluded from the News & Review’s comedian feature. It’s a hostage situation.

Unfortunately it creates discomfort in the room that seems impenetrable as several comedians to follow struggle with the sound of silence. Rodriguez embraces the awkwardness and begins riffing hard on his friend Samm Hickey, who’s in the room. He tries out an AIDS joke we’ve discussed a few times that has yet to reach its full potential. We step outside to smoke a cigarette after his set and casually discuss the dos and don’ts of STD jokes. To him there’s something undeniably funny about saying his friend, who was recently diagnosed with AIDS, having “double AIDS,” even if it didn’t go over well the previous night in Elk Grove.

“I think I did all the herpes things,” he says. “I did most of the crabs thing, but they were really uncomfortable. I think there were a couple people that had that shit. I wanted to write another STD joke, but I’ve found that nobody knows enough about gonorrhea or syphilis for it to be funny. It’s just gross.”

Throughout the night I gather insider knowledge about the ideal crowd from Rodriguez and overhearing other comedians relate stories. Rodriguez tells me it was not the crowd itself, and never should be blamed, that made his Elk Grove show difficult, nor is it the presence of a bowling alley in the next room. An ideal room is dark, slightly chilly and compact. One comedian stressed the importance of seating the audience in order to prevent a scattered crowd.

“The crowd was too spread out so they are able to form a consensus of what’s funny within their little groups,” Rodriguez says of the Elk Grove gig. “They didn’t have to worry about what the people around them were feeling. That contagiousness of laughter is what makes it easy. But, if you can kill that crowd, then you’re going to destroy whatever show is set up properly.”

It is nearing midnight and we’ve arrived at the Boxing Donkey, a narrow Irish Pub in Roseville, for our final open mic. The bouncer asks that Rodriguez, a former Marine, tuck in his tags and Jesus piece–apparently they’ve had chain issues previously.

I ask Rodriguez about his time in the military, considering he was always a jokester growing up. “I was not a good Marine, at first,” he says. He was 19 and distracted with partying instead of attending his college courses when he decided to join the military.

“I’ll join the Marine Corps because they’ll make a man out of me,” he says. “I realized very quickly that Marine Corps does not make a man out of you. It gives you the opportunity to be a man. It puts you in situations where you’re pushed and strained. You’re constantly being tested and the choices you make, make you a man or a Marine.”

The Marine Corps wasn’t all precision posture, firm salutes and combat training, though. Rodriguez says there was still room for humor. “One of the things we did was send a person to retrieve an ID10Tango form on the other side of the base. They’d show up and the people there would say, ‘what are you doing here, you get that from ADMIN first, then ADMIN would say, ‘you need an ID10Tango release from your unit.’ They would come back and someone would finally tell them to write down ID10Tango. I. D. 10. T.”

It is nearing 1 a.m. when Rodriguez seizes the mic at Boxing Donkey. The room is brightly lit, less than ideal, but it gives him a visual on the room’s reaction. By now he’s told the bit about being so drunk at a Halloween party that he actually thought he was Superman for the third time in the night, but he is orating with the proper emphasis and pauses to make absurd glances to pull the most laughter. He takes notice of a group of black men not laughing much by the bar. “I’ve got one for you guys,” he says and launches into the white slavery bit, winning over the doubters with a blindside punch line.

I don’t get back to my Malibu parked on Del Paso Boulevard until 1:40 a.m. The Stoney Inn is long closed, I’ve got a burger in my hand from Jack in the Box and a guy on a bicycle is circling Rodriguez’s car giving us weird looks before pedaling off. He tells me he’ll wait until I get in my car before he drives off. It’s par for the course for Rodriguez, but for me it’s damn exhausting.

“I’ve got hours to log,” he says. “You keep coming back until you get a nice easy room at The Improv opening for Bruce Bruce and you’ve only got to do 25 minutes, but you’re going to kill because you did all these gigs at crappy open mics working out new material in bars and bowling alleys.”

Ellis Rodriguez will perform at Tommy T’s in Rancho Cordova on April 28, 2011. This will be a live DVD taping. Also performing are Dennis Martinez and Hunter Hill. This 17-and-over show starts at 8 p.m.