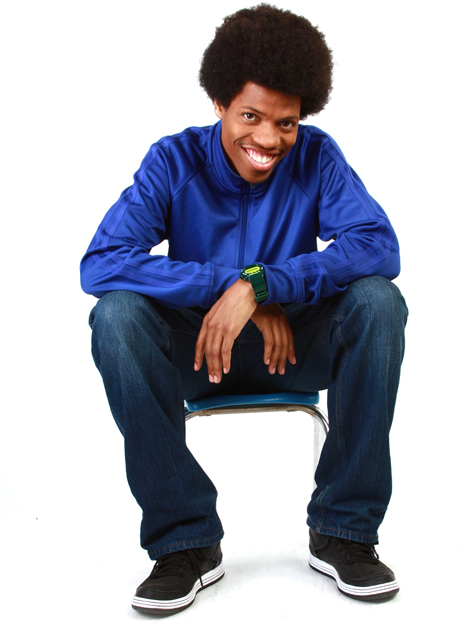 With a performance on The Late Show with David Letterman airing in the near future, Mike E. Winfield has succeeded in dropping the “local” prefix from his title of comedian. In fact, the local label has been absent for some time, given Winfield’s appearances on Last Comic Standing, Comedy Central’s Live at Gotham, and various comedy festivals and competitions.

After eight years deep in comedy, 2010 could be his breakout year–Mike officially quit his day jobs to pursue comedy full-time. He attributes his success to a dedication to the craft and inspiration from New York Times bestseller Outliers and its 10,000 Hours Rule, which states that greatness in a specific field requires 20 hours of work per week over 10 years. “Certain people aren’t successful just on talent,” he said. “It’s the people who mix talent with opportunity. When I do shows, if it’s in my power, I stretch it to make an hour show an hour-and-15-minute show. It’s an art. That’s what it is. I’m working on this artistic form all the time. Putting it out there and getting a Facebook request a day.”

So far, he’s stayed busy. He touched down in Sacramento the day we arranged an interview, fresh off a flight from Nebraska–“yes, Nebraska, Nebraska,” he confirmed. Two months prior to his stint in Cornhusker land, he did a U.S.O. show in Okinawa, Japan. This month, he’s treating his hometown to a headlining show at the Punchline. “This one has the most buildup,” he said. “It’s from an accumulation of being on stuff. More people recognize me now.”

So I read on your blog that you went snowboarding once, and it’s going to be the only time. What happened that was so traumatizing?
I hit a little kid, man. I was dumb. I forgot to learn how to brake before I went to the more advanced slopes. I was doing full speed and this kid was coming horizontally. I see the kid from far away coming toward this perfect intersection.

I kept thinking, “No, this is not about to happen;” that poor little girl, man. She had on pink and her skis ended up stuck straight up in the snow. I played like I was hurt so I wouldn’t look like a dick. Her dad yelled at me. My friend, who I will never hang out with again, he was like, “You should probably apologize.”

It was fun up until that point. I didn’t even have the right attire. I just put on a whole bunch of clothes. I had Vaseline on my face because I heard it would keep me warm.

I feel like somebody played a joke on you with the Vaseline thing. You also just got back from Japan?
Yeah, I was in Okinawa for a military show. There are troops stationed out there. You want to talk about people who appreciated a show. You didn’t want to leave. There are some bad situations out there. You feel for the troops. They are working hard. A lot of them don’t want to be there. There’s nothing to do. All their outlets are alcohol and clubs, just drinking, waiting for their time to pass.

That was my first one, and I’m down to do more. It felt like I was giving. I am doing what I’m supposed to be doing in life for the right reasons finally.

Are there any weird cultural experiences you had?
The fact that all the vehicles were the same things we had, but smaller versions of them. That struck me first.

Did you earn your stripes in Sacramento?
Yeah, I think I first got on stage at Laughs Unlimited. My first work, I did a weekend at the Punchline, then the following weekend I was booked at Laughs Unlimited. So like my first week of work was two back-to-back weeks. It just didn’t stop. I felt like a new person because I was getting a lot of work. I think it was because I was really clean. It’s opened up a lot of doors.

Would you still consider your material to be clean?
I have my times. Lately I’m on being whoever I am. I just want to be myself and have people say, “Yeah, I’m going to see this guy because he’s funny,” not because, “He does dances and then a flip at the end.” I just want them to go because they think Mike E. Winfield is a funny dude.

I read that you consider your college speech class your start at comedy. Is there truth to that?
As soon as I’d walk in front of the class they’d just start laughing. I would talk about how to make a Whopper. I didn’t have any intellectual speeches. I’d get grades on the delivery, but the content would get Ds. The professor said to just try [standup].

It was fun. I wish I could take another speech class to make up for what I did back in the day.

Whatever happened with the pilot you did with Bobby Lee of MadTV? I take it that didn’t get picked up? Are you trying to break into television and film?
That was like two and a half years ago. It just didn’t get picked up. I’ve been in some other stuff. I’ve decided this is my goal: I’m just going to do standup until I’m happy with the product I have from it. When I’m ready to pitch my own show, I’ll already have my sitcom ideas. If somebody gives me an offer, I’ll do it. I’m just not going to audition for some crap I don’t want to be in anyway.

You look at the greats. They came up with their own product. They had a fan base from standup or whatever else, and they pushed their own stuff. I enjoy standup too much anyway.

Why is it important we include the E. when printing your name?
Right now, it sticks out. The E. has a ring to it–just a little. That’s going to be my thing. Remember when Puff Daddy changed his name? When I get big I’m going to drop the E. That’s how you’ll know. I’ll even throw a press conference.