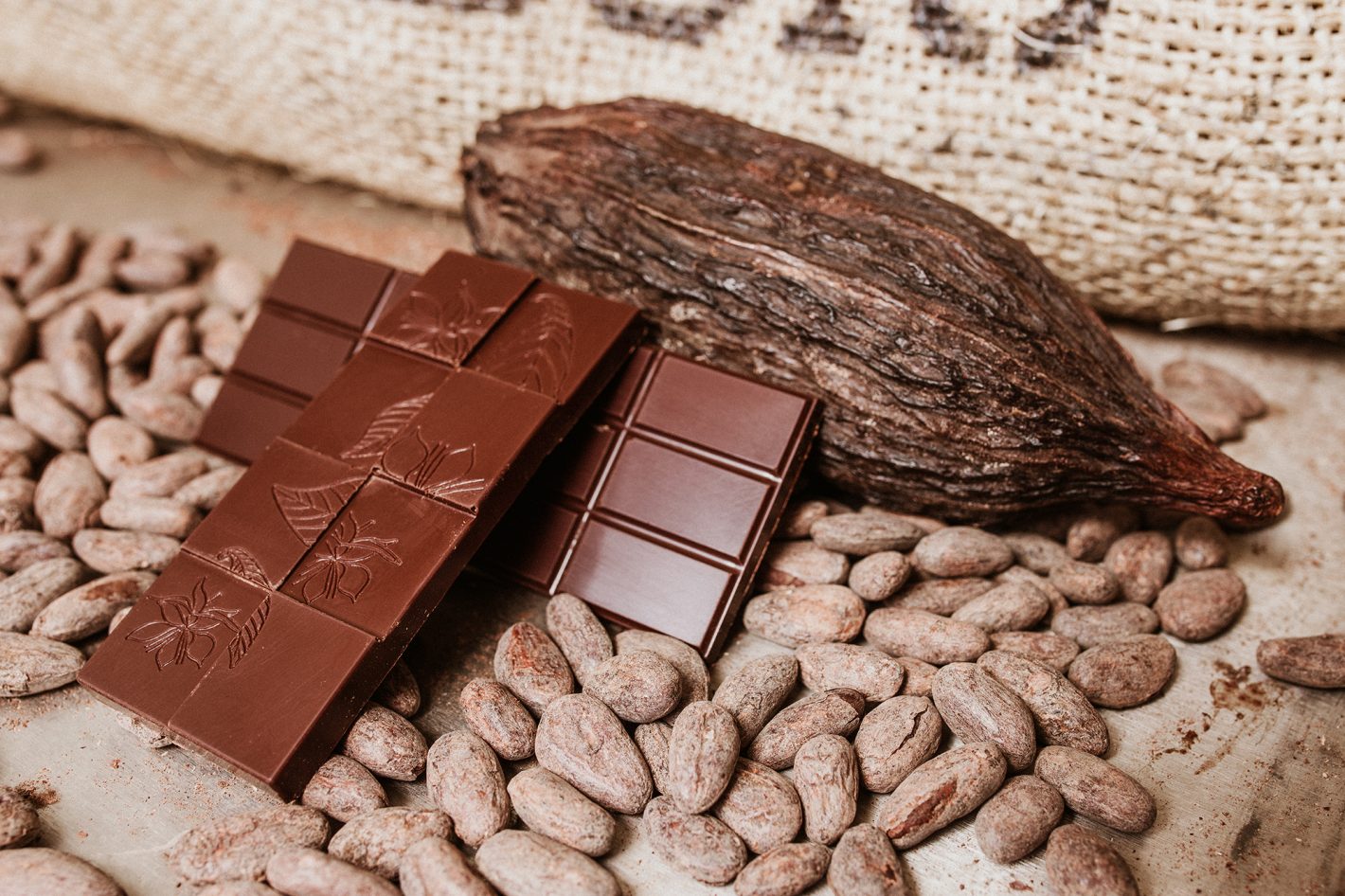 You would never know it, but there is ancient magick at work in the suburbs of Roseville. Down a nondescript street, in a simple two-story house, a husband-and-wife team is performing alchemy that wins international awards.

Karla McNeil Rueda is a Honduran-American with a heart-shaped face framed by wild curly hair and a wicked sense of humor that regularly evokes a laugh from her husband, Eddie Houston. He is a tall, lean fellow with a warm, soft voice. I thought I loved chocolate, but these people live on another chocolate-y plane altogether.

Rueda and Houston started their business with a pretty simple principle: Chocolate is not a luxury or a treat; it’s a birthright. For thousands of years, across much of the Americas, cacao (which means “bitter water”) was staple sustenance. Nutrient rich, versatile and freaking delicious, cacao was used by Mayans and Aztecs as a morning beverage in the same way we drink coffee—as a reward for getting out of bed. 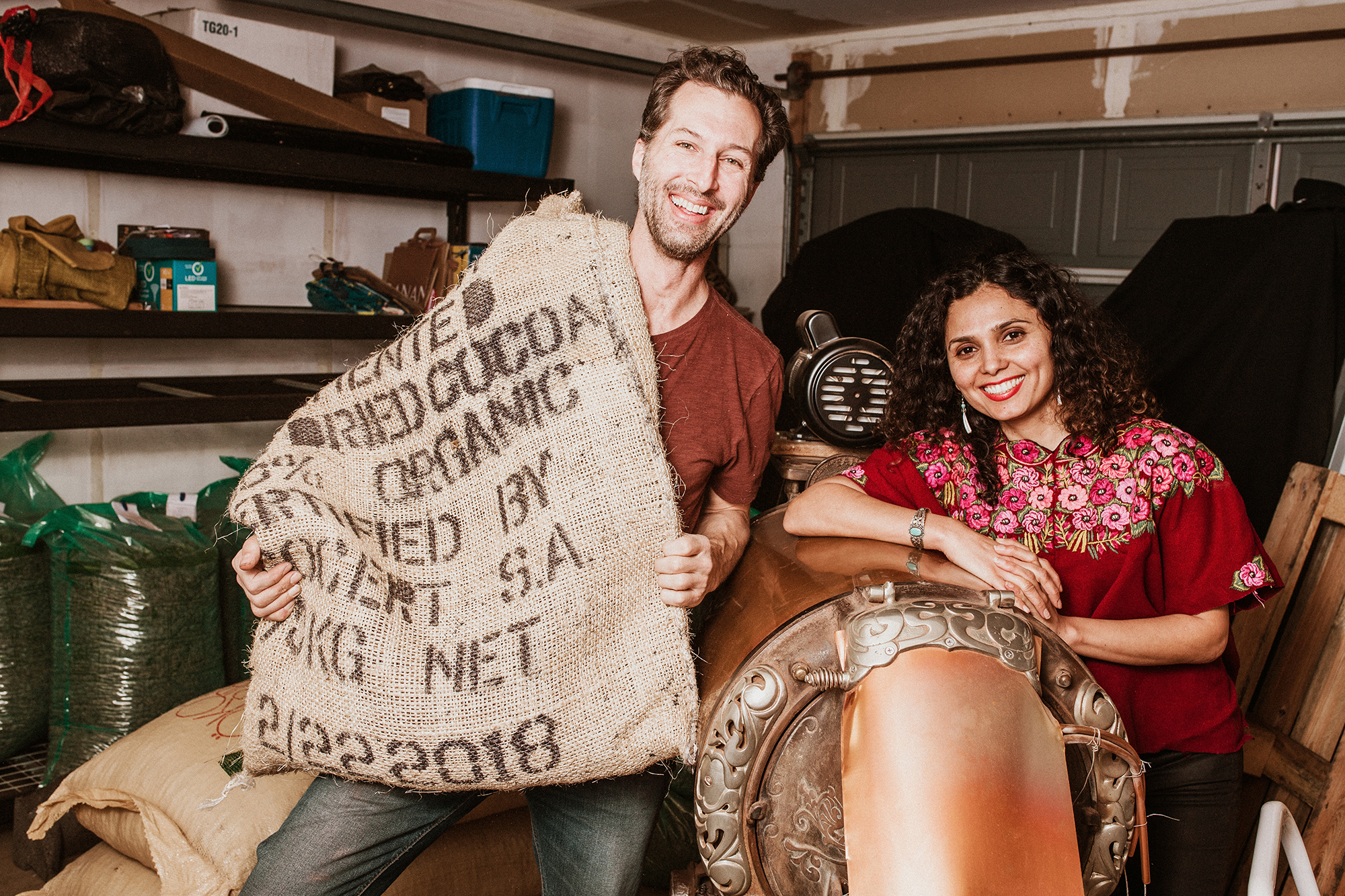 Cru receives 150-pound jute bags of beans from farmers that they know personally from Haiti, Dominican Republic, Nicaragua, Guatemala and Honduras. Houston opened one of these bags so I could stick my face in it and smell the bright vinegar earthiness of the fermented cacao.

In their garage, a magnificent roaster from 1910 that looks like a big copper pig gently toasts and ventilates the raw beans.

“We bought it off of Craigslist,” Houston tells me. In fact, that applies to just about every piece of equipment they use.

After the beans finish roasting, they go into a plain old, consumer-grade juicer with a rigged set of tubes that grinds them down and rids them of their shells. Rueda and Houston tell me that the ladies in Guatemala can actually do it faster than their homemade contraption. All the shells go into the compost.

Now the metamorphosis happens: They pour the nibs into a stone grinder—a big steel vat with three stone cylinders where the cacao will transform from little, bitter brown crumbs to a rich swirl of aromatic chocolate. There is enough cocoa butter in the ground nibs that aside from a modest amount of cane sugar, they require nothing but time. It takes approximately eight days of steady grinding in the stone mixers so that the crystals break down finer and finer. 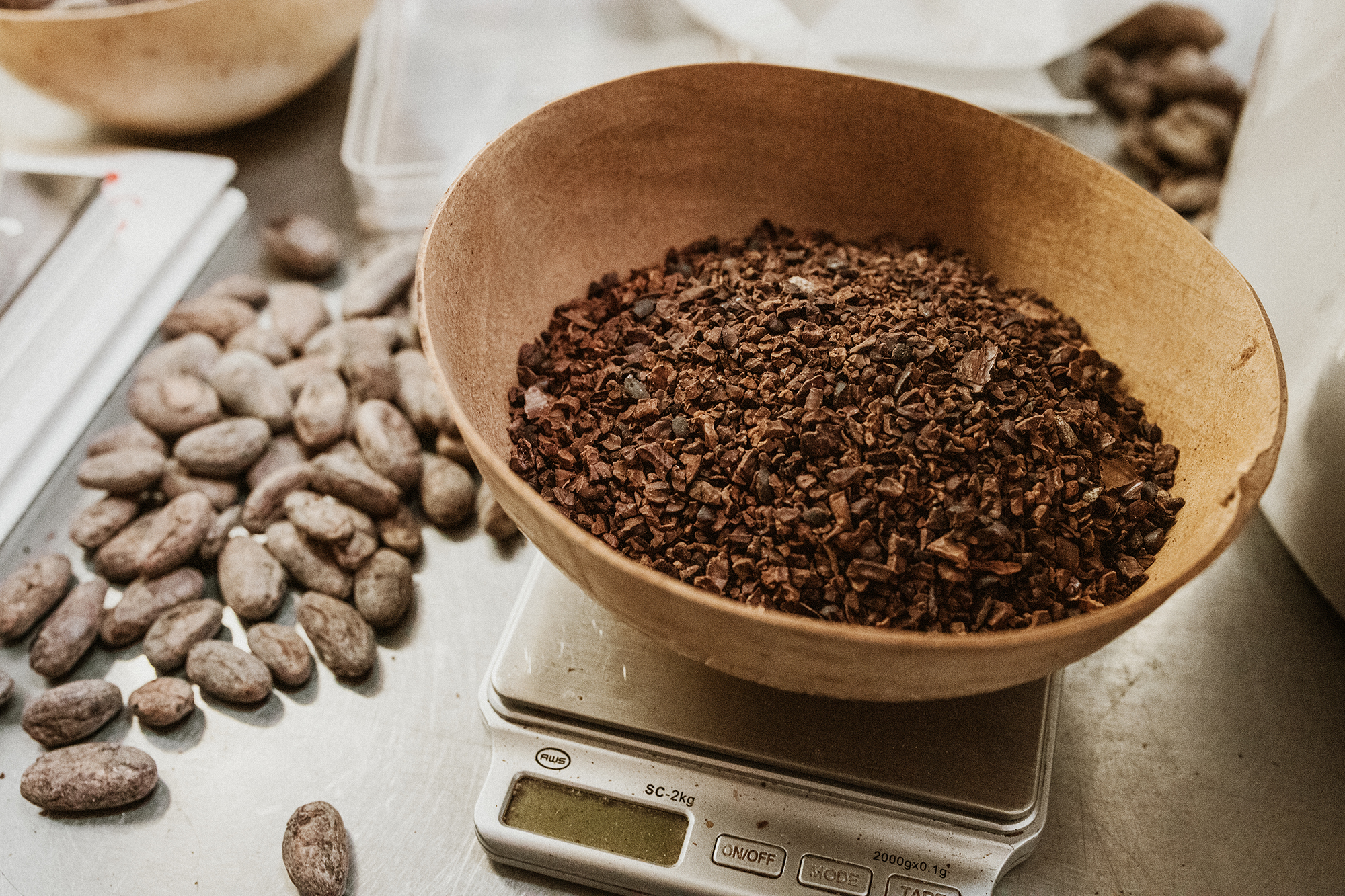 The chocolate must then “settle,” Houston explains, so it goes into cooling trays where it re-solidifies into big chalky blocks. After the chocolate gets a chance to chill out for a few days, they gently warm it to melting, and then add ingredients to adjust each batch. They don’t use a recipe, though; Rueda just keeps tasting and blending until she’s satisfied with the results.

The melted finished product goes into smaller molds to cool a final time into shiny shingles of heaven that are stacked all around the kitchen and living room. Rueda and Houston sit at their coffee table and lovingly fold a piece of foil around each bar like origami, finishing it with a recycled, soy-inked label and hand-writing the batch number and date on the back. 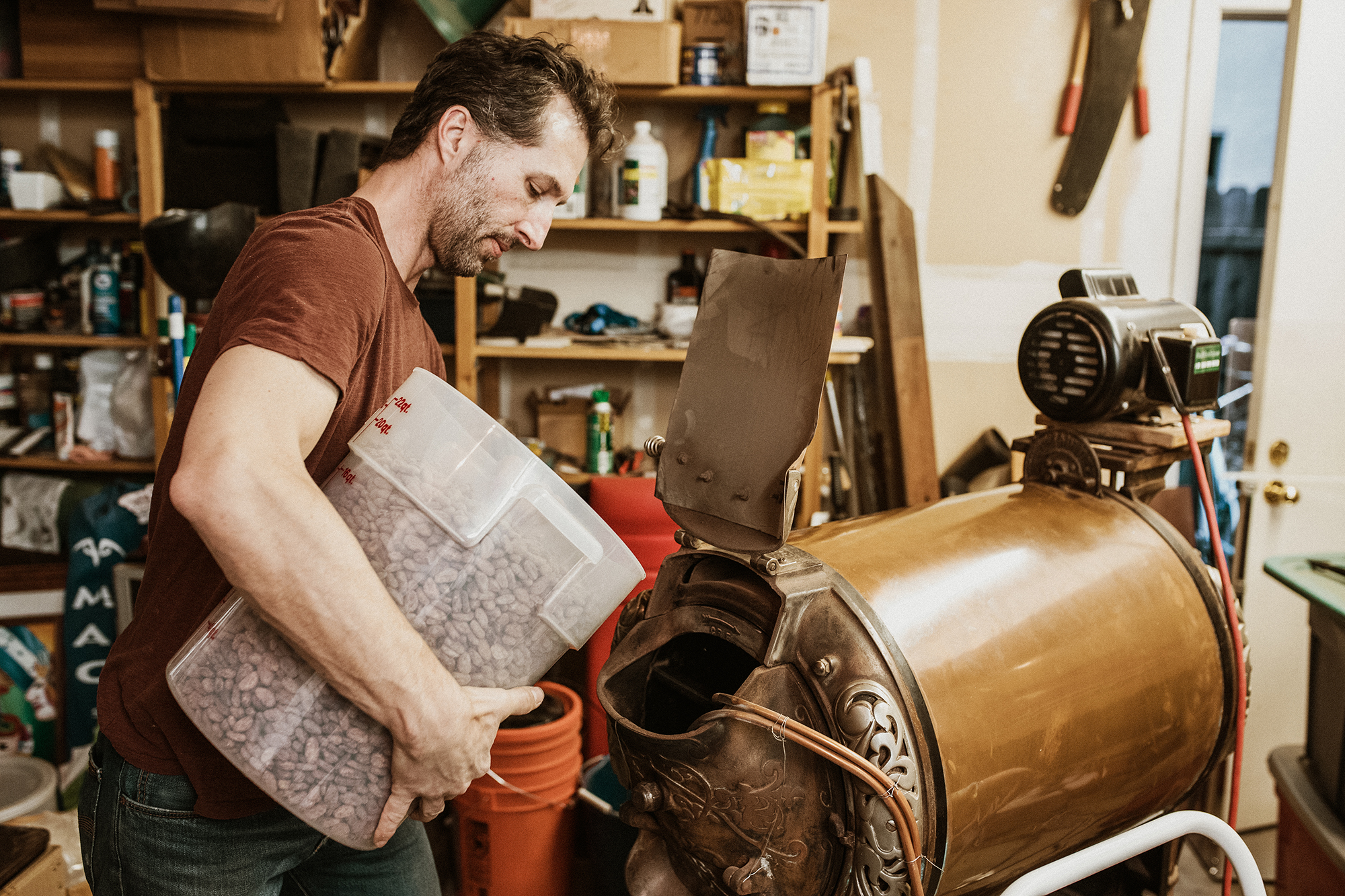 For these chocolatiers, their work is participation in an ancient ritual and a quiet act of revolution.

Rueda grew up among these holy plants that flourish right alongside her family’s coffee farm. The ritual tending, harvesting, fermenting and processing of beans were part of her daily life. She received a scholarship and studied industrial engineering at the Catholic National University because she wanted to help improve processes for farmers. Specifically, she wanted to help bolster these producers against the rising threat of increasingly powerful storms.

She met a man and fell in love, which brought her to the United States, and had two children, although the marriage didn’t last. Her first jobs here were in factories, sometimes working right on the assembly line. Management, however, quickly realized how much practical knowledge she brought to the table. At one plant, she designed a workflow system that enabled companies to hire disabled folks for the first time. 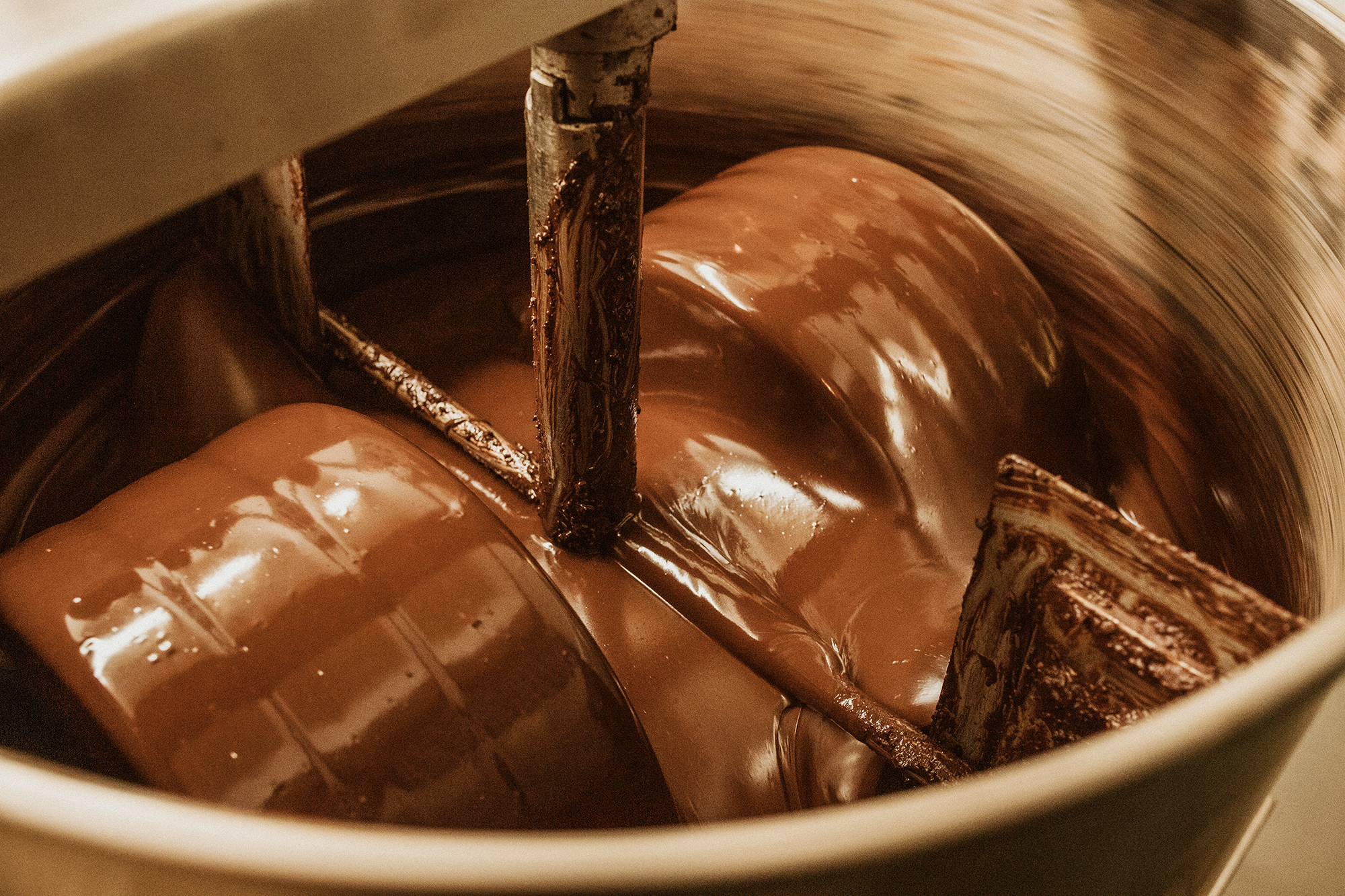 Houston, meanwhile, grew up in Chico, studied computer science and worked at Hewlett Packard for 18 years, ignoring the entrepreneurial itch that had haunted him since he was a small child. The tech workplace had shifted so radically that he became increasingly unhappy. He met Rueda at a yoga class in 2012. They were both into food and actively seeking ways to simplify their lives. They were already saving and dabbling with the idea of producing chocolate when he got laid off from HP literally one day before his planned early retirement.

“It was a blessing in a lot of ways,” he says. “Now we are more time-rich. We can spend time with the kids and travel to Central America.”

As a massive juxtaposition to the corporate culture from which he had been ejected, Houston discovered kindred spirits in the craft chocolate world. Those makers whose primary commodity is the uniqueness of their product are happy to share manufacturing tricks because even if the process is identical, it’s the maker’s knowledge and creative choices that the consumer seeks out.

Cru is selective about where they sell their wares—often coffee shops, online, boutiques—and they have found valuable partnerships within the booming craft brewery scene. Cru’s nibs are a dreamy ingredient added to stouts and porters.

In their commitment to the communities and ecologies who produce their main ingredient, Cru is determined to keep the origin of the chocolate to five or six regions so that as they scale, they can have a bigger impact on the farms. 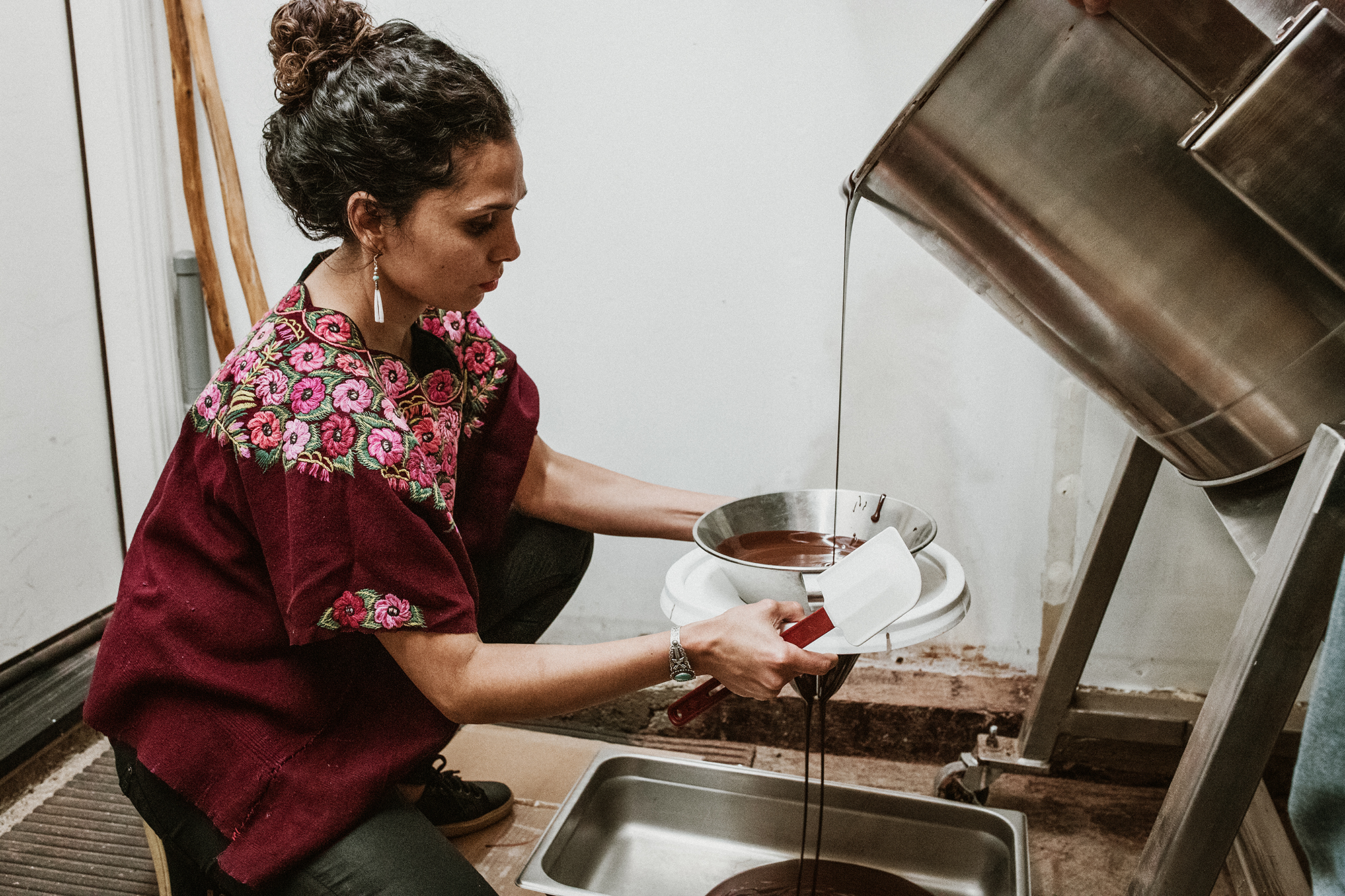 My favorite was the Flor de Maíz, which is Nicaraguan cacao blended with heirloom corn and spices. It’s pungent and the corn gives it a creamy sweetness that just keeps unfolding as it melts. For a moment there, I thought I was back in the womb.

These are flavors that come together so naturally that they are ubiquitous without most of us even realizing. As Rueda pointed out to me, Coke is actually just a modern, carbonated (and synthetic) version of the ancient drink derived from the cacao plant. It’s chocolate, caramel and—in America—corn syrup.

According to Rueda and Houston, we crave commercial junk because it’s just a ghostly trace of the original source that supported us through much of our existence. They actually teach workshops on the origins of these staple crops and how they help us develop communities and regional identities.

“Plant enough for everybody,” Rueda tells me is the saying among the farmers, because planting cacao is really establishing a forest. It’s an invitation to squirrels, jaguars, birds, mushrooms and insects. When you buy a bar of Cru chocolate, you aren’t just supporting farmers; you are also supporting biodiversity. Some of these creatures of the cacao feature on their labels. 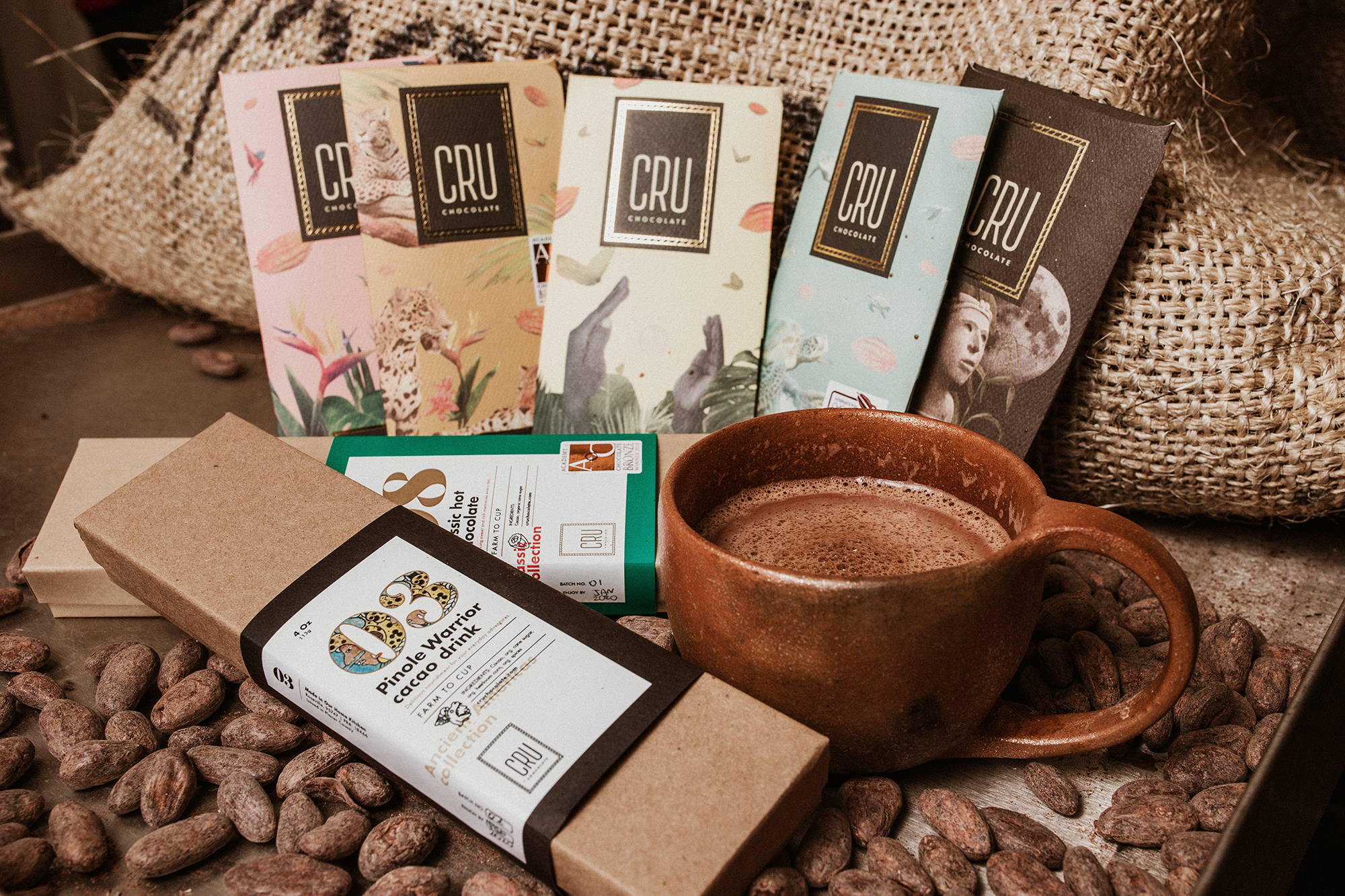 Cacao is an ecosystem unto itself, or as they say in Columbia, “a seed within a seed.”

Last year, Cru won eight awards in chocolate competitions. This year, they are considering, in the most laid back way possible, moving the operation so that they can meet the demand. But they are reticent to leave because they really enjoy working from home. After all, if you could stay at home with the person you love and make chocolate all day, why would you want to do anything else?

Feeling a bit of a sweet tooth yet? So are we! Find Cru Chocolate throughout the United States, but check out Cruchocolate.com/find-us for a list of retailers around Sacramento and the West Coast.