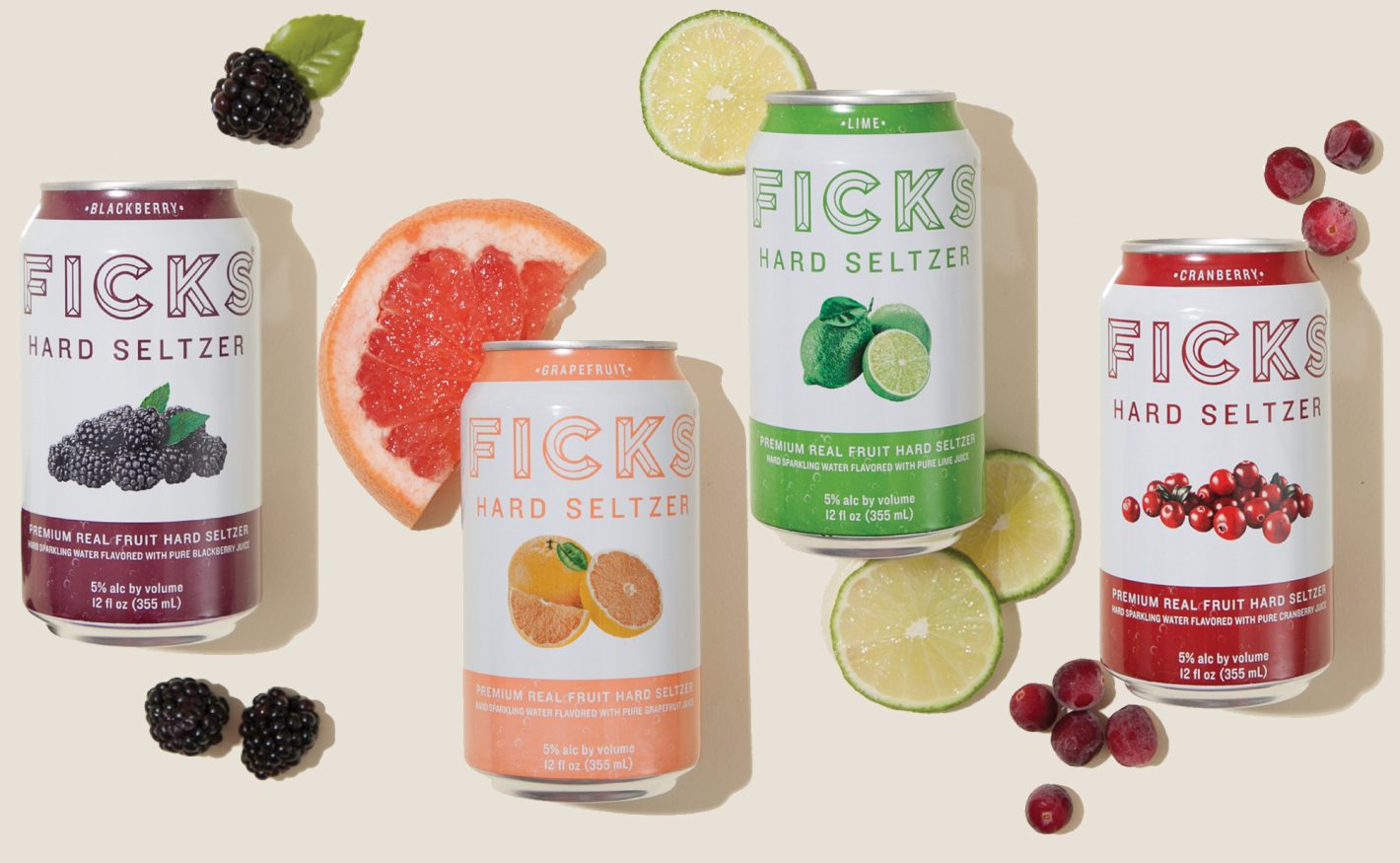 Consumers are ditching the sweetness of sodas and sugar-dense cocktails. They want a healthier alternative and are more conscious about what they put in their bodies. With that in mind, masses are reaching for flavored seltzers because they’re low in sugar and have little to no calories. With sparkling waters skyrocketing in popularity, it’s practically a no-brainer that beverage companies would soon start to add alcohol to that hip fizzy bubble water. Enter Ficks Hard Seltzer.

In Summer 2019, it was almost impossible to head to a bar or party without seeing someone with hard seltzers like White Claw or Truly in hand. Though these tipsy beverages with “Natural Flavors” seem like a healthier alcoholic option, typical hard seltzers create fruity taste with a cane sugar and syrup mixture or malted barley blended with chemicals, like those found in classic soft drinks.

This isn’t the first time alcohol and sparkling seltzer attempted to form a delicious coupling. Zima, a hard seltzer of the ‘90s, was ahead of its time, but the world wasn’t ready for this low calorie change just yet. Almost 20 or so years later and the one time “fad” of hard seltzers is now poised to stay.

With people looking for this type of sparkling delight with easily recognizable ingredients, what can they drink instead of the big conglomerates? That’s where Ron Alvarado comes in with Ficks Hard Seltzer. Submerge got the chance to chat with Alvarado, the CEO of Ficks, about the process of creating hard seltzers and how Ficks is a better way to drink alcohol.

Alvarado says, “We [he and Ficks COO Mike Williamson] both really liked cooking and mixing cocktails but,” like many college students so close to a diploma and trying to live a metropolitan lifestyle, “starting a company so close to graduation just wasn’t a reality with rent in the Bay Area.”

Since their senior year in college, Alvarado and Williamson were trying to create a product the world of food and beverages needed. But with the pressures of making money immediately after college, the two, in turn, went into finance.

Alvarado was working in private equity while Williamson worked in investment banking. Though it was work, work, work during the day, they began making what would be Ficks in their spare time. Pencil pushing in Silicon Valley wasn’t a bad way to make a living, but the two young entrepreneurs wanted to make a splash—or rather a fizzle—with their alcoholic bevies.

At first they were interested in exploring the possibilities with wine. They found a local home brew shop in San Francisco and put large fermentation tanks in their kitchen. It became something like a laboratory, and the two future “seltzer scientists” found success in making cocktail mixers out of pure fruit juice.

Alvarado recounts, “We originally [became] a non-alcoholic cocktail mixer company. We didn’t like how cocktails had so much sugar. The mixers led us to trying to continue our mission of finding a drink with low sugar, low calories, but with alcohol that also represented Northern California.”

Currently, Target and BevMo are the largest clients of Ficks cocktail mixers.

In 2016, Alvarado and Williamson decided to head into a new direction. They liked the hard seltzer space, but there were already big key players; White Claw and Truly began to emerge as stiff competition. The two young entrepreneurs were interested in the product but didn’t like all the long-worded, hard-to-understand ingredients found in competitor drinks. So with little sugar and fresh cold-pressed juice, Ficks has made a hard seltzer with less complicated ingredients so consumers have better knowledge of what they’re drinking.

Alvarado details that at first Ficks wanted to ferment each individual fruit into a wine to blend and flavor the hard seltzer (for example, fermenting a blackberry alcoholic base for a blackberry hard seltzer). But this was not a good idea.

“Grapefruit wine was the grossest,” the Ficks CEO recalls, “Oranges tasted smooth and fermented very quickly to the perfect [alcohol] base. So in the end of every mixture you can’t even taste the orange sparkling wine at the center of it all. The orange sparkling base tastes like a very dry white wine while the fruit’s natural sweetness mixes with sugar for yeast to eat, to increase the ABV [alcohol by volume].”

With their new hard seltzer, in October 2018, Alvarado tried to sell their product to bars and restaurants in San Francisco and Sacramento.

“Then [2018], most food retailers had the big brands of alcoholic seltzers but no craft cans available in stock,” Alvarado says. “Stores were worried that the type of product would be like the hard soda fad that spiked in sales a few years back but fizzled out in popularity. So when I tried to sell to bars and restaurants, they sort of looked at me like I was from another planet and didn’t want anything to do with the product.” 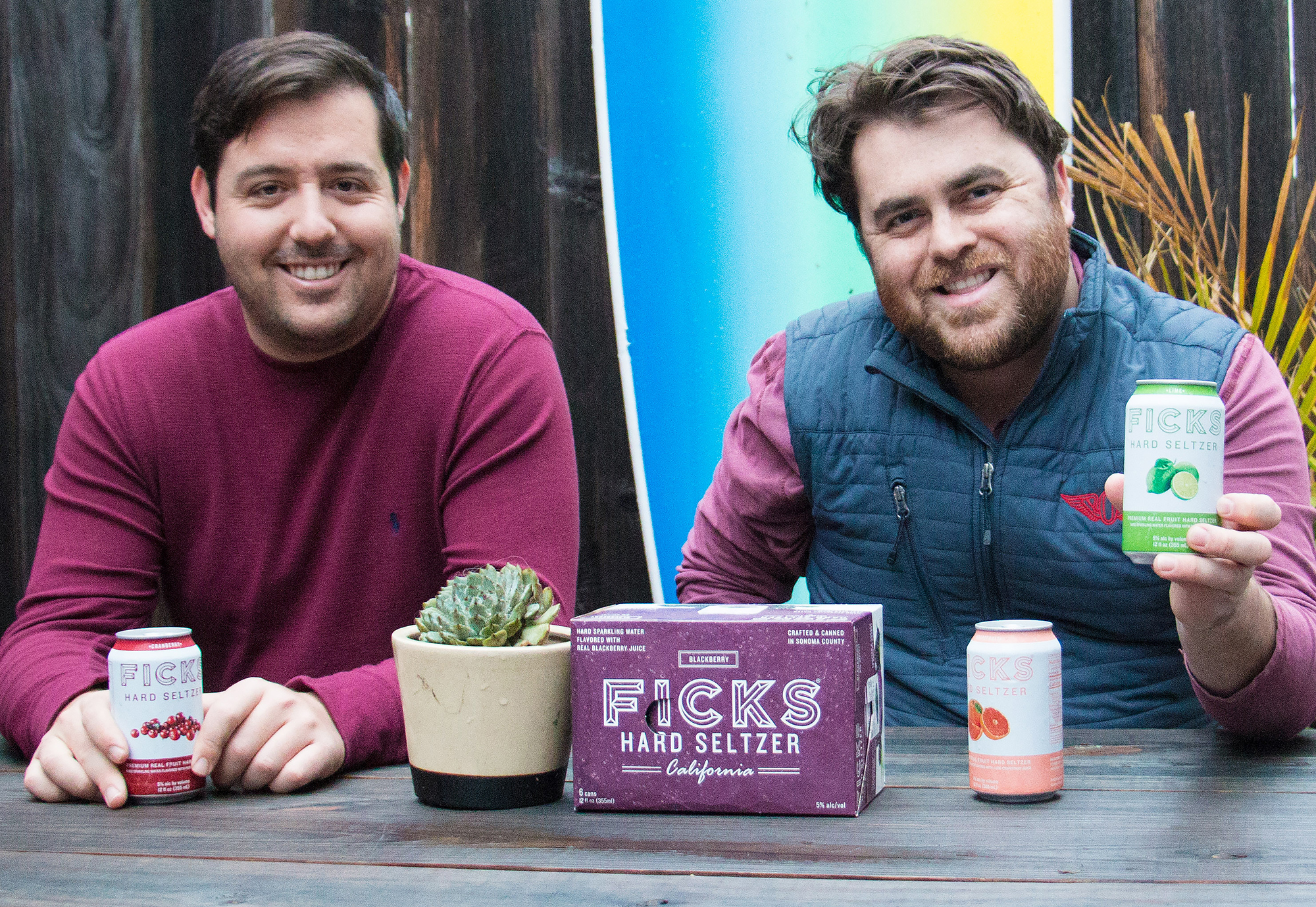 Unlike the fleeting alcoholic soft drink moment (i.e. Not Your Father’s Root Beer), hard seltzers have become a hit across all demographics of legal drinking age. In 2019, hard seltzers were the libation of choice.

From influencers on Instagram, frats at parties, hipsters at Dolores Park or real housewives—everyone was riding the hard seltzer carbonated bubble bus.

While taking a tour of the Ficks canning facility in the small North Bay town of Sebastopol, Alvarado taught us a little about the machinery in the building and the process of making hard seltzers. First, the liquid for each can is created and mixed with actual fruit in large fermentation tanks. It takes two to three weeks for fermentation and Fick’s ferments its product until completely dry when no sugar is left. At the end, the liquid in the tanks ferments to 15 percent ABV, and at some point during activity, the dark concoction turns clear and is ready for canning. A third of each can is alcohol, which means 5 percent per can.

Alvarado explains that, “The alcohol process in making traditional hard seltzers is seriously similar to wine making. Both [Ficks and competitor products] use the fermentation process but differ in how flavors are added.”

In layman’s terms, Ficks uses fresh cold-pressed juice in their fermentation, while competitors like to use a mixture of a malt beverage or sugar ferment while masking their artificial tendencies with the term “natural flavors.”

“Natural flavors” sits on a spectrum, Alvarado explains. What happens with natural flavors is almost like distilling down the actual product to a very concentrated form, and usually mixes that result with an alcohol base like industrial alcohol.

In October 2018, Ficks launched Lime as their first hard seltzer. The pure fruit juice of real limes adds a less intense bite than other hard seltzers, giving the beverage a smoother finish.

In Alvarado’s words, “Ficks is on a mission to use the purest of ingredients for [our] hard seltzers. So we procure fruit from the best locations to flavor our drinks. Instead of farm to fork, we consider what we’re doing ‘farm to fizz.’”

The berries come from Washington and Oregon, grapefruits are from Texas and Southern California, while the limes are from Mexico.

As far as the name Ficks, “It was more a playful way of looking at it,” Alvarado explains, “Ficks tried to ‘fix’ the hard seltzer flavor so you can fix your lifestyle. So instead of F-I-X we played with letters and words to make a similar look and sound. We want to be transparent with consumers and let them know what’s really in their drinks.”

Alvarado told us that some people with the last name Ficks contact the company about twice a month asking if they’re related to the creator. But the name happens to not be a last name at all, despite the title’s looks.

Right now, their newest endeavor is their e-commerce just in time for Christmas. In the United States, people aren’t legally allowed to ship beer unless shipped through big stores with licenses. Since Ficks’ base is a sparkling orange wine, they are able to ship to most states, in addition to selling at brick and mortar partners like Costco and Whole Foods.

Ficks plans to expand to other parts of the United States and to other countries. So far there are distributors in California, Washington and Oregon, and they’re looking to add more states in 2020. Ficks has also made leaps in the sales market by recently launching the hard seltzers in select Raley’s (with some of those stores being around Sac).

On seeing his product on shelves in the 916, Alvarado says, “It’s really cool to have my products in stores like Raley’s. I used to go to that store to all the time growing up.”

Ficks is bringing a fresh taste to the hard seltzer market. Their product stems from health conscious recipes, and their flavors (Lime, Grapefruit, Cranberry and Blackberry) are crafted to refresh and relax.

For more information on Ficks and where you can buy some packs for yourself visit Ficksdrink.com.