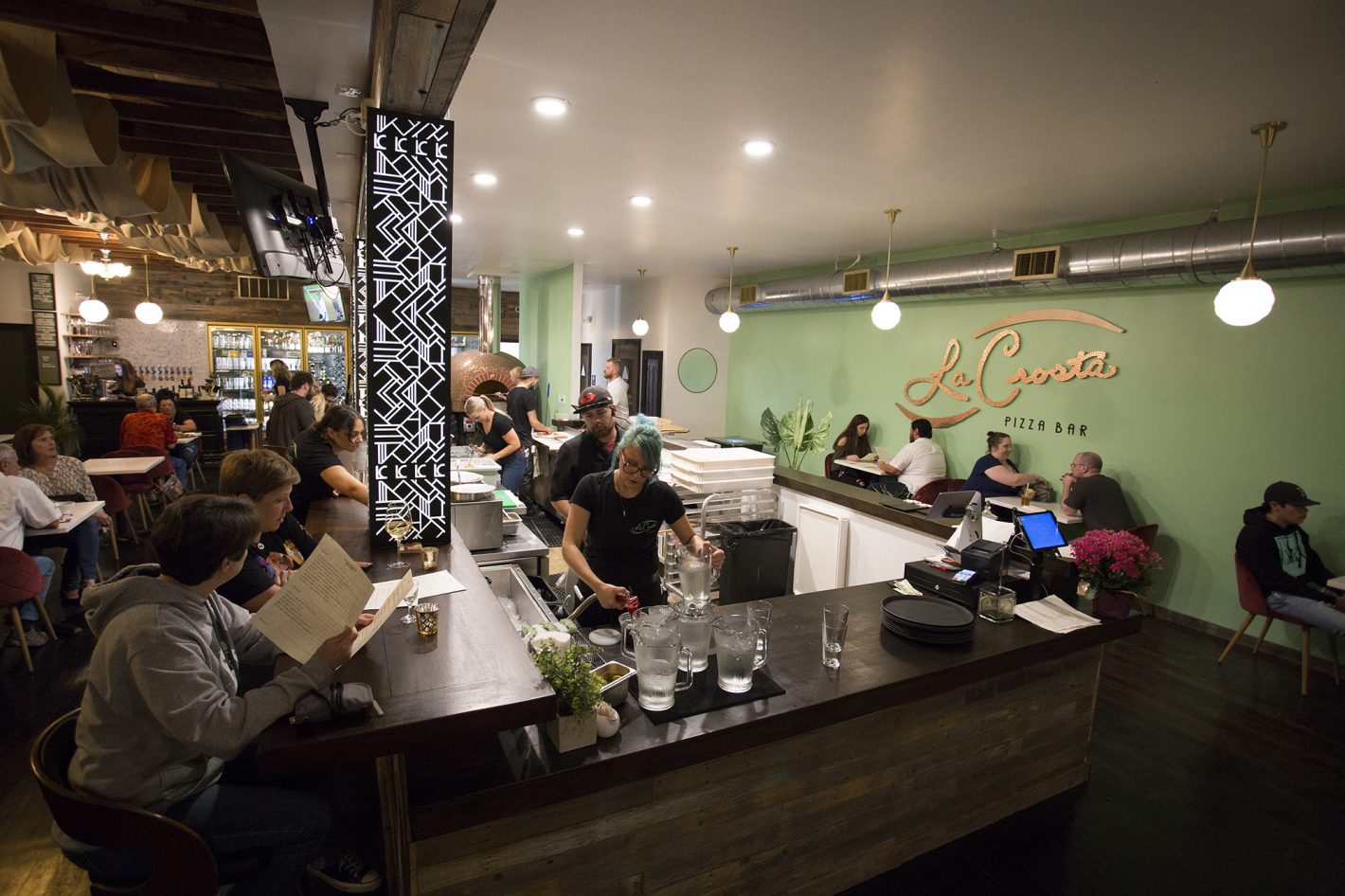 La Crosta Pizza Bar had officially been open two weeks, and word had gotten around about the delicious crust Penelope the Pizza Oven was spitting out. On a Friday night not long after, the place was completely packed with at least a 30-minute wait.

The new pizza joint is a cozy addition to the 3rd Street corridor in West Sacramento—a small, bustling block with an old-school neighborhood vibe. Across the street sits Burgers and Brews in a converted fire station, and next door are Bridgeview Barber, Stone Vintage Music Boutique and the deliciously funky flavors at Devil May Care Ice Cream (La Crosta co-owner Steve Tatterson swears it surpasses Gunther’s). 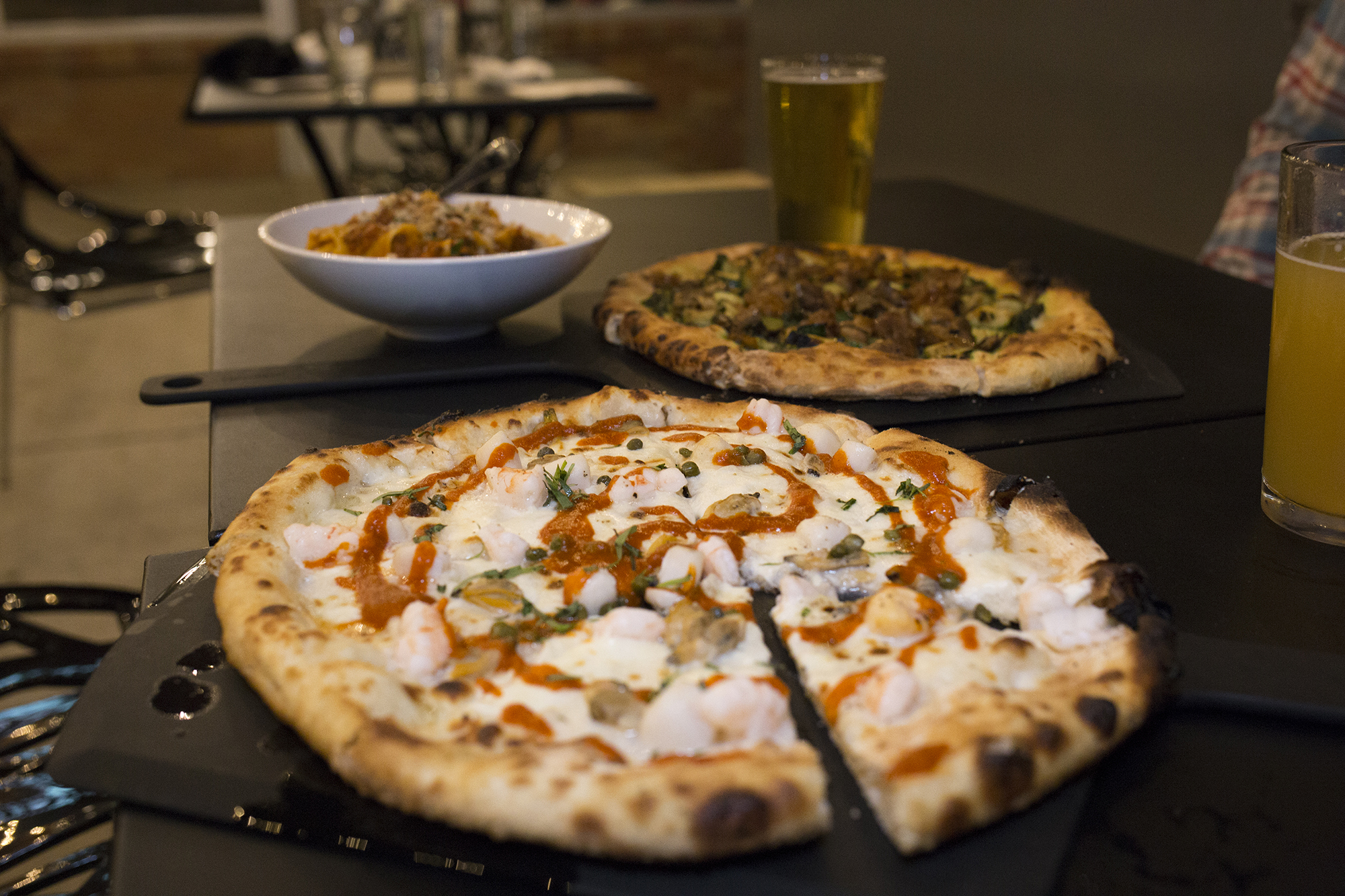 Tatterson and spouse Sara Arbabian—who also own Sacramento cheese lovers’ favorite The Rind in Midtown—wished to open another restaurant right after The Rind wooed patrons five years ago, but some star alignment needed to happen to first.

“It’s not so much choosing to go to West Sacramento as it is the confluence of details,” says Arbabian about finding the right fit. “The location of the space, the size of the space, the landlord, the community, is there a need, do I want to meet that particular need, all of that. Our friends at D&S Development rented out this space, and we loved the community and thought it was a good idea to see what was missing. Pizza is a popular food, and being one of my favorite foods and already knowing bread and cheese, it just seemed right.”

D&S also redeveloped a similar commercial brick building on the R Street corridor in Sacramento that houses Shady Lady and other establishments, and Arbabian says the building era drove her design process for La Crosta, an Art Deco revival marvel.

Local Dallas Dorn designed and installed the sign outside and the intricate lit columns of the massive pizza bar that sits as the centerpiece to the nearly 3,000-square foot restaurant.

The pizza bar is exactly that—watch pie makers roll out dough and layer ingredients before throwing the pies into Penelope’s mouth, perfectly crisping a thin and bubbly crust.

The space used to be an old liquor store and the coolers holding various local wines and beers in back are the original, meticulously scraped and scrubbed by the owners and their friends to present a stunning gold-rimmed glass background when you walk in. The bright white tables, plush purple velvet seats, seafoam green walls, arcade games and string lights outside complete the look, and make it hard not to feel right at home.

Keeping with their Rind traditions and values, Arbabian and Tatterson source their ingredients locally and only buy meat from farmers focused on humane raising. 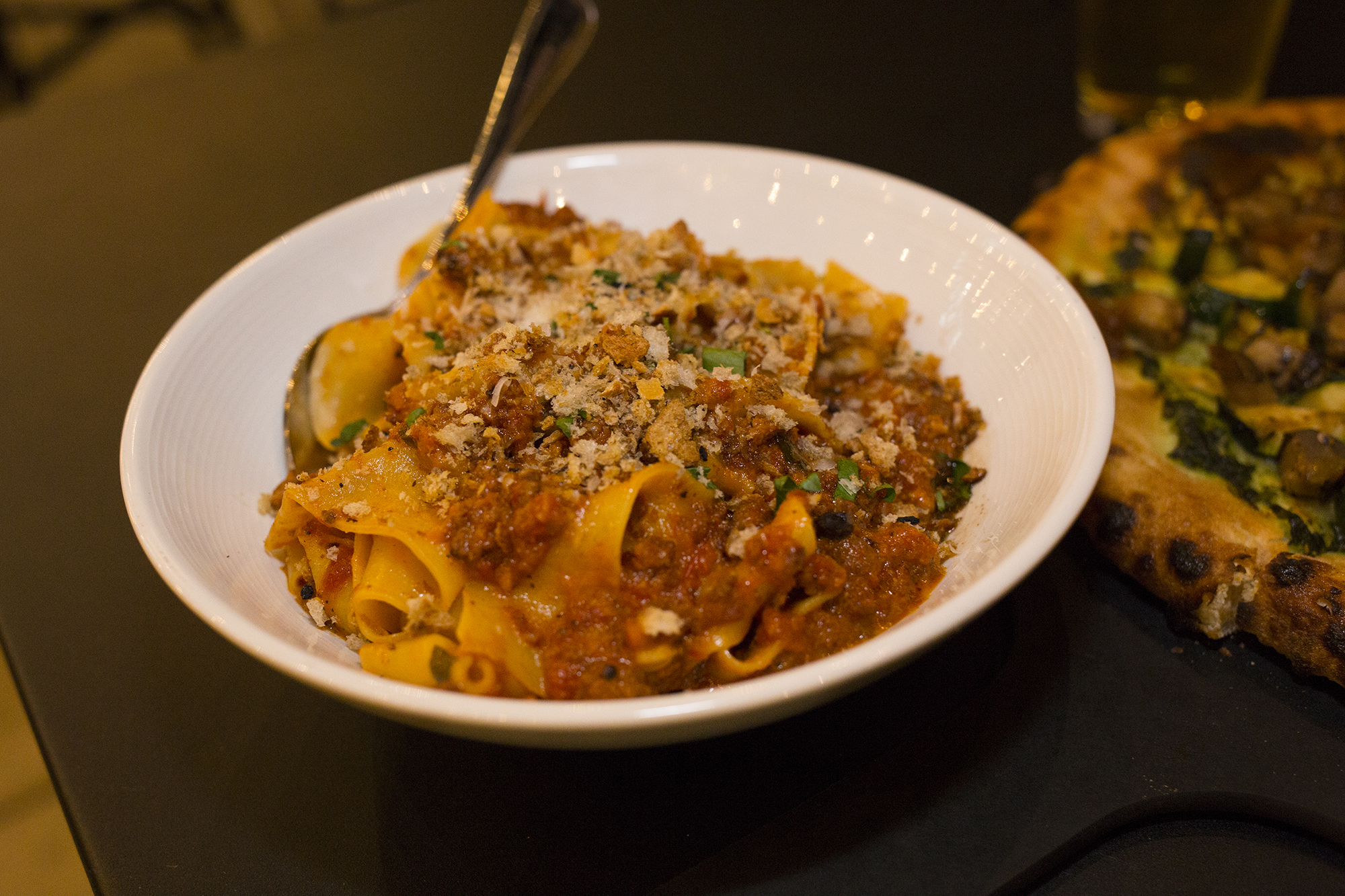 The menu goes far beyond pizza; in fact, the first few weeks have offered more options under sandwiches and entrées than pies as the chefs work on new creative pizza ideas with the ingredients available.

“I wanted it to feel very comfortable for friends and family—sandwiches in the morning, or brunch, and entrées and pizza in the evening,” Arbabian says. “Pizza and video games. It’s a throwback to my childhood.”

From the entrées, our table ordered the pappardelle bolognese, easily shareable and packable, which did have a more traditional flavor profile than some other options on the menu, like curry chicken.

The only thing missing right now is a few more pies; Arbabian hopes to have at least eight—a few staples and several seasonal rotations, and a gluten-free crust. 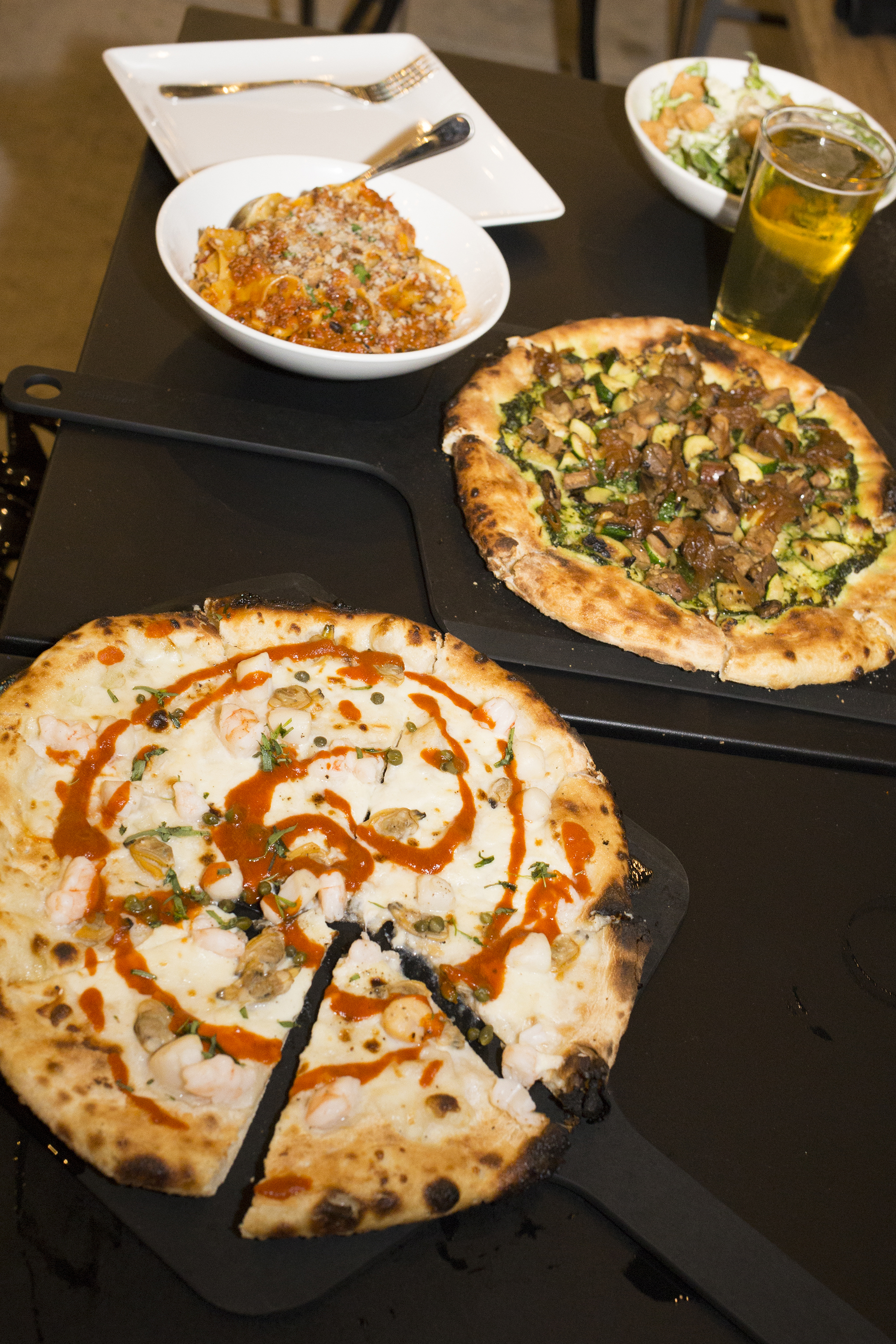 Tatterson talked about the importance of having the vegan artisan pesto pizza on the menu, which our table found delicious, but hopes La Crosta chefs can take a crack at a gluten-free crust soon.

The seafood pizza is especially fun to try for those who love shellfish. Chunks of scallops, clams and rockfish with white sauce create a comfort food that is elegant, savory and hard to quit.

Arbabian says the globally inspired menu comes from her own background, growing up Persian-American and traveling the world.

“It is a reflection of myself. I just really love food, I love the world, and I think when you think of people, you should transcend borders and concepts,” she says. “We want to emulate that with the foods from Sacramento and West Sacramento, fresh and made from scratch. The menu is driven by the ingredients that are available.” 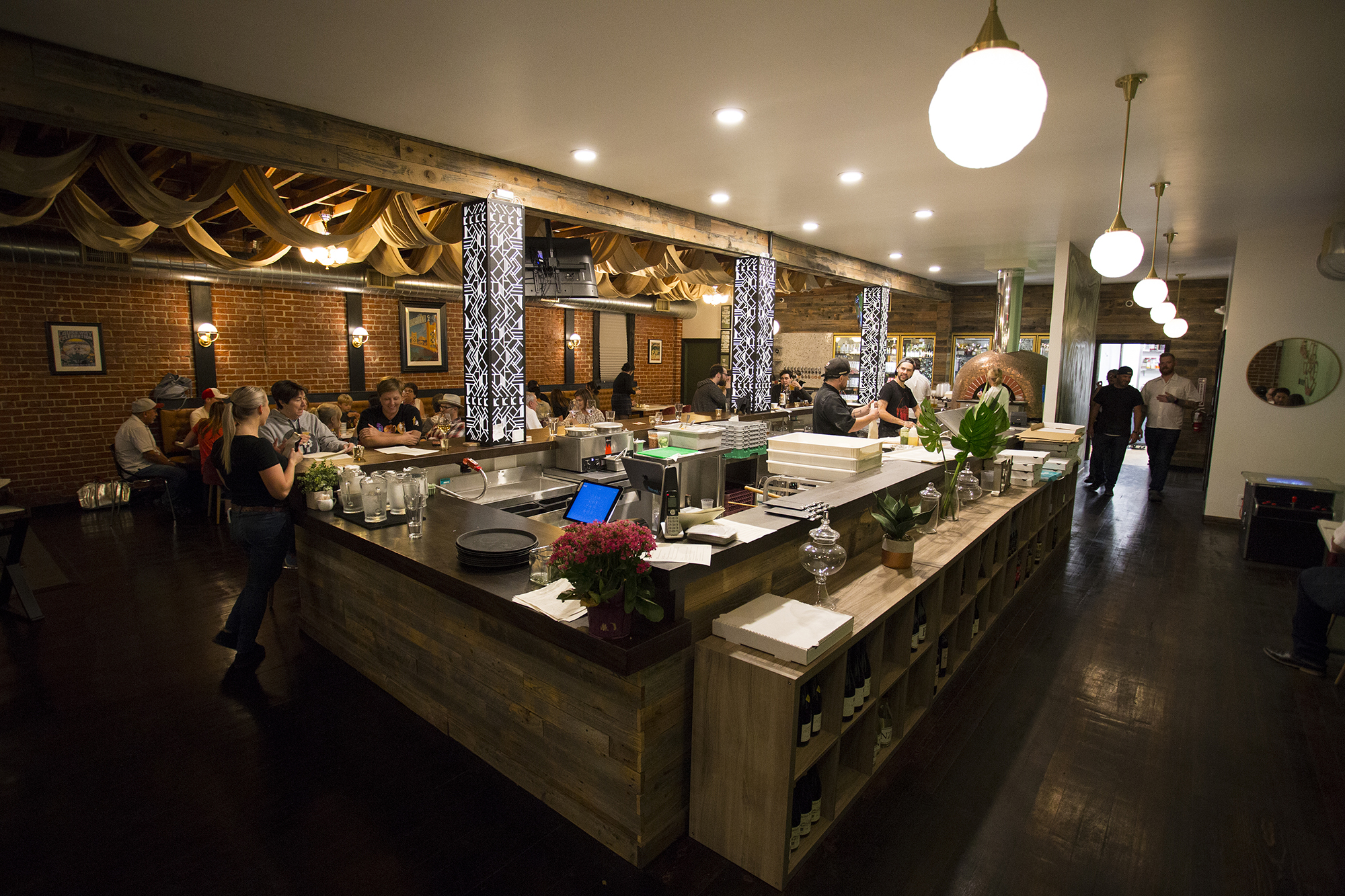 Arbabian says that’s what she loves about this region—the restaurants and chefs meet the food interests and dietary needs in a caring, meaningful way for all people.

“The food should exist simply because it does, and it should be great,” she says. “If we’re to ask for more from our region, it should be for more conscientiousness of where we get our food, and specifically for humanely raised meat. But today, it is still more expensive, and clientele are then deprived because of cost. We need to change that. It tastes good, it’s better for you, and it’s better for the world.”

As for what’s next, Arbabian says La Crosta still needs to work out a full menu, including more desserts and pizzas. She notes that locals are now coming in three days a week, and she wants to make sure the menu is constantly evolving.

The couple doesn’t see it slowing down anytime soon. The neighborhood, zoned mixed-use commercial and a quick walk or bike ride from Raley Field, is planned for dense development and more waterfront attractions, making their location prime for increased traffic.

Arbabian hopes La Crosta continues to “roll with the punches” as rapid change occurs around them, and she continues to think of ways to involve and engage the community until then, saying, “At the heart of every human is the need to connect, and we connect through our food.” 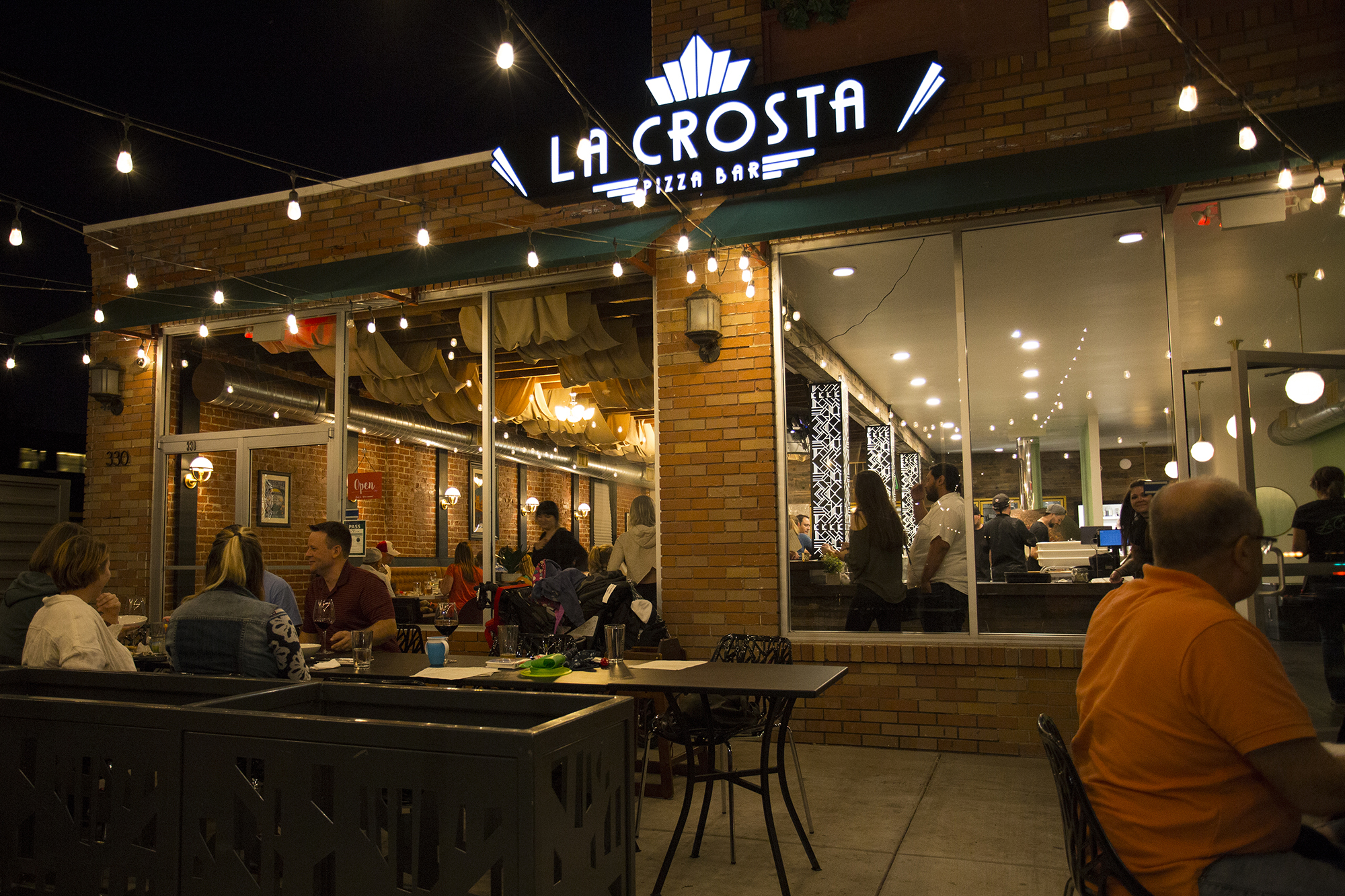