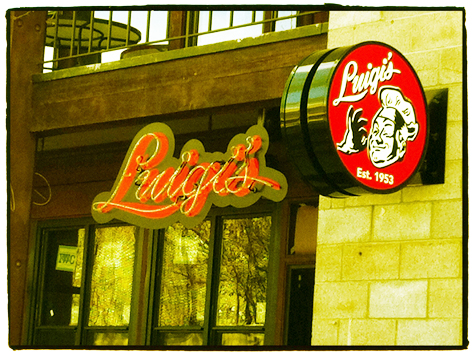 If you attended last Saturday night’s show at Luigi’s in Davis as part of Davis Music Fest, you would have never known you were witnessing the final show the venue would host. The very next day, Luigi’s quietly closed its doors for good. “It just didn’t resonate and never got better,” owner Linda Brida told Submerge of the all-ages venue and pizza joint, going on to say that Davis “is an interesting animal.” They wanted to tough it out to the one-year mark (they opened on January 21 of this year), but it just didn’t make sense financially to keep it going any longer. As of press time there was no indication as to what business would fill the location.

The closing of Luigi’s in Davis leaves the small college town with very few legit (i.e.: not house shows) all-ages venues for both touring and local bands to play. One remaining example is the ever-popular, long standing Sophia’s Thai Kitchen, which hosts all-ages shows on their patio during fair weather months.

“Unlike Sophia’s, Luigi’s didn’t have a clientele that treated the place like a local,” said musician Lauren Cole Norton, who plays in The Souterrain.

“If there was going to be anyone in the audience, they were going to be people you had invited out,” she said, as opposed to a built-in crowd that comes out no matter who is playing. Her band had played Luigi’s during the venue’s opening weekend and she remembers that the “place was hopping.” But, she added, “You could see already how it was going to be tricky to get people to pay to come down to the basement when they could hang out upstairs at the bar and listen for free.”

“We thought that was what Davis wanted,” Brida said. “It was not their cup of tea. It just didn’t take off.” She pointed out how hard it was to close the location knowing that their 15 employees would be out of work.

Luigi’s two Sacramento locations, 3800 Stockton Boulevard and 1050 20th Street in Midtown (which also holds all-ages shows) will both stay open. The Midtown location is scheduled to be remodeled later this year, something that Brida says they’ve been planning for a long time. It will include a kitchen expansion and a cleaning up of the “Fungarden,” the room adjacent to the eatery where countless touring and local bands have had the pleasure of performing.

Wear and tear or not, there are some killer bands playing at the Fungarden throughout the month of July, so keep an eye out on our calendar section, pick a show, grab some friends and enjoy some live music for cheap (cover is typically around $5). And while you’re at it, grab a slice and a beer. You know how the saying goes, Sacramento, you never know what you’ve got ‘til it’s gone.