Taste the Mountains in Midtown • The Cabin Offers All the Comforts of a Tahoe Bar, Without All That Driving 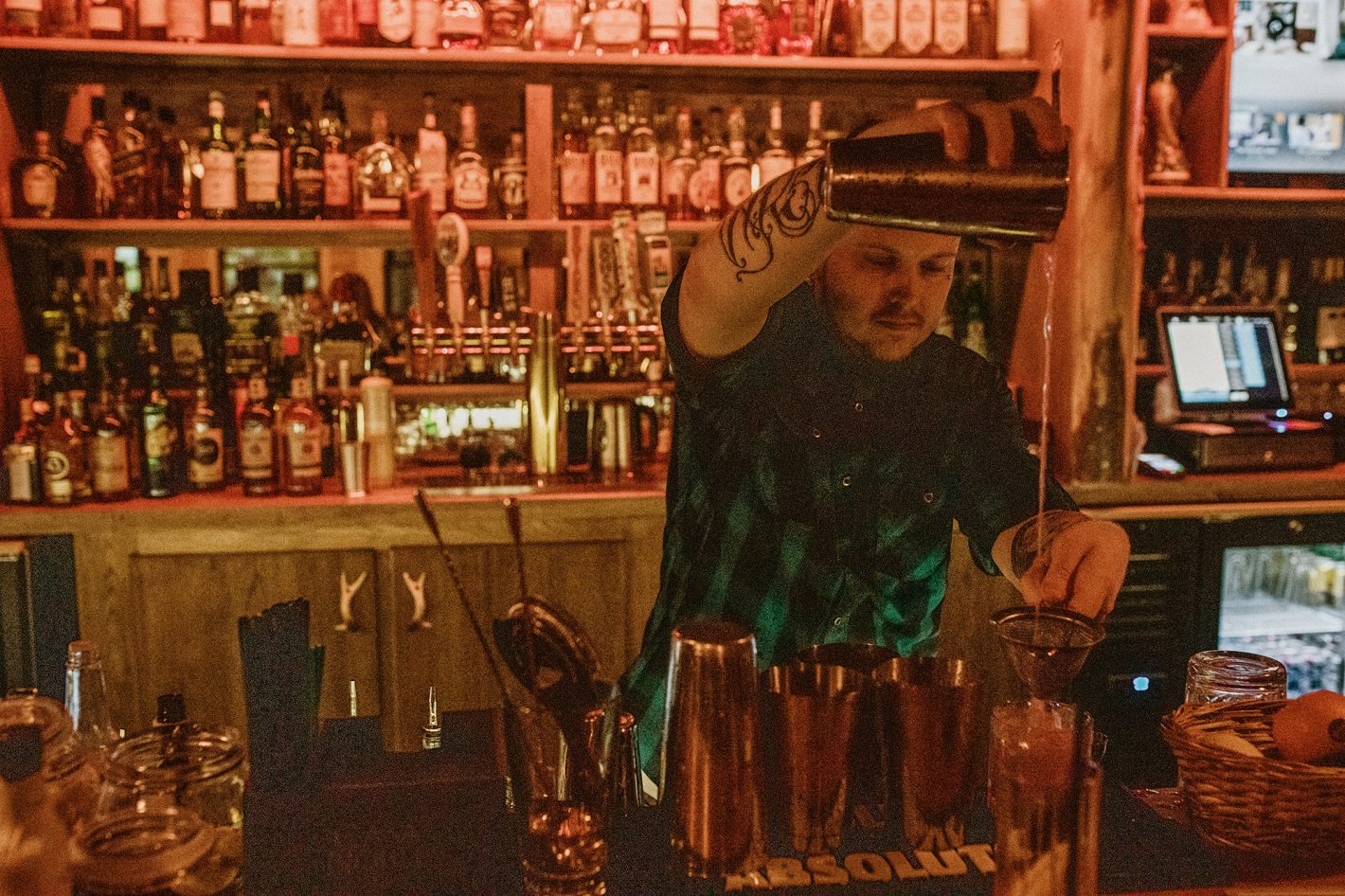 One of Sacramento’s newest bars, The Cabin is a mega cozy, rustic getaway smack in the middle of Midtown. The space is the love child of Eric Rushing and Bret Bair, the same pair who own several other local digs, including Goldfield Trading Post and Holy Diver, to name a few. The Cabin has taken over the long vacant former spot of Bonehead Tattoo on 21st Street, a cute standalone shack discreetly nestled between a key shop and an apartment building.

A lot of the inspiration for their newest venture comes from Rushing. He has always loved Tahoe, even dedicating a week there every year for his birthday. The concept also comes from a couple of bars he had visited and loved in other cities. He felt that a bar with a cabin, outdoorsy feel would do well in Sacramento.

When you enter The Cabin, you are greeted by the smell of fresh cut lumber and a massive bear carving. A sign similar to one that you would see while entering a national park says, “Welcome to Sacramento.” It is dimly lit by faux candles and the flicker of a digital fireplace. Taxidermy and vintage housewares line the walls and a stuffed raccoon watches from the corner of the bar. 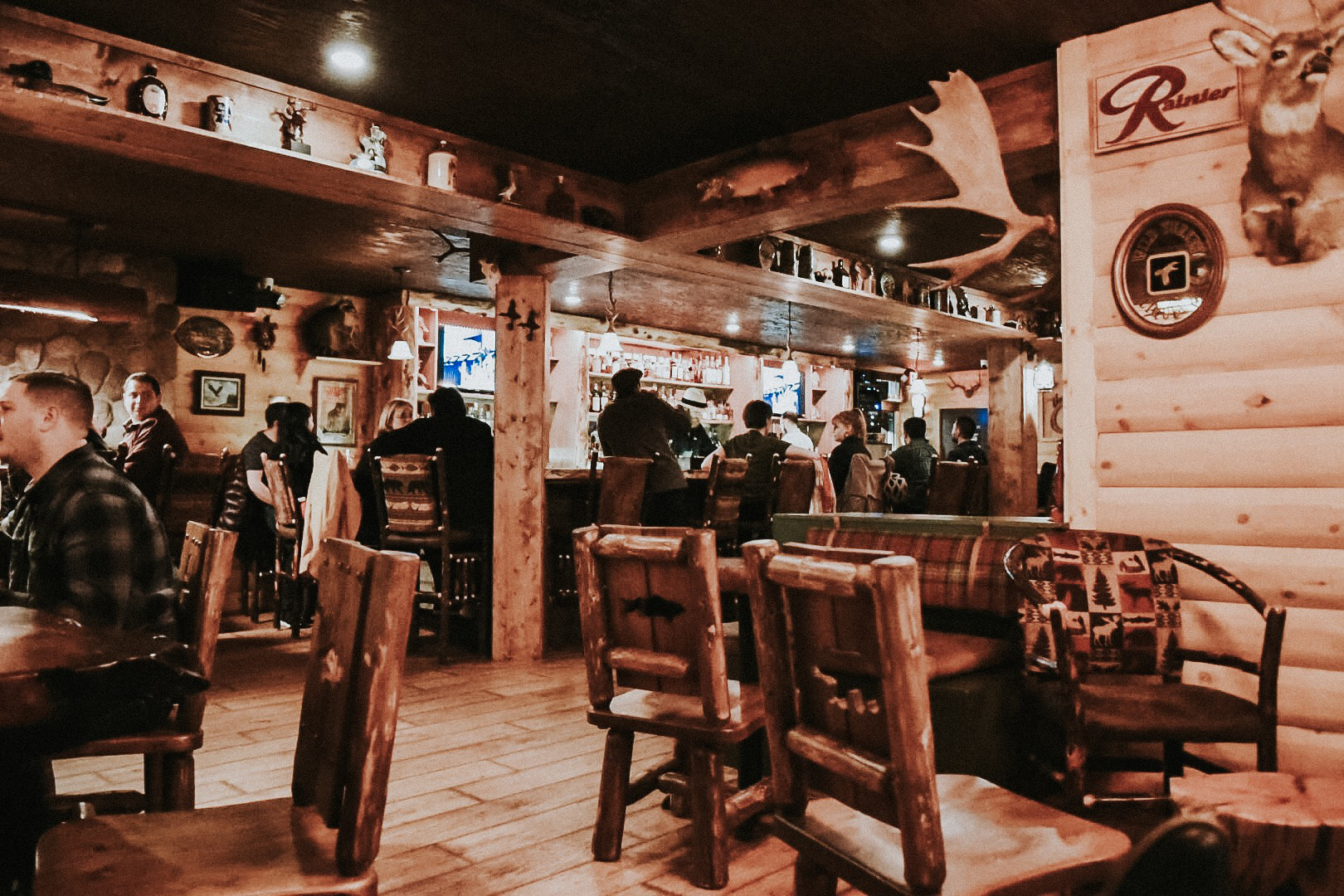 Nature murals painted by local artist John Horton also line the walls. Horton is known for his wild color palettes and balance of crisp realism and traditional painting techniques. Some of his most notable work is his contribution to Wide Open Walls with his glitchy, bright murals. At The Cabin, Horton gives the woods an airbrushed, vintage vibe.

The Cabin is supposed to provide a form of escapism—a respite.

“We wanted to create a warm and cozy bar that feels like you are actually stepping into a cabin in Tahoe,” says Eric Rushing.

The decor came from all over. Rushing spent the last year collecting and searching for stuff at antique stores and fairs and purchasing pieces off of Ebay. Some of the taxidermy was donated by family.

As far as how the cozy, warm bar will transition into the warmer months, the owners say they are installing open air windows before spring that will give the bar a great vibe when the temperatures start to climb. 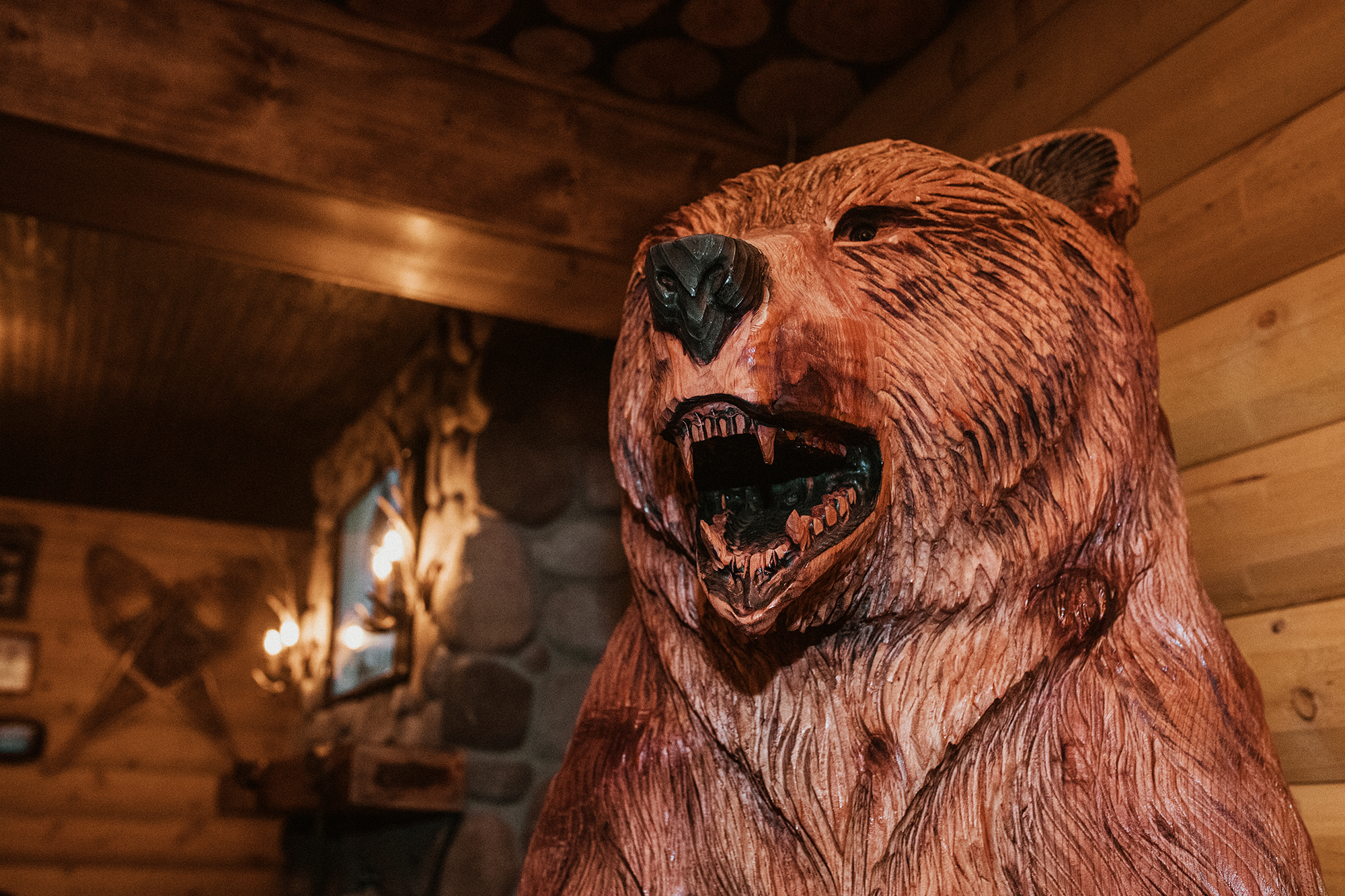 Different components of the bar were built by craftsmen all over the country, all by hand. The fireplace is comprised of river rocks and an everlasting flame. All of the barstools and chairs were sourced and built by an Amish mill in Pennsylvania. The tables and bar top were sourced from Artisan Burlwood, and the back bar was built by Tim Arthur, a master craftsman out of El Dorado Hills. There are still many more things on the way, and they are going to continue to add on to their collection to display in the bar. The bar was designed with the help of Whitney Johnson of MTA Inspired Spaces, the people behind many of Sacramento’s interior bar concepts in the last few years including Shady Lady and Tiger.

Vintage episodes of the A-Team played on the televisions throughout the bar. The episode playing while I was there was especially good: Rick James was having an insane concert and Hulk Hogan would pop out of nowhere and start hideously dancing. Simultaneously, they had the essential ‘80s playlist going on the speakers. Peter Gabriel’s “In Your Eyes” played as I drank my cocktail near the fireplace. For a moment, I felt like I was in one of those ‘80s ski movies. Coincidentally, they had a pair of vintage skis on display.

The Cabin’s house cocktails were actually quite simple for the most part. They stick to a few staple liquors and more earthy mixers—think cherry, wood, citrus and honey. Rushing says they “created a cocktail menu that will change with the seasons and has something for everyone.” The bar will also serve up eight, mostly local beers. 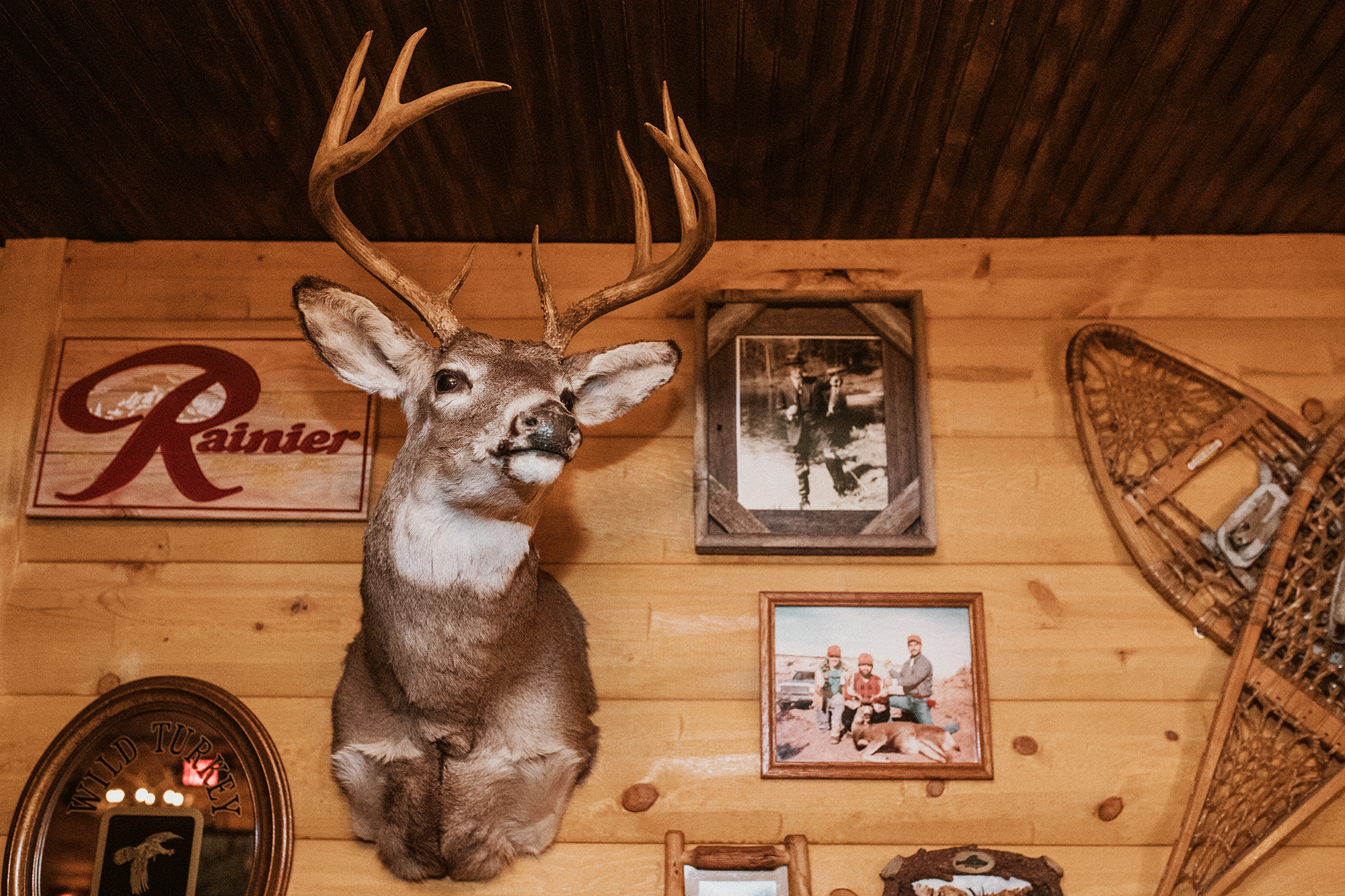 My personal favorite cocktail, and also the bartender’s favorite, was the Stabbin’ Cabin.

“This one is my baby,” said their super nice bartender while whipping up my drink.

This drink had bourbon, simple syrup, a little bit of citrus and cherry, a hefty splash of champagne and was absolutely perfect. It was lightly sweet and incredibly refreshing.

Cabin Fever was also a standout concoction; it intertwined Johnny Walker scotch with Red Ruby Port and coffee liqueur. This drink went so well with the woodsy, cozy feel of the bar. The coffee liqueur and bourbon were meant for each other.

The most captivating drink was the Gimme S’More, a mix of Smirnoff vanilla vodka, creme de cacao, chocolate, cream and graham cracker. I have not touched vodka since my 21st birthday a couple trips around the sun ago, but for the sake of research, I put my big girl drinking face on and ordered it. The bartender set my drink in front of me with one hand and pulled a lightweight blowtorch from behind him with the other hand. He placed a fat marshmallow skewed on a wooden stick atop my cocktail glass and lit it on fire. I watched that marshmallow char for a good moment and then blew it out when I felt it had enough. The drink was shamefully good—talk about a mingling of childhood nostalgia and adult comfort. 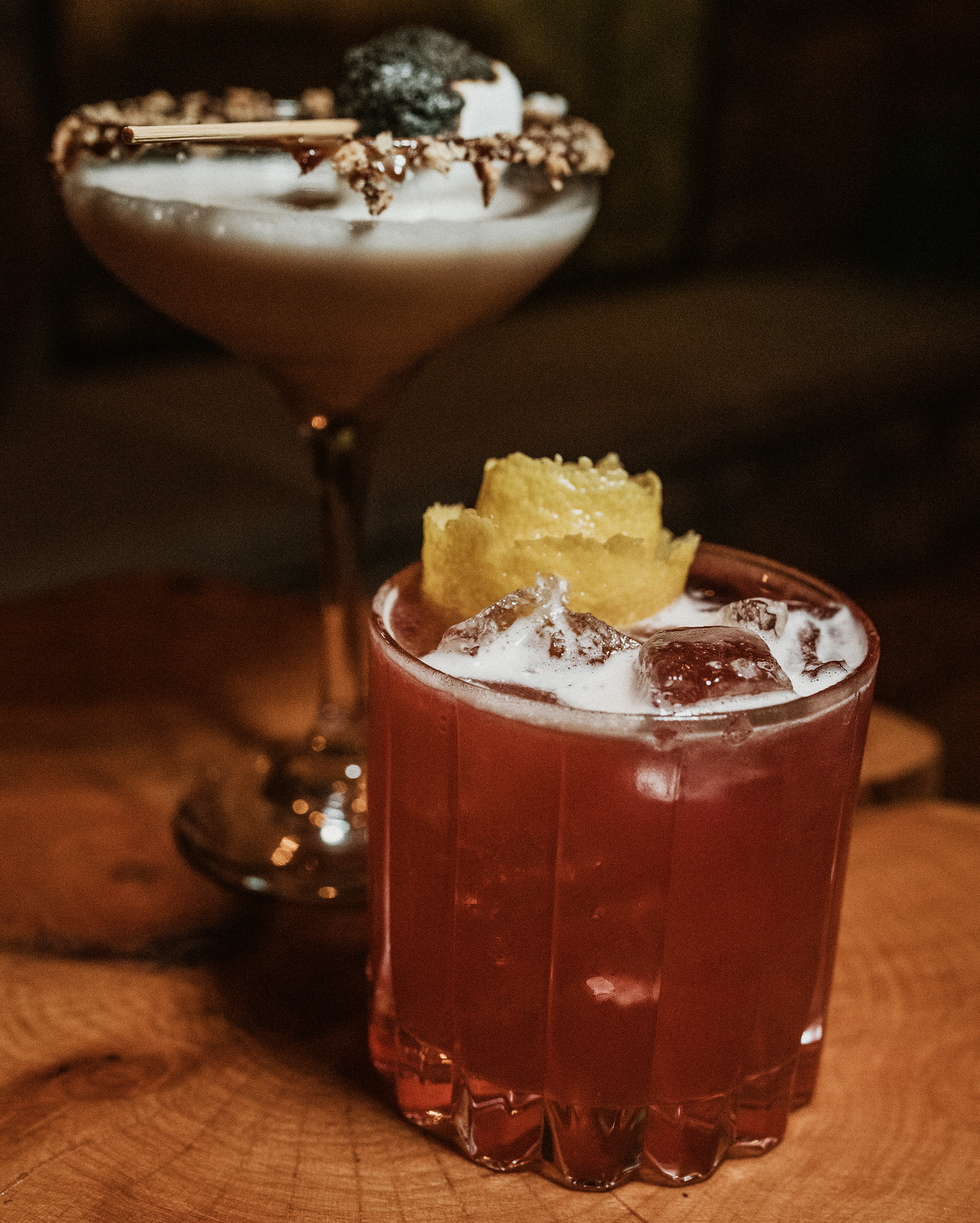 Currently, the bar does not serve food beyond a few different varieties of snack mix and locally made beef jerky. If jerky is your thing, they have at least five different types.

Much like neighboring bar, The Jungle Bird, The Cabin offers a really fun, momentary staycation to its patrons. They take their personal passions and interest and put it on display for others to enjoy as well. It’s somewhere you can go to be in an environment that’s quirky, completely out of the ordinary and perfectly over the top. This is the perfect place to get cozy and relax in the chilly months, but I also imagine it will be a great escape in the summer when you are daydreaming about the respite of a cabin in Tahoe on a snowy day. 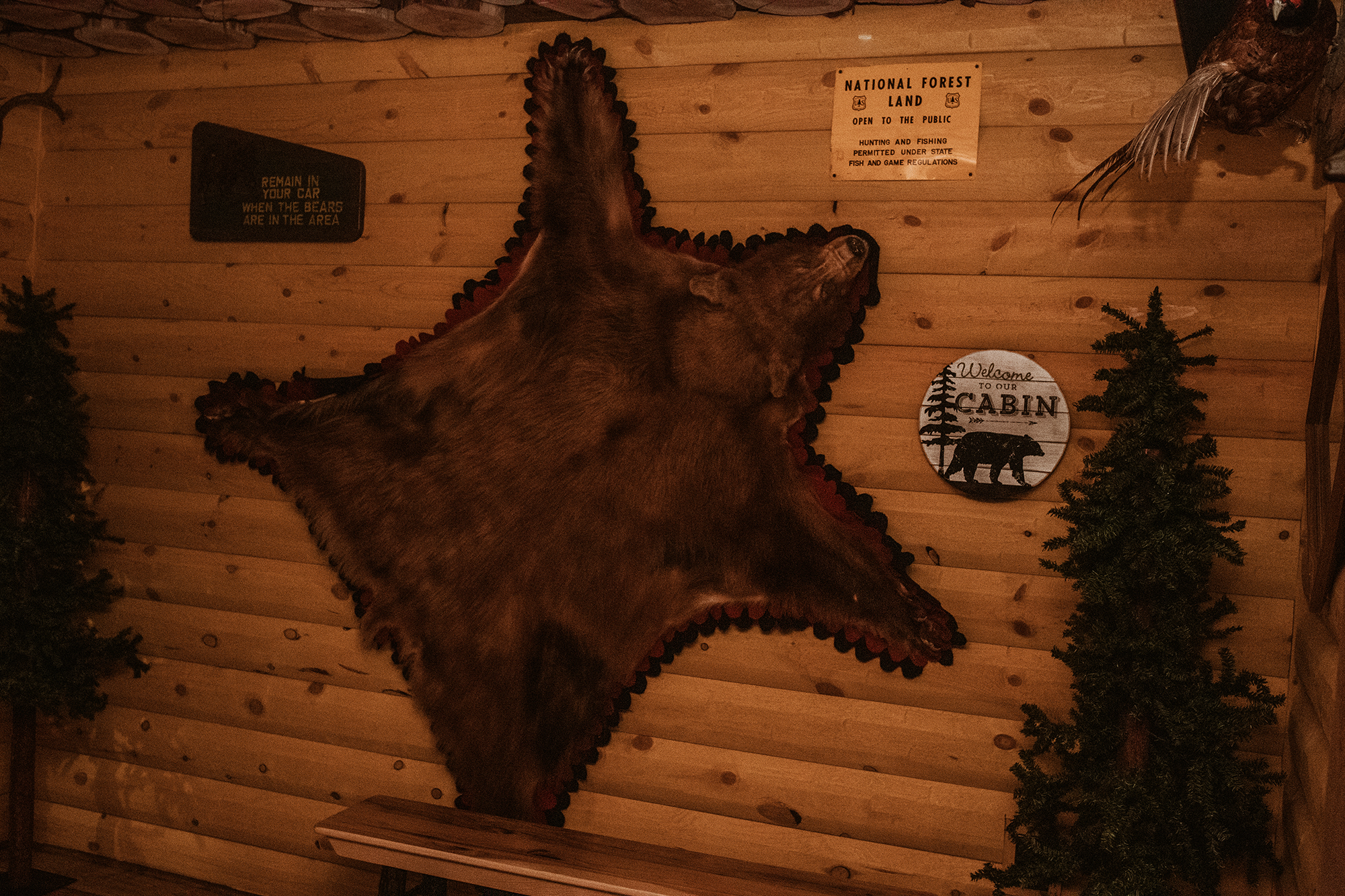 The Cabin is located at 1207 21st St., Sacramento. For more info, go to Facebook.com/thecabinsac.