Shake It Up • Forget Online Dating, Put on Your Dancing Shoes This Valentine’s Day 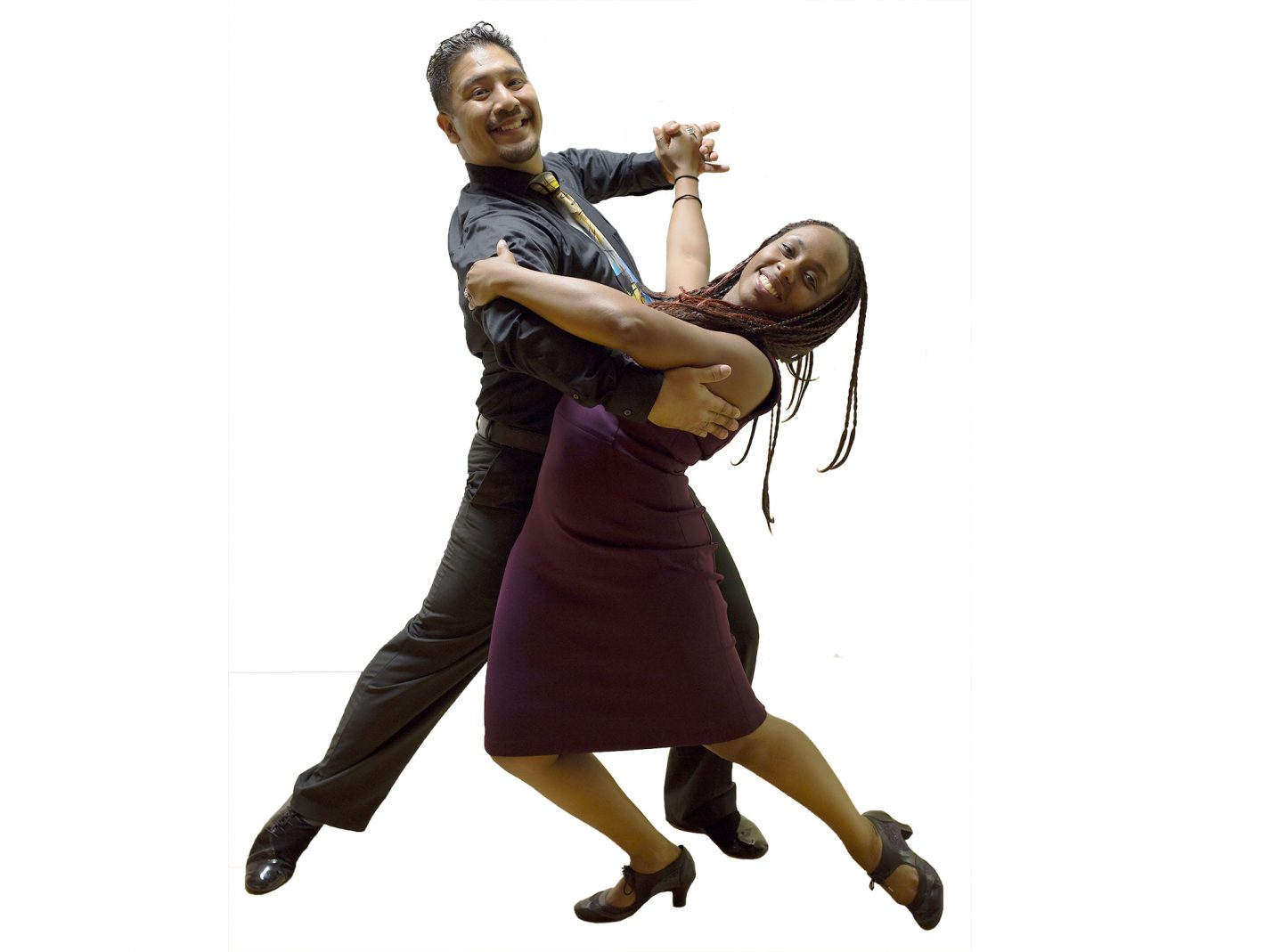 Ah, Valentine’s Day. The day when we act a little more mushy-gushy toward our significant others, spouses or anyone on the receiving end of one of those little cardboard cutout valentines with candy attached (I’m convinced you’re never too old to give these to everyone around you). The tradition may be to purchase the chocolate, the flowers, the fancy dinner, yada yada, little black dress this, Nordstrom bowtie that. Boring. On the flipside, you’re the person who is single, makes sure the world knows how much you hate Valentine’s Day (or “Singles Awareness Day”) and you just want to chill with your dog/cat and watch reruns of The Golden Girls (no judgment; I’ve been that person).

But I’m proposing all the couples, all the singles and everyone in between, step outside of their comfort zones this year … and into a dance class.

Jamila and Pedro Buada, owners of the Arthur Murray dance studio in Carmichael, say that the secret to love may be on the dance floor. The couple has been married for more than a decade and have what you might call a “meet cute” story, all because of their love of dance … and for wanting to meet people.

Pedro has always loved music, and was the manager at a Virgin Megastore in Southern California.

“I was a single guy in my mid-twenties,” he says, admitting his love of dance began as a desire to meet women. “I figured dancing was a way to create that opportunity.”

But as soon as he walked into the door of the Arthur Murray studio in Anaheim, he lost his courage.

“I waited 10 seconds and went back to my car and drove home,” he says.

“I freaked out! But I went back a week later and it changed my life completely.”

After being transferred to Sacramento to manage the Virgin Megastore (R.I.P.), Pedro continued dancing at the Arthur Murray studio in Carmichael, where he eventually became an instructor. He met Jamila in 2005, when she began working as a fellow instructor at Arthur Murray, but she was a busy woman.

“I had my degree in dance and choreography, and I came to Sacramento to be with family—but I really wanted a job in dance,” she says. “I was working at three different studios at first!”

Was it love at first sight between Jamila and Pedro? Not exactly.

Like any rom-com worth its weight in chocolate and wine, Jamila and Pedro were just friends at first. They’d go out salsa dancing and hung out all the time, but just as friends. After about a year, they began noticing how much they enjoyed each other’s company, and they’d spend hours chatting in the parking lot long after dance classes were over. They began “officially” dating in 2006 and then became engaged and married in 2007.

Fast forward to 2013, Jamila was pregnant with their third daughter, and the opportunity presented itself for the dancing duo to take over the Arthur Murray franchise in Carmichael. They jumped at the chance to start this new chapter in their lives, because the studio was more than just a place to dance, it was also filled with their students, who were like their own family.

Jamila and Pedro share more than just a passion for dance; they also share a passion for helping other people find their best selves and partners through dance. In the last half decade, they’ve watched single people find the loves of their lives, engaged couples learn their first dance and widows dance for their first time since losing their spouses.

At Arthur Murray, everyone is welcome, from kids through infinity (the Buadas now have four girls, and three of them are already killing it in dance classes). Pedro compares the studio to Disneyland, but for social dancing. He says there’s an equal mixture of single people and couples. Whether you’ve always wanted to learn how to salsa, tango, waltz or even hustle (plus, like a million other dances; I didn’t realize there were so many), this is the place to do it in a low-key, no-stress way. The studio teaches with a tried-and-true syllabus that introduces dancing through everyday movements, such as walking and side step. And Jamila promises that everyone is so focused on their own feet, no one will even notice you if you stumble (I would do this at least 500 times).

I use myself as an example when I ask Pedro and Jamila if it’s even a good place to try if I was the unfortunate owner of two left feet.

“Bring them both!” Pedro laughs and says this is how he began his dancing career. “I told them I had five left feet. The instructor said, ‘You only have two, let’s get started!’” Pedro says he’s a product of the system. “I’m what you’d call coordination-challenged. If I can do it, anyone can!”

While researching the origins of the Arthur Murray dance studio franchise (because I’m nerdy like that, sue me), I learned that Arthur Murray met the love of his life, Kathryn, in a New Jersey radio station in the 1920s, while he was doing a radio broadcast dance lesson. Kathryn was an audience member. The two fell in love, married in 1925, and opened a dance school together. The school that would later become a worldwide franchise, and the place where Cupid’s arrow dances as freely as the feet surrounding it.

Whether you’re curious about dancing as a side-hobby or a way to pick up babes like the rom-com of your dreams, now’s your chance. Arthur Murray will be hosting a special Guest Open House for Valentine’s Day at 7:45 p.m., when you can bring your significant other, or just yourself, and get ready to learn some sweet moves that might spark a love of dancing, or just help you look better next time you’re cutting a rug at Faces or Lipstick at Old Ironsides.

Sign up online (Dancecarmichael.com) or give them a call (they’re really nice) at (916) 971-3550. Arthur Murray dance studio is located at 4141 Manzanita Ave., Suite 200 in Carmichael. But if you run into anyone from any John Hughes or Nora Ephron movies while you’re there, you give me a call.