Can you blame Napoleon Dynamite for being stoked on Pedro’s “sweet jumps?” Or help but revel in the inexplicable bike break-dancing scene in Quicksilver? Hell, even an alien got into the mix when E.T. escaped the clutches of a hoard of evil scientists and police officers while nestled in the basket of his fearless companion’s bicycle.

Bikes have often been cast as the quintessential “character actor” in film, but every year these two-wheeled vehicles assume the lead role in the Bicycle Film Festival, which rolls into Sacramento May 9 and 10 at Fremont Park. BFF was born out of the wreckage of avid bike rider Brendt Barbur’s horrific collision with a truck in New York in 2001. After a year hiatus, the former Sacramento resident and founding director of BFF decided to bring the festival back to the City of Trees because of the rousing support he received from its residents.

“I think that the Sacramento crowd is great,” Barbur said in a recent phone interview as the bike savant prepared for a flight to Italy. “Doing the screenings out in the park is amazing. I think [last time] we had a couple thousand people show up. So, it’s a good crowd—a very good crowd.”

So grab your popcorn to-go, and gear up for onscreen explorations of all things BMX-, fixie- and cruiser-centric. Here’s a look at a few of the films that will be a part of this year’s screening as well as a taste of the non-cinematic offerings at this pop-up movie theater in the park. 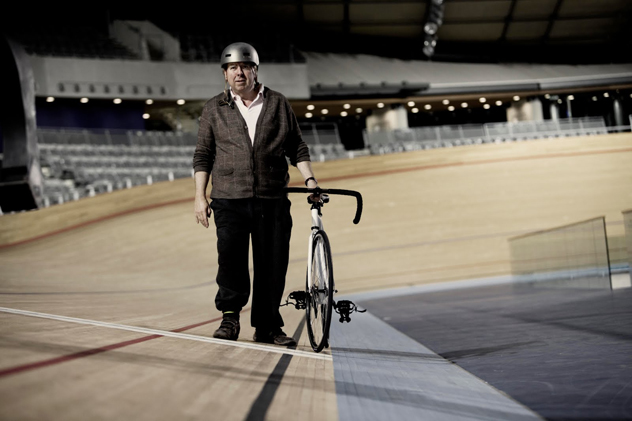 (2012)
A favorite of Barbur’s and screening on day one of the festival is a heartfelt story about a father coming to terms with the death of his son—an avid cyclist who died in a road accident while competing in a race. Justin Chadwick’s “Boy,” a 10-minute short bereft of dialogue, is an emotional powerhouse of a film that follows the grieving father, a carpenter by trade, as he hones a branch into a perfect plank of wood, which he lovingly installs into the velodrome track his son was to race on before his untimely death. The film weaves in and out of the present and the past as the man, through the process of transforming the branch—which he saws off of a tree near the spot where his son was fatally struck—is able to bury the ghost of his beloved son. Venerable British actor Timothy Spall, of Harry Potter fame, delivers an emotionally charged performance that is both haunting and beautiful. 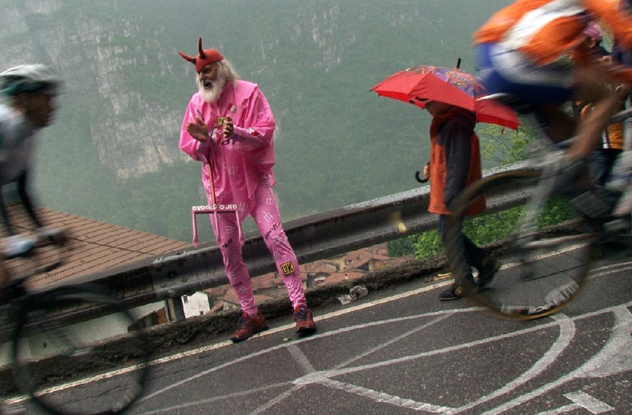 (2012)
Contrary to what you may have heard on the street, the devil wears pink, not Prada. The 7-minute film from Paolo Casalis—a cinematic extension of his full-length film, The Last Kilometer, is a glimpse into the personality of Dieter “Didi” Senft, or as he is better known in European cycling circles, “El Diablo.” The Italian-language short follows Senft, who is the exemplification of a cycling fanatic, clad in pink racing gear, sporting a crown of devil horns atop his head while yielding a trident in his hand, who cheers on the cyclists during the Giro d’Italia race—one of the premier cycling events in Europe that include the Tour de France and Vuelta a España. Cheering is a bit of an understatement, however, as Senft hollers at the cyclists while chasing after them, wildly waving his trident in the air. The film is a strange, yet entertaining, romp through the mind of a true cycling aficionado. 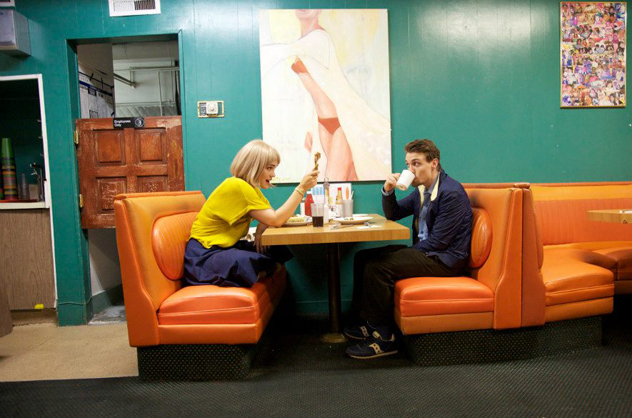 (2012)
Spall isn’t the only recognizable actor to bless the Sacramento incarnation of BFF with his cinematic contribution. Billed as the “love story that will send you spinning,” Morgan Krantz’s “The Cyclist,” based on a short story by Jessica Garrison. Shannyn Sossamon—yes, that Sossamon who left the band Warpaint to pursue a career as an actress—portrays Hannah, someone with whom most people who prefer to roll on two wheels in this town can identify: the victim of bike theft. However, this isn’t a story of intrigue, but rather a romantic comedy. The story is about Harry (played by Luke Baybak) and Hannah, who embark on the worst first date ever—trolling around for a bike thief.
So, the rom-com isn’t the most palatable of genres, granted, but what sets this film apart from the archetype, i.e. When Harry Met Sally, is that the hero is set up for an intriguing twist by the time the credits run down the screen. 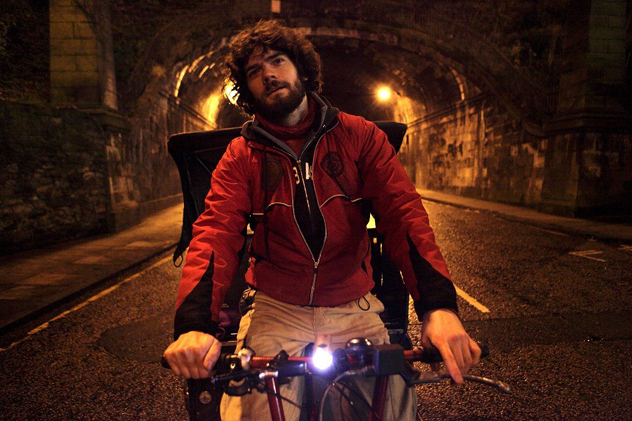 (2011)
Based on a true story, this award-winning, 20-minute exploration of the rickshaw business in Edinburgh, Scotland, depicts a driver who is driven by the need to make as much cash as he can before his ailing body gives out to the demands of his unrelenting profession. The beautifully shot short shows the protagonist hustling throughout the night, navigating drunks and other hazards of the road, culminating in his last fare of the evening, a gig that forces him to ascend the most grueling destination on three wheels—Edinburgh Castle. This filmic endeavor, written, produced and directed by Felipe Bustos Sierra, is not only an exploration of the hard life of the rickshaw driver but of the power of chance meetings. 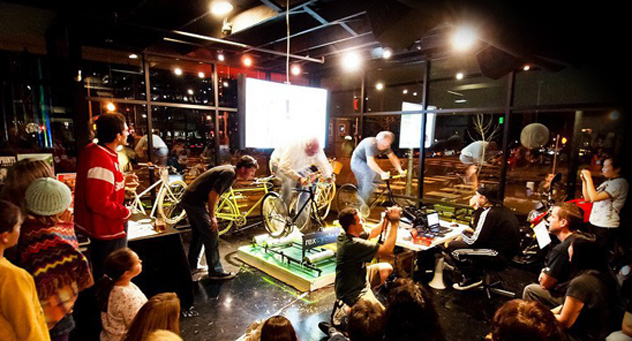 Friday, May 9
@ Hot Italian
Ready. Set. Go! This year marks the return of sprint races—an event that provides an outlet for cyclists to compete against one another to see who is the fastest bicyclist in the West. Ross Del Duca, owner of the VeloReviews, an online community that embraces cycling, health and fitness, was thrilled to bring this event back to the BFF lineup after the former organizer hung up his laces. “The Bicycle Film Festival is fantastic; it’s like the Sundance for bicycle films,” Del Duca raves. “I guess you could say I’m a sympathetic audience because cycling is a passion of mine. Anytime I have a chance to go and hang out with a bunch of other folks who enjoy cycling, well, that’s just a great day.” 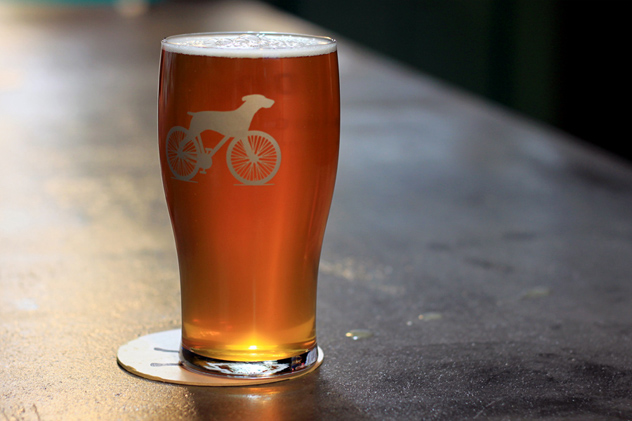 Saturday, May 10
@ Hot Italian
The crew over at Bike Dog Brewing Company is primed to take over the taps at Hot Italian during BFF—a real treat since the brew dogs typically only sell their sudsy offerings in their taproom. The co-founders of West Sacramento’s first brewery will be bringing a couple of their hop-heavy suds in celebration of some of their favorite things: beer, dogs and bikes. “For us, they really kind of speak to similar passions as ours, so we really want to be involved in supporting whatever they’re doing,” says AJ Tendick, one of the co-founders. “I’ve been a long-time supporter [of BFF]. To me, it [shows] some of the best of what Sacramento has to offer.” 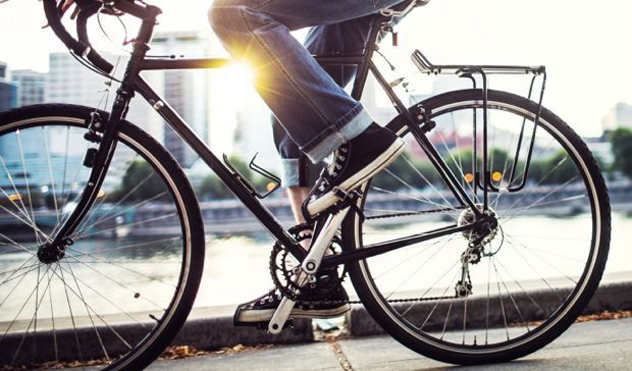 As the summer begins to descend upon Sacramento, so too do the myriad scavenger hunts. Sacramentans love their scavenger hunts. Now, bike lovers can join in on the fun when Nikolai Lokteff’s Ride and Seek Treasure Hunt rolls into town. While Lotkeff indicates that this is more of a cerebral side of the scavenger hunt model, the premise remains the same: teams of friends solve puzzles, riddles, word searches and crossword puzzles that lead the groups on an exploration of the various locales that make Sacramento great. “It’s not a typical scavenger hunt—you’re not hunting for soda bottles or other objects,” Lotkeff explains. “It’s not object-based but an info-based exercise. You’re solving a puzzle; a mystery.”

BFF rolls through Sacramento May 9 and 10 at Fremont Park. Check out Bicyclefilmfestival.com for a full list of films to be shown.