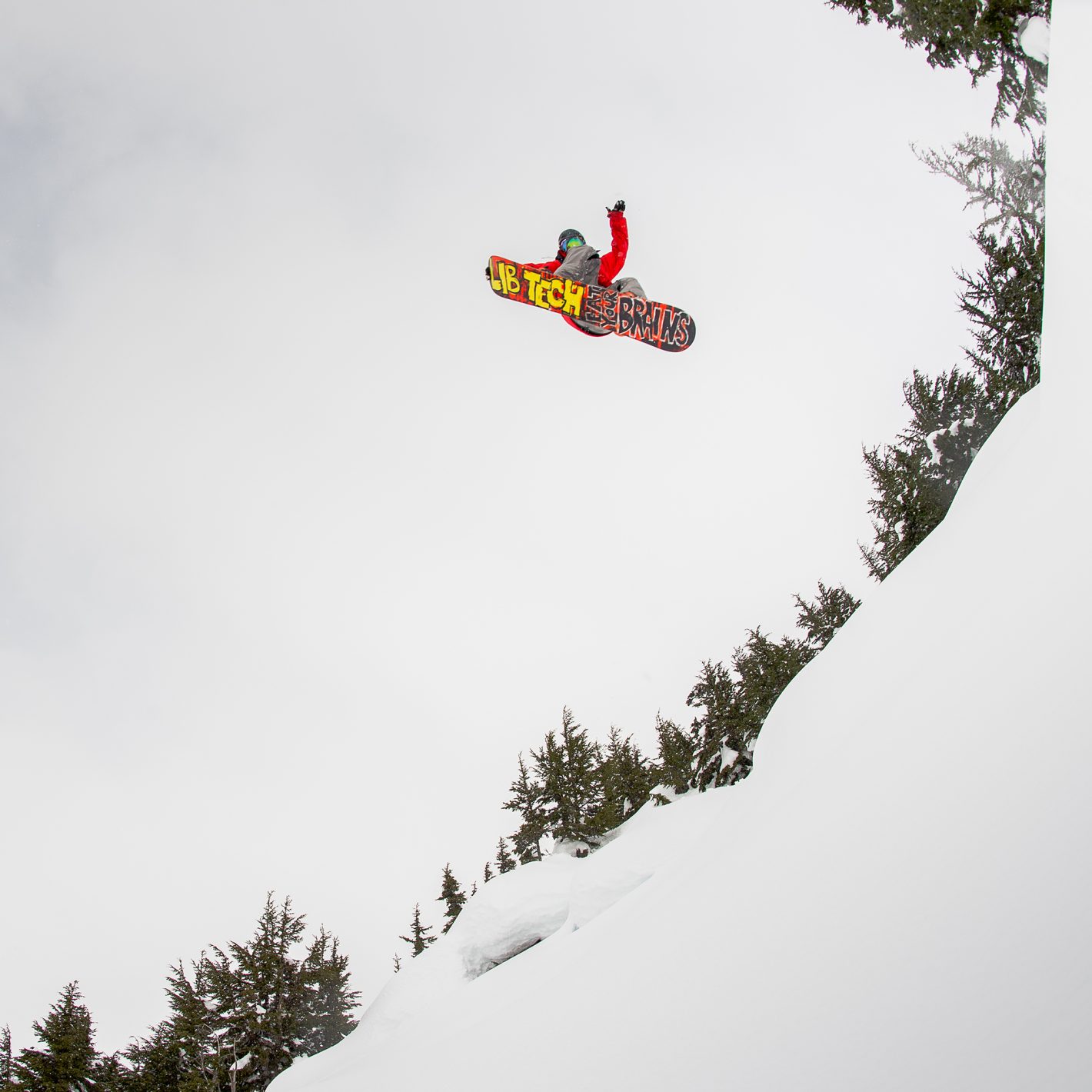 As a professional rider for Lib Tech Snowboards, creative genius at snowboard film production company Think Thank, and team manager for all Mervin Manufacturing brands, which includes Lib Tech, Gnu, Roxy Snowboards, Bent Metal Bindings and others, Jesse Burtner has managed to make a career out of his passion. At 34 years old, Burtner has dedicated his life to snowboarding ever since the moment he slid sideways down a snowy hill in 1989.

“I’ve been living and breathing snowboarding since I started,” Burtner recently told Submerge. “It’s just kind of developed into work, but it hardly ever feels like work. Basically I just keep getting opportunities to communicate the joy of snowboarding whether it be through a video part, or presenting an entire movie, or an article in a magazine, or helping steer the future of an amazing company like Mervin, it’s all just talking about what I already love and want to spend my time doing, snowboarding. Compared to sitting on the couch watching TV, it is hard work, but in the grand scheme of things it’s not work, it’s a gift.”

Speaking of gifts, Burtner’s film production company Think Thank has yet another one for shredders around the world. Their ninth film, Mind the Video Man, has been freshly released this summer (what a tease!) and is receiving rave reviews from those lucky enough to have seen it. A quick peek at the trailer on YouTube proves we’re in for a wild ride with powder slashes in the backcountry, insane urban rail spots, kickflips (yeah, on a snowboard), one-footers, a super rad back flip-to-5050-to-180 out, all sorts of crazy stuff. Think Thank is definitely pushing the envelope with this film, but not in an “Art of Flight, we had a million dollars to make a snowboard super movie,” sort of way. It’s more of a “my friends and I like to snowboard, party, have fun and film crazy shit and we’re really good at it,” kind of thing.

In celebration of Ground Zero Boardshop’s annual snowboard movie premiere party on Friday, Oct. 19, 2012 at Ace of Spades, where Mind the Video Man will air, Submerge caught up with Burtner to chat about the film, how his process changes from year to year and what it feels like to be inspiring snowboarders around the globe. 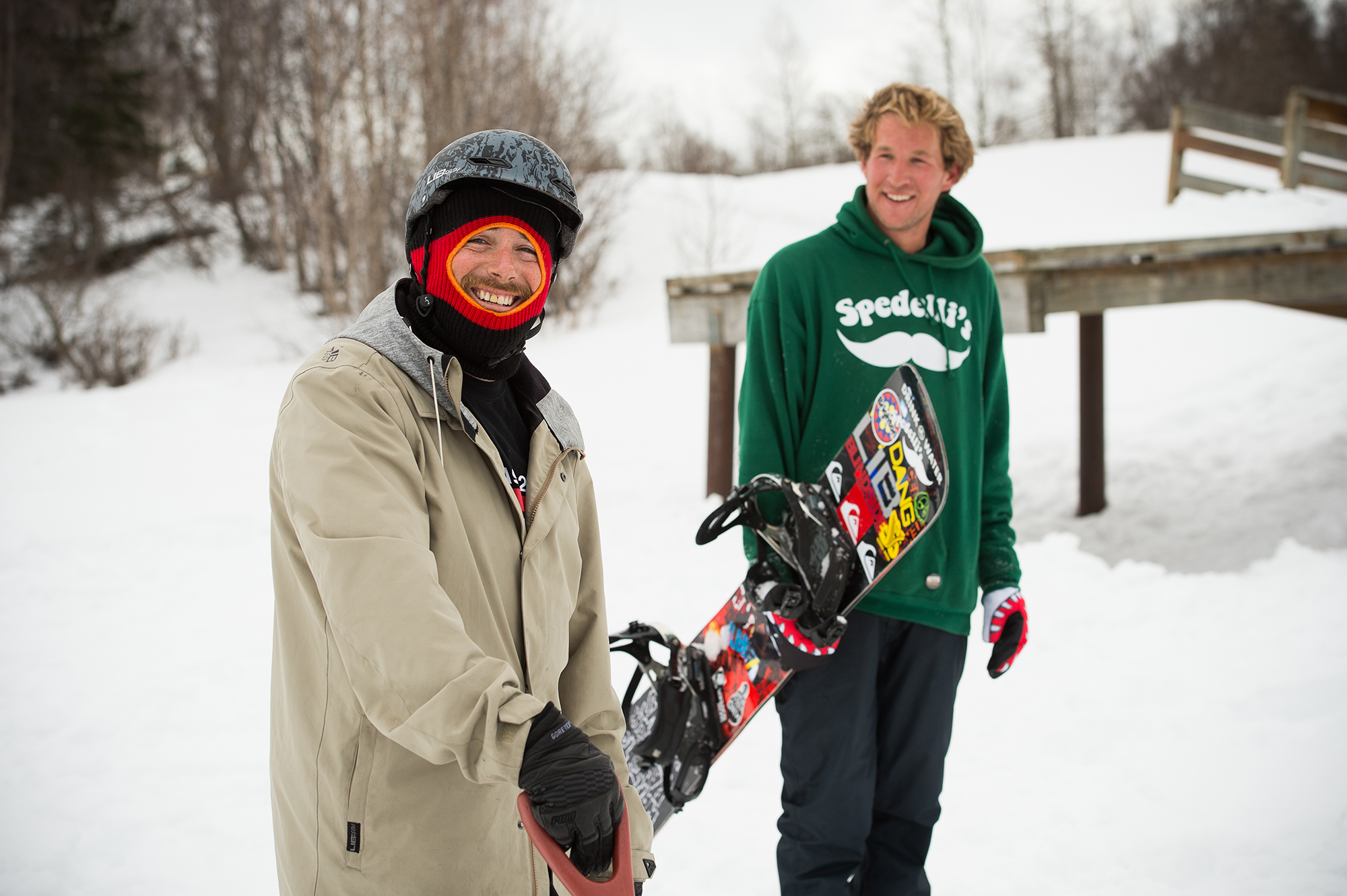 Congrats on the release of Think Thank’s ninth film! How does it feel to be unleashing it into the world?
Thanks! It’s been really good. You never know how it’s all going to go down, but this year has been exciting, a lot of good things happening with the movie and the riders in it. It’s really fun showcasing all these new guys shoulder to shoulder with some Think Thank veterans like Scott Stevens and Chris Beresford.

You’ve been riding in and making shred videos for many years now. How does your process and your mindset change from year to year and from film to film?
The way we keep it fresh is by giving each movie its own mission statement, with a sort of overarching philosophical theme. It means we get to use our best snowboarding of the season to tell a little deeper of a story or message and that makes it interesting year to year. Sometimes they are sort of abstract themes and sometimes they are more self-inspection. [Mind the Video Man] is looking at the state of the snowboard video in general, kind of celebrating the institution of the snowboard video and how important it is to snowboard culture and all of our lives as snowboarders.

What were some standout moments for you when filming for this video?
Both trips to Japan were amazing. Especially Holy Bowly–it was so much fun riding that snow bowl with some of the most epic people in snowboarding. Also our second trip to Alaska in the spring, Stevens, Beresford, Pika [Christina Burtner], [Mike] Yoshida and myself. Just such a good crew, great snow, it was like a vacation, but we were getting stuff done too.

It’s been a couple months since the movie’s world premiere at High Cascade Snowboard Camp. What has the feedback been like from those that have seen it?
It’s been super good! It’s been really fun showing video parts from all the new guys like Jaeger Bailey, Brandon Hammid, Brandon Reis, Nial Romanek and Curtis Woodman. A whole new batch of riders shown in our distinct Think Thank style.

It seems like there are more snowboard films and more companies making them every year, and budgets are getting bigger and bigger for some of those films. Does all of this weigh on you and your crew when filming year in and year out? How do you try and make your movies stand out in all of the noise?
There is for sure a lot of noise. So much stuff on the Internet, everyone has a Web series. That’s cool, they get their day in the sun. And I do mean their “day,” because that’s about all the hype something can generate when it lives for free on the Internet. We try and stand out by staying insulated in our own group working on our project, trying to obtain our objectives and not constantly reference what we do back to what others are doing. It’s a combination of staying in our little Think Thank bubble unaffected by snowboarding’s trends or industry pressure while still knowing what’s going on on a grass roots level, what’s exciting, what’s next, what’s new, that’s where we want to live. 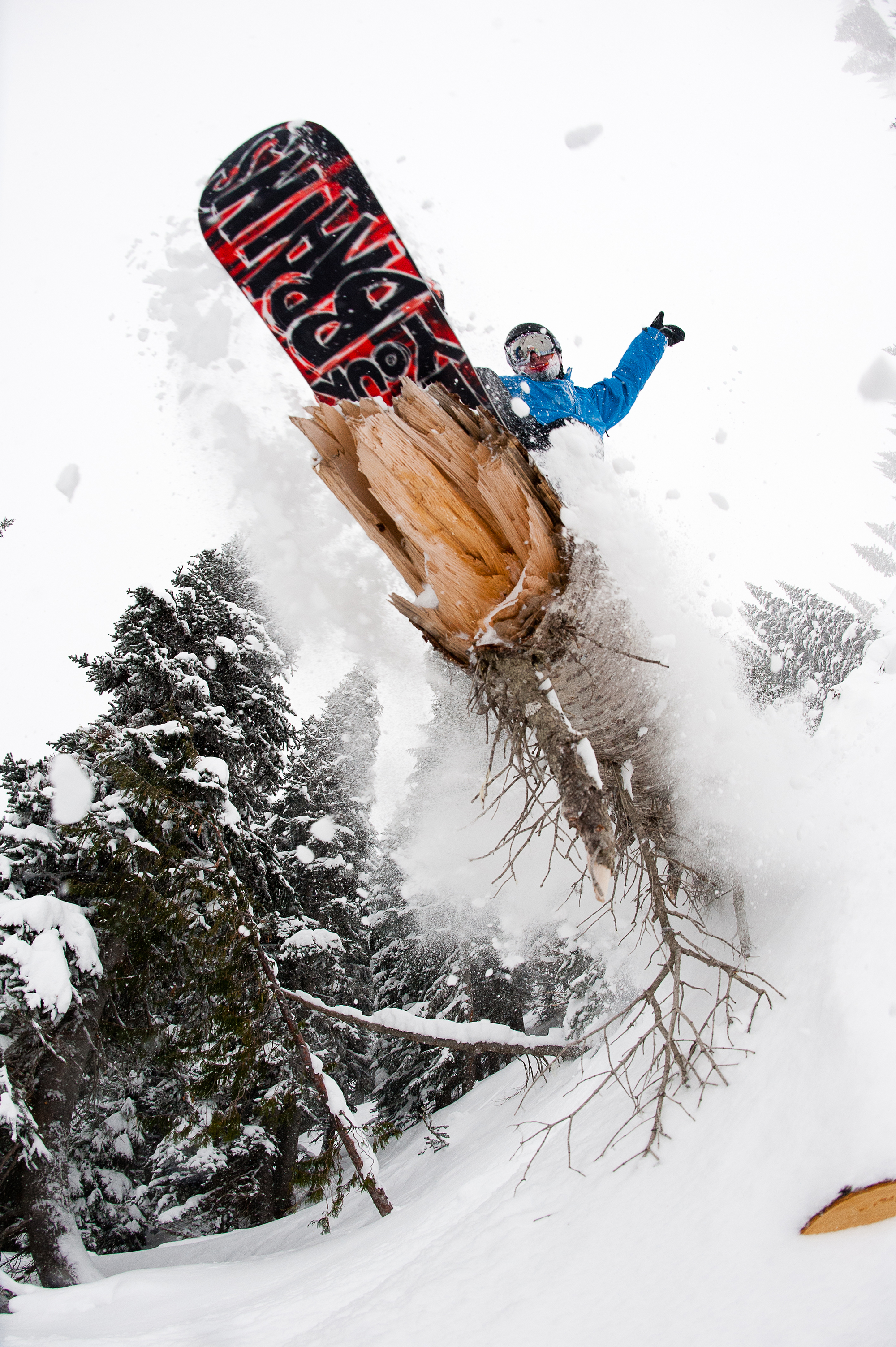 Does it trip you out to think that countless snowboarders out there turn to your videos to get hyped before they go ride? Or that these films could be inspiring the next generation of rippers?
It’s the best thing about what we do, is when you realize some people are paying attention and getting into snowboarding or staying into it and learning new tricks partially because they watched a Think Thank movie, that’s amazing.

What’s your favorite environment to film and/or ride in? Urban stuff or backcountry stuff?
My favorite is to unlock a hidden opportunity in the terrain, whether it be a street spot or backcountry or somewhere in between. Just seeing an opportunity, some new rad way to do a trick, that moment that your brain figures it out and you know it’s on. And then being able to do that just about anywhere you go, that’s what I’m all about, if you can do that at every spot then it’s nothing but possibilities.

What’s next for Think Thank? I assume you’ll drop another mindblowing shred flick about this time next year? Any other cool projects you are working on that you can talk about?
We have plans for sure. Christina “Pika” Burtner, my wife, is full-time working on Think Thank now so she’s been doing a lot to get us caught up and in the position to make our best effort yet this coming season. I love our crew, Ross Phillips, Sean Lucey and of course Sean Genovese. We all work great together and there is quite a bit of passion to keep pushing in to the next level of what we do for Think Thank and snowboard videos in general.

Any last words?
Thanks to all the riders for putting your trust in Think Thank and me and risking it all out there for Mind the Video Man, I think you guys should be really proud of what you’ve accomplished! And thanks to you guys, Submerge Magazine, see you at the show! 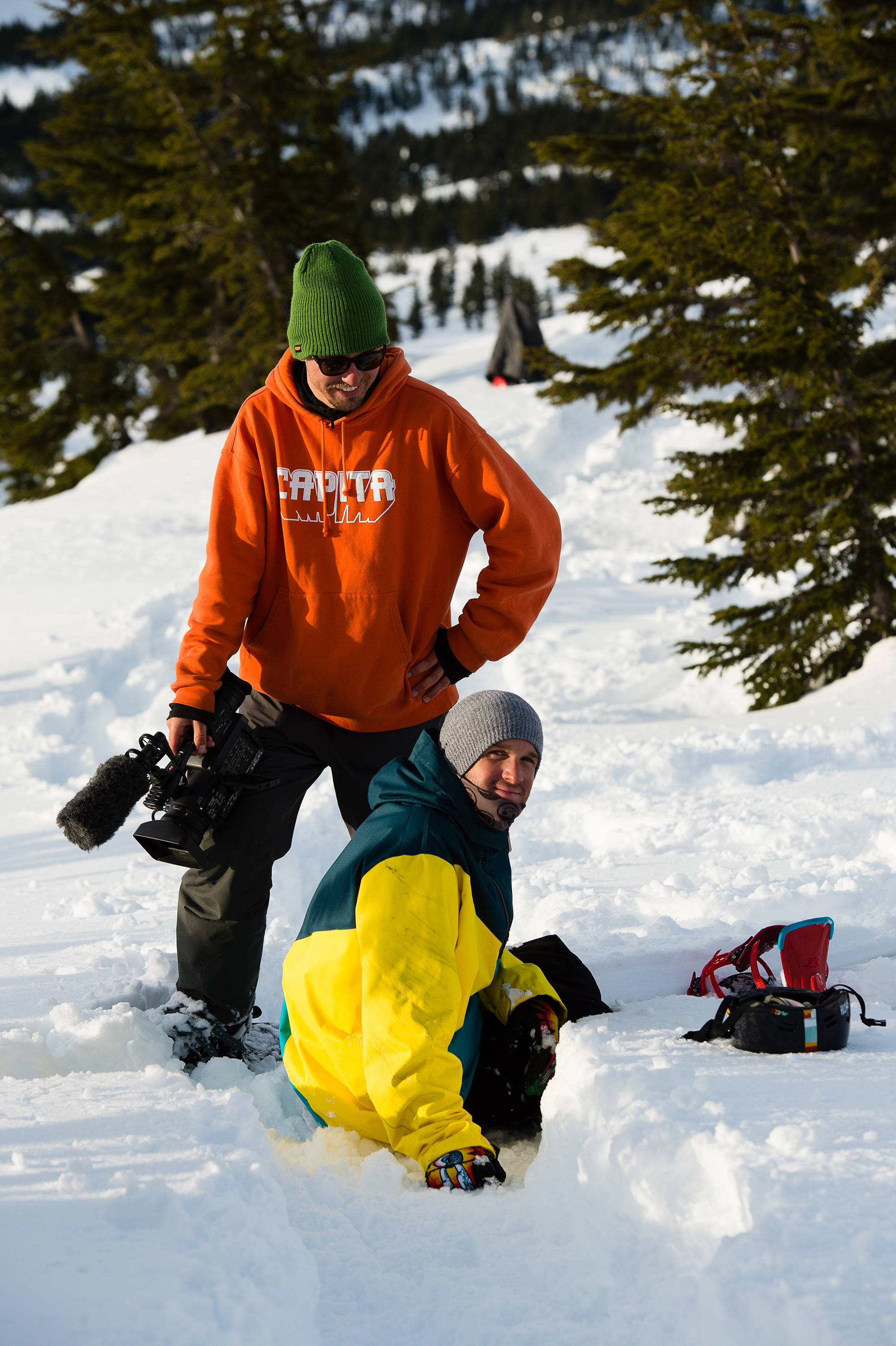 Think Thank’s new film Mind the Video Man will air at Ground Zero Boardshop’s annual snowboard movie premiere party on Friday, Oct. 19, 2012 at Ace of Spades. $14 in advance with tickets at all GZ locations, $16 at the door. Free lift ticket to Sierra-at-Tahoe with paid entry. All ages are welcome and there will be $10,000 worth of gear given out to the crowd. Doors open at 6 p.m. For more info or to order a copy of the film, go to http://thinkthank.com/