The White Oak Chronicle • A Cup of Coffee with Author Randall J. Barsch 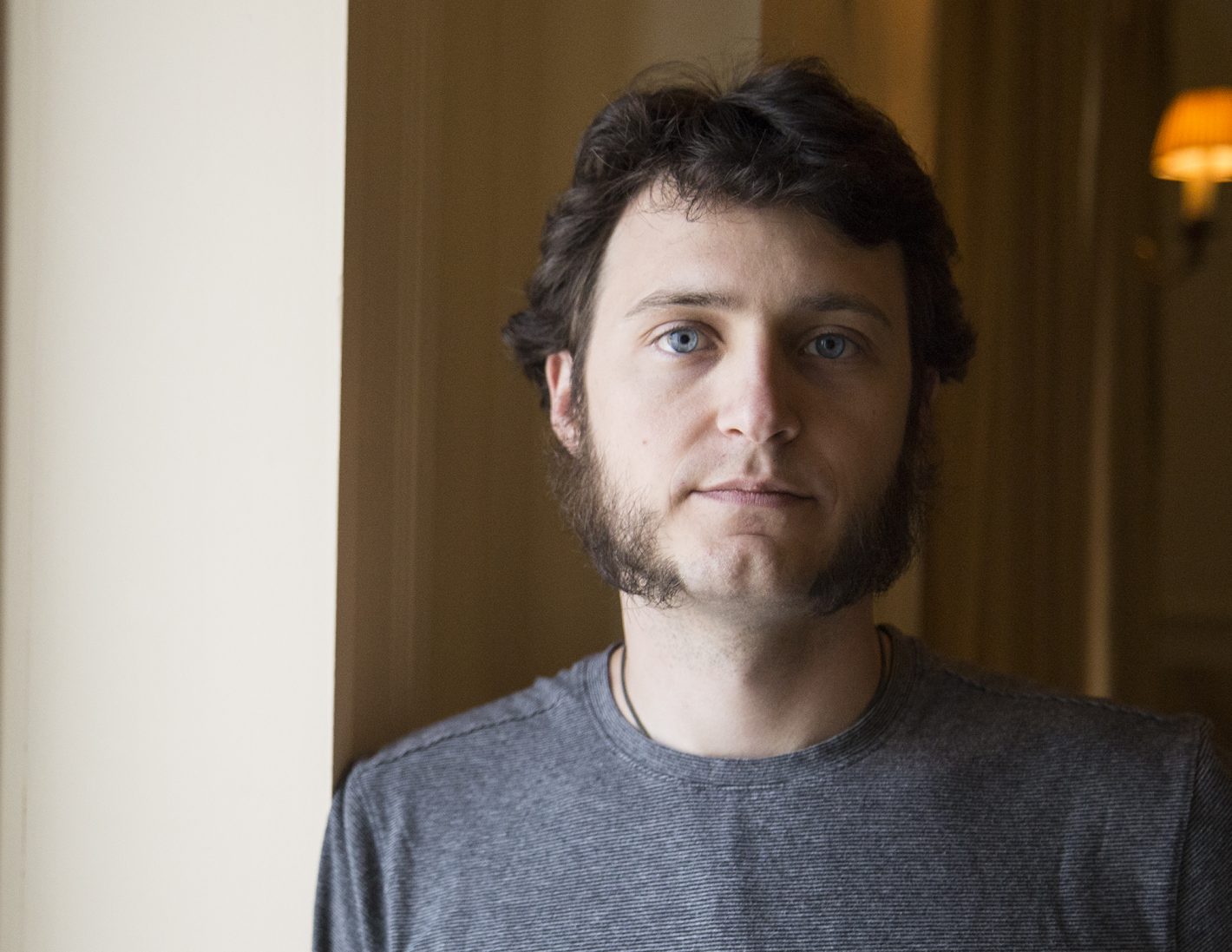 Randall J. Barsch doesn’t look anything like you’d imagine. Even at 31 years old, I’m willing to bet his bourbon benders, which pepper his newly completed novel, start with having to pull out his driver’s license and prove his age. His face is bright with sober intensity, but the age and weathering he lacks on his face he more than makes up for in his work. Like a fine bourbon, Barsch’s writing in The White Oak Casket is ripe, bold and sophisticated, ricocheting back and forth between audacious characterizations and winding peregrinations. Consider this passage, which opens Chapter 7:

“Waaahh,” a voice screamed, waking me up in a funk. “I’m all wet.” It was V’s voice and she’d just been struck by a sprinkler from what I could tell, but I was lying rather precariously in a tree at that moment and wondering how I hadn’t fallen off during the night.

“I’m up here. Are you alright?” I yelled as I started to make my way down from the tree. What had my father gotten us into last night?

“Up where?” V called back. “I’m in a tree,” I shouted as I continued to climb down. “Why are you in a tree?” My head was throbbing and I couldn’t tell where we were yet. I took a moment to look around, mostly at tree branches. I noticed a notebook hanging above me and I climbed back up towards it instead of continuing down. When I reached it, I could see outward and recognized quickly that we were at The Holy Oaks Cemetery where my mom was buried. It was bright out and there was no telling how early it was; the sky was empty, not a cloud in sight.

My first thought was to honor the spirit of his book by getting buzzed on bourbon for the interview, but it was 9 a.m., and I have a kid, so we went in for another intoxicating drink—coffee.

Tell me a little bit about what brought you to writing?
I’m from Sacramento, born and raised here and pretty much lived here all my life. I’ve considered myself a writer pretty much ever since I could scribble more than just my name on a piece of paper. I originally started writing The White Oak Casket—the first few chapters of it, but then I didn’t like the direction I was heading and so I just took a break from that and shifted more in journaling all the time. Lots of journaling for a long time to get to know myself better.

It’s funny because journaling has this dual purpose; not only does it make you a better writer just by virtue of having written something, but it also makes you more aware of your sensibilities and your voice as a writer.
I was kind of inspired to do it from reading Dracula. I really like the Jonathan Harker journals. I have never done a story like that yet, but I do want to do a story that is kind of written in a journal fashion.

Can you give me a little synopsis of what the book is about?
This one is mostly based on things that have happened in my life and the lives of others around. I just pieced together a bunch of worst case scenarios that I’ve experienced or heard other people experience and I started writing this. I got to what is now the third chapter and decided to kill the protagonist’s father, but I didn’t really like that so I set the book aside. I didn’t touch it or think about it. I picked it back up when I started going to Sacramento City College about four years ago. I decided maybe the father doesn’t die. It’s a botched suicide attempt essentially, but then I thought that since I was dealing with grief and tragedy, someone’s still got to die, so I killed the mother instead. You get that twist and style of it. I remember trying to remember all these different stories, like when you’re talking to your friends about what happened last night, and that kind of feeling of trying to piece together how the protagonist James just lost two weeks of time spent in this life and trying to figure out what led up to that—how much his drinking got out of control or how much it’s been out of control and how much he has been acting out of character.

Do you see yourself in James?
It’s definitely like a loose alter ego, and I’ve calmed it down and turned it more spiritual from when I originally wrote it. A lot of it has changed. It became really focused on grief and tragedy so I rewrote a bunch of it. It was still wild but I wanted to focus on that point of this kind of self-medicating thing as unhealthy and as the drinking progresses, things never really stop but the way the character drinks and the way his friends and family around him drink changes drastically through the story.

So many people talk about writing a novel as a life achievement; they plan to retire and then write their novel or whatever, and it’s a lot harder even than most people probably imagine. What was the hardest part for you?
Editing and revising because I write very much the vein of [Ernest] Hemingway or [Hunter S.] Thompson. I can get a solid chapter, maybe two, in a good night and then I have to go back and I find massive spelling errors. So many times like “there” instead of “they’re,” and there are weirder ones that I do more commonly like “loose” instead of “lose” or whatever.

Peter De Vries wrote something like, “Write drunk and edit sober.” I think that’s the key to it, right?
I did some of that, at least with the second revision, editing while drinking a little bit but when I came to the final editing and things like that it’s pretty much sober.

Talk me through how you decided to publish it and how you got it published.
I always had those dreams of self-publishing it. I wanted to print it, do everything myself and I realized how overzealous that was, so I had learned about Amazon’s Kindle Direct Publishing, in which you own the rights, you get really good royalties, but you do all the marketing yourself—that’s the downside to it.

Book publishing is like an Indiana Jones door. I think for a long time, writing novels was a good way to make a living. Now we’re just sliding under the last crack of it.
It’s definitely more difficult. There are a lot more people out there getting their work out, but there is also a lot less readership. It kind of falls off substantially. There is so much stuff out there, but it’s just not that high quality, and if you don’t have a track record or a bunch of awards or a degree, people aren’t going to take your work seriously.

What’s next for you, what are you writing right now?
I’m working on a handful of different things, but it’s obviously slow going at times. There are a few different things that I really want to do. But I don’t think I’m going to be able to get them done in the timeline that I want to. I actually finished a short story about someone who has a mental disorder and he breaks out of the mental institution because his wife died and his little girl out there will be put in the system. Next thing you know is he’s all groggy from the medications and setting his house on fire. I entered that into a competition but I feel really good that it’s going to win because I looked at the previous winners and thought, “If this is what I’m competing against this year and I don’t win, I’m going to be disappointed.” Having those awards behind me would have made marketing so much easier.

Tell me a little bit more about your process. Do you work from an outline or some sort of story structure?
When It comes to starting a project, a lot of the times I don’t tend to do an outline. I didn’t start outlining this book until I probably got halfway through when it was starting to get way too complicated, and I had to make sure all this lined up chronologically. So I had these things that happened three months ago and another one that happened two weeks and this is happening in the future. I’m still trying to figure it out and to figure out does any of this actually make sense at all? If I can find that really quiet space, I just start writing. I remember being taught at some point in my life that a really good opening is the first line that draws the reader in. So I was wondering what can I come up with that just sounds outrageous. This one starts with, “The sun cracked in through the window, a slow rolling fire until the entire room was ablaze.” Now, the room is not on fire, but it’s that kind of light blinding intensity … You read that first paragraph, and you think he’s hungover.

How do you describe yourself as a writer?
That’s a great question! I have a style as very much kind of a cross between [Hunter S.] Thompson and [Kurt] Vonnegut. Even though it’s fiction and it’s not based much on my own life except little bits and pieces, it’s very gonzo. The protagonist James becomes a journalist. He is very wrapped up in his stories. I’ve never worked in journalism but this is kind of based on what I picked up from reading about it and seeing a few films about how these things work.

People always say write what you know, and in a certain sense, that’s true, but you wonder how would we have things like science-fiction. Writers don’t actually have to go to Mars to talk about it. Stephen King hasn’t ever actually murdered anyone.
I think when you’re getting started on writing, it helps a lot. That’s how this book started. I used to drink a lot. I was dealing with a lot of issues so the story works great for that. One of the things that made me determined to get it out there was the death of my friend that I’d always considered a brother. He died two years ago on June 25. We met in middle school and we considered each other family. I dedicated the book to my wife and in honor to Josh, because it’s about dealing with grief and tragedy. In the rewrites and the edits of that I was able to connect a lot more with that.

Where can people get your book?
They can always find it on Amazon. It’s print on demand, so you can do shipping if you have prime. There is an eBook version on it available on Amazon, as well. Right now the price of that is set at 99 cents. I don’t know how much longer I’m going to keep it that way. So if people love eBooks they can check it out. If you buy the book, you get the eBook free on Amazon, so that’s a plus. I have copies of them. I really just want to start getting my name out there, and I feel like it’s a powerful book that can change a lot of people’s lives, especially people having similar struggles.

As mentioned, you can order Randall J Barsch’s novel, The White Oak Casket, on Amazon. You can also follow the author on Instagram, @the_white_oak_casket.