Say It Ain’t So Mittens! 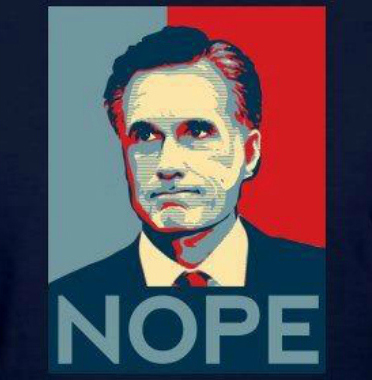 We were almost safe! The world seems to be spiraling out of control and ready to collapse at any moment, but we almost had ourselves a real savior! He’s tall, famous, incredibly wealthy, some might say dashing and he has a healthy fear of God. With stats like that, you’d think I was talking about Uncle Sam himself, but I’m not. No, the man that was going to save this country was none other than Willard “Mitt” Romney, and he might have been President of the United States of America if you all weren’t a bunch of stupid, mean jerks!

You are not caught in a time warp. This is not 2008. Nope, not 2012 either. That’s right, the Romneybot almost ran again. He was so close to proving the theory that the third time truly is a charm by taking another crack at the presidency in 2016. It was going to be so exciting! Now he changed his mind, and I have to cancel my “Romney 2016” face tattoo appointment this week. It was really going to make my face just pop!

There was a lot to be excited about, after all. Romney had promised to make ending poverty the central focus of his campaign. He also planned to put his private and religious life into the forefront for the public to see, which probably would have been a hot mess. The Washington Post even went as far as saying, “Romney [was] determined to re-brand himself as authentic[…]” I don’t know about you, but to me, nothing screams, “authentic,” like a man re-branding himself every four years in the hopes of convincing enough people that he is one of them.

Of course, if you ask Mitt, he hasn’t changed at all. He is the same old guy he’s always been; he just wasn’t allowed to show us exactly who that was until now. Romney claimed his advisers told him not to be himself in his previous campaigns, which begs the question, why not? If Mitt is such a normal, everyday Joe Six-Pack (albeit of nonalcoholic, non-caffeinated, unsweetened, unflavored, lukewarm tap water), why would his campaign advisers want to hide that from the public?

After all, for the most part, likeable people win presidencies. JFK was not the savvy politician that people remember, but people liked him (Lee Harvey Oswald and Fidel Castro excluded), so he got elected. Same goes for Ronald Reagan. The Gipper was an actor before he was a politician, so he knew how to turn on the charm for the cameras. His policies did not do much to help the country, but people sure loved that warm smile and that friendly voice. In fact, they loved it so much that today he is practically a god on the right, despite all the harm he did. Barack Obama also knew that likeability helps, which is how he beat Hillary Clinton once and Mitt, twice, for the presidency.

Mitt took those lickings from two staggering defeats and claimed to have learned his lessons. This time around, he was ready to drink a beer (O’Doul’s) with your uncle, help your little sister get more followers on Twitter, and eat corndogs while singing, “Who Let the Dogs Out?” at the top of his lungs. He might have even allowed same-sex couples to hold hands in his presence if it got him to the White House, but it’s all for naught now.

Romney 2016 was going to show you that he puts his sacred garments on one leg at a time, just like the rest of us, and that it’s important that you hear how much he helps all of these poor needy Mormons out there. But what about the people who don’t subscribe to his faith? Was Mitt going to help them too? He said he was going to make poverty a central focus of his campaign, which sounds great. Unfortunately, given Romney’s history, this could have also just meant that he planned to call for the self-deportation of the American poor.

Even if he truly meant to “end poverty,” what would Mitt’s idea of helping the poor even look like? What does a man with a lakefront house, a beachfront house with a car elevator, a sprawling estate in Utah and an 8,700-square foot ski chalet know about being poor? Probably about as much as he knows about running for president, which appears to be jack shit. Sorry we won’t get to see the train wreck of a campaign you were about to run, Mitt! I’m keeping my fingers crossed for 2020!