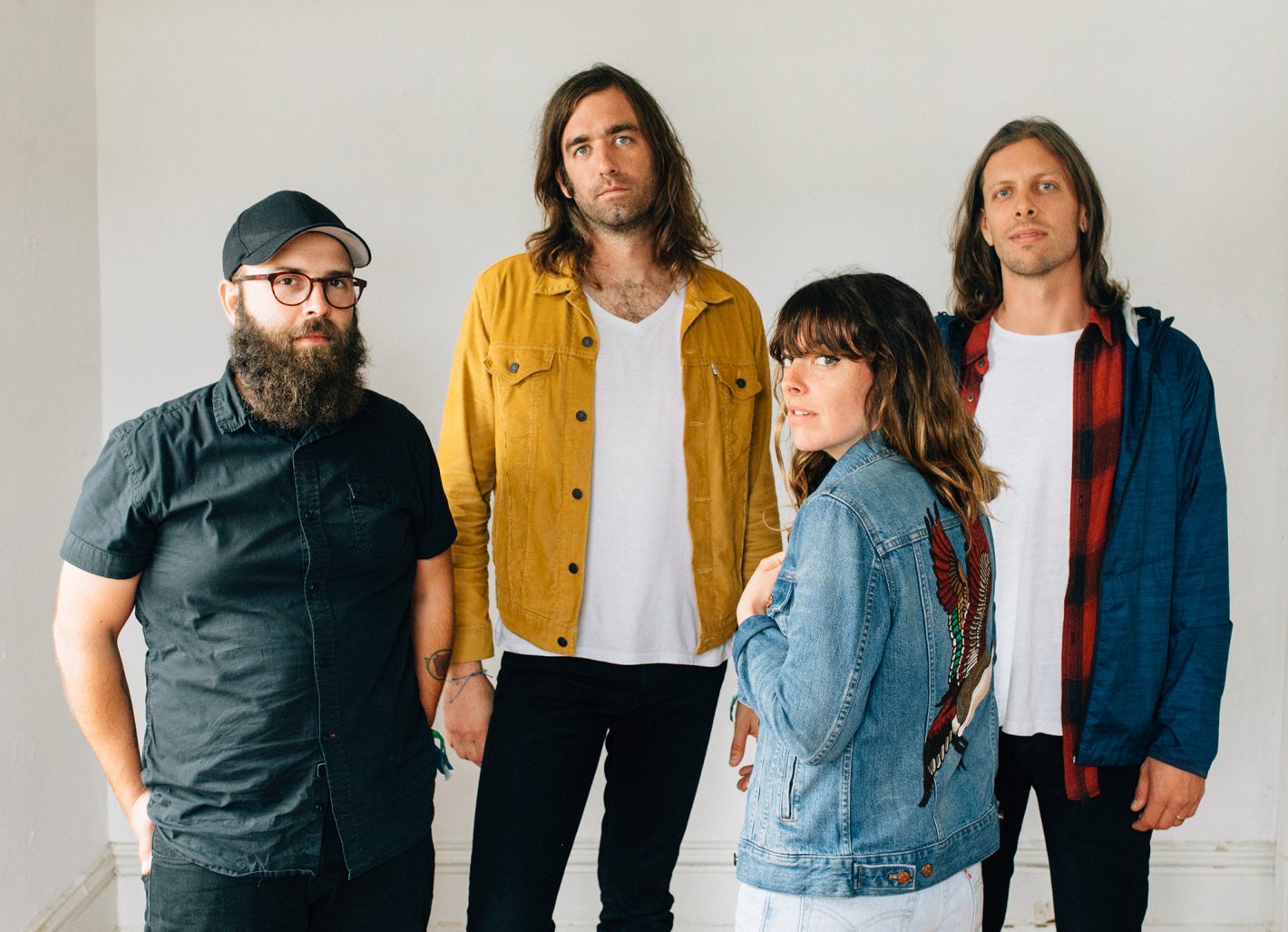 In the music criticism/appreciation realm, there are those records or songs upon which there is little immediate debate about their appeal. It’s a stone-cold scorcher, a slapper, a banger—choose your own adjective adventure. The point is that it’s a hit, or at the very least it’s very good.

The flipside to those somewhat lazy assessments (which typically drive the majority of pop music you hear on the radio) is the record as artistic statement—a textured, creative snapshot, critically adored, and therefore sometimes a challenging listen that those with enough time and willingness can be rewarded for upon receipt of repeated listens.

Philadelphia’s Hop Along is somehow firmly entrenched smack dab in the middle of these two spectrums. Defying easy categorization, the band’s catalog runs the gamut from freak-folk minimalism, to power-punk onslaughts, to new wave cut-ups and densely layered math-rock freakouts. The glue that holds it all together on each of their three releases—including their stunning 2018 LP Bark Your Head Off, Dog, released by seminal Heartland indie label, Saddle Creek Records—is vocalist/songwriter Frances Quinlan. The uninitiated listener is typically floored by the melodic range and crackling urgency heard in her voice. Backed by guitarist Joe Reinhart, bassist Tyler Long and Frances’ brother Mark on drums, the foundations for her literary lyricisms are given an enormously full-bodied, cathartic, provocative musical vehicle.

These sentiments, of course, are mined thanks to persistent listens of the aforementioned Bark …, but also from the band’s breakout 2015 album, Painted Shut, as well as their 2012 debut, Get Disowned. You don’t need the repeated aural visits to enjoy the music, but it’s somewhat of a disservice to the multi-layered approach the band injects their art with.

“The intensity is natural,” Mark explains during a recent chat with Submerge. “As far as music goes, and how we feel within ourselves, we’re all pretty intense about it.”

The intensity is delivered in complex fragments of songs, woven together through tedious editing and revisitation, incubation and marination on behalf of the band, and somehow sounding polished, invigorating and fresh, rather than “difficult.” Frances’ complicated melodic arcs seem to bleed through the speaker, stretching her voice to the absolute peaks of its range until it’s a moment away from snapping. And sometimes it does anyway, making the song feel even more alive.

“We’re a band where the song will sound pretty happy and peppy and the lyrics will be pretty devastating and heartbreaking,” Mark says. “I think we feel like the music and the lyrics should both play to their own strengths, and if they link up at times, or if they don’t link up at all, that’s fine. It’s really about how each song should feel, in our opinion.”

Bark Your Head Off, Dog opens prettily enough, showcasing Frances’ meandering vocals, which often beg comparisons that aren’t exactly there, including approximating a less-caustic Janis Joplin, or a more pissed-off Joni Mitchell. The vulnerability and catharsis of release is heard in lines like, “How simple my heart can be/frightens me/don’t worry we will both find out/just not together.” There’s a rich vein of empowerment coursing through the record—the downright classical “Not Abel” is festooned by strings and a jaunty vocal that Frances delivers in crushing fashion, eventually uttering a line that is repeated later on the album on “What the Writer Meant,” and which has become something of an anthemic touchstone to the album: “So strange to be shaped by such strange men.”

The trick in making the line work in both songs is testament to the collaborative efforts of the rest of the band.

“Lyrically, I trust my sister completely,” Mark says. “If she decides, ‘Ya know, the lyrics are like this, and the mood of the song makes it feel silly, so let’s have another look,’ that has happened. Otherwise we just allow everything to exist as we believe it should exist without overthinking on ambience or mood.”

This response is somewhat in contrast with what the band has cited as a fairly involved pre-recording editing process. During our call, the conversation consistently veers toward the logistics of performance—the mechanics of allowing enough energy and space for Frances’ songs to fully burst and bloom. As the brother of the band’s primary songwriter and sole lyricist, Mark defers to the subtle and oftentimes intense art of molding the raw clay of a composition into something altogether more collective, more realized and ultimately more representative of the vacillating emotions being expelled by Frances’ intoxicating wails.

“For the most part you just have to love it and know that you love it, and believe you’re doing your best work,” Mark explains. “A lot of the time we’ll work in fragments and then make it all come together. Or we’ll work in fragments and we can’t find a home for one of them no matter how much we like it and we toss it. I wonder if on the next LP we’ll revisit some of those parts … sometimes we do. There’s a few little snippets on Bark Your Head Off, Dog that were written around the same time as Painted Shut, compositionally speaking and lyrically speaking, that just never really found a home. There’s a lot of puzzle pieces.”

This process would explain the progressive nature of a lot of the songs on Bark …; the album is less aggressive than its predecessor, though only sonically speaking. Where the band’s affinities for distortion-heavy hooks and anthemic sing-along choruses are a little more veiled on Bark …, Painted Shut allowed the sharper edges of the band’s collective influences to shine.

During our conversation, there is also lots of talk about what Hop Along listens to in the van while on the road, which offered a glimpse at the band’s wide-ranging regimen. From Songs:Ohia to Obituary, Van Morrison to Sun Ra, Rancid to Elvis Costello to Andy Shauf, the impromptu list Mark reports somehow makes perfect sense when attempting to home in on the cross-section of sprawling inspirations heard in Hop Along’s oeuvre. Even better, Mark reveals that Frances is typically sketching and not listening to much music at all on long hauls. She is, after all, responsible for the artwork adorning the covers of each of the band’s releases.

“I’m pretty sure we all agree on the last Paramore record, too,” he adds.

Bark … was self-produced and recorded at The Headroom Studio in Philadelphia by Reinhart and engineer Kyle Pulley, who co-own the space that Hop Along has done most of its recording work. The latitude of having their own studio to work at, without the strict parameters of a hard clock in-clock out process, has paid huge dividends for Hop Along. To wit, they’ve received praise from every major music media outlet, landing on every 2018 year-end list that people care about (Rolling Stone, Pitchfork, Noisy, Stereogum, Paste), cracked the top 50 on Billboard’s Top 200 list and will be performing at this year’s Coachella festival during the West Coast tour that sees them stopping at Harlow’s in Sacramento April 12, 2019.

“If I could give advice to a young band, it would be this: Realize your power,” Mark elaborates. “If you have access, be your own studio, your own producer, whatever it may be; realize that those things are not only good enough, they’re an extremely valuable resource, and you’re lucky.”

Harlow’s will be a sweaty, lovely mess when Hop Along rolls into town Friday, April 12. Portland rockers Summer Cannibals open this all-ages show. That’s right: ALL AGES. Doors at 6 p.m. and show at 6:30. Tickets are $17 in advance and $20 day of show. For more info, visit Harlows.com, and visit Hopalongtheband.com or anywhere else on the internet for more on Hop Along.