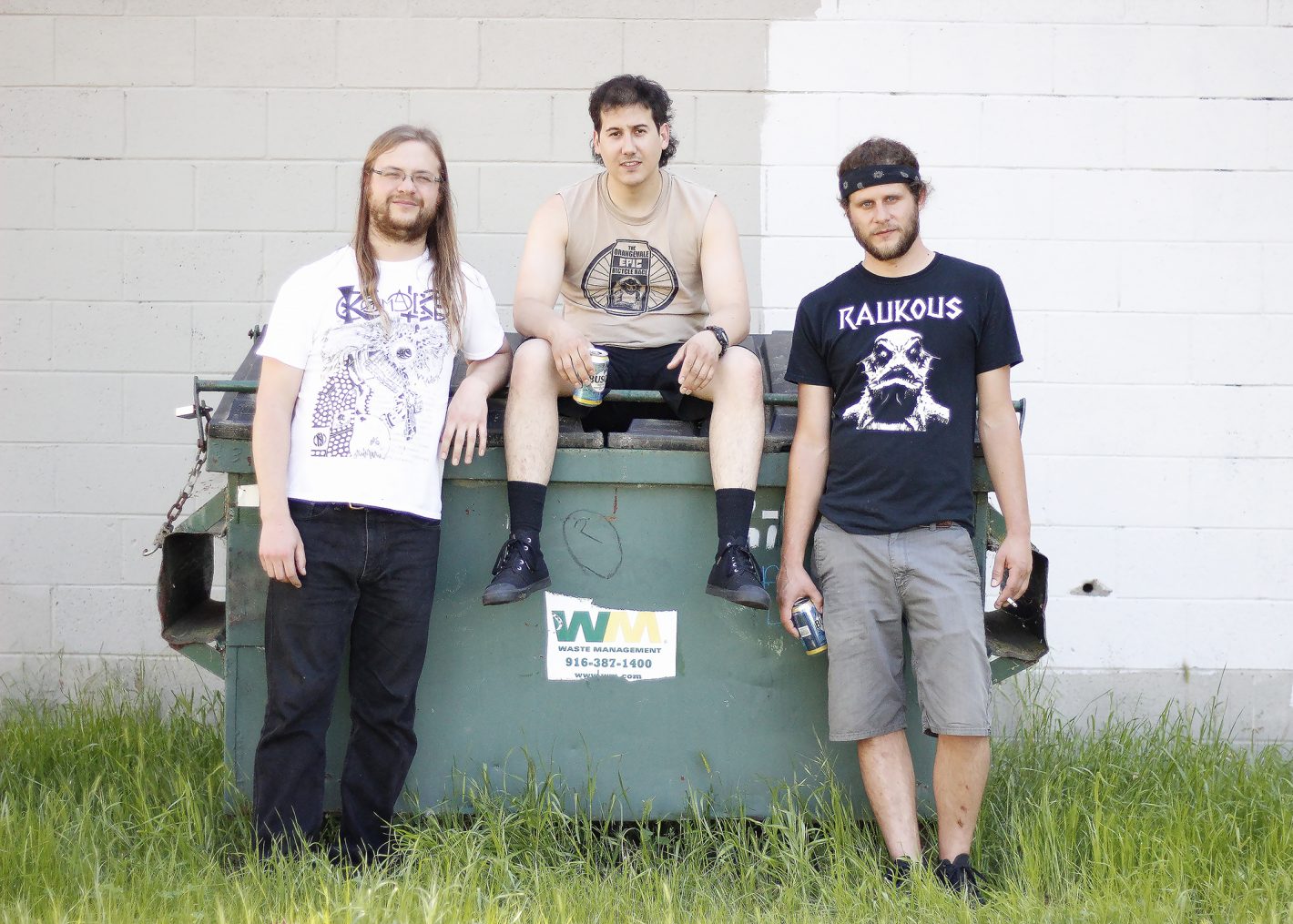 Occasionally, I get a chance to write about a band I’ve gotten to know personally in Sacramento’s punk scene. In writing up those interviews, I tend to quell my excitement and make a point to stay out of their narrative.

But with Pisscat—a three-piece punk band from Sacramento whose new EP, A Normal Life, comes out later this month—I can’t create such distance. I know the band too well and, simply put, I’m here to tell you about them because they rule.

My band (The Polyorchids) played the release show for their last EP, 2015’s Convenience and Chaos, which also featured four tracks from their debut, Smashed and Rehashed. The following year, our bands did a small tour together, cramming amps into our cars and flopping on floors in a run of cities surrounding Lake Tahoe. They blew me away nightly.

Pisscat plays a punishing brand of hardcore punk, dynamic in its style, but gimmick-free and direct above all else. The band features Jake Deane on guitar and vocals, Dustin Love on bass and vocals and Brandon James on drums.

The three are essentially lifelong friends, having met back at Louis Pasteur Middle School in Orangevale, where they and a fourth member would pick up their instruments and form their first few bands: Mutiny Beef, Malady of Discontent and Final Heist.

“We went through several lead guitar players,” says Love. “Then after high school, we became a three-piece.”

Final Heist dissolved around 2010, and a few years passed before the three regrouped and formed Pisscat. In our recent FaceTime interview, Deane and James squabbled casually over the specific dates while Love chilled quietly between them—a pretty decent snapshot of their individual personalities, to be honest. The three have a sibling-like rhythm that can only come from knowing a person since childhood.

Pisscat makes zero attempt to characterize themselves as anything other than exactly what they are. When I ask them one of those music journalist-type questions like, “What does A Normal Life represent in the evolution of Pisscat as a band?” the answer is basically a shrug.

“We don’t have any specific motivations for changing up the sound or anything,” says Love. “We just write songs we like and want to play.”

The new EP has five songs, ranging from under a minute to two minutes and 46 seconds in length, and all of the tracks ride directly into one another—the next snapping into gear before the feedback from the previous recedes. It’s an EP in keeping with their previous work, but it has its new elements, too, whether they contrived them or not. Deane’s voice dips to hellish new lows on the sludgy “Quicksand” before flipping the script into a full-speed, bouncy and anthemic final minute.

Pisscat is meticulous in their songwriting and slow with their output, obsessing not only about arrangements, but also lyrics, most of which come at you in fitful screams. A common thread is working-class struggle, blunt and brash in its delivery, but never preachy.

These are songs about the frustrations of daily monotony, soul-sucking jobs, ingrained consumerism, shitty bosses—all delivered with the art of a perfected punch. A song like “Limp Wristed” takes just 41 seconds to expand beyond a chronic injury, to the debilitating effects it can have on playing music, to masking pain and boredom with drugs and alcohol, to the crippling uncertainty that comes with not having a solution to the problem.

And then there’s “Boxes,” which is a sprint through the buildings, devices and spreadsheet cells that set the foundation for many of our professional lives.

A Pisscat song is dynamic to its core, changing from one thing to another from the four-count clack of James’ drum sticks to the ringing feedback of the final chord. They are among the best punk bands in Sacramento, and we’re lucky to have them.

Following is an abridged version of our recent conversation.

You guys met in middle school. Did you already play your instruments?
Brandon James: What happened is nobody played drums and they said you got to play drums. Jake sold me his dad’s drum set for $100.
Jake Dean: We used my dad’s instruments. It made sense for Brandon to play drums because he’s so loud. I played guitar and Dustin played guitar for a bit, too.
Dustin Love: Basically I wasn’t very good at guitar so bass seemed like the best choice.

How did you end up recording the version you eventually put out?
DL: We bought something to record straight to the computer. It’s the same thing we used with Convenience and Chaos later.

A Normal Life is Pisscat’s third release, but it’s the first that you did in a studio. How was that different?
DL: I wanted to do it in the studio because it’s a pain in the ass.
BJ: Everybody knows Earth Tone [Studios] is dope. We had heard a lot of good things and a lot of the quality albums Pat [Hills] recorded. I busted out all of the drums one after another. Once I was done in the drum room, I was done. I didn’t do anything the second day except hang out.
JD: It was fun. Slow pace, easy. We did it last summer. It was hot as fuck.

“Limp Wrist” is about chronic pain you’ve battled in your strumming hand, Jake. How is that feeling these days?
JD: It’s, you know—it’s not limp now, but it’s not what it used to be. How do I navigate it? I just do. I stretch it. I don’t do anything special, but I did learn some stretches I still use I guess.

“Boxes” is the first song that Dustin carries as the primary voice. What’s the story behind that song?
DL: I work in an office, so that’s where it started. I like my job, but I think a lot of people I work with don’t like theirs. That’s kind of how it started, and then the second verse is more about consumerism—working a job you hate so you can buy stuff from people who hate their jobs, too.

How does a Pisscat song come together?
JD: We try to bring something fully formed, I guess. We all have input from each other. The songs are better when everyone has a say. Even after we’re finished we add more.
DL: But sometimes it’s just an idea, a verse and a chorus.
BJ: We’ll learn the parts and then we jam on them. When we’re jamming I pretty much do whatever, but I reel it in as we get the parts down.
JD: We try to make them not feel boring. Sometimes it’s just a minimal change from verse to verse that not everyone even picks up on. We try to change it up.

The songs on A Normal Life ride directly into one another without silence. What was behind that decision?
DL: It feels like a live set.
You keep the energy going instead of just having a collection of songs.
BJ: It’s the same thing we did for Convenience and Chaos.

Tell us about the release show on Feb. 28.
JD: We invited bands that we like, but bands we don’t play with all the time. We wanted to make a different show and make some new friends. We’re just going to play our set. Each side is going to get played in its order.

What is Pisscat up to in 2020?
JD: We’re going to do some short out-of-town weekend things—a couple of shows here and there. And hopefully our next EP will come out sooner than the next four years.

Catch Pisscat’s EP release show at Café Colonial (3520 Stockton Blvd.) on Friday, Feb. 28 with Omnigul, Original State, Good Shit and No Pressure. Just $5 at the door, and the show starts at 8 p.m.