The High on Fire Tour Machine Is Unstoppable 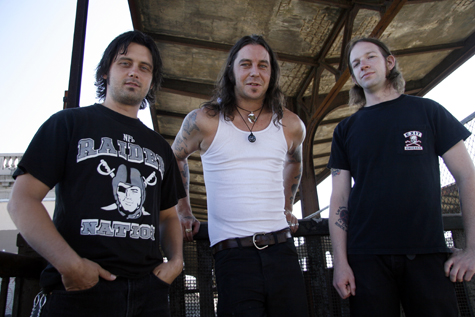 Most guitarists do fine with six strings, but when you rock has hard as High on Fire’s Matt Pike, you probably need nine. Pike (formerly a member of Sleep) has fronted Oakland-based metal group for the better part of a decade. But for the group’s latest album, Death Is This Communion, which was released in September of last year, the singer/guitarist employed a new tool during the writing process—a nine-string electric guitar custom-made for him by First Act.

“The instrument came in and I just haven’t put it down,” he said of the guitar. “I wrote a lot of the new record on that guitar.”

Writing for Death Is This Communion lasted about two years. Pike said that the “hard part was picking the right [riffs] and organizing them all together, and then putting lyrics to them and leads.” He credited famed Seattle producer Jack Endino for assisting the group with trimming the fat.

“He pushed us to play our best,” Pike said. “He really is a good producer like that. You could call him that kind of producer whereas Steve Albini [producer on High on Fire’s Blessed Black Wings] took more of an engineer approach—he’d throw ideas at you, but doesn’t really push you in that way where he’d say, ‘I think you’ve got a better take in you. You should try that again.’ It’s good to have a guy who’ll say, ‘I think you could do that a little better.'”

“He was really excited about it, which is always good when a producer or engineer is excited about doing a project,” Pike continued. “Usually they put their heart and soul into it. It’ll come out that much better.”

Other than assisting him in the writing of the latest record, Pike also said that his custom guitar has benefited the band in the live setting, where High on Fire truly lives up to its name.

“The nine-string, for me, is really good for live shows because it puts out a lot of sound for one guitar,” Pike said.

“I’m the only guitar player/singer, so it kind of helps fill up the room a little.”

Anyone who has ever seen the group live should know that High on Fire put out “a lot of sound.” More akin to witnessing a stampede of brontosaurs than a rock show, the group’s performances hit hard—and in great frequency. Touring relentlessly, High on Fire give fans ample opportunity to experience the band in person. The group has spent as much as six consecutive months on the road.

The schedule does take its toll, however. Submerge caught up with Pike while he and the band were preparing for a show in Allentown, an old Pennsylvania industrial town that is probably best summed up in a song of the same name by Billy Joel that goes, “Well we’re waiting here in Allentown/For the Pennsylvania we never found/For the promises our teachers gave/If we worked hard/If we behaved.” Pike was having difficulty recovering from the previous night’s festivities.

“Sorry. I’ve got to put some ice on my face real quick. We played at this like, carnival funhouse type thing last night, and I took these sugary shots,” he said with a laugh. “I feel kind of like death today.”

The “carnival” he was referring to was Mojo 13, a venue in Wilmington, DE (surprisingly, a state Pike said he hadn’t played in) that was decorated with “all this funhouse shit in it.” By the time High on Fire reaches Sacramento, it’ll be the second to last stop on their US tour, which began back on Jan. 17. After returning home, High on Fire will have just six weeks off before heading out on the Megadeth-helmed Gigantour, which will once again have the band traversing North America until the end of May. When asked how he keeps his energy up for such long stints on the road, Pike joked, “I don’t know. You learn how to fake it really well.”

“For all the drinking and partying and shit that you do, you gotta take vitamins and drink tea and try to get out of the van and walk—get some exercise, you know,” he went on to say. “Loading gear helps. Sometimes when you help the crew it keeps you strong.”

Though touring would seem to be old hat for him at this point, Pike seemed genuinely excited about getting picked for Gigantour.

“I think Dave Mustaine [Megadeth frontman] just likes our band or something so we got picked for it,” he said.
Pike later admitted that Peace Sells”¦But Who’s Buying? and Killing Is My Business”¦ And Business Is Good! are two of his favorite albums. Pike reported that he also got to meet Mustaine during a photo shoot.

“He’s a pretty trippy guy,” he said. “It was kind of weird, because I don’t get star struck that easy, but I was kind of star struck, even though I didn’t act like it. That’s the fucking man, dude. That guy’s taught me a lot about guitar playing, that’s for sure.”

Though High on Fire’s sound is deeply rooted in metal, Pike acknowledged that their crowd is not made up exclusively of longhaired Hessians.

“Yeah, man, we get some weird crowds,” Pike admitted. “We don’t get a typical crowd. Our crowd’s kind of cultish. A lot of people who you wouldn’t think were into metal like us—just, like, blue collar and white collar weird fucking people who go to shows.”