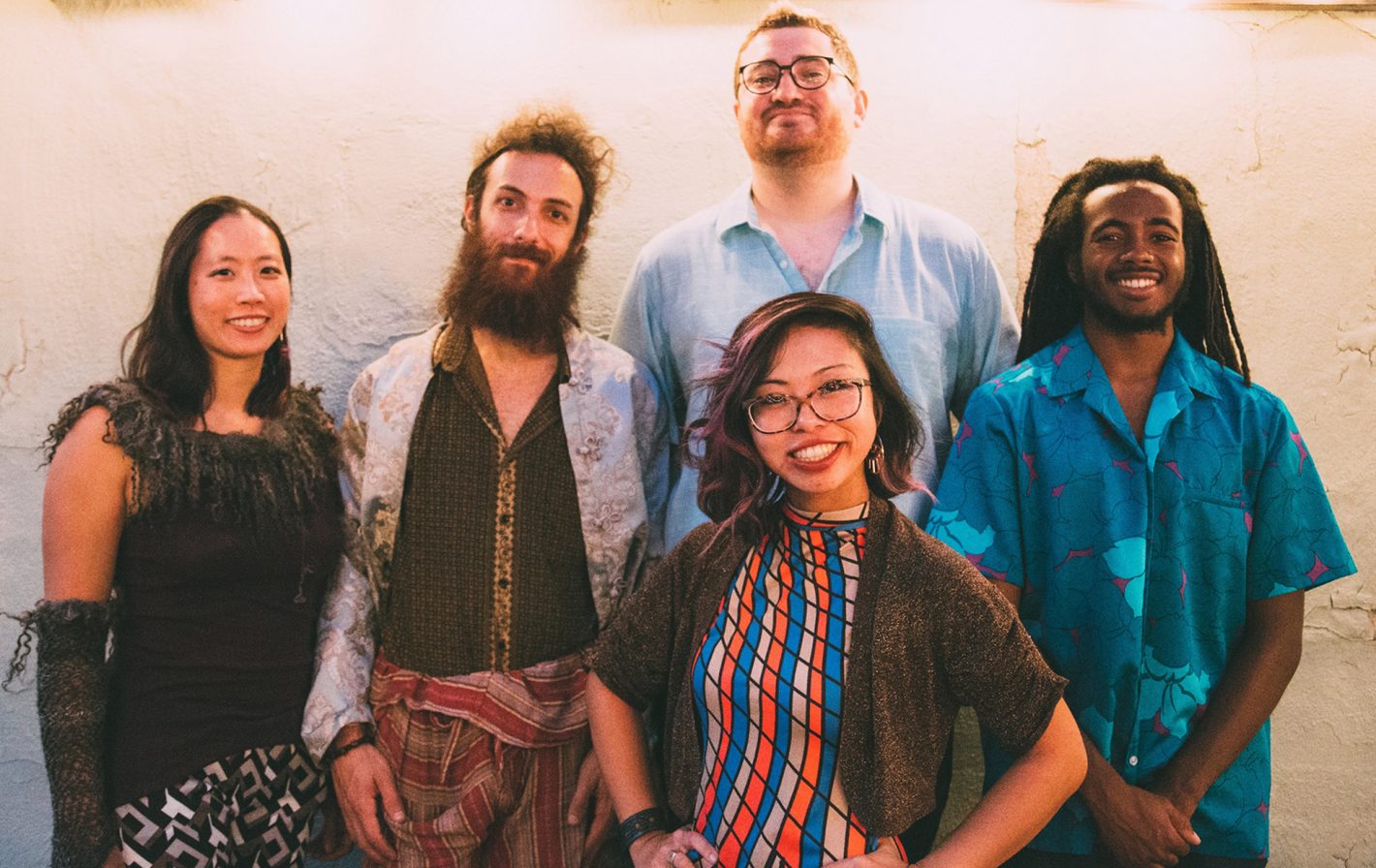 There is a sonic boom happening among women of all mediums and industries. Whether through art, politics or music, females are owning their truth and expressing it unapologetically without shame, guilt or insecurity. Submerge got the chance to interview one such inspirational female contributing to this era of woman power, Liz Kat, a multi-talented vocalist, keyboardist and frontwoman of Davis band, The Midnight Dip. Kat chatted with us about bringing The Midnight Dip together, their new EP and the power of turning negatives into positives.

The genres and sounds The Midnight Dip explores would be hard to put into any box. In my first interaction with their tunes, my impression of The Midnight Dip was of a gypsy-esque variety, with an array of contrasting instruments such as accordions and banjos, among others. I imagined it as the perfect music for steampunk events or hipster circuses.

But Kat describes their music style as, “A mixture of sweet and salty with a bit of everything in between.”

While my ears continued through their kaleidoscope of sound, I heard classic funk, jazz and psychedelic thrown in. Their discography offers powerful lyrics and original music written by the frontwoman herself. And above all, The Midnight Dip hopes to inspire others, give people a voice, and contribute positively through the power of noise.

For seven years, Kat had been a part of bands with people she admired and linked up with in the local music scene. However, after her last experience, she was left deeply unsatisfied. This was due to the lack of mutual respect in the band and the irritating machismo attitudes that one can experience when being the only woman in the group.

When asked about her experience Kat replied, “I’ve been in tons of bands with musicians and friends I know in the community here. But then I was with this all-men band that had a strange resistance to having a woman contribute equally creatively. They lacked the respect for me that they’d give to each other … I decided right then and there that I wanted to work for myself with my own band.”

She admits starting her first band wasn’t easy, but so far she has created a group that has gained quite a buzz in less than a year’s time.

Through musical acquaintances, friends and Craigslist, she was able to form the group. David Jacobin on guitar and banjo was her first to join. He’s been good friends with Kat for years. Then Patrick Langham from Big Sticky Mess introduced Kat to Kim Nguyen, who is also on keys.

“Patrick told me he knew someone who was awesome on keys. He said I’d really like her, so Kim and I met up and we spoke about art for hours,” Kat detailed.

With the rest of her crew, including bassist Alex Reiff and Zehrin Sims on drums, Kat’s made the same types of connections.

What is even more impressive, though, is that within a short time of playing together, The Midnight Dip has already released an EP titled, i hear voices.

i hear voices is Kat’s brainchild (with help of the band for arrangement) and covers an intense and difficult breakup in Kat’s life. The collection of songs goes through a process of love, loss and pain, and ends with redemption. The opening track, “Crazy Woman,” begins with delicate acoustic strings that pull the listener into a memory the subject is about to reflect on. Then the drums slowly roar and join in rhythm.

“Crazy Woman” specifically focuses on a moment in the abusive relationship where Kat’s ex-boyfriend chose to call her crazy while in a fight. At that particular moment, Kat felt shame and anxiety. She always assumed crazy had to only have a negative connotation.

But then she thought, “OK, I am crazy but in the best way possible. I decided to make the word positive and made this song as a way for me to accept the word as a positive thing. I wanted to put that aggression and realization into something powerful, so I put it in this song.”

The five-song EP is full of relatable gems a breakup album should consist of, especially in its honesty of how we all can act when heartbroken. Kat admitted, however, her music specifically targets a female audience on this EP.

While envisioning the concepts for i hear voices, Kat took much inspiration from comedian Hannah Gadsby. In her standup, Gadsby uses comedy to cope with pain. Kat explained that in this way, Gadsby is owning her pain and owning her story and that inspired her.

As for the cover art, painted by Will Durkee, it hints at the contents of the album entirely. Durkee’s piece offers a beautiful female figure in purples and blues exiting a body of water. While including swirls and waves within the piece, the women has a noticeable illustration of an eye on the small of her back. Kat describes how impressed she was with Durkee after he took her description of what she wanted and made the cover art as the result.

“I wanted a woman in water but I wanted her to be a part of the water in a way. I wanted it to all flow. He did so well that he is now my go-to artist for everything,” Kat said.

While she wishes they all practiced more, for now Kat says The Midnight Dip practices at least once a week. While the bandmates individually lead their own lives, they are all dedicated to the same goal. Above all, Kat will always adhere to this goal: “I want to run a band with as much transparency and fairness as possible,” she said. “Even if I write all the songs, I want everyone to have an equal opinion and be happy with the decisions we make.”

Though the the inner workings of social media and finances can be a difficult task, Kat is up for the challenge, frequently staying up late figuring out how to more successfully promote herself and The Midnight Dip. As for what’s next, Kat said The Midnight Dip will release a full-length album in a year or two after getting their feet wet with this first EP.

Make sure to catch The Midnight Dip at these upcoming shows: They’ll be playing the free Rock the Vote event in Davis on Oct. 20 (at Davis Commons, 500 First St., from 11 a.m.–7 p.m.) and at The Torch Club (904 15th St., Sacramento) with The Dirty Chops Brass Band on Oct. 24. This 21-and-over show is $6 and starts at 9 p.m. For more info, go to Torchclub.net. You can listen to i hear voices at Themidnightdip.bandcamp.com.