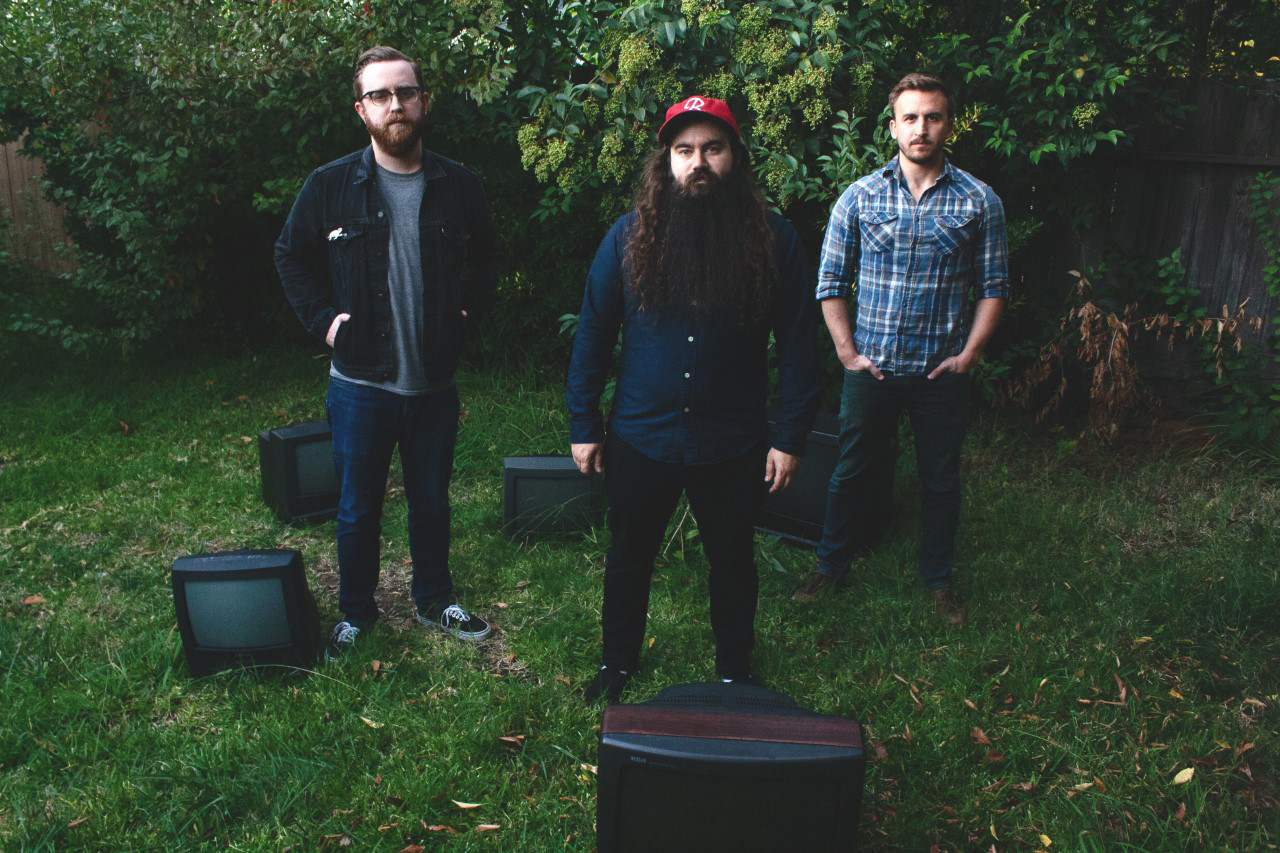 When Vinnie Guidera sets out to write a song, the end goal exists beyond those few minutes of music. He’s creating one piece of a larger whole—a companion both sonically and thematically to a collection of other songs. These aren’t short stories; they’re chapters in a book.

The book in this case is Shedding, the sophomore LP by his band, Vinnie Guidera and the Dead Birds. Guidera and fellow band members Kevin Hayes (bass) and Ian McDonald (drums) hail from Sacramento and have established themselves as a mainstay on the local indie music scene since the release of their debut album, Lows, back in 2015.

The songs on Lows were largely built from music Guidera had been writing before the band formally came together. On Shedding, the whole band was involved from the outset, and you can hear it. The highs rise higher and the lows dip lower, the breakdowns are intricate and dynamic, and three of the songs are purely instrumental.

That’s not what you might expect from a three-piece indie band whose frontman wields an acoustic guitar, but to project assumptions on Vinnie Guidera and the Dead Birds would steer you wrong. Guidera grew up on classic rock, learned to play guitar via thrash metal as a teenager and has since gravitated toward an indie-rock space populated by bands like Pedro the Lion and Neutral Milk Hotel. You can hear all of those influences folding together on Shedding, along with the lulls and crescendos of early 2000s Mogwai, especially on the instrumental tracks.

The band launched a Kickstarter campaign this summer to get the album made, hitting their goal in the first week. They self-recorded the whole thing in their own space so that the Kickstarter funds could be used to press the record (on clear lavender vinyl) and get it packaged.

Not only is Shedding a cohesive collection of songs, but it even picks up the thread of their previous album as it explores loss and grief, only now from a new vantage point.

The album kicks off with the tight palm-muting of “Wraith in Pages,” a catchy and anthemic opener that rides a tight groove for about two minutes before all three instruments take over and meander through the final 35 seconds, a glimpse into what can be expected over the next nine tracks. “Stasis” is the first of the instrumental songs and an absolutely hypnotic early-morning stroll through the woods. The back half of the album is anchored by “Part of the Act” and “Vacation White,” two singles that are currently available on their Bandcamp page for those looking to dip their toes in the water.

Submerge caught up with Guidera by phone to talk about the new album, which the band will play in full at their release show at the Blue Lamp on Nov. 17, 2018, with support from Shotgun Sawyer and Eugene Ugly.

How did Vinnie Guidera and the Dead Birds form?
It started out as a solo project. Kevin, Ian and I have been playing in bands together since I was a teenager and then I did a solo thing as kind of a side project. Maybe six years ago, we decided to do a one-off full-band show and it was a lot of fun. [After that] it became a permanent arrangement. The first songs were mostly solo songs that we built up as a band.

When did you start making music?
I’ve been playing guitar since I was 12 or 13. I taught myself to play listening to Metallica records. I remember being in junior high and wanting a classic white Flying V and long hair. I’ve played lead guitar for as long as I can remember and it’s nice to be able to work those elements into our material. Those end up being my favorite parts of the songs. I like the builds and the payoffs, where everything gets bigger and there are dynamic opportunities.

How would you describe Shedding, thematically?
The first record was mostly about low points and loss and grief. This one deals with a lot of the same things but from a new perspective, with a little bit more ownership of those feelings—from a perspective of being at fault and not being slighted by circumstance. Maybe the first one was a little naive and this is sort of shaking that naiveté and growing, not necessarily out of positivity, but out of necessity. You take ownership and look at your same experiences through a different lens.

Were the instrumental songs a deliberate choice from the outset?
Writing lyrics is kind of weird for me because I can’t do it unless I really have something to say from the start. To build out the song and arbitrarily write some lyrics over it feels unnatural for me. When we realized that the songwriting process was going to be different for this one, we started doing some jamming with nothing in mind—recording iPhone memos and using those as a point of reference, just writing as organically as possible. If you ever see a set list written out live, it’ll probably say “Jam 1” and “Jam 2” rather than “Shedding” and “Pushback” [two of the three instrumental tracks on the album].

How do you get that sound out of your guitar?
I first started playing through an amp because I can’t stand the way an acoustic sounds through a DI box. At first I had a practice amp with some built-in reverb, but as we started playing with the full band, I plugged into my Marshall and started experimenting with the different channels. And between the last record and this one I’ve started working with some pedals from back in the day when I was playing electric.

What drove the decision to self-record?
I’m a big fan of physical media and the physical presentation of a record. We already had to do a Kickstarter to fund [pressing the record]. We saved every dollar from every show and that softens the blow, but three years of gigging would not have covered the cost of making the record. That’s the life of a local musician. 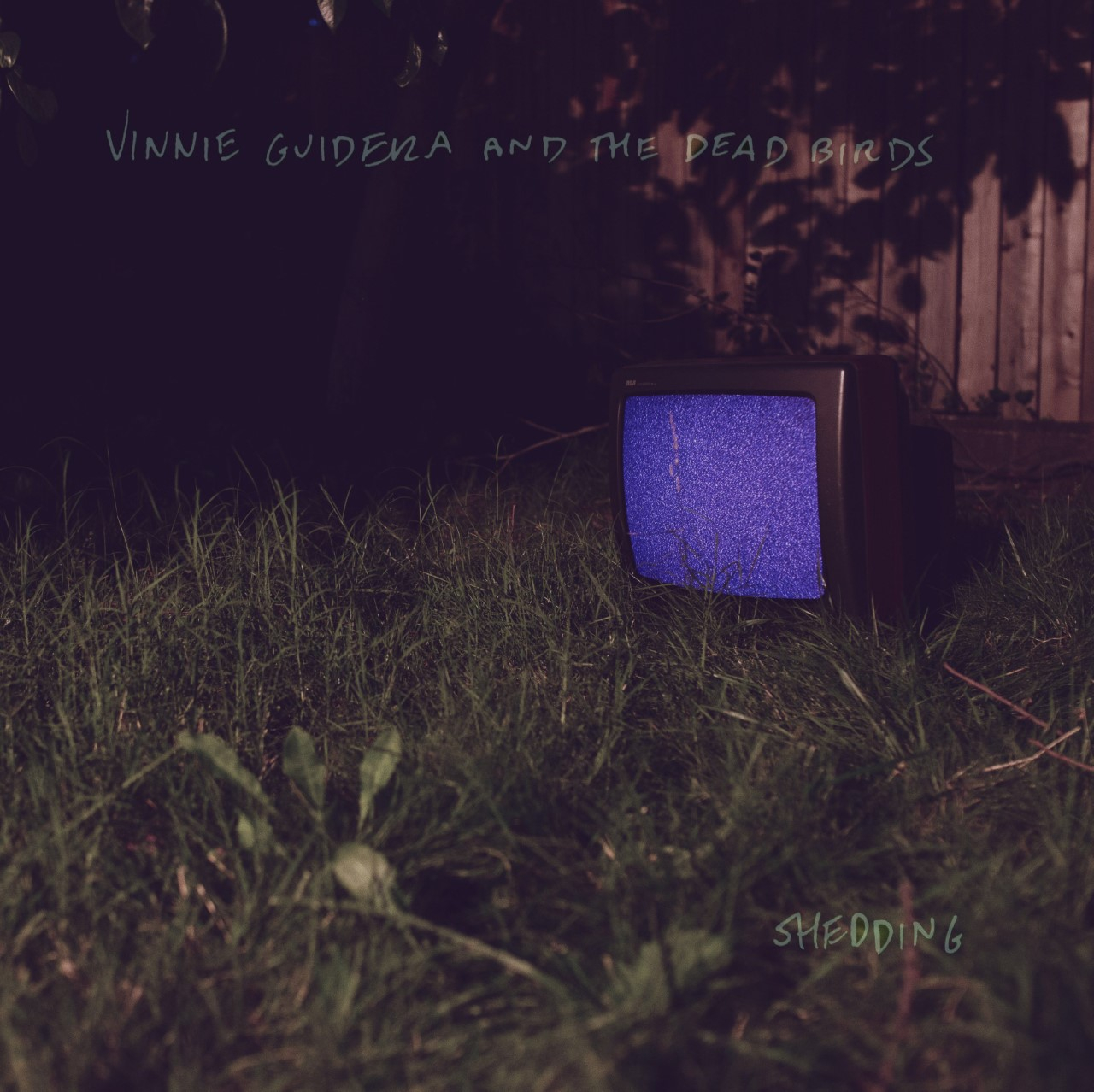 What went into the cover art for this album?
It was stressful. I borrowed one camera from Ian’s girlfriend and one from my roommate and tried to take a picture of a TV screen that didn’t look like garbage. It’s the same spot in my backyard [as the cover for Lows]. The TV idea came to me when we did a band photo shoot maybe two years ago with our friend, Denae Davis, a visual artist who works with TVs and static. It worked thematically with the music I was writing; there’s often a loud, abrasive discomfort to understanding as it relates to the self. A lulling narrative is easy to adopt, but that doesn’t keep you safe from self-doubt. This album is a topical follow-up to Lows, so it felt natural that the visuals would follow suit.

What’s next for Vinnie Guidera and the Dead Birds?
We’ve been talking about it a long time, but we’d really like to play some shows up and down the West Coast, up to Seattle and down to San Diego.

What can people expect at the release show?
There’s a running joke we’ve got with Shotgun Sawyer that we play every show together that we can. Our next three local shows are with them, and the other band, Eugene Ugly, is a band we’ve played with for years. These are some of my favorite bands.

What’s Sacramento’s music scene like for a band like yours?
I’m really proud of what we have as a music community. Not every city has it, so it’s something I’m grateful for and want to participate in so that it continues to thrive. I like how much collaboration there is—bands working together to put together shows that are more of an event than just your average gig.

Join in the celebratory vibes during Vinnie Guidera and the Dead Birds’ official record release show for Shedding on Saturday, Nov. 17, 2018, at Blue Lamp (1400 Alhambra Blvd.). The band will have CDs, vinyl and T-shirts for sale, so bring some extra cash! Opening are Shotgun Sawyer and Eugene Ugly. Show is at 8 p.m., admission is $10 and for those 21 and over. Visit Facebook.com/vinnieguideramusic for more info.