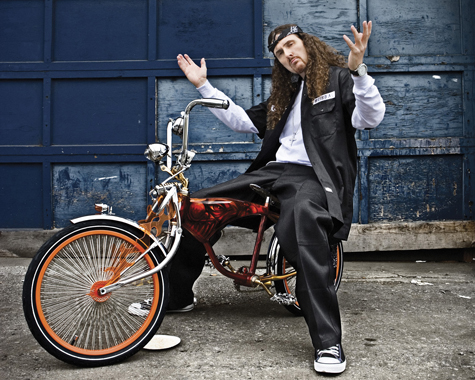 Icons come in all shapes and sizes. They come from all walks of life. And sometimes, they play polka. Though Eminem and Prince may disagree, there are few people who have made as many contributions to pop culture over the past three decades than “Weird Al” Yankovic. Mixing original songs with parodies of popular songs, Yankovic has proven to be as versatile as he is entertaining. Whether he’s playing polka, hip-hop or grunge, Yankovic has the uncanny ability to make people of all ages smile—as long as they have a sense of humor. Currently on the second leg of his tour promoting his most recent album, Straight out of Lynwood, which features his first top 10 single “White & Nerdy.” From his tour bus, parked somewhere in Springfield, Mo., Yankovic shared with Submerge his thoughts on veganism, file sharing and the imminent rise of polka.

I was reading up on you, and I thought that it was pretty neat that even this many years into your career, you’re still experiencing a few firsts. “White & Nerdy” was your first single to break the top 10. Were you tentative about trying rap songs when you first started out?
No, not really. That’s always been a part of my job description. I just make fun of whatever is popular in our contemporary culture, whether that’s rap or pop or rock or polka. Whatever happens to be, that’s what I do. I’ve never been apprehensive about it.

Do you foresee a day when polka will be a pre-eminent in American pop culture?
I think it’s going to happen any week now. I’m just waiting for the planets to line up correctly.

Would you take credit?
I can’t take credit. I’m only the conduit through which polka is coming to our consciousness.

I saw something on your Wikipedia page—which I suppose should be taken with a grain of salt—that struck me as interesting. It said that you started taking accordion lessons when a traveling salesman came to your door offering guitar or accordion lessons and your parents opted for the accordion. Is that true?
That’s actually very true.

How do you think your life would be different if you chose guitar over accordion?
It probably made a difference, because I wouldn’t have stood out as much. I just would’ve been another kid with a guitar, but a geeky kid with an accordion, that gets noticed. I think that’s one of the reasons Dr. Demento started playing my songs on the radio, because he thought it was quite a novelty for this teenage kid with an accordion to be playing songs and thinking he was cool or something. He gave me exposure early on, and that led me to bigger and better things.

With your original compositions, do you compose them at the accordion? What’s your process like for those?
I generally don’t. That’s a good question, by the way. I usually write the polkas on the accordion. For everything else, I have a pretty standard keyboard. Back in the ’80s, I would literally write all my songs on a $30 Toys-R-Us toy piano, because it was handy. I didn’t have a lot of money back then, so I couldn’t afford a nice synthesizer, and mostly, I convinced myself that if it sounded good on a toy piano, it would sound great produced in a 24-track studio. Nowadays, I use a standard keyboard. It’s an older keyboard, but it sounds great. It’s a Kurzweil K2000.

Which comes more naturally for you—the parodies or the originals?
I don’t know if I can say that either one comes naturally. It’s a real effort for me to write. Every once in a great while some idea will strike me spontaneously, but that’s not usually the case. Usually, I have to force myself to write. It’s a lengthy, methodical and oft-times difficult process. It’s a lot easier for me to write parodies, because there’s not as much work involved. It’s more like a puzzle. I’m working within the parameters that someone has already set. I feel closer to the originals, because that’s 100 percent me. It’s hard for me to pick. They both have their pros and cons, and they’re both difficult in their own ways.

This previous album, Straight out of Lynwood, got you two Grammy nominations, including Best Surround Sound Album. What was your reaction to that nomination being that it was for the technical side of things?
I thought that was really cool, because there were some things my engineer and I were just experimenting with. This was the first album we had mixed in 5.1, and we just thought, hey, this seems like the format of the future, or at least a viable format for a while, and we wanted to offer that as something on the DVD. That was also a way for us to combat piracy. I thought if I made the CD package just chock full of extras, that would give people an incentive to actually purchase it instead of downloading it from a peer-to-peer file sharing site. I thought, well, we’ll offer 5.1 mixes of everything as well as all the other stuff. We did put a lot of effort into it, and I thought a lot of the 5.1 mixes were a lot better than the original stereo mixes. The 5.1 version of “Pancreas” is really cool, and to me, that’s the definitive version of that song. But it was very validating to have the Grammy voters actually recognize that. They put me in the same category as Donald Fagan and Alan Parsons [laughs]. It was really cool to be in that small group.

Do you think in the future you’ll write songs with that format in mind?
It certainly opened up different ideas for the mix, but I certainly wouldn’t rewrite the songs for 5.1, but it’s a format I would like to continue to experiment with. Truthfully, if I hadn’t gotten the Grammy nomination, I wouldn’t be considering it for the next album, but since people actually noticed it and paid attention and actually liked it, that’s a good sign that I would mix it again in the future. I’m not sure what format it’ll come out on—the DualDisc format was already dead by the time I released it [laughs]—but I’m sure there’ll be something”¦whether it’s a separate CD and DVD or hypnoball or whatever it’s going to be, I’ll try to deal with it more ahead of the curve next time, hopefully.

Do you think that with the way people are downloading music now, does that put more pressure on artists to put more work into how their albums are packaged i.e. loading them with special features?
I think it does. Certainly, we live in a new world and the record industry has taken some hard knocks, but it’s up to us in the industry to find a new paradigm that works, where we can still stay in business and make a good living and deal with the fact that now a lot of people are sharing files illegally. My personal way of combating that was not to go after people who were infringing on my copyright or try to criminalize anybody, but it was just to offer something that would be difficult to pirate, and offering a product that people would actually want to own. Now other people might go about it different ways [laughs], but that’s how I thought I’d take a shot at it.

Last year, you celebrated your 1000th live show. I was wondering how that felt and if you did anything special for that.
I think we had all the cheese in the deli trays back stage cut into triangles”¦to celebrate.

Any special kind of cheese?
I’m not sure if it was Swiss or American. It was one of the two.

What kind of cheese do you usually have back stage? Is that what you have on your list of demands?
I actually don’t have cheese on my rider. That would be in the band’s dressing room, so you’d have to ask them. The 1000th show felt like the 999th show to tell you the truth, but it was special in its own way.

Most people are cool with you writing parodies of their songs, but there have been a few who haven’t. One I hadn’t heard about before was Paul McCartney, who objected to you changing “Live and Let Die” to “Chicken Pot Pie,” because he’s a vegetarian. But I’ve read that you’re a vegetarian also. Did you bring that up to him when he denied permission?
I don’t know if that would’ve swayed him. People feel the way they feel, and it was obviously important to him for me to not do “Chicken Pot Pie.” I feel bad that that story even got out, because Paul was an incredibly good sport, and I would still love to do a parody of him some way. It was seriously one of the most exciting moments of my life when I got to meet Paul McCartney, and he knew who I was, which just blew my mind. I hate to put him on the same list as people like Prince, who are basically just humorous [laughs]. Paul actually approached me and said, “I’d love for you to do a parody of one of my songs,” but it just so happened that the idea that I picked, he had problems with, and he actually had a reason. You may or may not agree with his logic, but he had a reason, and I have to respect that. I’m just sorry that he got this semi-bad rap, because it’s not his fault.

Have you ever considered going vegan?
Well, yeah, I sort of am. I’m a bad vegan. I’m trying to be vegan, but my wife is not, and it’s just hard on the road. If you’re vegan, and you stop at a truck stop, you have to decide between the applesauce and the toast. I wish phony cheese was more of an option, but unfortunately Domino’s doesn’t really do that. It’s tough. I call myself a vegan but I cheat constantly. 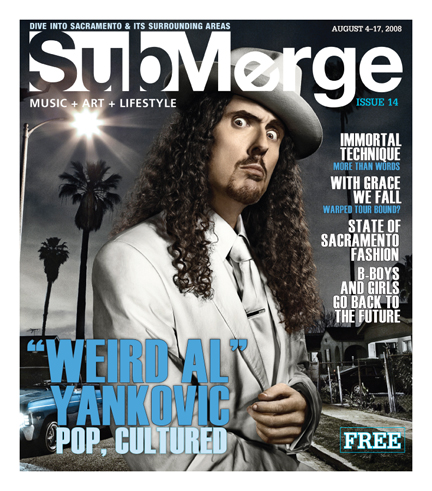