All Across the Grid • Amber Witzke Spreads Sacramento Love 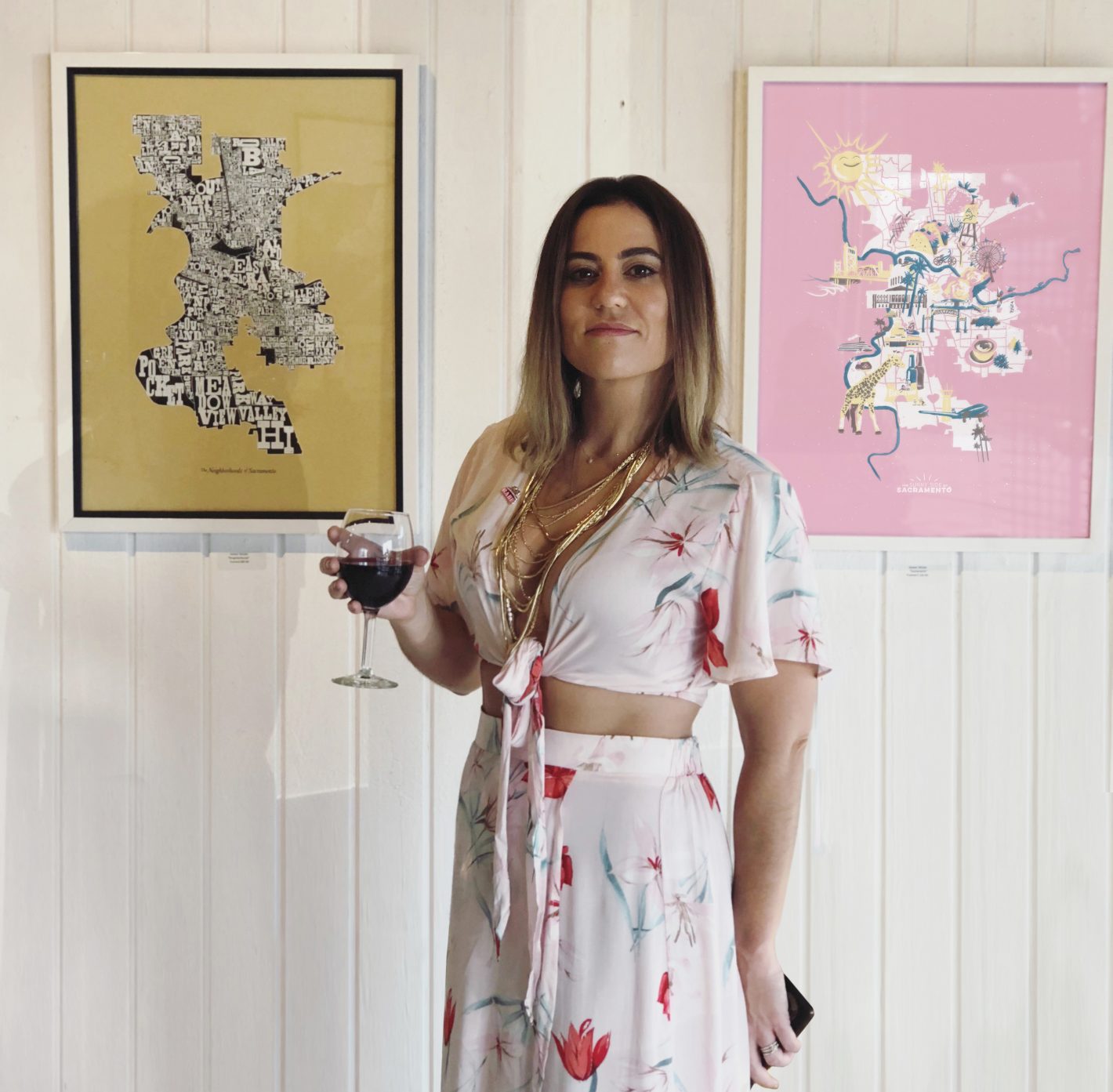 The creative energy in Sacramento is surging. From the diversity in the region’s live music scene to the legacy of innovation and creative vitality among its community of visual and performing artists, the feeling of civic pride is palpable. With creative businesses flourishing, creatives are taking hold of Sacramento and giving its residents reason to celebrate the various neighborhoods that comprise this diverse city.

For graphic designer Amber Witzke, this sentiment of community pride has manifested itself in her latest project: a limited-edition screen-printed poster titled Neighborhoods of Sacramento that memorializes every Sacto ‘hood from Greenbriar to Valley High and everything in between.

And while she was born in Santa Barbara—her family moved to the region when she was 3 years old—suffice it to say, Witzke reps Sacramento hard.

The project’s evolution came out of Witzke’s love for Sacramento and celebrating the 130 neighborhoods that connects all who inhabit the City of Trees. The work is currently being shown at Archival Gallery, where fellow devoted Sacramentans can show their love for the city by scooping up one of her graphic homages to the region. 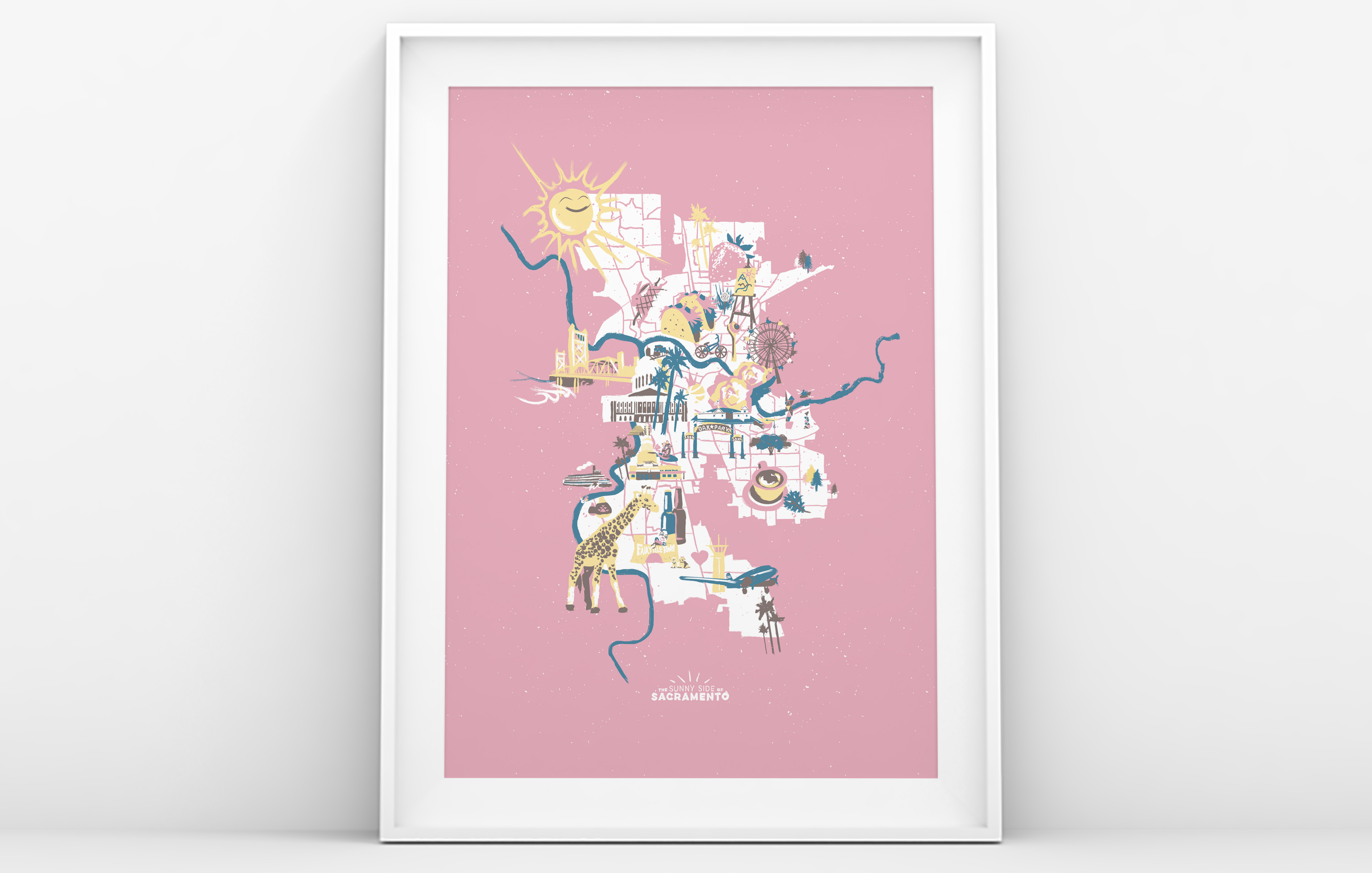 “I grew up in Sacramento and I’ve lived pretty much my entire adult life here, and I have loved the city from the moment I moved down to Midtown,” Witzke gushes. “And recently, my now-husband and I were looking for a home to buy, and I just kind of happened upon all these different neighborhoods and realized how many different areas within Sacramento there are. The actual city itself I didn’t realize had all of these really cool names. Each of these little neighborhoods have their own distinct qualities.”

Born into a family of creatives, the newlywed’s passion for the arts revealed itself early in life, and she was compelled to contribute to the fabric of the local creative space.

“My grandmother is an artist. My mom is an artist. I always loved drawing and painting and anything creative as a child,” Witzke explains. “So, when my dad brought home a computer, it was just like, ‘what can I do with this artistically?’ That’s kind of how I fell into design and advertising.”

This natural curiosity led Witzke to pursue a degree in design from Sacramento State. The intensity of the program she says was vital to her development of discipline as an artist. 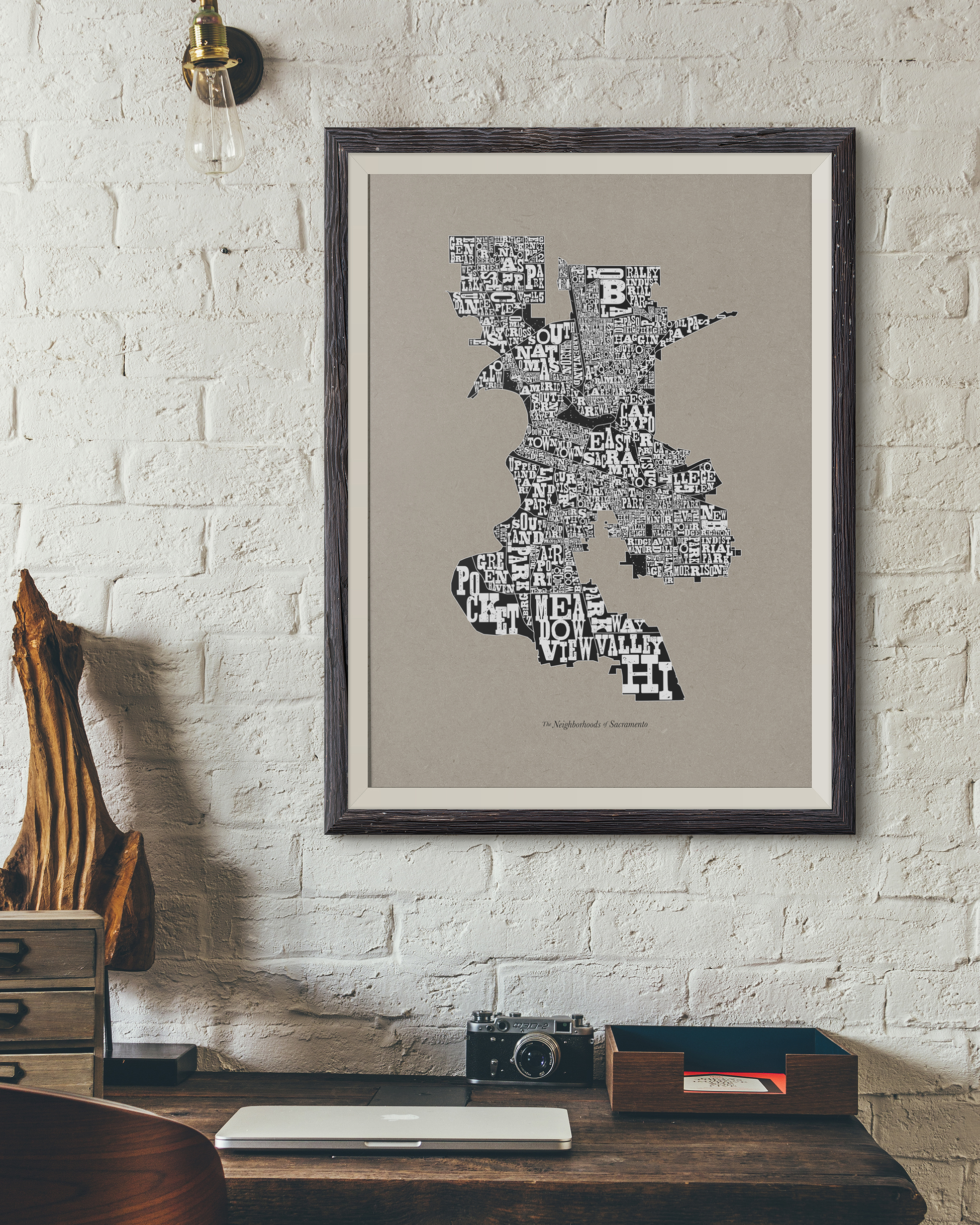 “You had to go through a portfolio review where they would look at your work and see if they thought you had potential,” Witzke continues. “Then, once you got in, they actually did more of a fundamentals program; we didn’t spend any time on a computer—it was color theory and that sort of thing—and you come out of that with a portfolio and you go through another review for them to see if they’ll let you graduate. It was pretty tough, and I’m really glad that [it was], because it teaches you discipline. A lot of people think that as an artist you don’t need to have that, but you really do, especially if you want to create stuff for yourself.”

As the senior art director at Un/common advertising agency, Witzke taps into her creativity on the daily by serving the greater community through television and print ad campaigns for local governments, state administrations, as well as in the private sector.

“I started [at Un/common] about seven years ago,” she explains. “I started as a designer and have moved my way up to art director. There’s definitely a lot of creative freedom that we have, and it’s fun to explore different areas of other people’s business and trying to come up with creative solutions for a lot of public issues.” 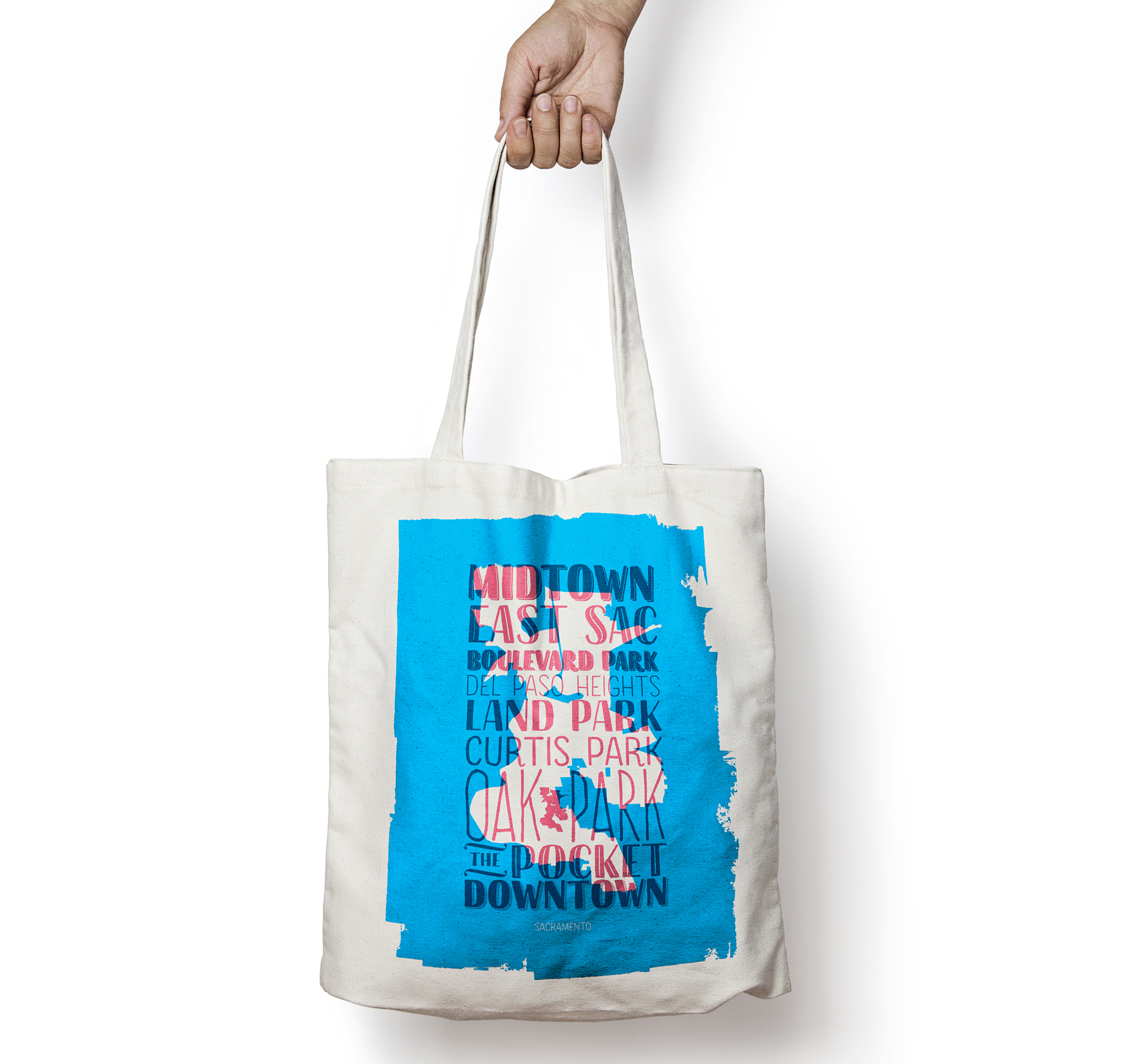 My Type of Town—Sacramento is! Midtown to Downtown tote

Drawing on the vibe of other projects that celebrate neighborhoods in other cities like New York and Paris, Witzke’s black-and-white graphic map homage to Sacramento sprung to life during the course of her wedding planning (in December 2017 to fellow graphic designer Jason Malmberg) when she snuck in time over the course of several long nights spent visualizing and contemplating how best to articulate the diversity within the confines of the River City.

For the Neighborhoods of Sacramento project, while each neighborhood’s moniker leaps to life with a nod to a vintage vibe, the work is thoroughly modern, as each neighborhood is confined to the borders on the official city map—the creativity in fitting in each neighborhood was an exercise in patience and ingenuity. Letters are stretched and fit snugly within the framework of each boundary, evoking an urban feel, fitting for a celebration of the grid and all of Sacramento’s outlying communities.

Initially, the project was offered as a limited-edition run of signed, 18-by-24-inch screen-printed posters, but when the maps leapt off the shelves and quickly sold out with its first run at the ShopCuffs boutique in Midtown and Kicksville Vinyl and Vintage in the WAL Public Market, Witzke was approached by Archival Gallery to show at the space with her Sacto tribute. 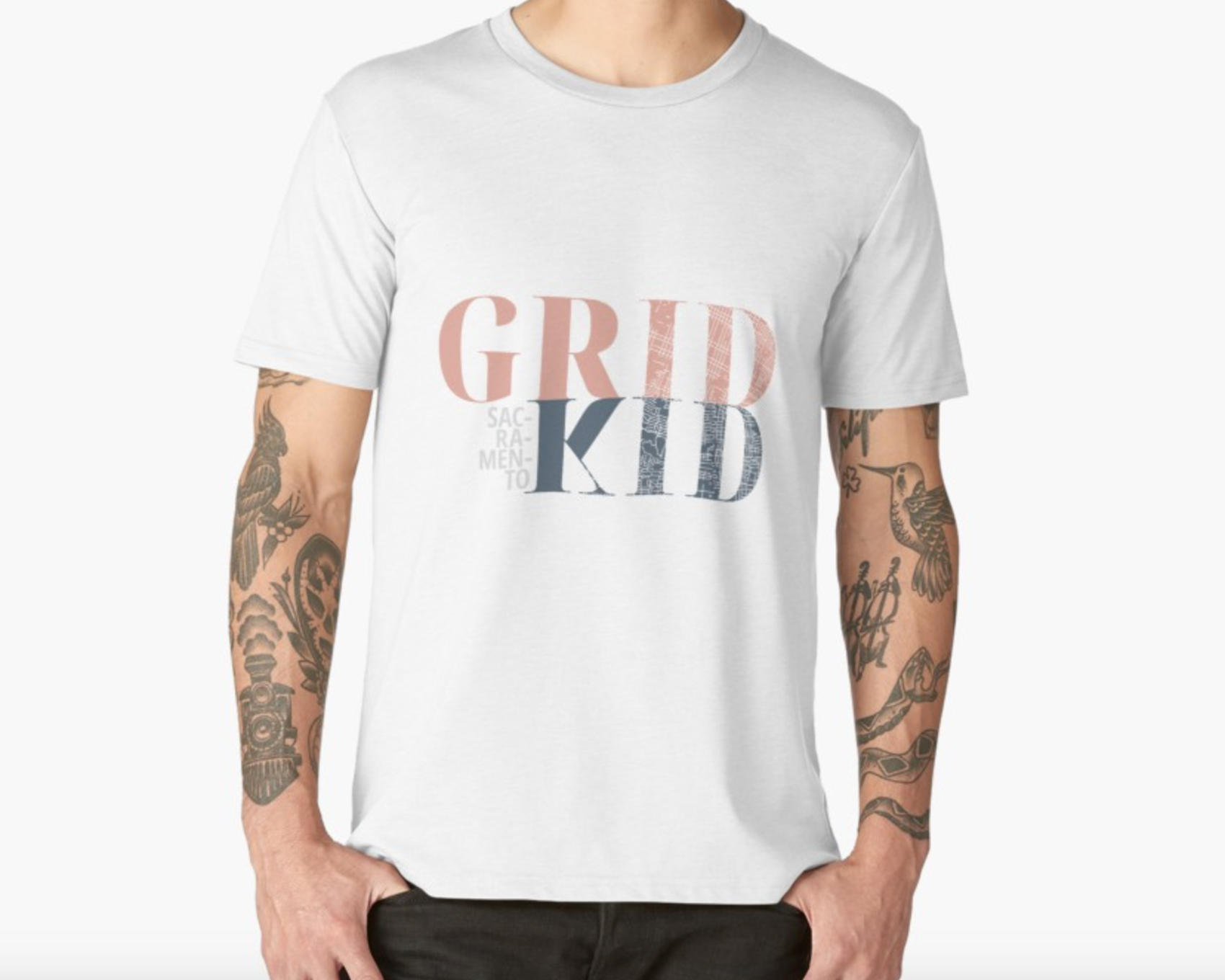 As Witzke looks forward to taking on new projects that boast the unique and diverse community she’s proud to call home, she cites her extensive research on the many communities in the area as that “aha” moment that brought everything together in the Neighborhoods project.

“I’ve been learning a lot about the city, and I’m very proud of our city,” Witzke says. “And it’s nice to see other people now appreciating it like I have for so long. That’s where it started, and it’s continued to grow, and I’m trying to think of other ways to express the amazing diversity and the awesomeness of our city.” 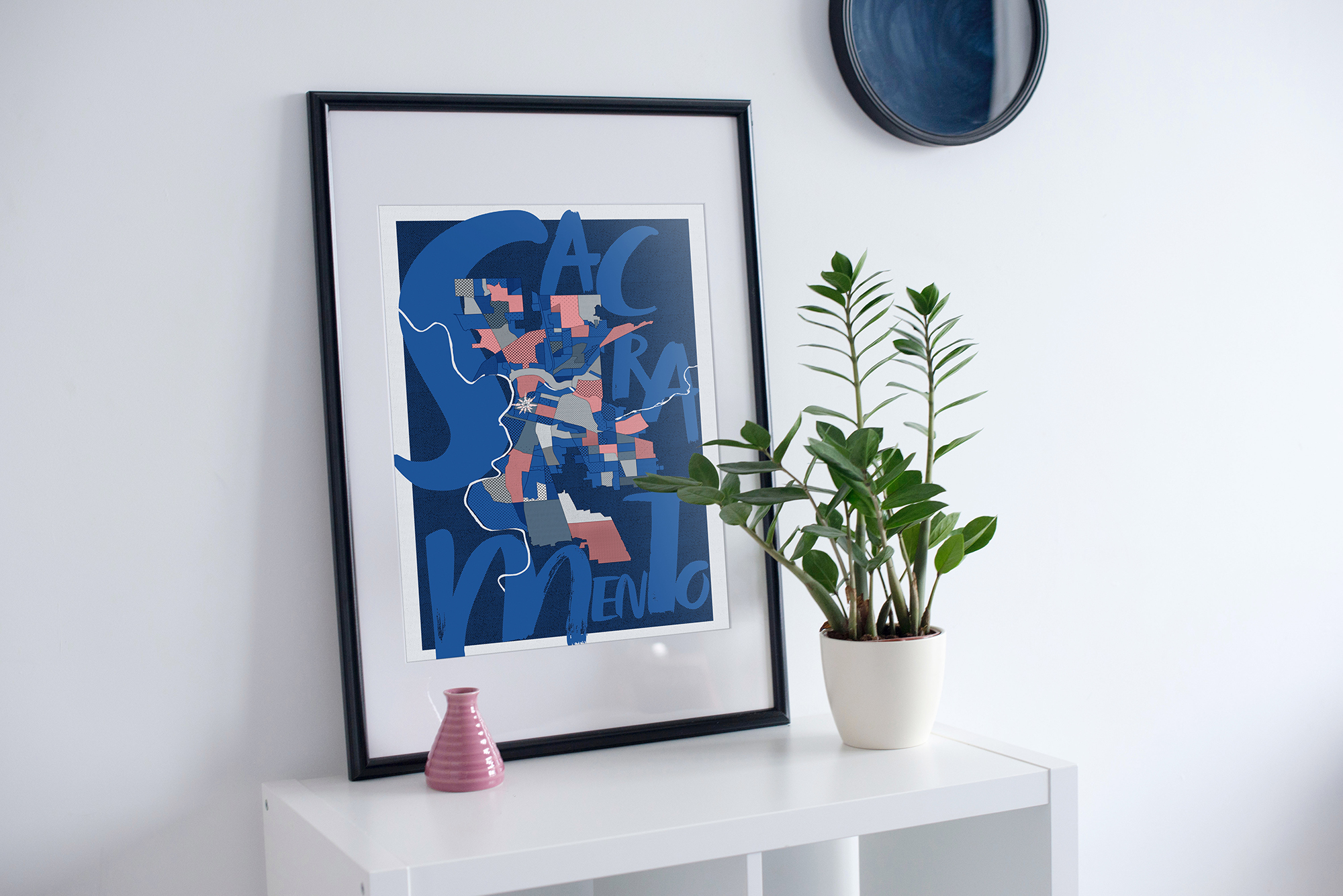 Keep up with Amber Witzke online at Facebook.com/shopamberwitzke, on Instagram @missamberw or on her website, Amberwitzke.com. You can purchase her limited edition screen prints, totes and pins at Amber-witzke.myshopify.com. For her T-shirts and other merch, go to Redbubble.com/people/missamberw. You can also check out Witzke’s work at Archival Gallery (3223 Folsom Blvd., Sacramento) through the end of September.