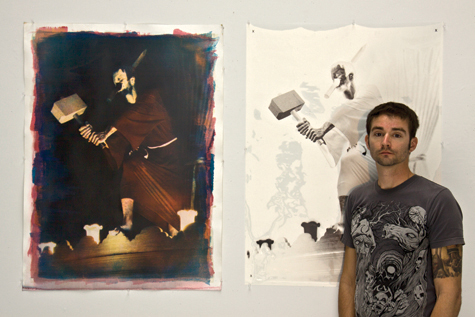 Daniel Herrera’s Vaudeville is the work of true photographic alchemy

In medieval times, the practice of alchemy was based on the belief that base metals could be turned into wondrous things such as gold. It was the process of taking something common and turning it into something spectacular. Alchemy may not have a place in modern science, but the idea behind it certainly can be applicable to the arts. Sacramento photographic artist Daniel Herrera stands as proof of that. His latest series Vaudeville combines in-camera effects, simple plants and roots and a little bit of carpentry, and spins these things into something truly magical.

Herrera began working on Vaudeville in 2009, he says, when he started laying the groundwork for the plot-driven series of photographs. The project was part of his work toward an MFA in photography that he earned this past spring from San Francisco State. He’d earned a BFA in photography from San Jose State back in 2003, but took some time off in-between to focus on making a living.

“I spent a lot of time hustling,” said Herrera of the gap between his bachelor’s and master’s degrees in a recent interview with Submerge. “It’s really difficult to make a living as an artist. I would be doing my work and trying to get into shows. I was working on a loading dock for a number of years, and then I started doing design work for about six years. I worked for an art department and did commercial work.”

Herrera discovered a love for teaching, which brought him back to school to gain his MFA.

“I decided to go back to school to get my MFA so I could do [teaching] as my job-job while I could still do my art,” he said. Herrera currently works as an adjunct professor at American River College and the Art Institute of California, Sacramento.

Herrera said that in the years between his undergraduate and graduate education, he stuck mostly to inkjet printing, but he never lost his love for the dark room.

“I still missed being in the dark room and all the chemicals and mixing up all your own stuff. It’s sort of like being this old-timey alchemist,” he said. “There’s some magic that happens in the dark room that I don’t get from being in front of a computer.

“When I went back to school, I knew I wanted to experiment with the old timey stuff.” 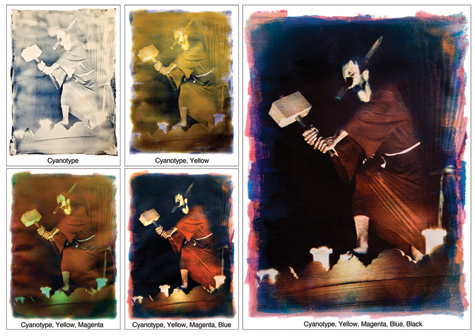 It was this desire to get his hands dirty with perhaps antiquated processes that eventually led to Vaudeville. Though he also employs modern tools such as Photoshop, much of the work in creating these prints comes from a process that was popular in the late 1800s/early 1900s, the time period in which Vaudeville is set. Herrera seemed eager to detail how he made these prints using gum arabic, the base ingredient of watercolor pigment. But quite frankly, the delightfully arcane knowledge he dropped during our phone conversation went right over this interviewer’s head. So, he attempted to break it down in simpler terms.

“It’s like four-color silk-screening almost,” Herrera explained. “I’ll use a blue pigment first, lay it down, and once it’s dry, I’ll re-coat the paper and re-expose it with a different color. Eventually it builds up density and builds up all the colors.”

“You have to soak the paper for a number of hours and wait for it to dry,” he said. “There’s no way to speed that up. If something goes wrong on your third or fourth print, it wastes two days worth of time.”

When asked if it was as difficult as it sounded, the artist joked, “Yes, probably even more so.”

But even before he started actual production on Vaudeville, Herrera was hard at work sketching ideas and creating the story that serves as the series’ backbone. The idea was borne out of the artist’s love for sci-fi and fantasy film narratives, as well as his interest in the history of photography. These ideas merged in a story he created about an alien traveling vaudeville variety show that has made contact with Earth in the early 1900s–a sort of “magical past,” as he referred to it. 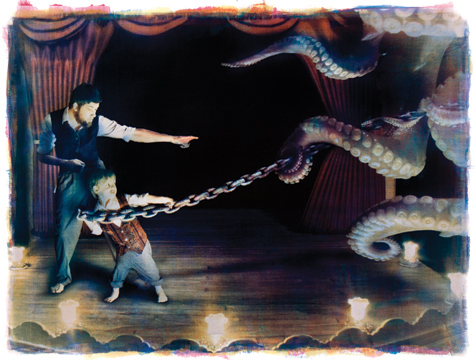 The result is fantastical images such as Continuity, which depicts a man and a young boy, who seems to be wrangling a kraken-like creature from the deep with an oversized chain. Giant tentacles flail stage left as the man and young boy huddle together stage right. Though the image is somewhat surreal, the ideas that spawned it are firmly based in reality.

“The idea of it was just social continuity and what we absorb through society and our parents, and the octopus could be like all the bullshit,” Herrera said.

The image itself was also crafted with real world materials. Herrera himself built the miniature stage on which the action in the photo takes place, cutting and finishing the wood and gluing it into place. He even wired it so it had its own working lighting plot. The stage also serves as the setting for other photos in the series and will be on display at Herrera’s upcoming exhibition, the artist said. As for the tentacles, he snagged them from a local sushi restaurant and photographed them.

Another image in the series, The Carapace, which features a tattooed woman with a wild shock of gnarled hair holding a capsule containing some sort of fetal creature, as trickery laden as it may seem, is actually mostly one shot.

“The only thing that was composited in was her hairpiece,” Herrera said of the piece. “Everything else was one photograph. I built that little container. I think the thing inside it is a potato and some other root vegetables that I’d just glued together and painted pink. That was really cool, because when it was suspended in the tank, it started to shrivel and change quite a bit.”

Though the images he creates in Vaudeville may not realistically portray our physical world, they do have a realness about them. The fact that he built the stage, or used real materials and placed them in unreal situations seems to lend more authenticity to the photographs than if they were solely the creation of computer generated graphics. 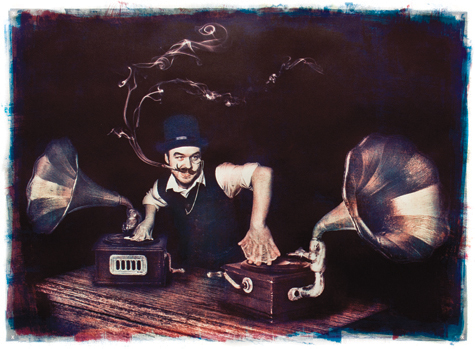 “It’s one of those things that a lot of people do take for granted,” Herrera said. “Once people realize that the things that are in my images actually existed, and it’s not CG or anything like that. I definitely augment things in Photoshop, but I build these things to photograph. I think that changes people’s perception, even if it’s something that they don’t realize when they’re looking at it.”

Herrera informed us that there would be about 10 images on display when Vaudeville opens at the Viewpoint Gallery in Sacramento, but that it was his intention for the series to reach 20 photographs. Each photograph has a story behind it, and when the series is finished, he hopes to collect his writings and compile them with the photographs into a book. In the meantime, the best way to see this strange intergalactic circus will be live, in the flesh. 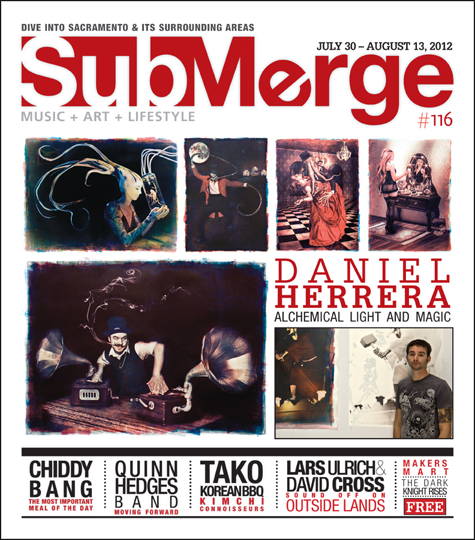 Daniel Herrera’s Vaudeville will be on display at Viewpoint Gallery in Sacramento starting Aug. 8, 2012 and running through Sept. 1, 2012. An artist reception will take place on Aug. 10, 2012 at 5:30 p.m., with a Second Saturday reception the next day, also starting at 5:30 p.m. For more info, go to https://www.viewpointgallery.org/, or visit Herrera on the Web at http://danherrerastudio.com/