Visitors who want to get as much out of the David Ligare exhibit at the Crocker Art Museum as possible may want to approach the artist’s pieces with a notebook and possibly a Greco-Roman history book in hand.

It’s easy to float through the exhibit mesmerized by the 70-year-old Classicist’s beautiful symmetry, seascapes and elegance. His home on California’s Central Coast and his travels of the Mediterranean have inspired some of the most beautiful watercolors and oil paintings of the balance of water and land to depict life and death, chaos and calm, shadows and light, that you leave feeling serene. But that’s not all that Ligare wishes—of art lovers or of humans in general.

He sees his work as a “social project,” a push for the viewer to dig deeper into the Greco-Roman stories, landscapes, architecture and mythology from which he finds inspiration, and see how to apply this knowledge to modern life the way he offers modern narratives and twists.

Those serene images of white drapes flying above the Pacific? They are inspired by the alabaster Greek statues that have long lost their limbs and heads and of which only draped clothing remains. 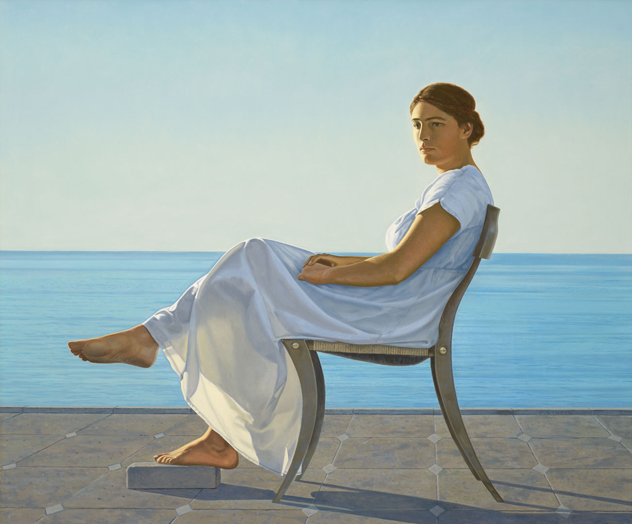 “It is often said that art should reflect our time, but it can reflect other times, and we can learn from history,” he explains. “When I began making narrative paintings I didn’t know anything about Classicism at all. I didn’t know these stories or myths, so I just started reading. It was just wonderful to do. It was so incredible to be completely submersed in these ideas that are so rich and so surprising.”

Ligare read the great philosophers of that ancient time and was amazed with the depth of knowledge they and others discovered, whether it was being able to measure the distance to places in the solar system or setting up a democracy.

“It’s the fact that somebody like Lucretius could understand that we are made up of atoms, and we’re talking about first century B.C. there,” he exclaims. “It’s just a crazy idea somebody would have without all the microscopes and modern technology. They were measuring the distance to the moon and the circumference of the Earth. And it wasn’t just ancient Greeks and Romans but other ancient societies like the Egyptians. They were inspired to think, and maybe that’s the key right there—inspiration. Any group of people, no matter what ethnicity or location, has the potential for doing really extraordinary things. It could be fifth century Athens or 15th century Florence,” but he notes that there was leadership that inspired thinking. 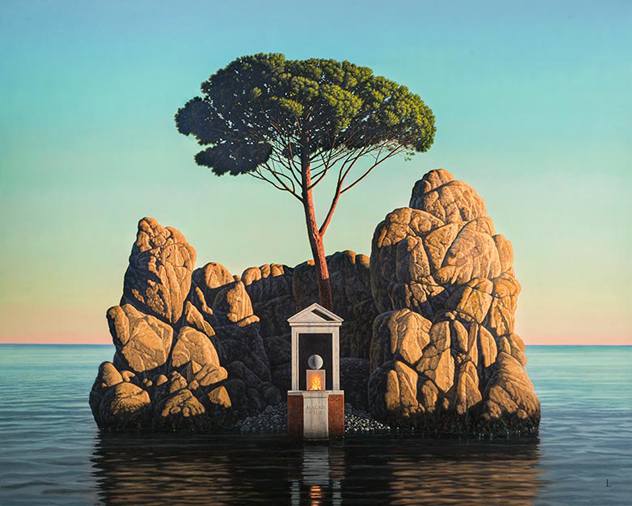 Ligare doesn’t necessarily call himself a leader, but his belief that the central purpose of art is to inspire does then call on artists to lead in some way. He also specifically believes that the function of art and culture is to fulfill a social need, and viewers will realize that his art fulfills that need by depicting equality, the struggles of the homeless and the sick and the ideal that all things and beings can live harmoniously together.

“There’s a passion for knowledge we don’t really have right now and I would like to see that, to inspire people to want to learn, about everything,” Ligare says.

Education is how Ligare became an artist in Classicism in the first place.

“I thought it was important to begin exploring the origins of some of the ideas we were dealing with,” he says. “For instance, with homelessness, [it was important to me] to learn about what the Greeks felt about hospitality, or Romans, and what some of the underlying concepts were there and one of the concepts I’ve used most is ‘symmetria’—the idea of symmetry.”

Some of Ligare’s paintings at the exhibit depict this concept, which came from his research of Polykleitos and the harmonious integration of the disparate parts of the human body.

These paintings show the diversity of society and things in nature and how they fit together in a harmonious way. 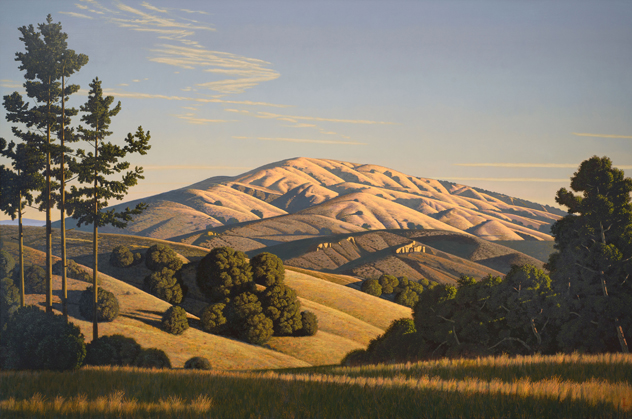 “That is such an important ideal in modern society that I think it’s important to date back historically,” he says.

Ligare says his concepts sometimes become very esoteric, but that’s where the fun is for him. His massive, attention-stealing painting Arete, for example, is a naked black man on a white horse, and caused many museum visitors to pause and stare.

The layers behind the painting bring much perspective. Arete in Greek has to do with the idea of excellence of the human spirit. The quote scrawled below the horse comes from a fifth century B.C. poem written about an athletic event, and Ligare wanted that athletic excellence idea to carry over to excellence in knowledge. His reason for using a black man also has to do with the two kinds of ceramic pots used in Ancient Greece, in which earlier pots were black figure vases, and the poet he references in the painting came from that period.

“For me, all of these paintings are so wrapped up in ideas and it’s difficult to boil them down to just a few words. But in that case I wanted it to be a man who had a great amount of integrity about him and carried himself as an excellent human,” he says. 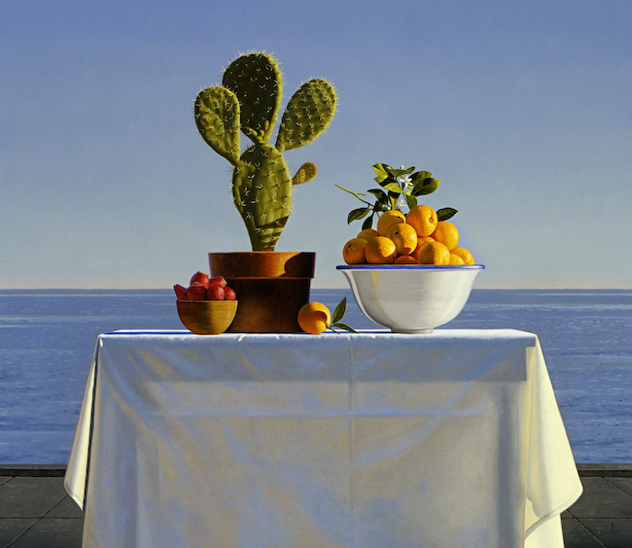 Ligare’s latest pieces hang at the very beginning of the exhibit before entering the room, and focus on architecture. The artist—who used to teach drawing at architecture schools in Wales and at Notre Dame—also finds great inspiration from past and current architects, especially the New Urbanists.

Ligare doesn’t limit himself within a painting to a certain time period or place, which adds yet another dimension to each piece.

“One of the things I really like doing with all this stuff is being flexible and fluid in time; being comfortable with moving from 18th century to 17th through the Renaissance to even beyond to cave paintings in the neolithic era, and not be fixed to contemporary ideas or contemporary culture,” he notes.

That fixation to what might be acceptable in a specific place or time frame is something Ligare continues to rebel. It’s almost epitomized in one of his pieces—Ligare painted a male diving into a sea to show the balance of opposing forces of order and chaos, something he says he’s put into his work for the last 35 years. The painting of the diver was influenced by a tomb in southern Italy, which he says was likely not belonging to a diver, but was a representation of a person moving from air to water and from life into death. The painting is based off a photograph of Ligare as well, diving into the Aegean Sea. 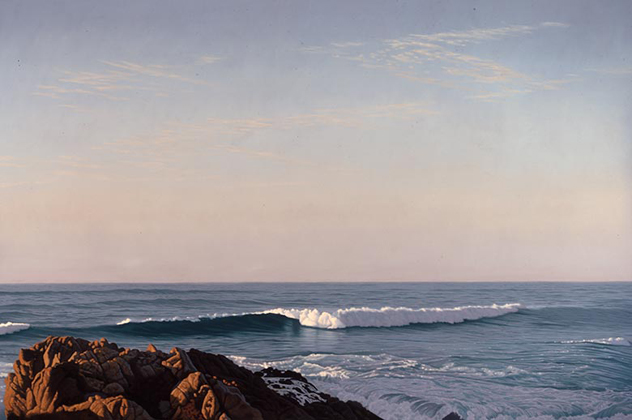 Ligare said he couldn’t help but laugh and include a new angle to the diver story when he found out that the main painting on large billboards advertising his exhibit in Gdansk, Poland, was the nude male diver. However, when he mentioned this to the Crocker, they didn’t seem to agree with the use of the painting for public advertisement.

You can see the infamous diver and dozens of other equally intriguing, educational works from Ligare at the Crocker Art Museum through Sept. 20.

David Ligare, California Classicist is on display now through Sept. 20 at the Crocker Art museum, located at 216 O Street in Sacramento. You can find hours of operation, as well as purchase admission tickets, through Crockerartmuseum.org.