With the fast-paced foot and vehicle traffic constantly buzzing down J Street and an estimated 5,000 Sacramentans with Celiac disease, it’s no surprise that the Gluten Free Specialty Market just celebrated their five-year anniversary. But the store caters not only to those seeking gluten-free foods, according to co-owner Melanie Weir.

“Our goal is to help provide you with the things that make you thrive,” says Weir. “We cater to all kinds of allergens, all kinds of specialty diets, modifications—anything that people need, we look at.”

The store began as a Web-only idea, operating out of a small rented room in a neurology clinic. According to Weir, many who were seeking gluten-free nourishment out of desperation would stop by, inquiring if she was in fact a fully operating grocery store. At the time, she was not. But in five years, Gluten Free Specialty grew from carrying fewer than 60 items to packing over 9,000 options into the 1700-square-foot space at their current location (2612 J Street).

Prior to opening Gluten Free, Weir, who is severely allergic to gluten and has followed a gluten-free diet for the last 12 years, noticed that gluten-free items in everyday grocery stores were scarce to nonexistent; either expired and dusty, or buried and forgotten about under the more mainstream foods. But what made her situation even worse was when hunger struck, gluten-free choices were stored next to foods and areas containing gluten, ultimately making her already limited options contaminated and inedible.

“There wasn’t access to quality foods. Foods weren’t being taken care of properly,” says Weir. “You’d have to dust off the gluten-free products to actually see how long it had been sitting on the shelf. Everything was stale or crushed up and you were lucky if you even got it.”

“It only takes one bread crumb with someone with celiac disease to go into an auto-immune reaction for up to six months,” says Weir. “It’s a really serious thing. It’s not like, ‘I’m not going to eat gluten because it’s a fad.’ With celiac disease, you have two pairs of sympathetic nervous systems that turn on; and the systems, as they activate, can create all kinds of things like cancer and inflammation. Basically, all things that eventually lead to death and degeneration of the body.”

Knowing the logistics of gluten and the potential harm it can cause to those allergic is something naturopathic doctor Dennis Godby specializes in. Godby’s practice operates out of Sacramento Naturopathic Medical Center, which happens to be neighbor to the market, only a few doors down. The goal of his establishment is to care for all patients with natural remedies including herbal, vitamin and mineral treatments. 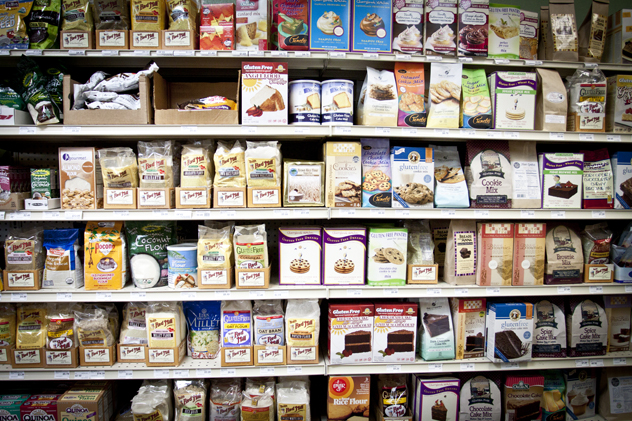 “Wheat has 50 percent more gluten than it did 30 years ago. Gluten is a very serious thing,” says Godby. “[Eating a gluten-free diet] is a trend, but it’s not a fad. It’s a trend because people are finding out the truth. Most people aren’t doing it for fashion; people are doing it to see if they feel better if they take gluten out of their diet. Part of the reason Gluten Free Specialty Market has gotten so popular is because people want to have options. Because for some people, [gluten] is like a toxin, literally like a poison.”

Gluten is found in the protein of wheat, rye and barley and is also cross-contaminated in most oats. According to Weir, the safety of oats is still a questionable thing for those with celiac disease. She adds that just about any packaged food on the market from 10 years ago to date contains gluten.

“Basically, not just pasta, bread and rice, but if it’s made in a factory and that flour dust is in the air, anything that’s made in that factory has gluten in it,” says Weir. “It could be in green beans, it could be in your peanut butter. There are so many elements.”

Registered dietitian Jo Miller explains there are close to 5,000 people in Sacramento with celiac disease, a condition where the body attacks gluten as a foreign invader. For those living with the disease, a gluten-free diet is the only way to ensure good health.

“Having a resource like the Gluten Free Specialty Market is an asset for the daily challenge of meal planning,” she says.

Eventually, Weir’s goal is to incorporate a gluten-free kitchen, which she projects will happen over the next several years. In addition, she’d like to expand the store’s square footage for more storage, office space and room for extra gluten-free goodies. And don’t fret, if the store doesn’t carry an item, just ask Weir or one of the staff on shift. Not only will they will take note, but also look into ordering it.

“Basically we started with a notebook and 60 products. When people walked into the store we wrote down what they asked for. To this day, we keep track of what people want,” she says. “This really is the heart of the community store,” she continues. “The products here are the icing on the cake and allow for a little more excitement. It’s fun to bring in something new, like a blood orange olive oil or a lemon butter; because when you have multiple allergies, a lot of times you lose that creativity in the kitchen. This store is really designed to maintain creativity for people who have food allergies.”