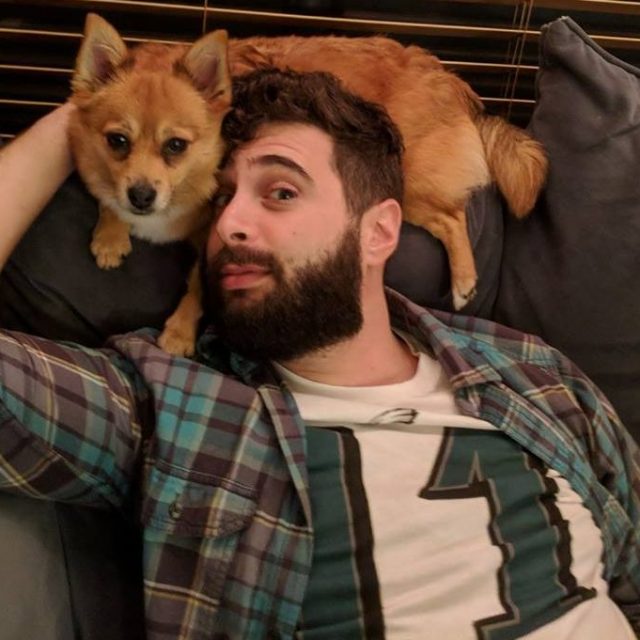 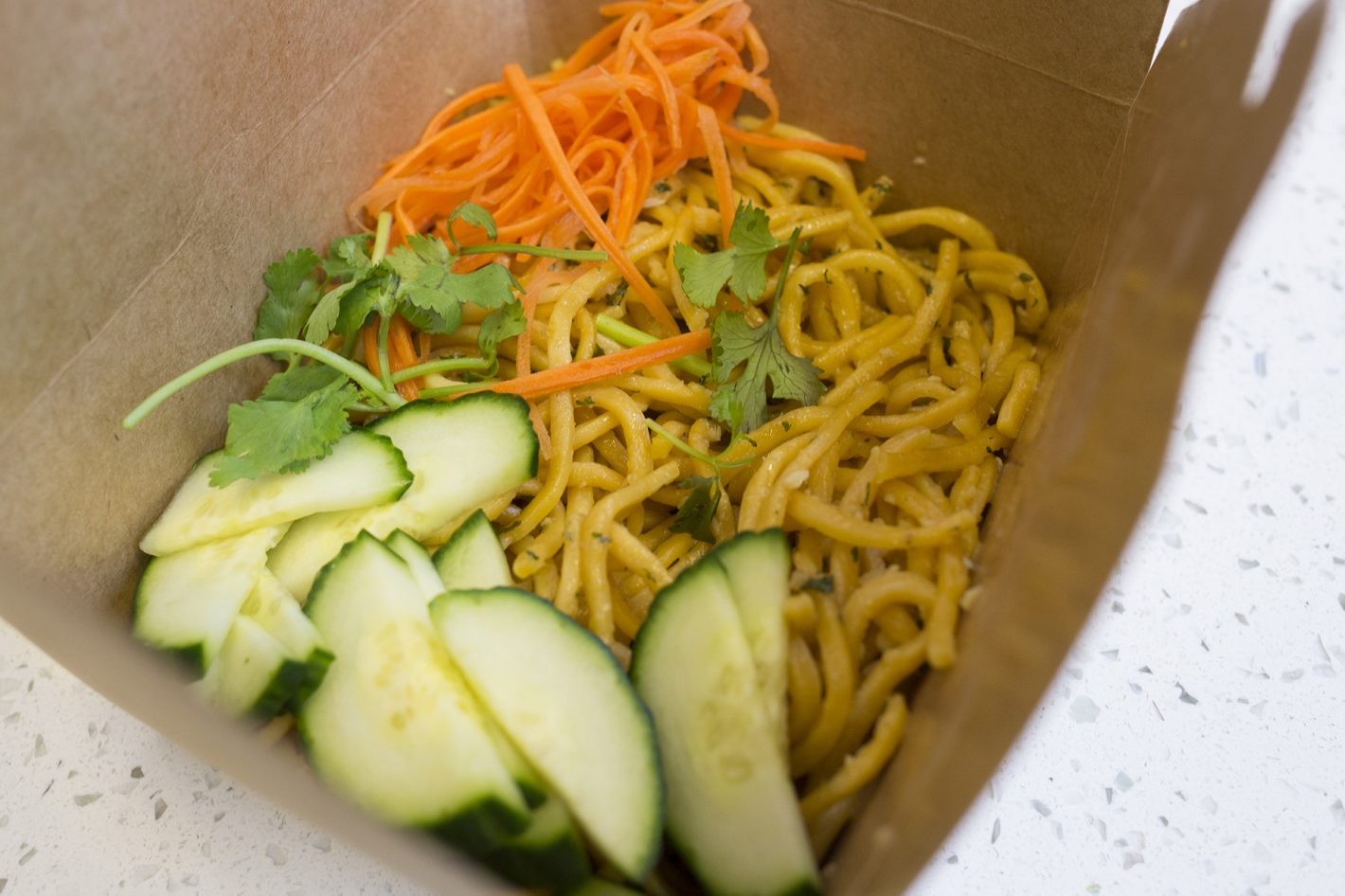 Pearl Milk Tea originated in Taiwan in the 1980s and soon spread like wildfire throughout the world, probably because it’s just so damn delightful. You may know this beverage as bubble tea, or boba, which features balls of tapioca with a texture like that first chew of bubble gum, but with the lasting flavor of whatever milk tea they’re swimming in. That’s up to you. Everything is up to you! The milk. The tea. If you want to shake things up, you could also add grass jelly—little ribbons of joy, like gummy worms that don’t stick to your teeth. You should probably stop there, but you could also try adding red beans, mochi, aloe or whatever you’re in the mood to suck through a fat straw.

When I spent a month in Taiwan, there was a boba stand on seemingly every street corner, sometimes right next to or across the street from each other like Starbucks in the United States. Starbucks—or any coffee—was difficult to find.

Boba might have won the turf war in Taiwan, but here in the United States, it’s still a struggle. Google “Sacramento boba,” and you’ll only return about a dozen results. Google “Sacramento Starbucks” and a little animated paperclip will pop up and say, “It looks like you’re writing a blog. Just go outside and look around.” 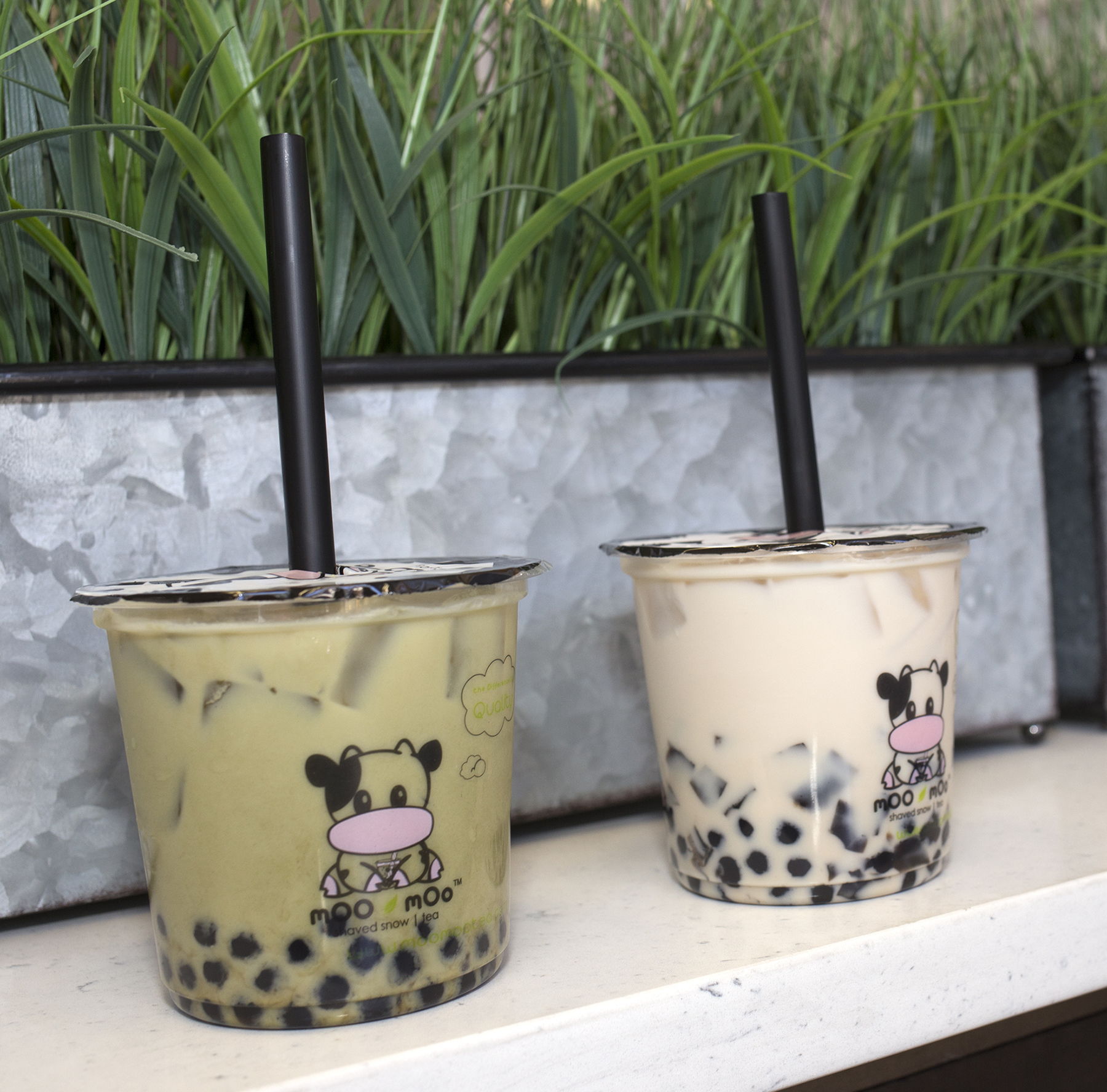 Ask the owner of Nubo and Moo Moo, a mom-and-pop boba shop/Vietnamese restaurant that was recently forced out of their Elk Grove home by their unfriendly neighbors, Starbucks. An exclusivity clause in Starbucks’ lease with Calvine Crossings, the shopping center Nubo and Starbucks shared, specified that no nearby stores could sell coffee or tea in to-go cups.

Andy Ha, Nubo and Moo Moo’s proprietor, found it increasingly difficult to do business after that, losing more than 40 percent of his revenue. He retained a lawyer, but the coffee chain held firm behind its legal standing, despite the fact that Starbucks does not even serve bubble tea.

Forced to capitulate, Ha packed his boba and left.

Nubo and Moo Moo now sits tucked away in a little strip mall off of Folsom Boulevard in East Sacramento. Directly across from them, their new neighbors, Jamba Juice, have so far found the arrangement of selling different kinds of drinks in the same area to be copacetic.

There is a sign for Nubo, and a sign for Moo Moo, depending on which side of the corner you find yourself on. But there’s just one roof, and one counter to order from, no matter which sign you walked in under. There’s wide open seating and board games to play if you get bored waiting on your food. 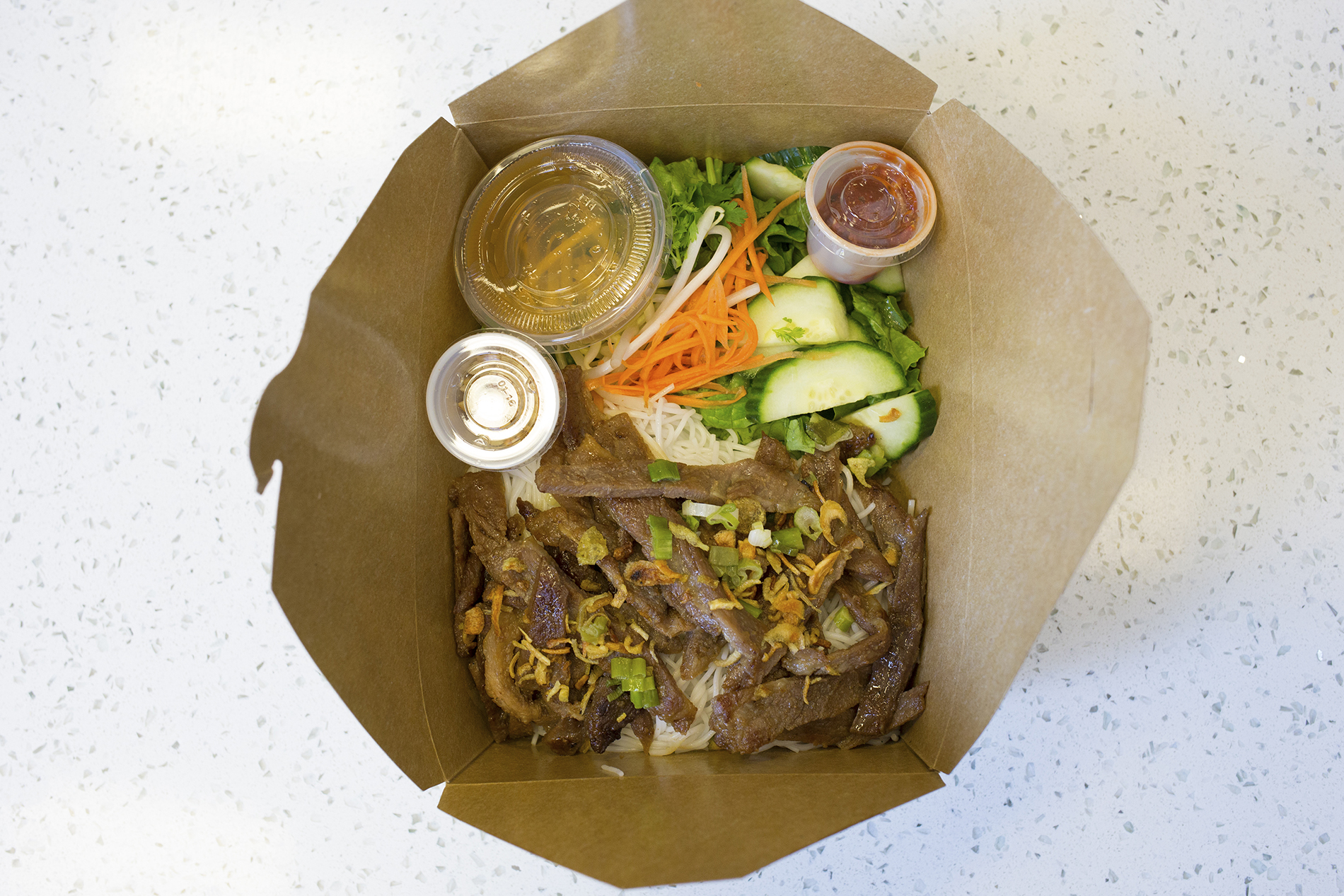 Moo Moo & Nubo is a food and bubble tea restaurant that is located at 6350 Folsom Blvd. in Sacramento, California.

The Nubo menu offers simple Vietnamese dishes like noodles, the kind of bowl you could see President Obama and Anthony Bourdain sitting down to had they filmed an episode of Parts Unknown in Sacramento.

I ate with our photographer, who despite never having been president was still solid company. Nine to 12 bucks gets you a serving of food in a box, by far my favorite container to eat out of. Choose between vermicelli noodles or rice, and then between shrimp, beef, chicken, pork or vegetarian, and then between fork, chopsticks or eating with your hands. Plus a side salad. If you’re dining alone, go with the garlic noodles, offered with the same options.

After learning they were out of shrimp, I opted for the vermicelli noodles and pork, but then I tried to trick them by ordering the shrimp spring rolls as an appetizer. No luck. They were still out of shrimp, but they gave us vegetarian spring rolls at a discount, my favorite kind of pricing. All in all, a healthy, quick meal option for $10 is always a winner.

But I was still hungry, so I put on my mustache-and-glasses disguise and headed back to the same counter for dessert, where the mile-long Moo Moo menu gave me a chance to digest while I pondered their many options. They offer a dozen or so yogurt-based “Signature Drinks,” slushies, ice cream, mocha, iced tea and coffee (suck it, Starbucks!), but I was there for that sweet, sweet boba. You can choose between powdered milk tea or fresh, an option that not every boba joint offers, plus they give you the choice to go with or without sweetener—also not as prevalent a choice as it should be. I went with the dark roasted oolong milk tea (gimme that caffeine, baby!), pointed two fingers randomly at the myriad mix-in list and landed on grass jelly and bursting boba. The choose-your-own-adventure-style dessert sent me to a new page where there were a full five flavors of bursting boba. I went with lychee and resolved that it would be my last decision of the day.

Oh, and the best part of all? No “grande.” No “venti.” Just say you want a damn large, and walk away holding a big-ass cup. It’s your world now. 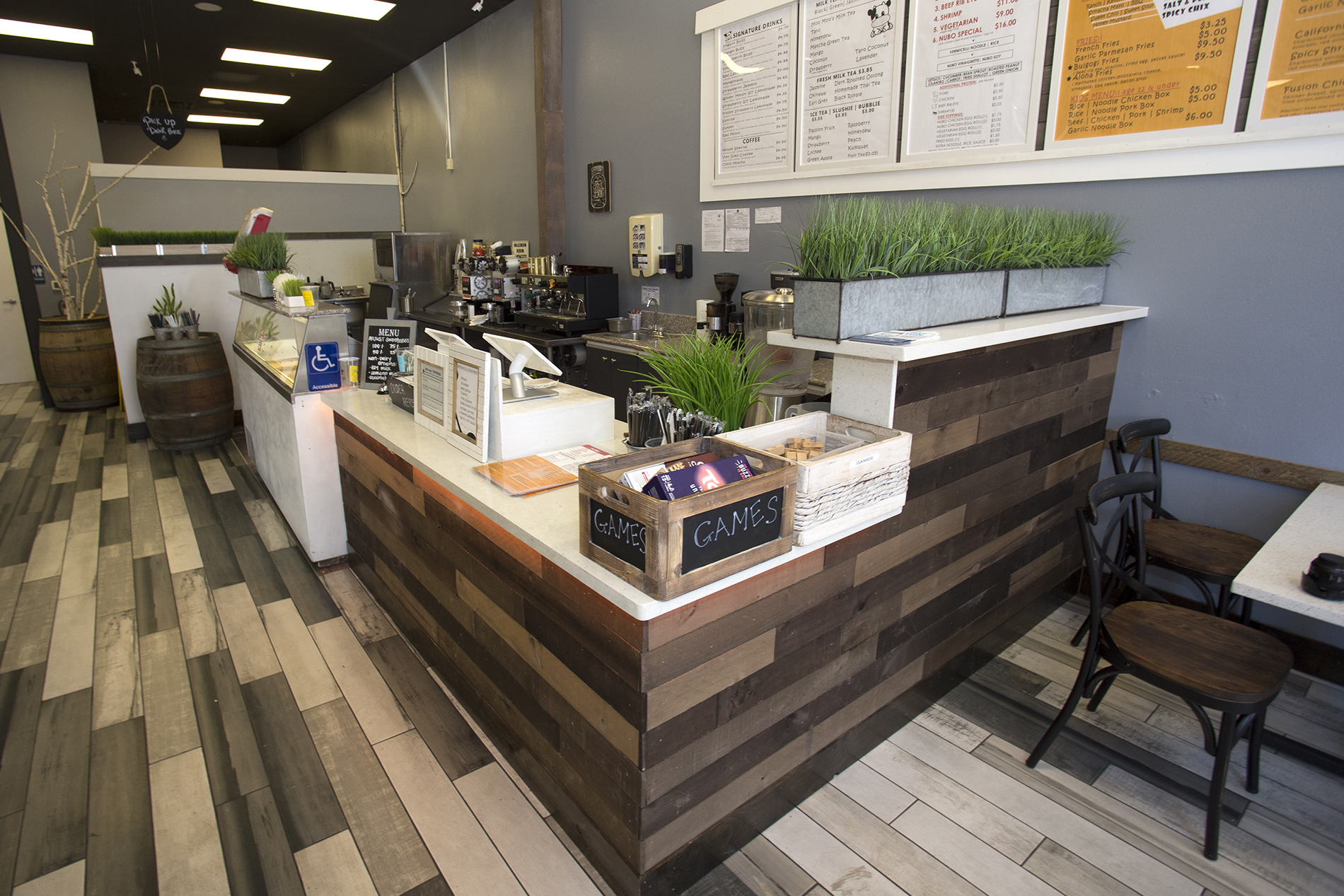