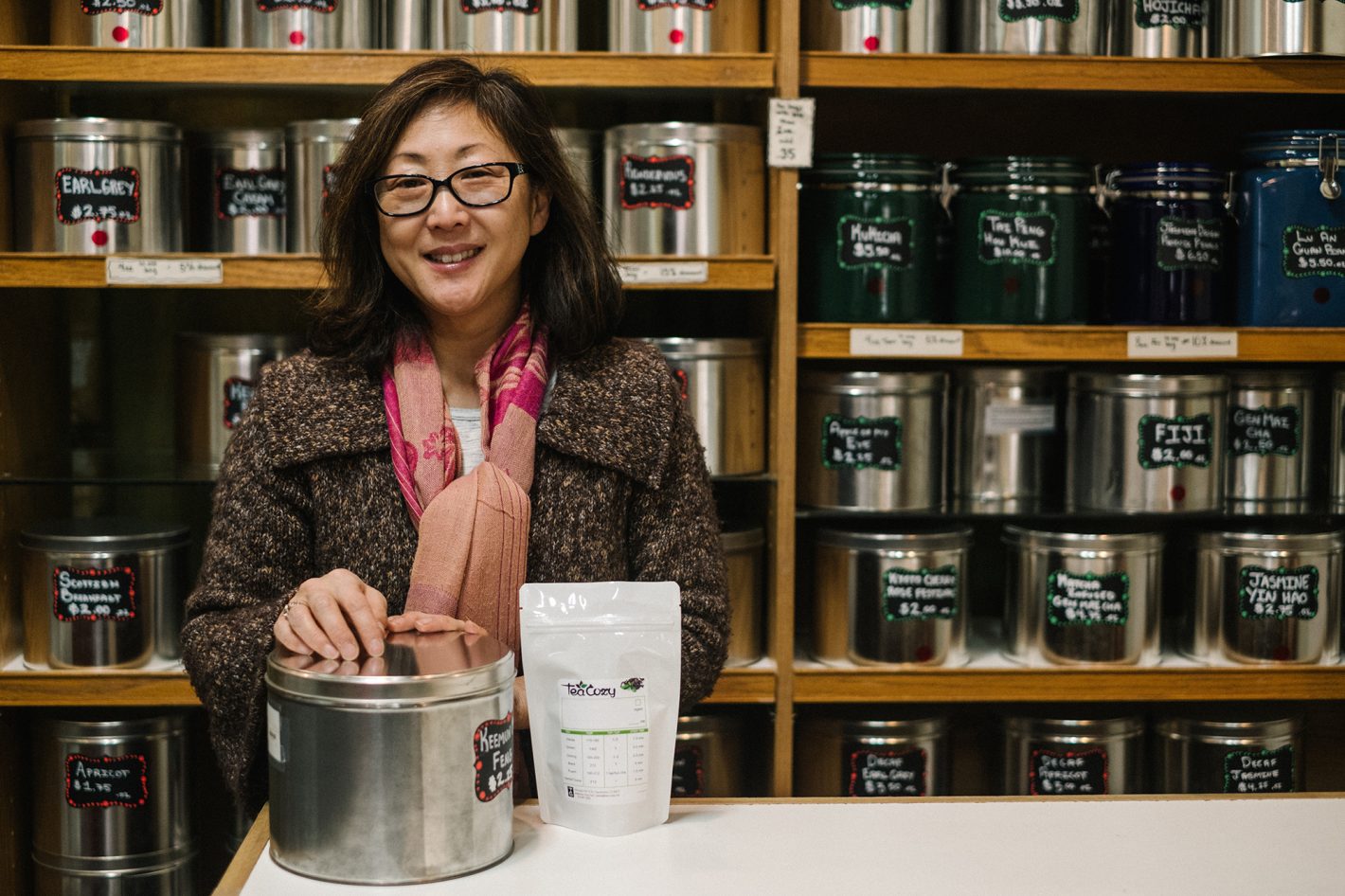 Tea is the most consumed beverage in the world after water, yet in the United States, we have only recently considered tea plant terroir like we do with wine grapes, scrutinized leaf freshness like hops or considered tea-food pairings for a party.

Wait, you don’t do that with your tea?

If you have tea FOMO, don’t run out and buy a bunch of tea plants (Camellia sinensis) just yet. The Sacramento region is not ideal for tea production without significant investment (look up tea expert Roy Fong, who has spent years and more than $1 million in Esparto, Yolo County, to start one of the only two known tea farms in California).

Perhaps a better introduction to all things tea would be to pay a visit to Nami Thompson, who has owned Tea Cozy with her husband Mike for 20 years. Located just inside Arthouse at 1021 R St. (next to Fox and Goose), Tea Cozy provides several dozen fresh, globally sourced loose leaf teas, as well as knowledgeable staff in a calm, jolly space lined with tea accessories—anything from Anglophile goodies like lemon curd and shepherd’s pie spice mix, to Chinese serving sets.

Thompson’s idea for Tea Cozy came from time spent with her British mother-in-law, who at the time was suffering from cancer and was the reason the couple left Washington State to settle in Sacramento in 1998. Prior to the move, Nami was a product developer/designer for major companies like Eddie Bauer, and Mike worked as a civil engineer.

“We quit our jobs without having jobs here and moved to Sacramento,” Thompson says as she pours a deep, beautiful, ruby herbal tea of her own concoction called Moulin Rouge (dried elderberry, raisin and hibiscus) into tiny white teacups. “My husband said I should start my own business because of my background. At that time, I read about old tea rooms closing in Los Angeles, and I thought, ‘I love that idea.’ My husband’s mother was from England and she introduced me to tea with milk and biscuits, and I liked that tea time was intergenerational; I liked the idea of kids and older people sitting and talking together.”

Interviews with women who owned and operated tea rooms in the Sacramento region helped Thompson realize a restaurant wasn’t her cup of … well, you know. These entrepreneurs woke early to prep kitchens, cook, clean, set up shop, handle employees and much more. Advice from her banker brother that a tea room wouldn’t turn tables fast enough for a profit also worried her.

“We liked tea, but didn’t know anything about tea,” Thompson says of the shop idea. “The knowledge would come along the way. So I started the tea shop with the tea I would have with my mother-in-law.”

Thompson attended the annual World Tea Expo to get more exposure, and joined tea associations and mailing lists, getting samples and choosing which to sell in the shop, which at the time was much smaller in the back of the building where the freight elevator was located.

Over the last 20 years, Thompson and her employees have sat with top tea experts and distributors from around the world to learn and bring knowledge back to their corner of Sacramento. Aside from the historical and cultural education, Thompson says she always listens to what flavors her customers want.

“I know everyone says this, but I feel like I have the best customers,” she says with a big smile. Indeed, nearly every customer who walks in during our interview she knows by name, and they each stop to chat about their latest purchase.

Though Thompson is not a tea sommelier (she says they do exist), her palate has developed over these last few decades in a way that she can tell subtle differences in teas, knows the right way to brew each kind and has a knack for unique blends and flavors that customers may request.

“The water that you’re using, the amount [of tea] you’re using, the temperature of the water, how long you steep the tea, when you pick the leaf and if you pick on time … it all makes a difference,” Thompson says. “If the leaf looks really dry and brittle and can look dusty, then you won’t have as much flavor.”

Thompson notes that now some of the big tea bag companies will put dates on the boxes sold at the grocery stores, and that the quality has gotten better.

Flavor profiles are very important to Thompson. She says that the shop staff tries to always use natural ingredients to meet flavor needs. For example, Thompson works with a company that does freeze-dried fruit that has a cut that is finer to get the flavor into the tea. Thompson purchased blueberries from the company and is working on a flavored tea.

Tea Cozy has a unique, smoky Earl Grey, a tea called Purple Rain that brews purple, as well as a custom Moroccan Mint blend. They also provide specialty orders to Sacramento businesses Tapa the World, the Kitchen (for cooking with teas) and Bottle and Barlow for creative tea cocktails.

The possibilities for food and drink uses and for new ways of serving tea seem endless to Thompson. The market, she reports, has yet to pick up on tea the same way it’s done with craft beer and wine.

“When we went to talk to our oolong distributor recently, he said there are trends in ready-to-drink teas that you could serve in wine glasses and people can sip and still participate in parties without seeming like a party pooper,” Thompson says. “At the last tea expo, we did a cheese and tea pairing, and tea affects the creaminess of the cheese. The idea is that people put milk in their tea, so why not pair it.”

The idea is not farfetched in many parts of the world; in Mediterranean and Eastern European cuisine, pairing a sweet or herbal tea with baked cheese dishes is common.

Thompson notes she actually prefers plain and simple teas so that she can then pair them with her meals or desserts (she drinks five cups a day, preferably with food).

The options seem endless, but what are the benefits? Why replace tea with water in your cooking? Why opt for tea over a Track 7 brewski?

For 3,000 years, the Asian cultures where tea originated have claimed myriad medicinal benefits to tea drinking. According to the UC Davis Global Tea Initiative for the Study of Tea Culture and Science, the National Institutes of Health has “identified a need for more research into tea’s anti-carcinogenic potential,” and the possibility of “improving cardiovascular health and mental acuity, but no health claims have yet received U.S. government approval.”

Of course, economic benefits also exist with tea, as commercial production has yet to flourish but seems on the horizon.

“Tea is exactly where the wine industry was 100 years ago in California,” Gervay-Hague notes on the Global Tea Initiative website.

Thompson thinks American tea culture will shift from its current unceremonial, speed-driven teabag ease to something more deliberate and contemplative. She has met people more recently who run tea shops or frequent them that give her this sense.

“In Newcastle, I met a guy who brings just one Chinese tea back from overseas and serves it, and he invited me to come sit and have tea, not like in a restaurant,” Thompson says. “I have met people here who are more interested in the leaf and the processing of it.”

The Global Tea Initiative is holding their third annual symposium Feb. 22–23, 2018, at the UC Davis Conference Center Ballroom free to the public, with the theme of “The Future of Tea: Issues in Sustainability and Preservation.”

Previous Global Tea Initiative symposiums have brought in experts who speak to both scientific and social aspects of the drink. Thompson notes she heard from a man who patented his own Taiwanese tea ceremony, and from a woman who studied the families of plantation workers. This year, Thompson is working to secure a new type of license that will allow her to hold tea tastings and classes in the shop.

In the meantime, if you don’t feel up to the challenge of brewing the perfect cup of Thompson’s Moulin Rouge—which for us deepened in color and thickened in texture over the course of an hour or more to the point of a sweet, heavenly balsamic reduction—try the acceptable ready-to-drink alternative in town: rooibos on nitro at Temple Coffee Roasters on K Street. 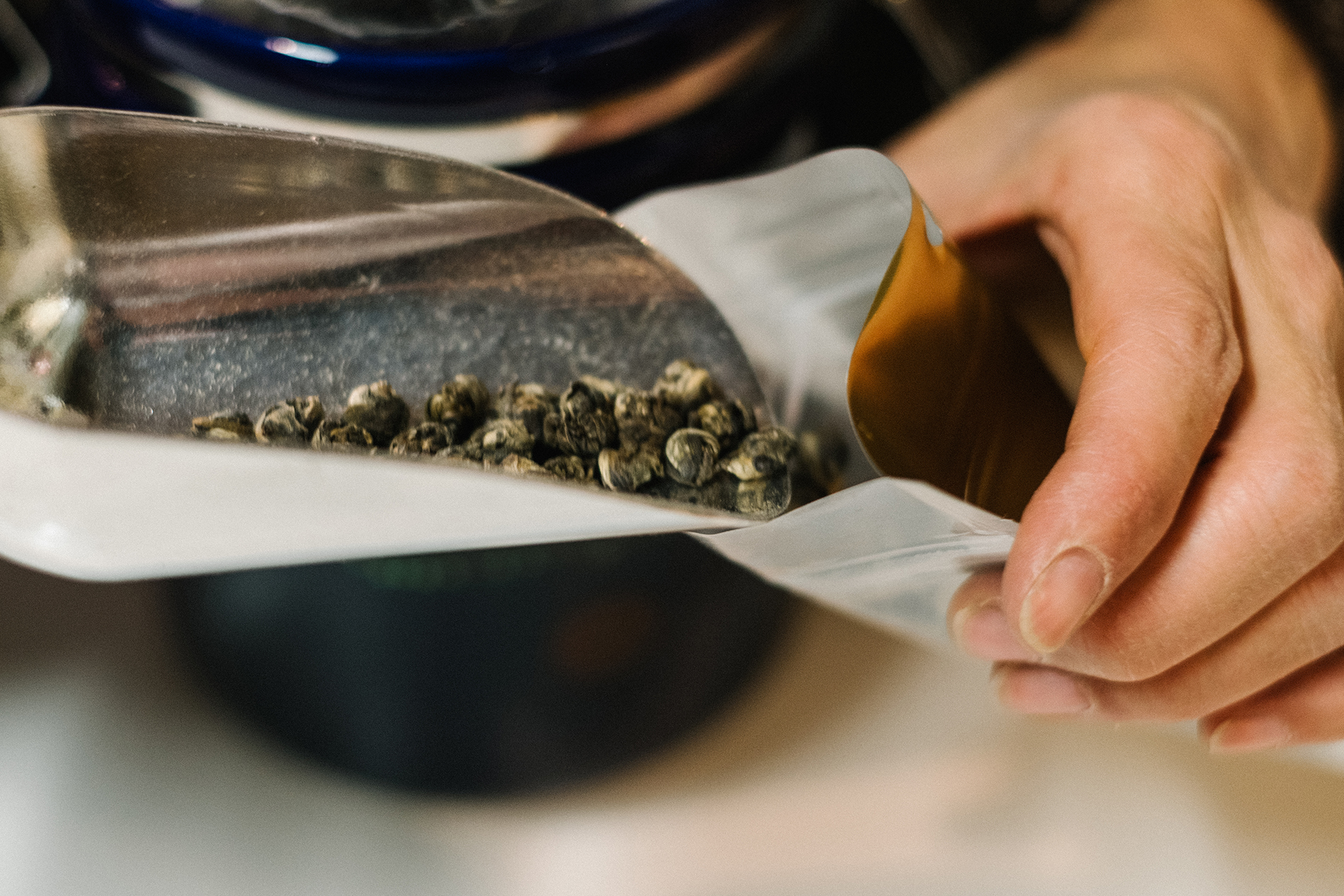 1) If you wanted to host a tea tasting party (and considering it is both National Hot Tea Month and Dry January, you should), stick with one region and try the white (youngest freshest tea leaves), green (unoxidized leaves) and black (oxidized leaves) varieties to taste the range of that region. Or, choose one type of tea and try it from different regions.

2) The temperature of the water can affect the tea leaves. Green tea should steep in less than boiling water, or 185 degrees.

3) New tea drinkers should consider their caffeine tolerance and those who can’t handle caffeine could start with white tea.

4) Seasoned tea drinkers could try Pu-erh, a black tea twice oxidized that can steep up to 20 times with subtle differences in flavor each time.