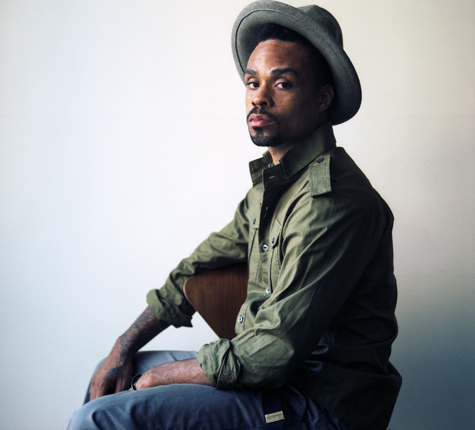 Born in Philadelphia in 1979, Bilal Oliver was immersed in music at a young age. As if through osmosis, he absorbed the energy of the jazz and soul greats that paved the roads he roamed, studying the sounds and applying them as he saw fit. Educated in the arts, he nurtured his dream into a reality and by the time he was 21 already had heavyweights like Dr. Dre and Raphael Saadiq in his corner. His debut released in 2002 was met with resounding praise, but fate took a turn when his followup Love for Sale was leaked, then shelved, eventually resulting in Bilal parting ways with what he had worked so hard for.

The sudden left in his life may have been the right move, as almost a decade after his debut he has pieced together his most creative and liberating piece of work. Airtight’s Revenge (a mark of triumph over the leak) finds Bilal playing the role of the alchemist; blending genres, cross-pollinating sounds and burrowing his way into his own niche. The only constant is the signature voice, and the conviction from which it comes. Read on, and bare witness Oct. 24, 2010 at Dream Nightclub.

I understand early on you learned to recreate Miles Davis and other jazz cats’ songs with your voice. Was that something that you just took to, or did someone hip you to that?
My friends in high school were jazz musicians, and we would always scat all the tunes, that’s just how we would do it. It intrigued me, and then I realized all the great jazz musicians like Dizzy Gilisepe and Satchmo did it, so I followed that.

Hip-hop at this time was getting really big in the United States. Did you ever go through a rapping phase or did you always stick to singing?
I went through a little of a rapping phase. My name was… It was a while ago, but it wasn’t anything serious.

Did I hear you start to say you had MC name?
Yeah, I wasn’t going to disclose that [laughs]… I changed my mind. MC Think [laughs].

From being a kid to teenager, you were signed when you were 19. How have your goals changed since then?
Well, I always knew I wanted to have a band and make music. That’s always been my dream since high school, and it’s all come to fruition. This is my career. I’m making a living off of doing this, so I think I’m living that.

It has to be different musically now on this go-around.
When I was signed to a bigger label, the whole catalyst was to make this one big single that would blow up. I used to say, “Man, I wish I could just make music and not really focus on making that one single.” After a while your whole album starts to sound like that “one big single.” Now, I’m in a situation where they allow me to just make music. I’m able to do a lot more. I went back to the singer/songwriter thing I was starting to do on Love for Sale. I played keyboard on all but two songs, and I wrote them all from piano, so I got to play a lot more.

I heard an interview where you were talking about how you took two years off from music after the Love for Sale situation. You were talking about how you were hanging out with a painter, and how he referred to himself as a musician so that he wouldn’t have the pressure of being a great painter, and how you then in jest called yourself a painter on the flip. Is there a painter you find parallels with as a musician?
I would say someone in the angle of Salvador Dali. He was very skilled, but he mixed everything up and stretched it out and mutated to an obscene level to where it was something new. He knew how to draw appropriately, but he painted so inappropriately. He made his own way. He had the technique to do whatever he wanted to do, and he was just out there.

Yeah, being out there artistically speaking, can be difficult in the major label world. I assume you had people trying to change what you were doing?
Yeah. I went through that. With my last situation, it came up a lot. It was never you have to be like this, but you gotta dumb it down a little bit so people can understand that. I’ve heard that before.

In those words?
Yes [laughs]. “You gotta dumb it down,
people are idiots.”

Without going through that two-year period, do you think you could have made an album like this or was it critical to Airtight’s Revenge?
It was absolutely a critical time. I felt like I was making really contrived shit, so I had to stop and reevaluate things. Whenever I feel like I’m going in circles, I try to find the root of it again. The way you find the root is to dig. I just stopped what I was doing and took a step back from it all for a minute and didn’t really think about it. That was crucial; it was my detox.

I know you worked with Chuck Treece, who was affiliated with Bad Brains. Was his influence something new for you?
Yeah man, Chuck Treece. He really opened me up on this record. Playing with Chuck put me up on a lot. I got into Bad Brains a little in high school, but I got into Ahmir’s [?uestlove of The Roots] collection and found stuff like I Against I and, whoa. After that, I got the whole catalog. I had known Chuck for like 10 years. I met him when I was singing in D’Angelo’s band. When I met him he was playing guitar, but he was also playing drums for a minute with Bad Brains so that just tells you what kind of musician he is. We started jamming out, and shoot, he’s just a monster. But yeah, it taught me how to play with a certain ferocity and simplicity. Simplistic, but I still put my jazz inflections in there. I’m always trying to make the complex simple, in a complex way. Sorta like espresso. Make it a little more potent, but simple at the same time. Like James Brown did with the funk.

And like Dali did with the painting.
Yup [laughs].