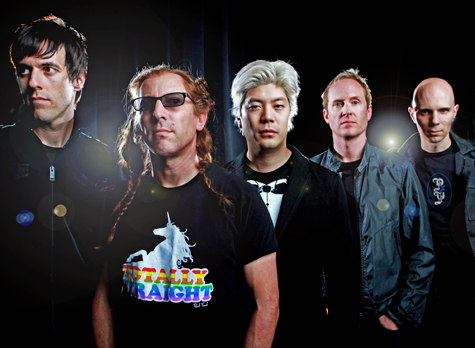 It may be a bit melodramatic to call Billy Howerdel a rags to riches story, but the guitarist and primary songwriter for A Perfect Circle, and more recently frontman for Ashes Divide, has certainly led a charmed musical life. Back in the ‘90s, Howerdel was working as a guitar tech for some of your favorite bands, including Nine Inch Nails, Smashing Pumpkins and Tool. His work with the latter was life-changing. After getting to know Tool’s enigmatic frontman Maynard James Keenan, the two eventually struck up a more meaningful musical partnership. Songs Howerdel had been working on spawned a sort of post-alternative supergroup–A Perfect Circle, of course–which has included members from the aforementioned bands as well as Primus’s Tim Alexander, Zwan’s Paz Lenchantin and Marilyn Manson’s Jeordie White (aka Twiggy Ramirez). Certainly, not bad company for your first serious band.

As A Perfect Circle, Howerdel and company gained nearly as many accolades as the bands its prominent members came from. The group burst on to the scene with Mer de Noms in 2000, which debuted at No. 4 on the Billboard charts. Three years later, APC released another highly successful album, Thirteenth Step, which upped Mer de Noms’ ante and reached No. 2 on the Billboard charts, selling over 230,000 copies in its first week. Though it’s often used in hyperbole, the term “supergroup” seemed to be almost muted in describing APC.

After 2003, though, the well seemed to have run dry. APC released eMOTIVE, a lukewarmly received collection of anti-war song covers (including “Imagine” by John Lennon) and one new-ish song, “Passive,” which was a reworking of a song Keenan and NIN’s Trent Reznor had created for their Tapeworm side project. APC has been officially on hiatus since 2005, freeing Howerdel to release his first “solo” album under the guise of Ashes Divide in 2008 (Keep Telling Myself It’s Alright). This brief break also allowed Keenan to delve into the dark, psychosexual weirdness of his first Puscifer release, 2007’s V is for Vagina.

APC may have been on hold, but it wasn’t forgotten. Soon after Howerdel wrapped up work on Keep Telling Myself It’s Alright, his attention turned back to the group with whom he started out. After a small five-city (Seattle, Los Angeles, Los Vegas, San Francisco and Tempe, Ariz.), 14-date tour in November 2010, the band now stands ready to embark upon its first full North American tour since 2004. Beyond that, though, as Howerdel tells Submerge, APC’s future plans are still being written.

Howerdel says that the dates the band played late last year were always meant as a precursor to a larger tour, but they were also a sort of testing ground to see if the interest was still there after such an extended layoff.

“When we put the shows on sale, and they sold out immediately, we thought, ‘Hey, people haven’t forgotten who we were,’” Howerdel explains. “We needed to see how the shows went and what it felt like getting to know each other again musically, but other than that, yeah, we had the intentions of doing this.”

As the current 29 string of dates (which officially kicked off in Portland, Ore., on June 29 after they played Rock on the Range in Columbus, Ohio on May 22) would probably indicate, APC passed the test with flying colors. Not only were audiences receptive, but perhaps more importantly, the band members–drummer Jeff Friedl, ex-Smashing Pumpkins guitarist James Iha and Puscifer/Ashes Divide’s bassist Matt McJunkins join Howerdel and Keenan in rounding out the current lineup–were energized by playing as APC once more.

“It was received well, but it felt great playing I think for everybody, barring having a cold the whole time,” Howerdel says. “Maynard and I were sick the whole tour. It was harder on him than me, because he had to sing, which is awful having to sing when you’re sick, but I think he did admirably.”

Still, despite the positive response, Howerdel says the band took a cautious approach when planning the current tour.

“We have to trust our booking agent and him saying touring is really grim. There are bands out there that are tried and true that are struggling to sell tickets,” he says. “We proceeded along the way accordingly. We’re doing good-sized places and not trying to get too aggressive on it. It seemed like we picked the right-sized places for the appetite that’s out there.”

Fans eager to hear their favorite APC songs will certainly be rewarded on the tour, but those hungry for more will get a small taste of what may be to come. Howerdel reports that the band plans to play at least one new song on the current string of dates.

It may not sound like much, but it’s a start. Over the past three years, Howerdel says that he also took a hiatus from writing. He explains that becoming a parent played a big part in taking a break.

“It’s a silly obstacle, but it’s the honest truth that I haven’t had a place to work that I didn’t want to run from every time I got in there,” Howerdel says. “I really need to find a spot to work, so maybe we’ll make some money this summer and I’ll get myself a studio–get myself a rehearsal studio that doesn’t have fiberglass falling from the walls.”

However, now that he’s accustomed to the routine of waking up and going to bed earlier than he’s used to, he does find he’s becoming more productive.

“I believe I get more done by getting up at the same time every morning,” Howerdel explains. “I mean, there’s something great and bohemian about, ‘Oh, it goes off when you will.’ It’s great, but there is something you fight in the beginning about having a schedule and having domestication entering your reality. You definitely can have more focus.”

Becoming a frontman for his own band also played a hand in the new material Howerdel has been working on. He says it has given him more of an appreciation for what his partner in APC Keenan has on his plate as primary vocalist. He says it made his songwriting more purpose-driven as opposed to leaving it to “the ether just thrown out and whatever happens, happens.

“In regards to singing, it gave me a newfound appreciation for what it meant to really do it,” Howerdel says. “I always sang with APC, but I always sang backup and to a lesser extent. To have that be the focus–I went from 90 percent guitar and 10 percent vocal to really 99 percent vocal and 1 percent guitar in Ashes, sort of, at least as far as how many calories I burnt worrying about each position… It’s tough work singing.”

However, increased productivity may not translate to a new APC album any time soon. Howerdel says that while he’s writing more now, most of the songs he’s working on are marked for Ashes Divide. While there’s material out there for another APC project, he’s not looking to rush it.

“Last summer, I started writing again, wrote about seven songs and gave Maynard a few to chew on,” Howerdel says. “He’s working at them at his pace. I don’t badger him on the issue. I just wait for him to present something.”

With Keenan currently in the studio working on the new Puscifer record (Conditions of My Parole, due out October 2011), APC may have to wait. This tour, however, will be sure to whet appetites for the band’s U.S. and Canadian fans. At the close of our interview, Howerdel does promise more recorded music from APC, but there’s no firm date on when it can be expected or what form it will take. As he says of the band’s hiatus and the process of recording his first album for Ashes Divide, “It always takes longer then you think it’s going to take… It’s something you can’t really plan. It’s one thing that drives people around me crazy. I don’t plan so much, because my world is about being inspired and doing things spontaneously.” 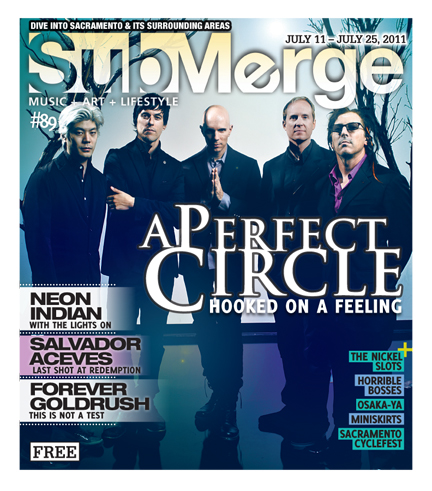 A Perfect Circle will play Sacramento’s Memorial Auditorium on July 29, 2011. For more information on what APC is up to and to order tickets for the show (price of admission is $49.50), go to Aperfectcircle.com.