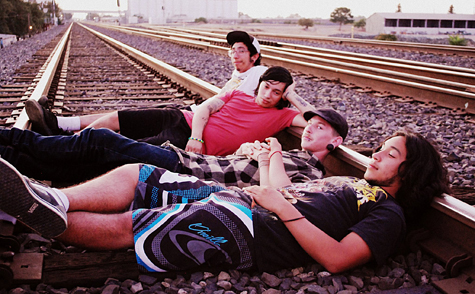 One fateful day, Michael Alvarez went to McDonald’s and came home with more than a value meal. He ended up with a band.

“My friend was too lazy to get McDonald’s, so he sent me out to get McDonald’s,” Alvarez explains. “On my way there, I ran into an old friend from high school, and he wanted me to join a band with him, and that’s how I ended up meeting Shorty [Ruben Trejo].”

Trejo and Alvarez started jamming together around late 2008, by Alvarez’s account, but it wasn’t until the summer of 2009 that their current project, Nightmare in the Twilight, came to be.

“My guitarist at the time was a little more into partying and doing other shit, so it turned into me and Mike jamming out and working on some songs,” Trejo tells Submerge over the phone. “Playing whatever came to mind.”

Just two years later, the band, which features Alvarez on guitar, Trejo on drums, Zaryn Mankins on bass and Trejo’s little brother Santana Estrada on vocals, is ready to release their eponymous debut LP on Oct. 1, the same day they will take the stage as part of the Hella Metal Fest at the Crest Theatre. Though it hasn’t taken a long time for the Sacramento-based death metal band to get to this point, Nightmare in the Twilight’s road toward maturity certainly hasn’t been traveled without some growing pains along the way.

One such pitfall along the band’s path was finding a vocalist. Alvarez says that Nightmare in the Twilight’s original vocalist “wasn’t too into the band.”

“He’d wander off on his own,” Alvarez elaborates during our phone interview. “He’d have random guys hop up with him while he was performing, and they weren’t really any good at all. We realized we needed somebody serious.”

As it turns out, family ties would create the strong bond the band needed from its vocalist. Enter Estrada, who needed some convincing from his big brother before he decided to give it a go.

“He’d always been into vocals,” Trejo says. “It was the main thing he’d heard in metal, the first thing he’d notice in any band were the highs, lows and the mids. One day I heard him in his room practicing, and I was like, ‘He’s getting pretty good.’ We did a show without a vocalist and had a couple of guys come up and do vocals, which really didn’t turn out the way we thought it was going to. We had another show coming up, and we wanted to be more legit about it. I hit him [Estrada] up and said, ‘You’ve got to try it. You’ve got to come do these vocals.’”

With their frontman situation taken care of, the band didn’t waste much time getting into the studio. Nightmare in the Twilight released their first EP in August 2009, The Big Sexy EP, which was engineered by Martyrdom’s Phil Waters.

“He wasn’t the coolest guy, but he recorded us and did a decent job,” Alvarez says. While the situation may not have been ideal, both he and Trejo agree that it was a good learning experience for the band.

“We did learn about recording,” Alvarez says. “We started learning about how to fix our tone better, how to keep timing, what we should and shouldn’t do in the recording studio, not waste time. It was a good attempt at a demo for a band that started that year.”

“The main thing that it taught me to never try to do a split demo with a band that’s not really sure what they’re going to be doing,” Trejo adds. “We tried to do a split demo with one of our friend’s bands, and it just totally fell through, took too long in recording. So that definitely taught me to be well-rehearsed before you come into the studio, because time is money.”

“The main thing was we went in there well-rehearsed,” he explains. “We knew what we wanted and when we wanted it. Some songs had little changes, but it was never ‘how are we going to pull this off?’

“Last time in the studio was more jamming, and this time, we found an exact tempo of what we were going by,” Trejo, who was really looking to push the tempo of each song on the LP, continues. “We were very well structured about how fast we were going to be and where everything was going to be placed.”

Alvarez believes that the more structured approach also arose from multi-tracking the guitars this time around.

“Our demo was just two guitars, and it didn’t sound that great in certain parts when one guitar would cut out and wait for the other one to do the riff,” he says. “We did more layering of the guitar work so it sounds more full. It’s entirely together instead of parts coming off and on.”

The album contains songs that also appear on The Big Sexy EP, but have undergone major overhauls. For example, “The Young and the Restless” (which is a tad sluggish on the EP with an ill-fated jazzy breakdown toward the end of the track) explodes on Nightmare in the Twilight; even the jazzy bit pops with the crisp snap of Trejo’s drums behind palpitating guitars before erupting into the death metal fury that is the band’s signature.

“Our old EP was pretty decent, but we were still new at the time,” Alvarez says. “A lot of off-timing on the guitars, a lot of errors. We’ve changed up so much since we recorded those back in 2009. When we came into the studio this year, it was more like, let’s finalize these and make a perfect version.” Alvarez also adds that the songs on the LP that have been salvaged from the eight-track EP feature rewritten lyrics.

The band’s lyrics, though they may be difficult to discern to the casual listener, stem from a variety of places and are a true collaboration between the band members. Nightmares–hence the band’s name–play into many of the lyrics Alvarez wrote, along with those by the band’s old guitar player Joey Garnica. Alavarez says that he also examines death and dying in the words that he writes, as well as tackling existential questions like what comes after death. Songs such as these could probably be considered consistent with the band’s genre; however, then there are songs like “Chicken Sauce,” which tells the tale of a man who’s driven crazy after eating sauce from McDonald’s.

“We don’t try to come off as a comedy band, but we have a little comedic side to us,” Alvarez says. “We’re not like this uptight, big badass metal band or something like that. We like to show people that we’re not crazy.”

Nightmare in the Twilight is still in the dawn of its young career, and for the moment, though they take their music seriously, it would seem from our conversation that the band is first and foremost looking to have fun and make music they enjoy. And unlike the menu items available at the fast food chain that inadvertently sparked their formation, Nightmare in the Twilight is hoping to make music that isn’t so plastic in its sameness.

Hella Metal Fest will hit the Crest Theatre, 12 bands strong, on Oct. 1. Tickets are $12 in advance, $15 at the door, and can be purchased through Tickets.com. Go to Hellametalfest.com for full lineup information and to find links to buy tickets. Nightmare in the Twilight’s self-titled full-length debut will be available starting Oct. 1. The band’s The Big Sexy EP is available for free download at Nightmareinthetwilight.bandcamp.com.