Music has gotten progressively safer since the ‘90s—even metal. Nifty programs like ProTools have smoothed out a lot of the mistakes that used to make records sound more human, and the heavy use of effects have made guitars into sorts of musical science projects. These aren’t necessarily bad things—just another step in the constant evolution of rock music. Still, that’s why it’s refreshing to hear a band such as Black Mackerel, Sacramento’s grungiest and most primal metal band.

Black Mackerel’s frontline consists of Rotten Scotty Gardner (vocals and guitar) and Scott Clayton (bass and vocals), a couple of working class guys you’d be hard pressed to find a photo of without beers and cigarettes in hand, they say. They have day jobs and responsibilities—Gardner has an 11-year-old daughter—but armed with their instruments, the duo is capable of unleashing unholy levels of whoop-ass through their music. On Feb. 28, 2013, Black Mackerel released Fight or Flight, the band’s first album, which is adorned with a beheaded chicken on its cover.

It’s just eight-tracks deep, but it’ll only take a quick listen to realize the cover image is quite fitting. Songs such as opener “Poison Death Motor” and “Good Friend” are grueling, bottom-heavy grinders sure to get your gut rumbling and your head banging. Powerful riffs, brutal bass hooks (“Evilkenevil” is as catchy as it is heavy) and the full-throttle drumming of Slade Anderson punctuate what is sure to be one of the most memorable local releases of the year—in any genre.

The intense interplay of Gardner’s guitar work and Clayton’s bass playing stands at the forefront of the album. It’s a sort of sludgy stew—hot, chunky and wholly satisfying. Clayton, a guitarist by trade, brings a guitarist’s mentality to playing the bass.

“I keep the bass on the bottom end…but I totally play it like a guitar,” he says. “I just treat it like it’s a four-string rhythm guitar. I can slap-pop and do all that shit with my fingers. I could probably be a real bass player if I wanted to, but that’s not really how I want to play. I want to be rhythm guitar on the bass.”

“Scott is like the lead on the bass, and I’m more of the rhythm,” Gardner interjects. “We do everything a little bit backwards.”

Forwards or backwards doesn’t seem to matter, whatever they’re doing is working. But Black Mackerel almost didn’t make it this far. The band actually formed back in 2004, but with the passing of original drummer Kenny Mackrel, the band’s namesake who took his own life back in 2007, Black Mackerel’s future seemed unsure.

“We were going to quit, but Kenny’s brother Dennis told us don’t quit, keep it going,” Gardner says. “We went a couple of years with another drummer, and it was good, but it was kind of stagnant.”

Enter Anderson, with whom Gardner and Clayton also play alongside in thrash-punk forefathers Condemned?, a band that holds the distinction of having one of the first releases on venerable metal label Nuclear Blast. Gardner says that Anderson is “one of those drummers who won’t stop playing in practice.” This left Gardner and Clayton with two choices, “get mad or just start jamming,” Gardner says.

Gardner credits Anderson with getting the current incarnation of Black Mackerel up and running.

“I don’t want to stroke him too much, because when he reads this, he’s going to think he’s the bee’s knees,” he jokes. “He was kind of the catalyst for everything we’re doing now. Everything just started to pick up songwriting and gig-wise. He just started to pull it together somehow.”

“Slade’s been in every band there ever was,” Clayton adds. “It certainly didn’t take that much to make it work.” 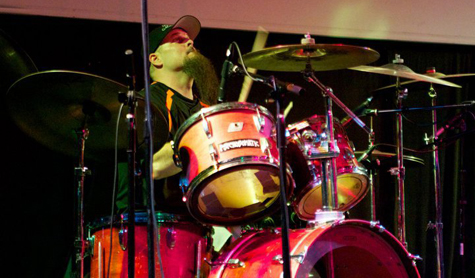 Gardner describes Black Mackerel’s writing process as “open ended,” in which everyone has a say as to the direction of the songs. Given Anderson’s always-be-drumming mentality, and Clayton and Gardner’s eagerness to keep up, new songs can happen at any time.

“These guys will write something while I’m in the bathroom sometimes,” Clayton says. “Those two are just going off while I’m taking a piss. I’ll come back and I’ll hear a song, I’ll be like, ‘Don’t stop doing that!’”

Gardner even wrote a song on a short-scale Fender guitar belonging to his daughter, who also sings and plays violin; however, she has yet to develop an ear for metal.

“She’s into New Direction, or One Direction or whatever the fuck that is…Nicki Minaj and all that. I’m hoping she’ll get over it, but whatever,” he says. I don’t care what she’s playing as long as she’s into something good like music.”

Gardner says that a lot of songs Black Mackerel has written since Anderson joined the group didn’t even make it to Fight or Flight, though they may be released at some point down the road. And Clayton adds that the band is looking to write more songs to progress their sound even further.

The band’s immediate future, however, will involve playing shows here and there to promote Fight or Flight.

“We all have bills and day jobs, so we can’t take off more than four or five days at a time,” Clayton says. “We love going on the road. If they’d pay us, we’d be doing it all the time.” 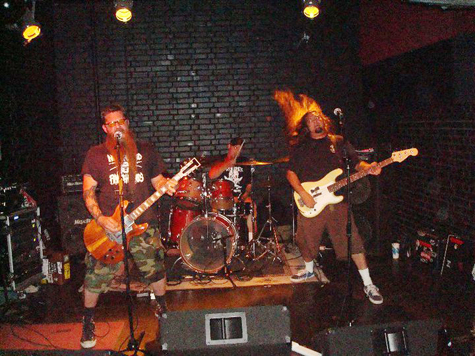 He says he hopes Black Mackerel will make a run up to the Pacific Northwest soon, but in the meantime, the band will play a special show with Kill the Precedent and Murderlicious on April 12 in Sacramento at Blue Lamp. The show will be a benefit for their friend Tricia Duncan, who was badly injured after a fall. Duncan suffered some brain damage from the fall and lost her job and apartment as a result. Proceeds from the show will be donated to Duncan.

Music may not be Gardner and Clayton’s only concern, but having family obligations or day jobs hasn’t been a death knell for Black Mackerel. If anything, those things have enhanced their drive to create music.

“I think it keeps us in touch with reality,” Gardner says. “It gives us something to write about. You can’t love or hate anything unless you’re exposed to it. Dealing with people and everything every day, that’s where I get some of my influence. People piss me off, so I write aggressive songs about it and get it out, and then I feel better later. It’s therapeutic.”

Clayton adds, “It does keep us grounded. I would quit my day job if I could and just go play music for a living. It’s kind of tough to juggle, but you do it. It’s a labor of love. If I didn’t play, I wouldn’t get up to work in the morning. I’d probably be a miserable drunk by the railroad tracks.”

It may be a juggling act, but the guys in Black Mackerel are handling it really well. The band may be something of a throwback to a wilder time in music, but they’re putting forth a sound that’s just as vital and stirring as ever.

Check out Black Mackerel, Kill the Precedent and Murderlicious at Blue Lamp in Sacramento on April 12 at the Tricia Duncan Benefit Show. In addition to great, heavy music, there will also be raffles and baked goods for sale. Entrance is just $10, and the money will go to a very worthy cause. If you’d like to listen to and purchase Fight or Flight, go to http://buriedinhell.bandcamp.com/releases.