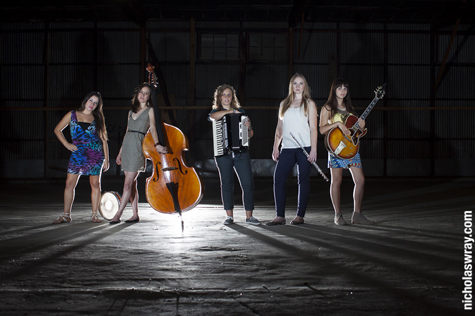 In a short time, Sacramento’s Cave Women have been churning out exciting new material

For Sacramento band Cave Women, things fell into place very quickly. Whereas some bands take years to find their voice and record, the five highly skilled musicians who make up the group hit it off almost instantly.

Is this the musical equivalent of love at first sight? Well, not entirely. But I thought I was pretty clever when I thought of that while interviewing Cave Women vocalist/bassist Casey Lipka.

“It’s really special to be able to play original music with everyone,” Lipka says of becoming fast musical friends with the other Cave Women, who have only been together as a band since 2011. In that time, they’ve already released a five song EP and a full-length, self-titled album, which was released Nov. 15, 2012.

“I think in a certain sense, that’s what we’ve all really been enjoying,” Lipka elaborates. “We’ve all participated in different music projects, but for it to be our own compositions and have them develop in this way and just be able to work on our music together, it’s been such a great opportunity.”

Lipka has been on quite a journey in order to make it to where she is today. A Venice, Calif., native, Lipka began studying music at Sonoma State before furthering her education in Montreal, Quebec. It was there that she began learning to play bass.

“I was hanging out with a lot of bass players by chance,” says Lipka, who lists voice as her first instrument. “They had this really big room for bass in that school. If you could imagine just walking into a room with 10 human size instruments, it was pretty intense.”

About three years ago, she moved to Sacramento, where she still lives and teaches voice and piano. While enrolled in a world music class at Sacramento State, she got turned on to the mbira, a small instrument with origins in Zimbabwe that consists of 21 to 28 metal keys that are plucked by hand. She has brought her love for the mbira to Cave Women.

“We’d go through all these different types of music from all over the world, and my teacher put on that kind of music,” she says. I don’t think I was concentrating in the class, but the moment she put on that music, I was like ‘What is that?’”

Though she has bounced around quite a bit in her life, Lipka seems to have found a home in Sacramento, which she calls a “small big city.”

“What I mean by that is that there’s enough going on that there’s quite a bit to do, but at the same time you can have a community of people here,” she explains.

Not long after moving to Sacramento, Lipka met up with Alicyn Yaffee, Cave Women’s vocalist/guitarist, and the two began performing as a duo, Lipka says. The duo was soon joined by Vanessa Cruz (drums/percussion), then Emily Messick (vocals/accordion) and finally Kim Davis (vocals/flute).

“I happened to get a free recording session at the Art Institute in San Francisco,” Lipka says. “And all of a sudden, we had this recording and we were somewhat of a band. It was like, ‘Wow, this works.’ It was definitely an evolution of instrumentation and sounds and addition and experimentation.”

Explosive growth would probably be more of an apt term. Of the five songs on the band’s first EP, only two of them appear on the self-titled full-length. On top of that, Lipka reports that she and the band are already working on new songs. Not bad for someone who says she’d hardly written her own compositions before starting Cave Women.

“Songwriting is very new to me,” she says. “Cave Women kind of kick started it for me.”

Cave Women’s songwriting maturity betrays the group’s youth as a band. These musicians have an almost magical connection with one another that’s easily apparent on their debut full-length (recorded by notable engineer Pat Olguin, who has worked with Papa Roach, E-40 and Black Eyed Peas), which incorporates world music and jazz influences into catchy pop song structures. This could be a byproduct of the band’s nurturing songwriting process that allows each member’s talents and instruments to shine.

“Someone will come to the group with a composition, at whatever stage it’s in, and everyone adds their own voice to it through their instrument,” Lipka says. “There isn’t necessarily a conversation like, ‘Oh, there’s a lot going on. You should add less here.’ It’s more of a natural process of adding in the different voices.”

One of the more striking songs on the album, “Hunger” practically swoons through your speakers. Beautiful, dreamy harmonies mingle perfectly with the tune’s somber lyrics as the melody builds to a soft crescendo. Lipka says that “Hunger” is one of the songs that Yaffee first brought to the band, but the rest of Cave Women were quick to add their own personal touches to round out the track.

“[Alicyn] had her melody and guitar part, and the voice parts that we added on the end, everyone made up their own voice part,” Lipka says of “Hunger.” “That was really neat in the sense that…gradually every person added how they heard their own part mixing into the song.”

The video for “Hunger,” shot by photographer Nicholas Wray, shows a behind-the-scenes look at the band in the studio working on the full-length album. In it, you can see Lipka at work on bass and with her mbira, which she has fixed to the back of an acoustic guitar. She says that it amplified the mbira’s sound in a “richer way, because it had the guitar body for it to resonate in.” She goes on to say, though, that you won’t see her trying this trick on stage.

“It’s way too complicated. I don’t think I could hold a guitar and an mbira at the same time,” Lipka says through laughter.

Though the band just seems to click as if it was fate, Lipka does say there are some complications in playing in a band like Cave Women. The band employs so many instruments and sounds that it’s a challenge for the group to recreate their sound live.

“There have been shows where I’m like, ‘My mbira is over there. How am I going to get there?’”

Though the stage might be cluttered, Cave Women’s songwriting is anything but, and a bright, productive future seems pre-ordained. 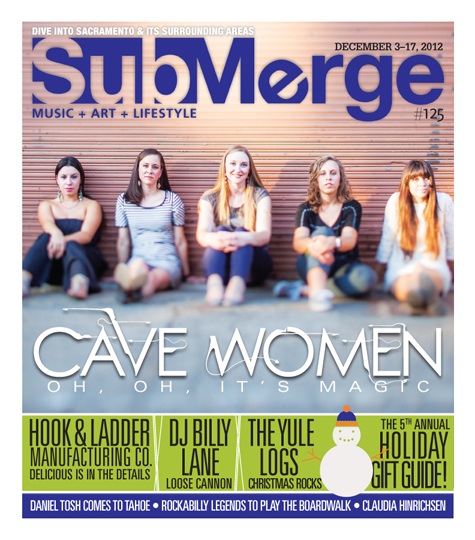 Celebrate the release of Cave Women’s first full-length at Bows and Arrows in Sacramento on Dec. 19, 2012. Alto and David Alfred will also perform. The all-ages show is $6 and starts at 8 p.m. To listen to and order the album, go to http://cavewomen.bandcamp.com/.