In 2009, chief songwriter Will McGahan (guitar) and yours truly (bass) built the beginnings of Cold Blue Mountain in the unique college town of Chico, California with the simple goal to start a heavy band. Joined by friend, funnyman and drummer Daniel Taylor, and guitarist Sesar Sanchez shortly thereafter, the instrumental metal band was soon playing local shows with an expanded sound.

In 2012, Chico’s resident metal vocalist (and Amazing Race contestant) Brandon Squyres convinced the quartet that vocals were necessary and themes were needed for the music, thus rounding out what is today’s version of the group, along with a new savage bassist Adrian Hammons.

With McGahan’s signature core songwriting intact, the group remains a force to be reckoned with on the heavy music circuit. The beauty of Cold Blue Mountain is that they are much more than your typical metal band and evidence of this can be found on their brand new release, Old Blood. Opening track “Seed of Dissent” begins with an emotionally driven piano track by Taylor that leads into sedating guitar strums by McGahan and Sanchez, which abruptly ceases into a classic guitar harmony. The sonic explosion of heaviness quickly ensues and Squyres’ sickening screams plead: “How much of this tyranny can you handle without speaking out against the captors that took hold of our land through force and corruption?” It seems quite apparent that Squyres put significant time into researching atrocities of American history and penned well-thought-out themes that make the new record a cut above.

What you’ll find within is a group of individuals who are casual, but committed to the craft of writing, performing and presenting the best product they can. Just about every member plays in another prominent Chico group (Amarok, Surrogate, Teeph, Touch Fuzzy Get Dizzy), but with Old Blood, they might want to make Cold Blue Mountain a primary focus.

Drummer Daniel Taylor and vocalist Brandon Squyres took time out of their busy schedules to discuss the making of Old Blood, touring and other shenanigans. 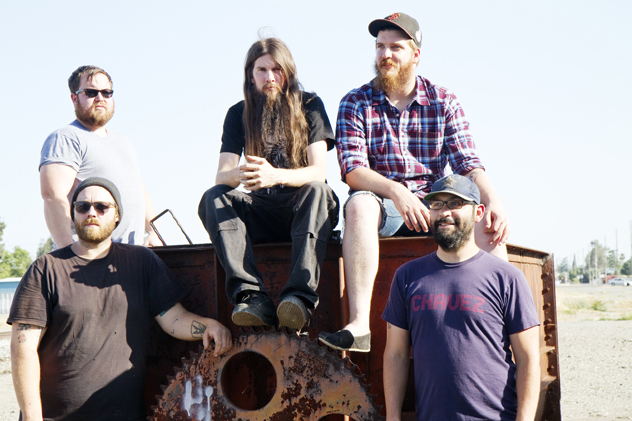 How has the dynamic of the group changed since its early days as a trio?
Daniel Taylor: In some senses it’s a totally different beast, but in a lot of ways the vibe is the same since the beginning. We don’t necessarily play progressive metal or post rock, but the music has stayed true to a hybrid of having melody, riffs and being catchy. Also, we’re no longer an instrumental band and there are three new people in the band that weren’t before. We’re somewhat defined now by having a strong vocalist with experience and presence. Brandon also acts as a coach of the band, conducting all of us to continue to practice songs, making them better or more epic.

What can listeners expect from Old Blood? Did you guys try anything new this time around in the studio?
DT: We spent the better half of a year working on the recording, bits at a time. Before we went into the studio to track anything with Chris Keene [producer], our friend Greg Hopkins recorded all five songs on the album at our practice space. We did pre-production on every song we planned on recording, which gave us a rough copy to analyze and dissect. With our own intuition, we slowed down tempos making them sludgy or heavier, and trimmed down or altered parts of the songs to make them more cohesive. Will went through the songs with a fine-toothed comb and dialed his parts in and layered a lot of guitar tracks. Keene also helped serve as a final judge to whether or not we should include or scrap certain parts in songs.

Can you explain where the themes on Old Blood originated from? When did you decide to do a concept album?
Brandon Squyres: When I first joined the band, song titles were already in place and [I] just made the lyrics work with the existing titles. When we were making the new record, Sesar wanted the theme to be about breaking the will of man. I liked the idea, but took it a little further and wrote a concept story about a group of people that had been broken down who would rise up, take action and get back to who they were. I found inspiration with researching Native Americans and my own genealogy. In order for my Native American relatives to get government benefits, they would have had to give up everything they fought for just to be labeled something else. A lot of my relatives weren’t willing to compromise because they were so proud of who they were, thus weren’t recognized by the U.S. Government as being Indian. I was inspired by their self-preservation and perseverance. The ideas for the album were written with some of these themes in mind, but not about a specific culture or time frame.
My goal was to make the lyrics go with the structures of the songs like the score of a movie. The tone of the music goes along with the stories; like on “New Alliances” there is a calm before the people make attacks towards outlying outposts of a big city.

How was the decision made to sign on with Halo of Flies Records?
BS: I’ve worked with Cory von Bohlen (owner) on releases with my other bands (The Makai, Amarok) and have toured with his band (Protestant). We all like the releases he’s put out and it’s much more enjoyable to work with a friend. We wanted to give Cory the first chance to put out the record because he is a great guy and always puts out a great product.

How has touring altered the perspective of the band? Do you have any upcoming tour plans?
BS: We have plans to do a small weekend tour in Eugene, Portland and Seattle in December, then a full U.S. tour in January and February.
It’s nice when you’ve worked so hard making the music to hit the road and see people’s reaction to your music. You can read or hear reviews of the music, but it’s much more fulfilling seeing people’s reactions to the live shows in person. Touring is also a great bonding experience and makes you a stronger unit. You start to realize how to better work with each other and this transfers directly to the live setting.
DT: When you play in your own town, it feels like more of a hobby, but when you leave town and all you have to do that day is play a show, I tend to have more focus and play better because I want to perform the best I can. We always seem to have great shows in Seattle and Portland, so we figure it’s best to go back to the well.