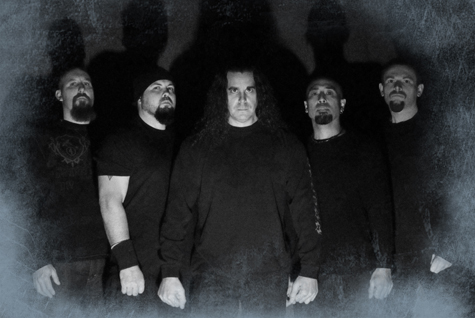 Local thrash metal band Deadlands is barely more than two years old, but this isn’t a group of rookies. Members Brian O’Connor (vocals), Michael Garner (lead guitar), Kevin Rohr (guitar), Steve “Dedbass” Northam (bass) and Danny Sabian (drums) have earned their metal stripes in a variety of notable bands including Vicious Rumors, Spectre, The Council and HateFX. In 2010, they joined forces to form Deadlands and soon after released their first album Evilution, which has now been released worldwide by German metal label Massacre.

Re-released Feb. 22, 2013, Evilution received something of a sonic facelift for its Massacre debut. The band turned to Juan Urteaga, who has produced Machine Head, Testament and Death Angel in the past, to give the album the punch it needed for an international audience.

“We had him add more of a lower end,” Northam said in a recent phone interview with Submerge. “It’s got a much bigger sound to it.”

Deadlands also added a cover of Dio’s “The Last in Line” to round out the re-release’s track listing.

Evilution has a very modern metal sound, but it’s also something of a throwback. Contemporary influences such as Killswitch Engage and Lamb of God mingle with old school nods to King Diamond, Mercyful Fate and classic thrash bands such as Testament and Exodus.

The link between the new and the old can be heard most clearly in O’Connor’s vocals. Though he’s not afraid to release a good growl when the situation calls for it, he’s equally adept and letting out a classic metal vibrato. What you won’t hear, however, is the tried and true Cookie Monster-style vocals that have become pervasive in modern metal bands. Northam said that this was an intentional move on the band’s part.

“I think that’s something we all wanted, because a lot of us, other than Brian, have been in the Cookie Monster bands, and I think we all wanted to try something different,” he said. “We did think it would separate us from everyone else, because the scene has become filled with growling.”

More nods to the days when metal was metal come in the form of Deadlands’ penchant for solos. While Garner and Rohr both prove prodigious in their fret board mastery, the band also reached out to a few metal greats to flex their shredding muscles. “Final Solution,” a track from Evilution features a bevy of guest spots from Mercyful Fate guitarists Hank Shermann, Michael Denner and Mike Wead. King Diamond’s Andy LaRocque and Serpent and Seraph/Dragonlord’s Claudius Creamer also provide solos for the track. Elsewhere, Glen Alvelais (Testament and others) and Steve Smyth (Nevermore) heat up as guests on “Path We’ve Chosen.”

“We laid down all the rhythms for the album, and Michael [Garner] laid in his leads later. He got to that song [“Final Solution”], and he realized that he had seven solo slots,” Northam said. “He’s a huge King Diamond and Merciful Fate fan. He just started hitting guys up. He started with Hank Shermann, that was the first guy he got in touch with through email. He liked the song and said he was down… They all liked the song. It was cool. We were honored that they wanted to be on the album.”

Deadlands is currently working on new material for a forthcoming album and gearing up for the Evilution CD release party at The Boardwalk on March 16, 2013. Northam gave us some insight into the band’s writing processes and also explained why Deadlands is not simply shredding for shredding’s sake in the following interview.

How did you get hooked up with Massacre?
Our singer Brian O’Connor, he toured the world with Vicious Rumors. He’s well known overseas. He was familiar with Massacre records, and he flew the album by them. They really liked it and they wanted to pick up that album, so we just decided we’d add one more song and give it a better mix since it was going worldwide.

I was listening to Evilution, and I really dug the sound. A lot of the lyrics have a political or socially conscious bent to it. Was there a theme behind the album?
Yeah, the theme was generally about the apocalypse and the decline of the world. It’s from the starting place where politicians get too greedy and kind of suck from the world, and then the apocalypse and life after that. The album has the ongoing theme of that. The lyrics are something we all sort of collaborate on.

How does the collaboration work out lyrically?
Lyrically, most of it’s Brian. I’m the other main lyricist. Occasionally a guy will throw in an idea for a hook or something…

I predominately wrote the lyrics to “Asphyxiate the Masses” and “Shed My Skin,” but Brian was there for the whole process. He took out parts of mine that he wasn’t sure of and added his stuff. He was definitely involved with the process.

What kind of place were you coming from with “Shed My Skin?”
“Shed My Skin” is about drug addiction. It’s something I’ve dealt with. My father was a heroin addict. There were several heroin addicts in my family. My best friend grew up around a lot of meth heads. It’s just something that I saw a lot growing up. “I was gonna kick tomorrow…” was about quitting, but the people never get around to it, and they end up dying, which I saw a lot growing up. It’s about the decline, being an innocent person and you slowly partake in drugs and watching it eat you up until you die. You see the people want a way out, but a lot of times they don’t find their way out.

Does it make it easier to write lyrics having a thematic focal point, or does the theme just come out after you’ve started writing?
With this album, ever since it started coming into play, there was that apocalypse thing. Fortunately, that’s something that ties into so much. Any time you’re on hard times—like, say, there was an apocalypse, or right before an apocalypse—people start using drugs. Any bad situation, drugs come into play. It’s fitting for so many topics, it really made it easy to write for, thematically.

You have a lot of guest soloists on “Final Solution.” Was it tough to find a spot for all of them on the song?
No, there was a little bit of tweaking, because we didn’t figure everyone would agree to be on it! We ended up extending it a little bit, because we wanted to get all those great guitarists in there.

When you play that song live, does it put a little extra pressure on your guitarist?
Oh yeah, he’s good though. He learned all the other guys’ solos. I feel sorry for him, but he got it.

You’ve played in other bands before this, how does your experience with Deadlands compare?
Personally, it’s been the best experience I’ve had as a band. I’ve been in bands that I’ve enjoyed, but I’ve never been in a band where everyone is such a pro player. All of these guys are so talented.

You mentioned that you were working on new music, could you talk about that a little bit?
We’re mainly putting together riffs at the moment, working that out. Once we have what we feel is solid, we’ll have Brian come in and dictate what parts he’d like to sing on and rework the songs at that point.

The thrash metal sound is so technical. Getting together on riffs and stuff, is that something you have to drill constantly to get it to a point where you like it?
Yeah, it takes a little bit of time. I’ve been in the technical death metal bands before, you can just throw those riffs back to back. It’s a lot harder what we do, because we write songs. You have to think about the singer too. Even though we get crazy technically on some parts, we realize songwriting is the most important part, and we realize we have to bring it back to that. That’s actually harder than the technical riffs.

So for you guys, it’s not just shredding for shredding’s sake.
Exactly. That was the most important thing about getting the members. We wanted guys who could play their instruments and shred, but we all realized and seen before that a lot of times guys like that aren’t such good writers. We wanted to make sure we had a band of writers.

You have the CD release show at The Boardwalk coming up. What do you guys have coming up after that?
After that, we don’t have any shows lined up. That’s when we’re really going to start hitting the writing harder. Depending on the record sales, we are trying to work out some tour overseas and in the United States, but that’s all up in the air right now.

Does it make things a little more difficult working with a label in Germany?
Not really with the way computers work. That’s just how everyone communicates. Metal is just bigger across Europe than it is in the States. It’s actually better because we’re getting more pushed over there. We’re in the magazines on the shelves over there and stuff like that. The big time metal magazines are reviewing our album. We get the interviews over there, where we don’t quite get as much love in the United States, but things could change with the album release.

It must be a surreal feeling to know that thousands of miles away that people are reading about you.
It is. it’s really cool.

But then at home you’re kind of low key.
We’ve been getting the best of both worlds.
Our shows have been going really well around here, and the support we get over there is incredible.

See Deadlands headline their CD release show at The Boardwalk in Orangevale on March 16, 2013. War NRV, Force of Habit, Steel Savior and Dire Peril will play the support slots. Tickets are $12 in advance and $15 at the door. You can purchase tickets in advance and learn more about Deadlands on their website Deadlandsmusic.com.