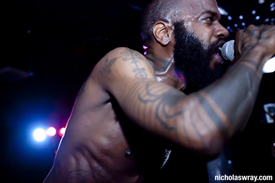 Sacramento-based controversial rap-punk trio Death Grips again caused a shit storm last week when they leaked its new album NO LOVE DEEP WEB on the Internet after their label (Epic Records) apparently told the group they couldn’t confirm a release date. “The label wouldn’t confirm a release date for NO LOVE DEEP WEB ‘till next year sometime,’” Death Grips tweeted, followed by, “The label will be hearing the album for the first time with you.” True to its word, the next day the group released the album along with its graphic album art (a hairy, erect penis with the album title sloppily written on it in black marker) for free on a number of file sharing websites including their own, Thirdworlds.net, which was later shut down (the band claimed their label did it). What nobody can figure out for sure, although every music blog under the sun is trying, is if Epic was in on the whole thing all along, making for the most brilliant PR move ever, or if Death Grips really are crazy-as-fuck and doing whatever they want with an album that was paid for by Epic. Either way, the damage is done, the new album is out, tens of thousands have downloaded it and the band has since stated (again via social media) that they “have no idea when the new album will be physical or if it ever will be.” Sonically NO LOVE DEEP WEB is tough to wrap your head around. It’s far darker and (for me at least) much harder to get into than the more pop-y (I use that term loosely) The Money Store, which Epic actually legitimately released earlier this year. After a few listens through it’s growing on me, although I will admit it’s a bit awkward when an erect dick pops up on my phone every time I click on a track. See and hear for yourself at Thirdworlds.net, as of press time the website was back up and was still offering the album as a free download.