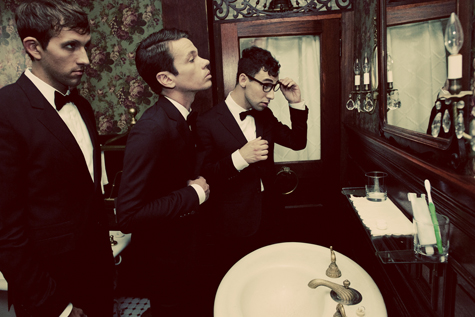 Jack Antonoff of Fun. sounds off on an important time for his band and a key moment in American history

Fun. stands at a difficult crossroads for any band. Their hard work over the past four years is starting to pay off in bigger success and more recognition. Some Nights, the band’s sophomore album, was released by Fueled by Ramen on Feb. 21, 2012. Powered by the hit single “We Are Young” (featuring space-age hip-hop chanteuse Janelle Monae), the album topped Billboard’s rock and alternative charts and peaked at No. 3 on its Top 200. Submerge spoke to Fun.’s Jack Antonoff before he and his band were set to head out on a spring headlining North American tour through early May, of which many of those dates are already sold out. Antonoff sees the tour as a big step forward for Fun.

“I don’t know if it’s just the tour or a lot of things that are culminating for us now,” Antonoff says. “For better or for worse, we’re definitely having a moment.”

This has left Fun. having to deal with the sometimes cumbersome burden of increasing popularity, though it’s not a burden they seem to shy away from shouldering. However, Antonoff acknowledges, “It’s not a very simple thing. There are a lot of angles to it.” He expresses a desire to keep the best interests of those fans who have been with Fun. since the beginning close to heart.

“One thing that constantly crosses our minds is that the fans who have been coming to our shows and supporting us for the past three years never feel alienated,” Antonoff says. “With the song being played on the radio and all of the TV stuff happening and the band becoming more popular, that can be weird for some of the people who have been here since the beginning.”

Fun. has made headway into the late-night talk show circuit, appearing on Conan, but the band has also gotten the Glee treatment recently. “We Are Young” was covered by the students of the fictional William McKinley High School on a recent episode of the popular TV program.

“We thought they did it incredible justice,” Antonoff says. “With a song like ‘We Are Young,’ it could have been placed in a really cheesy scenario, but they put it in a really poignant moment, in a real culmination and an emotional moment in the show. It was great to see the way it played out.”

“We Are Young,” as with many of the songs on Some Nights, would seem a perfect fit for a show like Glee. Soaring, sing-along-worthy, energetic pop wrought with emotion is the order of the day. The album has the feel of a mini-rock opera in which Fun.’s singer Nate Ruess seems to be giving a tactful nod to the great frontmen of the past (Freddie Mercury comes to mind). However, much has been made of Ruess’ growing infatuation with hip-hop as a major impetus behind the album. This was probably compacted by the band’s hiring of Jeff Bhasker, who has worked with artists such as Birdman and Kanye West in the past. The hip-hop influence can certainly be heard in the layers of production and catchy beats, but Antonoff says that those who are familiar with the band won’t have to readjust to a new and radically different sound.

“I think hip-hop gets talked about a lot because it was one of the more recent influences, but huge classic rock music and theater and classic pop are the influences that the band was built on,” he explains. “Those don’t go anywhere.”

In the following interview, Antonoff talks a bit about working with Bhasker and touches on an issue he and the band take very much to heart–gay civil rights.

You were picked to be on Glee, and I was wondering how that came about and what your initial reaction was to that.

With Glee, they just called us and asked us if they could use the song. There wasn’t really too much more to it.

We were really excited about it, because Glee is a really positive, really cool show, in a time in America when you don’t get a lot of that. There are very few sources in the media on the mainstream level that are telling the stories and giving the voice to any sort of underdog–particularly in Glee with the gay community. If you could imagine being a young gay kid growing up in Middle America, a show like Glee may be your first opportunity to come to realize that you’re completely normal. We were really proud of it.

Listening to the song, it seems like it would be tailor-made for that kind of thing–a show about young people and it has such a big sound to it. I saw a clip on MTV.com where you mentioned that “We Are Young” was like the bull’s-eye of Some Nights. Was that one of the first songs you wrote for the album?
I think it was the second or the third, but it was the first song we worked on in the studio. It was the first song that we realized that would dictate a lot of the album.

So after that song came together, did you find the rest of them clicking into place? Did you start tailoring the rest of the songs so they’d fit in that vein?
I don’t know if songwriting is ever a problem, it’s more about production and feeling and where to take them on that level. After that, it became very clear the parameters of the album, and the job of fitting everything else into that–because you want an album to have a sound, but you also want it to be extremely diverse and fascinating, so you really have to set a framework of where you can go with what that album is. To have a centerpiece is really an invaluable tool.

How was it working with Jeff? What did he add to the album?
Jeff was amazing. He added this whole element that we never would have come across on our own, which, at the end of the day, is what you hope for in a producer. On a very specific level…but more importantly on a non-specific level, it was his attitude, his excitement, his passion for the music. Not that we don’t have it, because we have a great deal of that, but he had a different kind of it. It’s his special brand of it, which is almost physical and intense, which really rubbed off on us. It made us more excited and more willing to make an album that was going to have a more physical and more immediate reaction on that kind of level…

Everything is always going to be our vision, and his job is to guide that vision. He was the element in the studio that made a lot of those dreams come true.

I saw that you guys are working with Revel and Riot on this spring tour, and I was wondering how you got involved with that organization and if you’d like to talk about that a little bit.
We’re really excited to be doing that. Gay rights mean a lot to us, and more importantly they should mean a lot to everyone, but unfortunately in 2012, a lot of people are really apathetic about it, or even worse and have some bizarre opinions about it. It’s a human rights issue. We all know where it’s headed, and we all have the opportunity to help make it right, or be silent and be a part of holding it back and denying people their basic rights.

One of the biggest problems with the issue is a lot of people don’t see it as their problems. They don’t say anything, they don’t speak up. They quietly support and therefore don’t really support at all. As a band of three straight guys, we feel it’s vital to use whatever platform we have to make a statement about this and help educate and be very clear about where we’re coming from. We’re the kind of people, and our shows are the kind of shows, where none of that bullshit would ever be tolerated–no homophobia, or non-acceptance of any kind of person. More importantly than that, we urge our fan base to really take a good hard look at how they personally are or aren’t helping the issue.

We live in a huge moment when it comes to gay rights, where it’s going to tip one way or the other. It’s getting to the point where we’re all on the hook, whether we’re doing nothing or we’re doing everything. Whatever we’re doing is some sort of statement.

Maryland just passed a bill allowing gay marriages. It seems to be tipping in a positive direction. Do you see that continuing or are you skeptical about the climate in the future?

What makes me skeptical is that–I think about African American civil rights–people were treated a certain way, because that’s all anyone knew. So when that changed, people were reeducated, and as generations moved on and things changed, it became more of a level playing field. What’s different with gay rights is that the Bible, which a lot of people think is really great, says it’s a sin to be gay, and I don’t see the Bible going anywhere. That creates a different scenario. What I see is a lot of great legislative change. I see gay marriage becoming legal in more and more countries… In a perfect world it would go straight federal and that anything that’s separate or unequal would be completely abolished. But even if that were to happen, you’d still have a large portion of people who’ll have a problem with homosexuality based on religion. I think that it’s going to be an ongoing issue in the sense that it’s always going to be something we’ll have to consider, and it will always be a fight. Hopefully it will end up as benign as the way religious people feel about the rest of us, that we’re going to hell and who cares. In the current climate, unfortunately a lot of people who have the Bible on their side are also the same people who are voting and making laws and more importantly stopping laws that could really help another human being. I do see it changing in the future, but I just think it will be a strange road for it to get there.

Fun. will play a sold out show at the University Union Ballroom at Sacramento State on March 26, 2012. Learn more about Fun. through the band’s website http://Ournameisfun.com. If you’d like to know more about Revel and Riot, go to http://Revelandriot.com