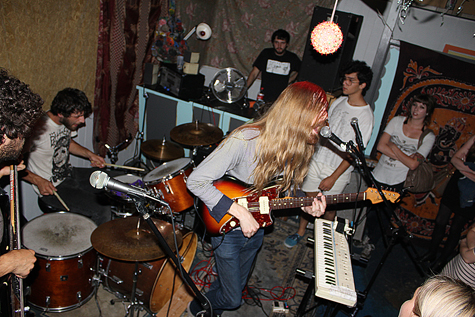 Venues so discrete we have to refer to them as “undisclosed locations” are where the raddest shows go down. These hole-in-the-wall, permit-be-damned DIY dives are incubators for garage bands ready to put their art on parade for the ultra-knowing scene. The covert show I attended on Wednesday gave discounts to members that found out about it through a taco stand–it’s that exclusive. As a member, I was there to see a night of local celebrities in the making, a 7-inch release and three teenagers from some vast distance called Cleburne, Texas.

Fungi Girls, the band from Texas, are a strong case study as to why these shows exist. The 16-year-old lads possess one solid driver’s license, at best, between the three of them. Fungi Girls’ tour is a teen movie in the making about a summer road trip without mom and dad. If that is indeed the story, I’m eternally jealous of how those young dudes must feel traveling around the country playing gigs to strangers in California. The best I was doing at 16 was overnight basketball camps at the local college.

Fungi Girls recorded is alarmingly impressive, but a further shocker is that the lo-fi sonics translate well to the live setting. I recall a few brief moments during the more shred-heavy jams, thinking it was like watching Weezer before they were signed, which is meant as a compliment. It might be tough to stomach, but there was a time when Weezer was a celebrated comparison. It’s clear the Fungi dudes’ tastes are growing beyond Woodsist and HoZac Records catalogues, as the set flourished with songs that ripped and balanced into a few sprawling numbers–they grow up so quick.

The boys of Fungi Girls played a tight set, devoid of the minor tuning lapses. Drummer Skylar Salinas was a beast in the backdrop, stuttering in the occasional light-speed drum roll with a surgeon’s precision. (Is there a Doogie Howser joke there?) The Fungi Girls played “Owsley Knows,” a favorite that is catchy beyond belief, and closed with the A-side and B-side of its HoZac 7-inch.

Comfort is a sacrifice for good entertainment. There’s no air-conditioned room for members and as I walked in, the door girl was notified that my friend and I would be the last new entrants. This meant a packed, windowless room that sat without ventilation through the dead heat of summer, would be filled to the walls with bodies. If the lineup is hype-worthy enough, attending a renegade gig is comparable to an economy pack of tampons stuffed inside a nuked hot pocket–in this metaphor you’re a tampon.

Ganglians are back from its European tour. Besides a release party for friends G.Green, the night was a welcome home to the gangly ones. The room was a pre-heated oven, but Ganglians counteracted the burn with its breezier songs, playing a new song called “My House” and “Crying Smoke.” The latter I have never seen performed live, but it turns out I’m not the only local who feels a soaked connection to it. People in the back clapped along, heads swayed to the acoustics and the throng of front row beauties danced with each other.

Feeling at home, lead singer Ryan Grubbs announced they would play a song the band wrote the night before, proceeding to pull out his cell phone to hear a recording he made, so as to remember the chords. Shouts of “play ‘Voodoo’” were honored as Ganglians closed with the request, a song I no longer recognize.

Often I’m shameless in decrying the DIY show, as it breeds exclusivity. Last Wednesday was an exception. If it weren’t for DIY shows, Fungi Girls’ touring schedule would slim dramatically and Ganglians would not have an intimate hideout to share its demos with friends.