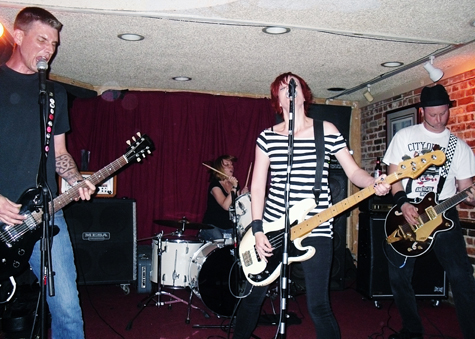 “I thought punk was dead,” someone recently said to me during a conversation about music. It’s a tiresome, ongoing debate that gets people way too worked up, and this writer has no desire to engage in it. However, for someone who hasn’t seen too many punk shows lately, the Distillery’s primarily punk lineup on June 17 led me to believe that punk music, regardless of style, is alive and well. The lineup included four bands (three of which were local): Killdevil, Joe Q. Citizen, Riot Radio and Armed Forces Radio. 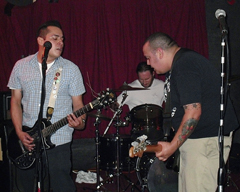 The night started off with alternative indie rock trio Killdevil, which didn’t quite fit the punk ticket, but delivered several energetic songs nonetheless. Songs like “Last Reptile” featured a signature indie rock sound, delivering distortion-packed guitar riffs as vocalist Alex Dorame wailed into the mic over the humming bass. Brothers Art and Alex Dorame have been playing as Killdevil for four years now, with Art on guitar and Alex on bass. The two praised their new drummer between songs for playing his first show with them live.

Next was Joe Q. Citizen, four guys hailing from San Jose, Calif. If a punk band can be classified as suave, these guys were proof. Their choice of gear was minimalistic, with only one pedal in sight. They didn’t need more. They commanded the stage with short, fluid pop-punk songs like “Dumb in Love” and “Diggin Out,” making their job look effortless. Guitarists Dover One and Shawn Packer strummed out swift chords over Julian Ostrow’s–whose shirt was off by the second song–fleet-footed drum tempo. “Whiskey in My Panties” was another favorite, garnering audience catcalls.

Four-piece band Riot Radio followed, the only band boasting female members that night. They are a newer band on the local music scene, and their sound fits somewhere in the midst of garage and hardcore punk. Vocalist/bassist Kat was full of piss and vinegar–who knew the petite, feathery-haired redhead could release such a powerfully raw, growling voice? It’s not easy to come by in a female vocalist. The band’s fierce drummer Maggie crashed away at the drums with gusto while Kat and guitarist Jeff exchanged nonstop shrieking call-and-response vocals, not a single word of which could be understood. Song after two-minute raging song should have left ears bleeding by the end of their set.

By the time Armed Forces Radio took the low-lit stage after midnight, the audience had thinned down to lone beer-carrying stragglers. The first song was introduced with the bassist drumming a beer bottle against his strings, leading into the song “Manifest Destiny.” Their songs had a punk/ska flavor and the Clash influence was unmistakable. More people magically appeared, gathering around the stage to watch as vocalist/rhythm guitarist Albert crooned anti-war songs like “Compassion of a Bullet” with the same raspy lisp as Joe Strummer. With beers in hand the crowd broke into a peaceful, short-lived mosh pit during “Ghosts of Babylon.” It was the most animated the audience had been the whole night. As the last song drew to an end, Albert was drenched, sweat and spit dripping down his chin.

What caught me by surprise was the fact he used a Taurus Polytone practice amp not much larger than a microwave to play the set, which he had positioned on top of a chair. Submerge caught up with him afterward to ask about it. The amp he usually plays with was in the shop, he said.

“Punk rock taught us to make do with what you have,” he said.

If that’s not a sign that punk is alive and kicking, I am not sure what is.