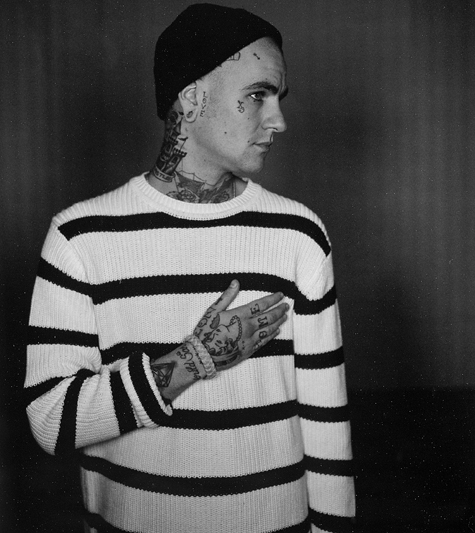 Chris Mansfield balances the light and dark with Fences

He may be as tatted up as Lil’ Wayne, but don’t let his look deceive you: Chris Mansfield has the soul of a poet with a sharp pop sensibility to match. Under the name Fences, Mansfield has recently released his folk-tinged, eponymous debut album (released on Sept. 27, 2010), which has drawn comparisons to greats like Elliott Smith, the sort of lofty comparison that could be as damaging as it is potentially helpful to launching a young songwriter’s career.

If Mansfield is feeling pressure from such an assessment of his sound, you’d never know it by talking to him. Speaking with him, he seemed cool and confident, conducting our interview as he strolled around an H&M Clothing store, saying hello to people on the street and even fielding an offer from someone who wanted to bum a cigarette from him. And if he is confident, bordering on cocky, he has good reason to be. Fences is an instantly gratifying album with sufficient depth to forge a lasting relationship with listeners.

The name of the band is taken from a play by the same name by August Wilson. Written in 1983, Fences is set in the 1950s, and its central character, Troy Maxson, is an ex-Negro League baseball player turned garbage man. The play turns a keen eye toward race relations in America. But none of this played much of a part in why Mansfield chose to take Fences as the name of his one-man band.

Mansfield admits there’s not much relevance behind the name. He says he was just looking for a single-word title. Something simple. However, that doesn’t mean it’s not open for others to interpret.

“A lot of people have tried to be like, ‘Yeah, man. It’s about the fences of life; like, the barriers set up in life.’ And I’m like, ‘Dude, no way,’” he says.
Though the name may be intentionally vague, Mansfield says he is looking for Fences to have a more recognizable sound. Using simple song structures, Mansfield has created an album that’s raw, honest and wholly relatable. It’s at once singular and universal. Perhaps that’s why his style is also so flexible. For example, Mansfield worked with another Seattle-based artist Macklemore, a hip-hop songsmith, for Ryan Lewis’ remix of the song “Outsider.” While Mansfield’s folk/pop (or “wussy pop music” as he jokingly refers to it), may seem like it would be a poor bedfellow for a hip-hop artist, the combination of the two is rather seamless and well executed.

“I’ve always kind of wanted to be that artist who has a specific sound, so people can call me if they want a certain vibe,” he says. “I wanted a distinctive personality in my vocal delivery and the tone of my voice to where if someone is looking for a certain vibe, I can go in and do it. I don’t want to sound good only in the context of my own music.

“It’s super fucking freeing and creatively gratifying to be a part of someone’s world and creative process,” he adds. “It’s really fun. It’s not like work.”

In the following interview, Mansfield talks about another creatively gratifying experience–producing his debut album along side Tegan and Sara’s Sara Quin–and discusses striking a balance between making music that’s therapeutic as well as entertaining.

I read the piece on you in Nylon, which I thought was an excellent article. You said you were writing, “love letters to millions of people who probably didn’t even exist.” With the songs on your debut, would you say that each of them is a character sketch?
A lot of them are incredibly literal and personal, almost to the point of being awkward. But then there are songs like “Sadie.” Basically, Sadie is a girl, and I use her character just as a way to pass the buck–openly sing about myself, but through someone else. It’s like the pressure’s off of you a little bit. People aren’t always going to know, but in a few of those songs, anyone who knows me is going to be like, “Dude, you’re really saying some personal stuff.” It’s great to take on a character. Sometimes you’re having the best day ever, and you take on a character who’s just miserable, and you take on the burden of those emotions. It’s like acting: You may be a millionaire, and you just ate sushi, and all of a sudden you have to step into a room and pretend your mother’s dead. That’s just the case sometimes, and other times, like I said, it’s a way to pass the buck. You take the way you’re actually feeling, and transfer it to someone imaginary. It’s therapeutic, I guess.

I always hear people say that music is therapeutic… Although it is therapeutic, I don’t want to sound overly dramatic. I actually just enjoy making music and writing lyrics. The process behind it is really fun.

The songs on your album are pop songs, but they’re not bubblegum-y. Is that something you’re keenly aware of–making sure the music isn’t too morose?
Absolutely. I won’t finish something if I even sense that it’s too corny for me. I’ve started stuff and said, “Wow, that’s such a hook.” But it’s corny for me, so I just stop. It’s a fine line, and I’m basically using my own tastes as judgment. Hopefully people have similar tastes to mine, but if they don’t, it doesn’t really matter. There are so many bands; they can listen to anything else.

Sara Quin, who you worked with, her group Tegan and Sara is really good at that sort of thing. Did you learn a lot about striking that balance while being in the studio with her?
Yeah, man. I don’t want to put too much on to that, but it was certainly a huge growing experience from the aspect of being around someone who is really successful, and walking around with her in Canada and getting recognized. Just getting a taste of that celebrity–and also getting a taste of that professionalism in the studio, like, getting up early and all that. The creative stuff, too–it was all tremendous growth for me to see that. That’s been the trend lately–being pushed a little bit more into that world and seeing how you fit. Like, can you write music for a large audience, and can you play a venue with 1,000 people? Can you fucking deal with being in a magazine? It’s such a crazy thing the first time around, but I was blessed that was my first introduction, to be with someone like her, who’s a friend, and be shown the ropes in every respect.

It’s interesting to hear you say the taste of the celebrity. Is being recognized something you’re leery of, or something you’re hoping for?
It’s kind of a bizarre transitional period. I think every artist goes through it. At first, at the majority of your career, you’re mostly doing it for yourself. Once you realize that there’s a kid in Germany who’s dressing like you or something, or loves your music so much, you realize that’s you, and how important it is to have something to believe in–something that’ll save your life. Not literally, but that shit is super important to kids growing up, and even just the average 35-year-old guy who wants to hear a nice fucking song. If you’re doing it, it’s like you’re obviously doing it for other people. It drives you–at least it drives me–knowing that people like it…

I think it’s a huge taboo to admit that you love attention, but it’s like, you just have to stop bullshitting. Don’t tell me you don’t love it when 1,000 people applaud, and you’re the only person standing in front of them. Any human being would love that. As much as you could be shy and terrified, it just feels good. It’s in our nature to want admiration. It’s definitely not the driving force, because at first it’s just you in your room, but it feels fucking great.

You are doing a video contest for “Girls with Accents.” How does that feel to hear people reinterpret what you’ve done?
It’s awesome, especially with the lyrics that I write, I feel like the kids are saying it like they really mean it. It’s not like they’re trying to learn this incredibly difficult Dave Matthews song or something and it’s like a pissing contest to see who can play the John Mayer lick. You can take the song, and you can have it. It’s been really cool to watch kids play it. Me and my girlfriend sat down and watched them, and I think the person who’s going to win is going to win out of sheer adorableness as opposed to the person who sang it the most on-key…
With the exception of a few songs, it’s pretty easy music to learn. That’s something I didn’t realize, but it’s really important to me. I love musicianship and stuff like that, but the simple songs are really more powerful…

Believe it or not, it’s way harder to just write a simple, effective song than to learn how to do a lot of things. It’s tough to do. It’s simple, but it’s not always so easy to spit those out.

It’s a very direct way of songwriting.
Especially in this day and age, everyone’s really, really jaded. I’ve heard comments on some of the cool–people who write on the blogs, angrily. Like, “What is this? Did a 16-year-old write this?” It’s hard to do those songs sometimes, because people are so jaded, they just think you’re copping out. It’s frustrating. If you want me to play really crazy fast guitar, I can do those things, but I think it’s fucking lame. 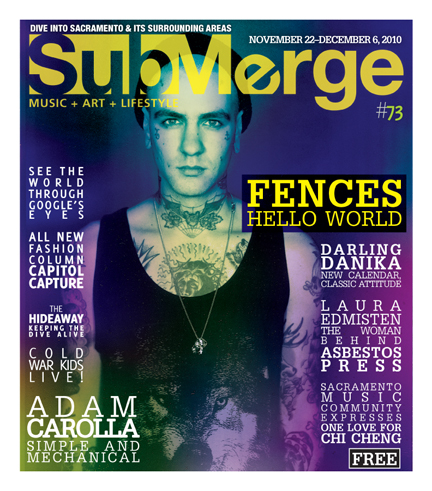