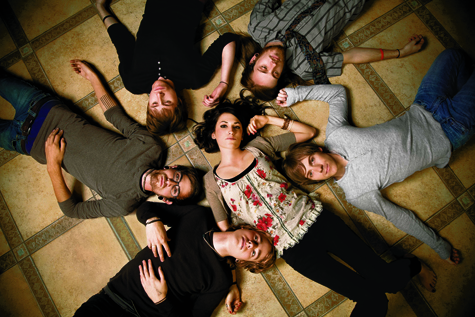 Lead vocalist Leighton Antelman of Lydia speaks humbly of his band’s success as though it’s a misnomered description. Lydia can be described as soaring indie rock adrift in desperation. Yet, as without creed as Antelman tries to write, his band continues to develop a loyal following ready to sacrifice their bodies for the band.

Originally conceived by high school friends in Tempe, Ariz., Lydia suffered the same lack of reward most bands face in that first year. Antelman said once they began playing shows outside of Arizona it felt more official. “We were pretty much your standard local band,” he said. “Playing shows every weekend and hammering through it.”

With that first year of malaise behind Lydia, the band caught a break winning a contest sponsored by Atticus Clothing. The Drag The Lake, Volume 3 compilation featured Lydia’s song “Your Taste is My Attention.” Antelman said after the feature, the stages got larger and the recognition became more frequent, but this merely meant Lydia had locked in an opening spot on tour with Saves the Day.

Amid its touring schedule, the group self-released its debut, This December: It’s One More and I’m Free. Still, Lydia lingered in the wings of indie rock discovery until it befriended Copeland frontman Aaron Marsh and released Illuminate. “The band really never had an ‘all of a sudden moment,'” Antelman said, but it does not hurt to get the stamp of approval from Copeland and get their producer Matt Malpass to work the boards on your record.

Once Marsh heard Lydia’s Illuminate demos, he insisted on being part of the record, passing the word along to Malpass. Antelman said after the first week of uneasiness, as everyone felt each other out, the recording process hit a strong stride. “I wouldn’t say it was awkward,” Antelman said. “Luckily, our personalities are very similar. It went so well that I’m 80 percent sure we’ll do another record with Matt Malpass.”

Listening to Illuminate, Malpass’ touch is present, but Lydia manages to distinguish itself from an expected Copeland carbon copy. This staple of independence is owed to Antelman and McGraw—two strong songwriters whose demos needed little guidance from Malpass.

Antelman spoke sincerely of his appreciation of Malpass allowing Lydia to shape its sound. “We pretty much had the songs done when we went into the studio,” he said. “Not to say that we didn’t obviously take advice, but we knew what we wanted going in.”

Illuminate, in its tightly woven structure, often leads to the question, “is it a concept record?” Some songs share melodies and lyrics, but Antelman insists the sophomore record is more fluid than conceptual. “It’s meant to be heard from start to finish,” Antelman said. “There are three songs that are a small piece, but the whole record has no full concept.”

Antelman said he is resistant toward concepts or messages that tag the band or his songwriting with an agenda. Lydia might motivate fans to tattoo lyrics or the album art to their bodies, but it is not pushing a logo or dogma. “I’ve never [written] lyrics to convey a specific meaning,” he said. “Some bands are Christian and they’re trying to do whatever Christian music is trying to do, but I try to write lyrics open to interpretation without being too generic.” If Antelman has one major pet peeve with songwriters it’s generic postcard lyrics.

In striving for lyrics beyond the common song, yet open to decipherment, Lydia has won a loyal fan base. It’s not worship, but it’s dangerously close. When asked if a mention of fans with Lydia tattoos was a controlled case or an epidemic, Antelman cited five cases that happened just on the last tour. “It’s flattering to me,” he said.

After Lydia’s release of Illuminate, Antelman said the fan base doubled in size. On a previous tour he said it really hit him when he was able to stop singing specific parts of songs because the crowd was singing it louder than he could muster. “I used to go to a lot of shows when I was 15,” he said. “I always thought it was cool when a singer would stop and let the crowd sing the lyrics. To actually be on the other side of that is pretty mind blowing.”

Lydia’s West Coast tour will hit Sacramento’s Luigi’s Fungarden on May 30, traveling up the Pacific Northwest. Come June they plan to be hermits for a few months. “We’re going to at least try to write for the new record,” Antelman said. “I don’t prescribe to the ‘we’re going to take a couple months off to record’ approach that some bands take. I don’t believe in writing in a set amount of time. If you do that, you’re forcing your music.”

This stop will be Lydia’s fourth in Sacramento; Antelman said each show has grown in size with each visit and he expects this to be Lydia’s biggest yet. Antelman is excited for this tour in particular as a fan of warm climates. “I like the East coast, but it’s way too cold,” he said. “I hate snow. Snow is not my thing.”