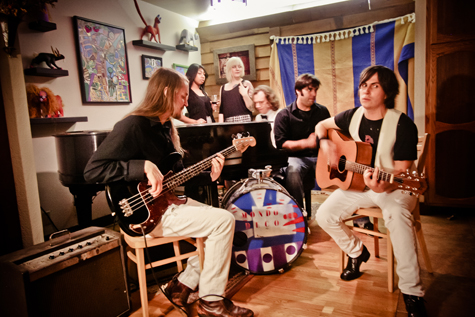 Sacramento is in the grips of another icy cold night in November. Twenty or so local musicians and music aficionados have escaped the cold, spread around the living room of an apartment talking over each other and wine.

This is a listening party, and these people are part of a tight-knit circle of friends who have been asked to be the first to hear local band Mondo Deco’s debut album, Pleasurefaith, a blend of ‘60s-esque pop rock combined with gritty rock ‘n’ roll. A friend of the band, I too stand in a circle of people as the album plays from the big speakers set up around the room.

“This is not a focus group,” vocalist Jeremy Greene and bassist Steve Robinson jokingly reassure us. They are, however, asking friends to listen for which song is their favorite.

Meanwhile, an ongoing slideshow of band photos plays on a TV screen. To hear the full sound of the album, I walk into the next room, passing the wall lined with electric guitars to one of four chairs where a pair of headphones awaits on a seat. This once average room has been transformed into a full-fledged recording studio. On the other side of the chairs is a former closet now functioning as a sound booth. To the right is a massive hand-built desk where the mixer and computer are set up.

This is where the mastered album we are now listening to was recorded, mixed and engineered by Robinson.

Only an hour before, I was sitting with three of the four guys in the group (minus drummer Billy Ewing) around the fireplace talking about the album and everything that has gotten them to this point.

It was two and a half years ago that Mondo Deco, named after the opening lyric from the one-hit wonder “Motorboat” by Jimmy Jukebox, became an official band, they tell me. That’s when “the magic happened.”

As Greene sees it, forming Mondo Deco came out of necessity. Up to this point, members have worked on their other local projects, including Matinee Idols, Wanchai Daggers, Electric Teenage Bedroom or GGM (formerly Goodness Gracious Me!).

But Mondo Deco is the band Greene and Ewing envisioned would get people moving and shaking again at local shows, engaging an audience to do something other than just stand around.

Reuniting long after high school when Ewing moved back to Sacramento from Monterey, Calif., the two began planning Mondo Deco. Greene found Robinson in his audio engineering class at Sacramento City College, and guitarist Kolton James would later be introduced through mutual friends.

The band was almost complete, except they knew they wanted a woman’s touch. They had go-go dancers and doo-wop girls in mind, or female-backed ‘70s funk bands like Sly & the Family Stone or Parliament.

Female counterparts would not only add another dimension to the songs and the live performances, but they would also provide a sexy element.

They discovered their girls soon enough. Keturah Gibson and Jessica Carter were added to the band as backing dancers and vocalists earlier this year. Gibson has more than 10 years of dance experience and Carter was recruited from a video shoot with local burlesque group the Sizzling Sirens.

As a six-piece, the band is now looking to shake up a local music scene that seems to have faded over the last three or so years.

“I think a lot of people would rather go to a DJ night, and we want to start to put on shows rather than just be the background music for people trying to get laid in bars,” Robinson says.

To sum it up, there is a widespread disinterest in live music these days, Greene adds.

This explains why Mondo Deco has had such a methodical approach to putting their music out into the Sacramento scene, whether it is in the form of an album or performance. Since their beginnings they have played a modest number of shows, perhaps 15 to 20. They have been selective of which shows to play around town and what nights of the week they fall on.

“Every single time we played, we wanted to reinvent the wheel with what we were doing live,” Robinson explains.

Along with the desire to be an attention-grabbing band, similar music taste is also a strong force in the group–throwback genres and what they agree are the greatest musical eras: the ‘50s, ‘60s and ‘70s. Names like Bowie, T.Rex, The Beatles or the Stones bear great weight.

Occasionally, newer music has been influential. For instance, James and Greene share an appreciation of The Raconteurs, which encouraged both of them to sing leads.

“I think that we all have an appreciation for what Jeremy adds as being a frontman, but we also do everything we can to bring him down from his pedestal,” Robinson says.

Keep in mind that while he maintains a straight face, half of what Robinson says is in jest.

He regains seriousness and continues, “There is a very deliberate effort for it to be a full band; everything should be a collaboration. There is an effort to make sure all of our egos are in check.”

“That’s why everyone sings in the group,” Greene adds.

Giving Pleasurefaith a listen, the vocals sound noticeably harmonized. This is because most of the vocals were recorded in the same room at the same time using a mid-side mic pair.

“We set up a couple of mics and really tried to feed off of the chemistry between us, rather than just tracking the vocals individually and placing them on top of everything,” Robinson says.

This pertains not only to the vocals, Greene points out. Most of the rhythm and beats were recorded live as well, in an attempt to keep the album as organic as possible.

Then they would incorporate effects. For instance, the tremolo effect or “wah wah” of the guitar is used in both “Lost Her Number” and “Young Man.” They recorded the guitar, sent it to another amp and upped the tremolo to give it a more “lush” sound.

On the first few listens, the lyrics on the album aren’t easily comprehensible. To write the songs, vocals are used more as instruments to match the musical arrangement of the songs.

“For the longest time I’ll just be throwing in garbage for lyrics that don’t really pertain to anything, they are just about the feeling,” Greene explains. “Cadence and melody and all that come first, and then you can piece in something that’s worth hearing, worth reading.”

Wordless melodies are then crafted into something meaningful. In “Far to Fall,” Greene and James describe an ominous telling of the apocalyptic ways in which the human race is doomed, either by the nuclear war, global warming or crashing economies.

“A fun aspect for writing lyrics with this particular group is bringing in a sense of fable or storytelling in general…things that slightly hint toward Snow White or alchemy,” Greene explains. “All of these things are greater stories that are out there and have been for thousands of years. Why not write more about them?”

Like most newer bands, the band is still in the works of defining their sound. Despite the influence of the great musical eras, they strive to keep theirs unique.

“There’s way too much era rock going on these days. People have a hard time finding their own voice,” Greene adds. “But if you can pick and choose from what you really appreciate, different genres or different eras, you can kind of put your own twist on it.”

Now the band is in the mindset of releasing another EP within the next six months. Robinson suggests that while Pleasurefaith songs bear a more classic, ‘50s, ‘60s and ‘70s rock ‘n’ roll feel, some of the post-Pleasurefaith songs they have written in the past few months may be evolving into less predictable prog-rock territory, alluding to unconventional time signatures and tempos.

Now that they are a record deep, the clock is ticking to figure out a musical direction and birth the next record, Robinson says.

Aware of this clock, the group continues to methodically consider all options–putting out singles versus EPs or full-length albums.

“As much as the Sacramento music scene might be slightly dormant right now, I think there are people out there that want new music to constantly be coming on the horizon,” Robinson speculates.

“We want there to be an effort to actually captivate and get Sacramento bands to put some kind of conscious effort into putting on the kind of show that people want to pay to see.”

Pleasurefaith is a reference to this very idea. The album is named after a phrase from the Gregory Maguire’s novel Wicked that encourages hedonism and indulgence as the greatest good.

“I think that idea that the most important thing, like the Holy Grail, is the pursuit of that enjoyment [is] an analogy of why we formed as a band,” he explains. “Music is something that we enjoy doing, but it’s also something that we want to be enjoyable to go see. We want to be a show that assaults the senses.”