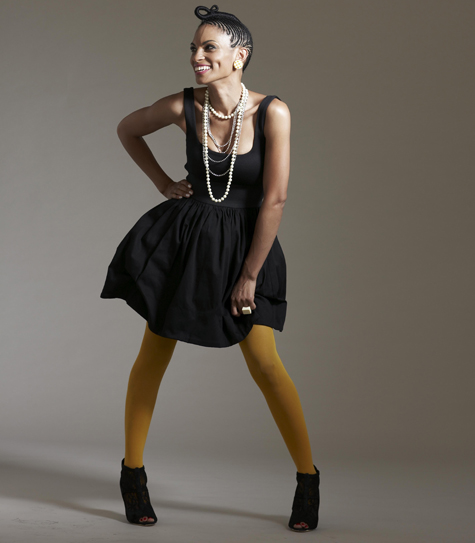 Goapele Has the Voice of an Angel, the Spirit of Oakland

Much like her music, Goapele is not a one-dimensional individual. Born in Oakland to a South African father and Jewish American mother, her lineage and upbringing provided a fountain of culture for her to draw upon. From activism to the arts, she absorbed it all and channeled her experiences through music. With an angelic voice and adventurous ear, Goapele defies genres and has continued to evolve over the past decade.

Since her debut in 2001 the sultry vocalist has gone on to release three albums. After a five-year hiatus brought on by the birth of her first daughter, Goapele is putting the finishing touches on her fourth, titled Milk and Honey. With big name producers from across the country, the album is a melting pot of sounds, from synth-driven and heavy drums to sweet melodies.Â Goapele says that becoming a mother played a big part in expanding her world and making her “more open in general.”

“I think it was more so how much bolder and empowered, and also how vulnerable I felt after the whole experience,” she says. “It has expanded my sense of love. Also, it really pushed me through the writing and recording process. I don’t feel like lyrically I’ve changed very much, except that I’m putting myself out there a little bit more on this album instead of holding my cards close.”

A soft-spoken, strong soul blessed with boundless talent, Goapele has all the tools. It’s her world, and she is the architect. In advance of her Aug. 13, 2010 performance at Harlow’s, Submerge linked up to talk about Milk and Honey and some of the misconceptions that follow her.

I heard you say in an interview how people thought you would come back and write lullabies, but how that’s not the case.
Yeah, yeah [laughs]. It’s kind of interesting in that way because it didn’t make my music softer or my lyrics more edited, it made me more open and bold.
Â
With your time off did you find you came back with a renewed energy or creative pulse?
I took my time recording this album, and I feel ready right now. After I had my daughter I took time to be home with her and take advantage of that experience, but I have really dedicated the past couple of years to craft this album the best way I can. What it is was that I was able to take more time than I ever had before because it was on my terms and pace.
Â
I feel it’s been public for a long time that Milk and Honey was your next album title. I’m always interested when a title holds for so long. Did you build down from a certain concept and sort of mold the album off of that?
Well, it was one of the first songs I recorded. It was a very sensual song, and I felt like that would be the overall tone throughout this album. There were songs I was writing at the time that had a different vibe, but I really liked the “Milk and Honey” idea. I like that it was something nourishing and sensual… I need to find more words to explain it [laughs].
Â
Did that song steer you in a certain direction?
Not really, I just kept recording. In the creative process I just like to get everything out there. I hooked up with so many producers and musicians along the way things were always changing. I would feel like, OK, I’m done, but then another opportunity would open up so I just kept going. At the end I think it will all make sense, and it will all tie together. When I first started recording, it started with my in-house producers like Bedrock, Mike Tiger, Dan Electric, and throughout the process I got to work with different people I had met throughout the years like Kanye West; Khao, who is out of Atlanta; Raphael Saadiq and others. More recently I worked with Drumma Boy who produced the next single, “Right Here.”
Â
Again, I read a quote I really liked where Drumma Boy talked about playing you his R&B stuff but you identified with the harder, crunk stuff.
Yeah [laughs]. I feel like as producers and musicians, we have to give our truest selves. That’s what I know him for, so that’s what I want from him. I can come off super laid-back and positive, and I do want my music to have a positive impact, but I’m not strictly a calm, soft and gentle person. I really like hard-hitting drums and bass lines. And then my natural way of singing is kind of laid-back, so I like how those two things fit together.
Â
You have a universal sound, but do you feel there is an element that is a direct reflection of your Oakland/Bay Area roots?
Probably the combination in my sound–that it’s raw but still beautiful. I feel like that is Oakland. It has a rough vibe but it’s gorgeous at the same time. It has the water right there, so much green, but there are other elements that can be rough around the edges. I would be happy if the violence went down, but I do like that people can be individuals and not worry about fitting in a box.
Â
Yeah, I feel like that is really personified in the “Milk and Honey” video. It’s a very elegant video, but you got the two slugs in the bottom row of the teeth.
[Laughs] Yeah, exactly. It’s not typical. We all have so many different aspects of ourselves, and in entertainment it’s like people want us to be one certain way but that’s not how most of us are as men and women.
Â
You may have just answered this, but what do you think is the biggest misconception of you?
Yeah, kind of what we were just talking about and people just wanting to keep me in the neo-soul category. Yes, I have been strongly influenced by soul music and I always want what I do to be soulful, but it does bleed out of that category.
Â
Is that a term you have come to disgust, or are you just kind of eh with it?
It turns me off, but I understand it. When you’re doing something that doesn’t quite fit the titles that are already out there then it’s easy to just make a new title, but it’s the best when you don’t have to have any title at all. Just your name. That’s what I’m working for.
Â