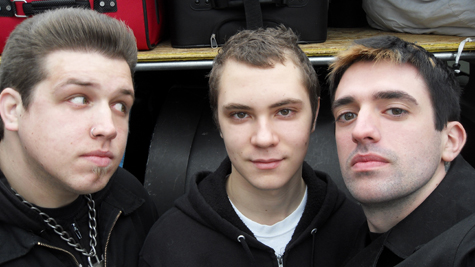 America is a great big country, and over the past 10 years, Sacramento punk rockers Final Summation have seen just about all of it. When Submerge caught up with the band, they were traveling the frozen northern United States on a tour spanning 16 days and taking them as far east as Chicago.

The group has become familiar with the highways and byways of our vast nation, and punk rock fans around the country are becoming increasingly familiar with Final Summation. When we spoke with bassist/vocalist and co-founding member Jordan Wolfe, he was getting his day started in Green Bay, Wis. His band played a sort of impromptu show the night before. No show booked in Minneapolis, Minn., meant he and the band had to make the long haul from Fargo, N.D., to Green Bay. Final Summation’s opener was “a bluesy house bar band” that pulled a three-hour set. Not the most auspicious beginning for a punk rock show, but Wolfe was pleased with the results nonetheless.

“Around 10 o’clock, 50 to 60 more people packed into the bar,” he says of the scene. “They must have burned our CD for what seemed like everyone in the city, because everyone knew the words and stuff, and they were going completely apeshit.”

“When I first started playing bass, even before I had a band, my biggest goal was to have a band and sing to a crowd and have the crowd sing it back to me,” Wolfe says. “Even when I play a show in Sacramento—even if there’s just one person in the crowd singing along, it’s the most awesome feeling in the world.”

Final Summation’s story stretches back to its formation in 2000, but its founders’ shared history dates back further than that. Wolfe and guitarist/vocalist Bear Williams have been playing music together for about 12 years. Prior to Final Summation, the two were members of The Peeping Toms. Wolfe says that at this point in their friendship, he and Williams “can have conversations without even saying anything.” It’s that sort of bond, and their shared passion for their music, that helps them keep their focus through their often-rigorous touring schedule.

“There’s certain people who’ll open a magazine or see something on TV and go, ‘Oh, I want to start a band.’ Then they start a band and go on tour, and many bands leave in one van and come home in two,” Wolfe says. “Bear and I both agree that we don’t really feel like we’re meant to do something other than this.”

In the following interview, Wolfe regaled us with tales from the snowy roads of the northern plains—not that a little inclement weather could deter them from getting to a gig. We learned that when it comes to playing shows, Final Summation is the punk rock equivalent of the Post Office, just far more bad ass.

On the road, I’m sure you pass a lot of truck stops and roadside diners. Do you have a particular favorite?
I think there are a couple that we just so happen to stop at every time. There’s not so many that stick out anymore, because, sadly, when we first started touring five years ago, the truck stops were awesome. They were independently owned and very unique. They carried whatever they wanted and did whatever they wanted. Now, because there are so many buyouts from corporations, the personalities of the truck stops are depleting. Now I just get excited when I walk into a place and I don’t recognize it, because there are so many Flying Js and Conocos and whatever all over the country.

Yesterday we stopped at one on our way to Fargo, on our way through western North Dakota. And I’m not kidding, I thought I was in the fucking ’50s. It was snowing outside, miserable weather, and this guy came up to us in one of those big Northern Exposure hats, and he’s like 80 years old and said, “Y’all want some gas?” We walked up to the storefront, and it’s all wood, like something out of the Old West, outlaw days, and inside there’s barely anything on the shelves, there’s a couple of updated refrigerator systems, and I look to my left and there’s an old guy just sitting there reading the paper, who’s probably not even a customer, he just goes there to hang out. It was straight out of a Norman Rockwell painting or something. I was juiced! I told Pat, our drummer, “This is so awesome!” and he was like, “Why is this awesome?” and I said, “Because it’s something we haven’t seen!”

It’s sad that the country is turning into the proverbial giant strip mall.
And even the bigger bummer is the ones where they keep the original storefront, and you walk in and the inside is just cookie-cutter. It’s such a tease.

There are some that are owned by Native Americans, and they have a Native American vibe and feel. It seems like they haven’t completely had to sell yet. I don’t remember where they are, but if I see anything even remotely unique looking, I’ll stop. I’ll drive past the normal-looking gas station hoping to find the really weird looking one later—the one pump and the guy out front, drunk off his ass. I’m looking for that one [laughs].

The last album you guys released came out in 2008. Now that you’ve been playing the songs for almost two years, has that changed your appreciation of the album?
Not really. Honestly, the record we did before this, To Progress or to Fade in 2005, we played those songs for a really long time, but the reason why was that it was three years of writing. The one thing that keeps happening to us is we’ll get really good momentum, but then we’ll lose a member, whether it’s our guitar player John [Powell], who killed himself, or Brian who we had to kick out, or Kiel [Gesicki] who left. Now we have Pat. We got really bored of those songs, because we played them for so long. This album, it’s only two years old, but the fact that people come and say, “This song got me through this,” or “This song saved my life”¦”

Because so many people appreciated this album, it doesn’t allow itself to get stale. The reason for us to take so long to write records is because Bear, who writes most of the music, is overly anal about everything”¦ I do the lyrics, and I’m the same way. It takes us so long, because we want to be able to look back on the record 20 years from now and still be stoked on it and not regret it or roll our eyes when we have to play a song from it. To us, this album might be two years old, but it’s still as relevant as the day it came out.

You said that you write most of the lyrics and Bear writes most of the songs. Do you usually hear the music first before you start writing or do you both write independently?
It’s a little bit of both. We’re on two different creative schedules. There are times when Bear will come to me with a CD of six songs he has created, all of which are amazing, and I’m like, “Fuck, I better get working.”

Punk is in my blood, but my parents raised me on the oldies. I listen to Sam Cooke, Chuck Berry—the roots of rock ‘n’ roll. My dad raised me on soul records, so I love Etta James, Timi Yuro”¦but on the last tour, I really got into hip-hop and songwriting. I’ve always been into it, but I dove headfirst into Public Enemy, KRS-One, Talib Kweli, because as a songwriter, I got stoked on the rhymes they would come up with. I’d be like, “Shit, I didn’t even know those two words rhymed!” or just the fact that they would put their syllables on a different beat than the snare.

When you come off the tour, you’ll have a couple of 7-inch release shows in Sacramento and Stockton. Could you talk about the songs on there?
“Arizona Drive” we’ve been tossing around for a while. Bear wrote that in 2006 while we were writing A New Approach, which is why it has that same feel, and we were actually going to put it on the next record, but so many people loved that song, but Bear was like, “No, I’m going to put it on the next record.” And I was like, “Dude, we’re taking too fucking long for the next record”¦” We were going to play it at a show one night and I said, “Here’s a song a lot of you like, but you’re going to have to wait for two years, because Bear won’t go into the studio and record it.” Afterward, Bear was like, “Fine, we’ll go into the studio.”

That’s a song that Bear wrote the lyrics to and sings. It’s about a tour we went on in 2005 and we were driving through Arizona, and Bear got really sick. We’re the kind of band that won’t cancel for anything. We could break a foot and sit on stage. I had a stomach flu one time for three days in Texas, had a show every day. I was throwing up until I went on stage, and I’d run to the bathroom as soon as we were done. Bear was in a hotel room, because he was pale and sweating and stuff, and we had to fly him home”¦ It bummed him out that we had to throw in the towel for the first time.

“Fear of Falling” is a song that I wrote on the tour last summer”¦ I was listening to a Sam Cooke record and the lyrics just started popping in my head. It was going to be a tour song, but for about a year in 2007, our focus was entirely too much on business—trying to get signed, and get sponsorships and working with bigger bands and getting bigger tours. I don’t want to talk shit, but there are a lot of bands out there that I don’t think are doing it for the love of music. I think they’re just doing it for fame. I think it’s a bummer. I don’t think music is as genuine as it once was. The last verse of “Fear of Falling” is put in a metaphorical sense, but it’s about how it just bums me out that I can’t trust my peers. Not everybody, but there are a lot of bands that are just really sleazy”¦ I know everyone would like this to be their daily career, but that doesn’t mean you’ve got to fuck one another over and step on each other just to get to the top of the totem pole.

Final Summation is turning 10 this fall. Have you been getting nostalgic over the band’s beginnings?
I don’t really know. I don’t think it’s set in yet, because my biggest thought process is getting the summer tour booked and getting really good shows. It’s one of those things that when I do say it out loud, I’m like, “Holy shit, Final Summation’s been around for 10 years.” My mom always raised me as not a hoarder or pack rat, but totally as a nostalgia junky—keeping pictures and all sorts of shit. I have like five photo albums at home just full of archives and flyers and photos and stuff like that. We’ve never really forgotten our past. I think with turning 10, we’re more concentrating on the future than going back to the past. 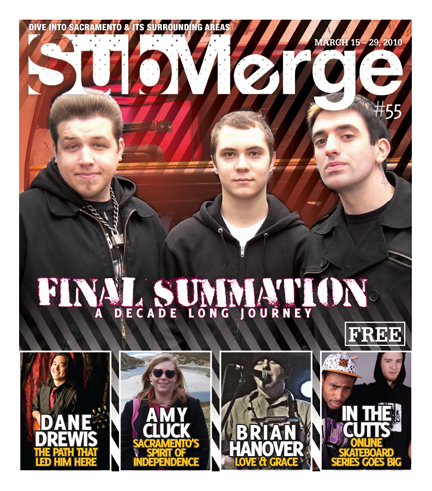