One Block Radius rises out of The Dump 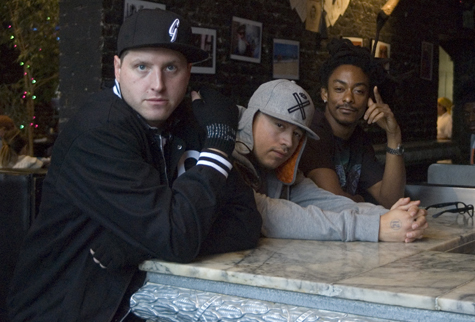 For seven years, One Block Radius’ sound has come forth from one location in North Hollywood, The Dump. It’s difficult to imagine recording in such a claustrophobic trash heap littered with Monster Energy cans, discarded potato chip bags and Del Taco wrappers, but the beginnings of OBR trace back to original members Marty James and MDA living in their trashy workspace.

It is one of the least glamorous tales with an attachment to Hollywood that you will read. James and MDA no longer live in The Dump, but it has remained the group’s recording temple. “Right now it’s at a new level of stank its never reached before,” James said. “I think the dumpier it is, the harder I work.”

The philosophy is common for producers: stop showering and grow a questionable moustache, anything to keep people out of your workspace so you can create in isolation. James knows that a gaggle of groupies won’t try to hang out amid the junk food dregs and lingering stale stench. “There’s no room,” he said. “Me and two other people can sit in there if I move some boxes around. At the same time, I keep connections with other studios should a more established artist come through. You can’t really be asking E-40 or Sean Kingston to come through The Dump.”

Recently Marty produced music for Motown recording artist MoZella for her The Straits EP. James said she brought her guitar to The Dump and even though she clowned on it, she survived the stay. “There’s no frills,” he said. “It’s where men come to make records. There’s no foo-foo bougie shit in there. It’s just get down.” It’s a workspace he intends to always keep, even if it’s merely for nostalgia.

With third member Z-Man living in San Francisco, the group clocks ridiculous travel hours that include James producing a foundation for a song at The Dump, then taking it to Street Symphony studio in Fremont, Calif. James said he values those trips to the Bay as opportunities to sink into artist mode. Living in Los Angeles, he’s consumed with being in collaborator/writer/producer mode. “I’m from up that way so I click into my artist mode,” he said. “It snaps me out of the songwriter hustle I’m always in.”

Originally from Chico, Calif., Marty earned his stripes with trips to Vallejo, Calif. Only a teenager, he worked in Rated Z studio, while they were recording ’90s hip-hop group N2Deep—maybe you remember “Back to the Hotel?”

“I got in with those guys by sending packages to any address I could find,” James said.

N2Deep producer Johnny Z took James under his wing, loaning out his MPC in the studio and allowing James to take his SP1200 back to Chico. James spoke of this era in his life with great significance as the engineers and music clerks he met in Chico lacked the knowledge of hip-hop production he gained in Vallejo. “I’d be playing them Ice Cube songs, and they’d give me all kinds of wrong information,” he said. So wrong they invented (only in their minds) an instrument called a “synchronizer” to explain the tricks of the trade. “I was going to music stores asking people for synchronizers,” he said.

James moved to Vallejo, forming his own group, Scapegoat Wax. The group released a few underground records until he moved to L.A. in 2001 and began his conquest of the industry. One Block Radius dropped its debut Long Story Short in 2005. The exposure from the debut, a mixtape and the “You Got Me” single led to a major label signing to Mercury/Island/Def Jam—a short lived experience.

With the terrain of the industry drastically shifting, major labels are essentially lost without a paddle as to how to properly promote a record. Still relying on radio play and other archaic promotional tools, OBR never had a chance at national success. James has no ill will toward the dissolution of the contract. “We were doing pretty good on the charts,” he said. “When momentum started to slow down we put our album out. It came and went fast. We probably should have held off, but there was a lot of good that came out of it.”

James said it was a learning experience, that given his prior history, he should have known better. For him, it was easy to get caught up in the whirlwind and excitement of being signed after years of independent grinding. Major labels aren’t suffering from an abundance of clients, but understaffing. It’s inconceivable that a rep can manage more than three acts in a day, let alone 15, which does happen! It only took a few months of major label life to recognize that the contacts James had established on his own would be all he needs to build a career. “The greatest part about the industry now is music can travel,” he said. “The first album still has a word of mouth attached to it.”

James recently inked a deal with DAS Communications, which handles The Black Eyed Peas, to manage OBR. He said he’s acted as his own manager throughout most of his career, but saw this as an opportunity to focus more on working in the lab, while his management handles his Twitter, Myspace and Facebook accounts. Because that’s the direction of the industry; being accessible digitally and not just having music, but being a personality in those vehicles. “It’s a challenging time to be an artist,” he said. “I think what’s happening is, no one is getting rich anymore and so the people that really want to be in music are the ones that stay in it.”

James is optimistic for OBR in this new world of music. He sees it as a singles driven market that rarely involves a well-conceived album. He’s not entirely turned off to a record deal as he is still in talks with people, but he said securing a record deal is low on the group’s priority list. “A group like us who is still just buzzing, we need to drop multiple singles,” he said. “We’re too self-sufficient to bother with a deal unless we are looking for radio play. I’ve yet to see a deal that does something for the group that we’ve not already created ourselves.”

This has been the core plan. James continues to build his name as a writer and producer, rubbing elbows with industry elite, while OBR works in the wings crafting catchy singles like “You Got Me” and its latest, “Broke Ass Holiday.” The single is a positive song about being grateful for what you have. For a group that began in a place called The Dump to still speak positively after seven years of being relegated to that spot, speaks to a humble presence in its members. 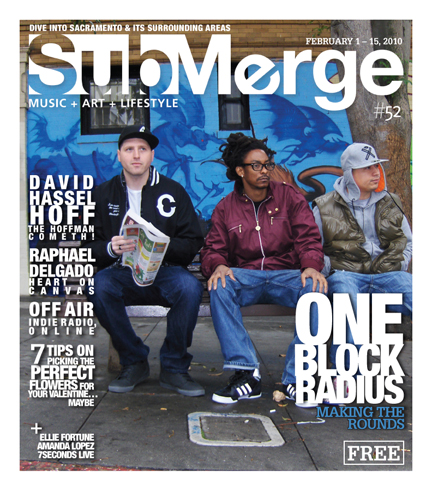 One Block Radius played The Blue Lamp on Feb. 10, 2010. First Place and The Freshmen also preformed.