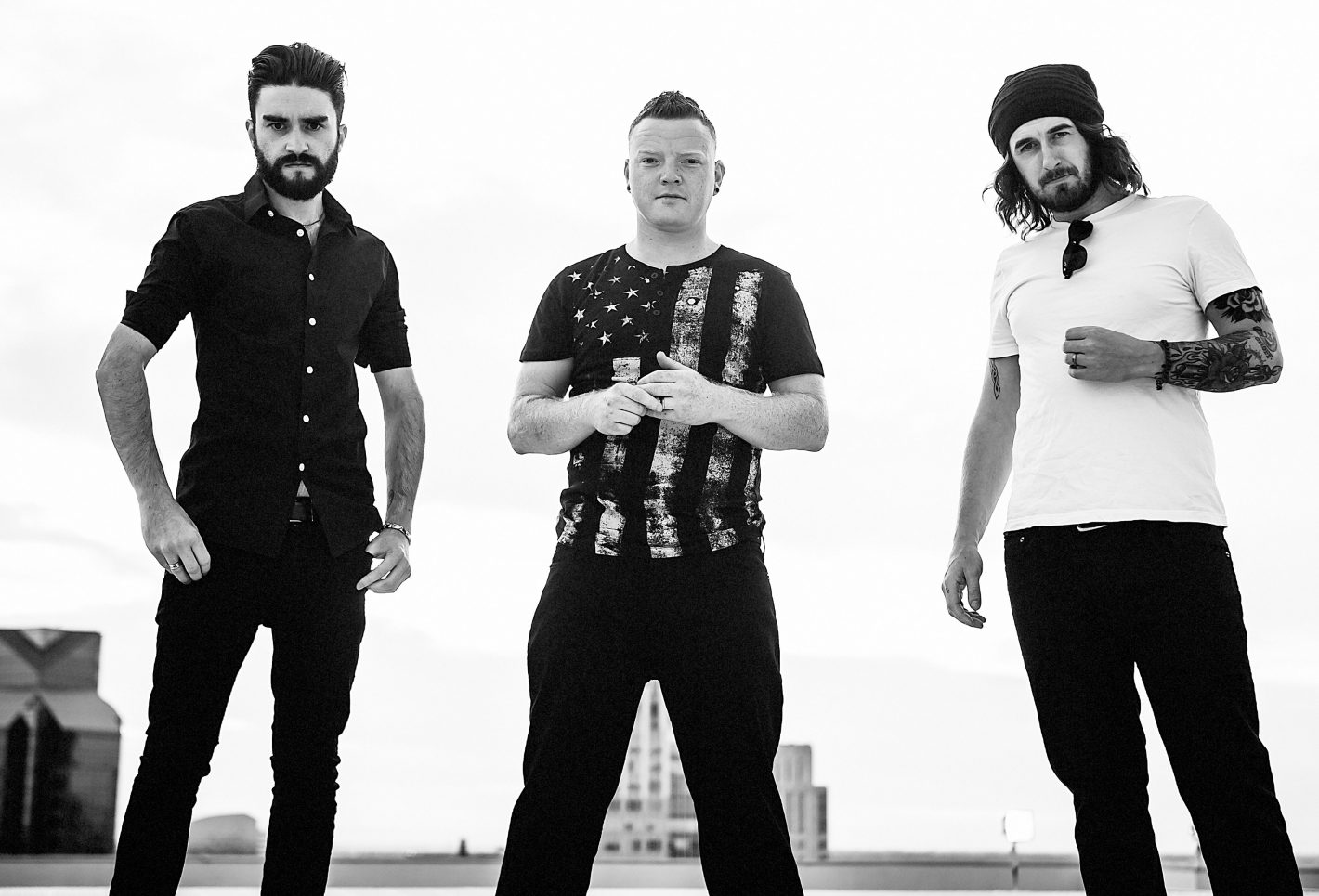 The most common reason for starting over with a blank slate is for a second chance. People hit rock bottom, fail, regret choices, run away from their own crimes or the crimes of others. However, sometimes the answer is much simpler.

In the case of Irish rock outfit ONOFF, it was many things, but one thing it was not was rock bottom. The band came to the United States around 2013 after much success in Europe. ONOFF’s first two albums charted very well in Ireland, landing them on bills with bands such as Fall Out Boy and Dropkick Murphys. Their first European-wide release, Don’t Take Our Word for It, sold more than 130,000 copies, according to frontman Paulie Daly.

Yet, after a few years of touring in support of their first successful album, the trio—consisting of Daly, drummer Stevie Bogan (also known as Stevie 10 Bears) and bass player Dave Hurrell—sold everything and headed to the Golden State.

“When we were in the height of the tour in Europe, we released an album, in 2009, and it was very successful for us so we ended up on the road for almost three-and-a-half years,” said Daly in a phone interview with Submerge. “When we decided to go back to the studio to write the next record, I started traveling to California because I had some time off. It was either move here to California with the band, or move to Berlin, and everyone here speaks English, and our music is very American influenced. We talked, and if we come here, it is the biggest music industry in the world, so if you make it anywhere, here would be the place to do it.”

The trio didn’t come with some grand reputation, either. While they did find success in Europe, the fanfare had not made its way across the ocean. A change of scenery for the band also meant a completely clean slate, leaving behind all they had spent the previous decade building.

“It was like pressing the reset button,” said Daly. “We had a lot of success in Europe, and when we came here I think we only had a small group of friends that really knew about what we were doing, so we built our foundation from the ground up with nothing.”

When talking to the band, however, you don’t get the impression they spent much time complaining. On the contrary, it appears they spent little time at all in anonymity. From the moment they arrived, they were greeted by California with open arms, as evidenced by the story they tell of their first show. When the band first arrived, they were staying in the small town of Sutter. Soon after arriving, they began writing and rehearsing for a new album, and they started to draw attention to themselves.

“Everyone in this little town decided to follow the music, because it was just such a small little community, and all of a sudden there’s a fucking punk rock band screaming their heads off,” said Daly. “Eventually, there was an auto shop on top of one of the streets, we met the guy and he goes, ‘I normally do a jam session once a month, if you want to come down and play you can play.’ We had a really loud PA system. I think the community of Sutter is probably about 3,000 people, and I say about 800 people came out that night to see us. In the night time, there’s not even streetlights in this town. So, once we started playing, 800 people followed the sound. All of a sudden, everybody knew about us, and all the local bars started calling us.”

ONOFF quite emphatically hit the ground running, and they’ve been playing all over California ever since they arrived. The band has played a diverse array of venues, many of the locations having been plotted out prior to their arrival from the Emerald Isle.

“As we were making the decision to come here,” said Bogan, “we looked at venues we wanted to play and that were realistic, places that bands we admire and we look up to and we listened to that have played here. We got to play these places. Bottom of the Hill, Slim’s, Whiskey a Go Go … All of these places that we sort of went ‘you know, that’s where it all happens.’

“Even the Gilman in Berkeley,” continued Daly, “where some of our favorite bands—the Offspring, Bad Religion—they’ve all played these places. There was this great punk scene that was super influential to us as teenagers growing up, and that was partially the reason we decided to make the move. We felt like we needed to pay our dues in the scene that influenced us. Every time we play these places, we play some of our best shows.”

ONOFF released their fifth album, Reborn, earlier this year—a fitting title, given the circumstances. The band had no issues coming up with material, explaining that they have written plenty of mostly finished songs, and as they’ve been together since the age of 15, the songwriting process comes easy. On the other hand, after five full-length albums, the band has come across new, unexpected issues.

“The thing is, most of the time in the festival circuits and stuff, you’re given 45 minutes,” said Daly, “and this album we just released is our fifth studio, and so how do you carve up all these songs into a 45-minute set? So now when we write new stuff, it’s almost as if you’re writing for the set. It’s like our live show is compact with the greatest stuff we can possibly do as a band, so when we write stuff new, it’s almost like we’re trying to compete with the songs in existence. I used to get mad about bands that would just release EPs and weren’t willing to commit to a full album. I get it, it’s hard to write an album worthy enough, with no filler. I think we have a lot of different concepts of songs that we want to achieve that we still haven’t attempted to write yet.”

The new album is much like the band’s previous work: hard, grinding guitar parts, passionate, aggressive vocals and memorable, anthemic choruses and punk rock beats. Gun to the head, they have a lot in common with bands such as Rise Against. Their own influences, however, are far-ranging.

“We’re all from different musical backgrounds,” said Bogan. “If you were to sum us up as a full band it would maybe be The Police, The Eagles, Fleetwood Mac and Rush. But then to broaden our horizons, generationally, because I was that age, I grew up listening to Green Day. And I remember the first Offspring CD I ever heard; the same with NOFX for me as a drummer. I had a lot of energy growing up and when I directed that at the drums, it was the punk that grabbed me. My karaoke classic is Bobby Darin’s ‘Mack the Knife,’ and that’s from the ‘50s. I love the swing stuff … we all listen to everything, you know?

“I think the common ground is that we wanted to recreate something that we can plug in and play,” Bogan continued. “We’re not hiding behind backing tracks. When we were recording the album, we were very aware of being able to do it live. Anybody that’s heard our record or seen us live knows that we’re a lot better live than we are on record. The reason being that it’s thought about … there’s one guitar track, there’s one bass track, there’s one tom track and there’s our vocals, there’s a little bit of frill here and there album-wise, but we can recreate it, and that’s how it’s written.”

When questioned as to whether they would return to Ireland—in either the near or far future—ONOFF’s members were clear about one thing: Right now, California is their home.

“We have family here now. I have a daughter, an American daughter,” said Daly. “It’s great to be able to operate in this scene we’re a part of … We will always come back here. Our house is here, our car is here, my wife is here. There’s talks about going to Asia next year, back to do tours in Europe, but it is just touring there and we will come back home.”

ONOFF will play live at The Boardwalk in Orangevale (9426 Greenback Lane) on Sept. 15, 2017. Also performing will be Tonic Zephyr, California Child and Nothin’ Special. Tickets for this all-ages show are $10 and can be purchased through Boardwalkrocks.com. Learn more about the band on their Facebook page or on their website.