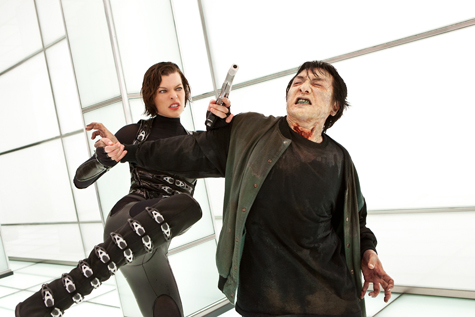 There’s no telling how many Resident Evil movies there have been. OK. That’s a lie. I looked it up on the Internet, and the latest, Retribution, is the fifth in the series. Since the first flick based on the popular Capcom video game premiered in 2002, Sony Pictures’ Screen Gems has dutifully popped out a new one every other year. Clearly, this isn’t high brow entertainment, but having seen every film in the series–or at least I think I have, they all sort of blur together–I’m looking forward to 2014 for Resident Evil 6.

It’s nice to have something to depend on. It’s a crazy world out there. Not as crazy as the world in the Resident Evil movies–and thank God for that, what with the zombies and mutants and corporate-funded death squads and all that–but it’s nice that there’s something predictable out there. Paul W.S. Anderson has been at the helm for each movie in the series, be it as a writer, director or producer, or as was the case in Retribution its most recent predecessor Afterlife and in the very first Resident Evil, he’s served as all three. It’s what’s given this series the consistency that’s missing in other fast food movie franchises.

In addition to Anderson, Resident Evil also has its star, Milla Jovovich, who has played the role of Alice in each of the films. Jovovich turns 37 this year, and while that’s not old, it may as well be 105 in Hollywood starlet years. Still, the Ukranian born actress/super model looks remarkably fit. And she sort of has to be given the wardrobe Anderson and company cram her into. She’s still as spry as ever, performing admirably in Retribution’s many high-powered action sequences, and looks damn good doing it.

Jovovich is surrounded by an equally buxom supporting cast, including Li Bingbing as rogue Umbrella Corporation op Ada Wong, Michelle Rodriguez in dual roles and Sienna Guillory as Jill Valentine, Alice’s former ally turned insanely powerful zealot of the Red Queen, a being of artificial intelligence bent on the extinction of the human race. 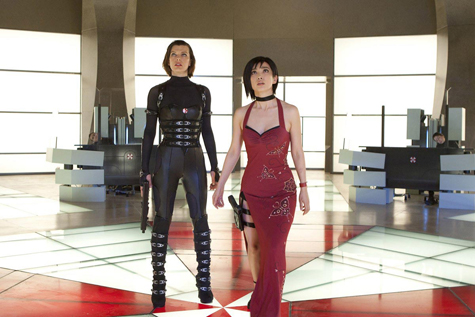 There’s a story here, too, sort of, which picks up immediately following the events of Afterlife. As Anderson has guided each of these films, each installment plays out like another chapter in a larger story. For those who may be late to the game, Jovovich neatly wraps up the events of the previous four chapters at Retribution’s opening; however, even without the primer, you wouldn’t have to be a proverbial rocket scientist to figure out what’s going on. There’s an evil multinational corporation (Umbrella) that has been tampering with nature to make weapons. One of those weapons led to a mutant zombie outbreak, and basically that’s all you need to know. The world is screwed and humanity pretty much has all its eggs in Alice’s basket as far as survival goes.

Retribution is really more scenario than plot. After being captured by Valentine, Alice, who lost her superhuman powers at the close of Afterlife, must escape from an underground experimental facility wherein each zone replicates a major city (Moscow, Tokyo and New York (there’s even a stock “Suburbia” zone)) and houses a different bio-engineered undead threat. With the shady Wong as her companion, Alice must fight through zombie hordes and killer giants to meet up with an all-male strike team of buff dudes with machine guns.

I guess why Resident Evil: Retribution scores as high as it does here is that you pretty much get what you pay for. It doesn’t try to do too much and operates well within its limitations. Other than a nifty, snow-obscured showdown between Alice and Valentine, the 3-D isn’t anything special, but this action/horror hybrid delivers plenty of gunfire, a thrilling Indiana Jones-style (except with a battalion of heavily armed zombies) car chase through the streets of fake-Moscow and plenty of MatrixÂ­-esque fight sequences all unfettered by pesky dialogue or character development. In so doing, Resident Evil: Retribution perfectly mimics the video game experience without all the button mashing. Retribution’s ending seemed to hint at the possibility of the next film being the final chapter. In any case, as long as they keep churning them out, I’ll be there on opening weekend with a dopey, sated grin on my face. 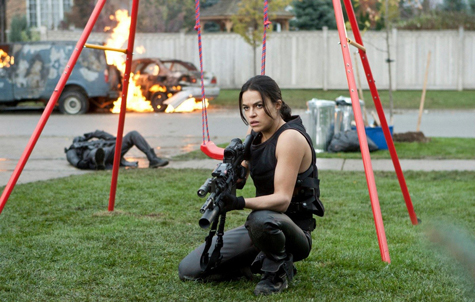